More than a hundred year from the establishment date, Huyen Sy Church (also called Cho Dui Church) is still considered as one of the best attractions in Ho Chi Minh City that you should visit once. Named after the founder of the church, Huyen Sy Church has, every now and then, been a nostalgic landmark to many people in Ho Chi Minh City because of its grand appearance and a fascinating story behind it.

How to Get to Huyen Sy Church 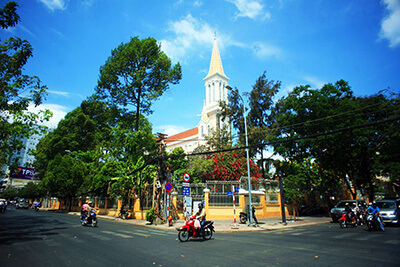 Sitting in the corner of Nguyen Trai Street and Ton That Tung Street, Huyen Sy Church always receives a great number of visitors including locals and tourists. Being really near the central district, Huyen Sy Church is only about a 10-minute walk away from Ben Thanh Market.

Huyen Sy Church is opened between any time from the first mass schedule to the last one. Even if you are not a Catholic, you can still join the followers and other visitors and admire the magnificent architecture outside the church building. 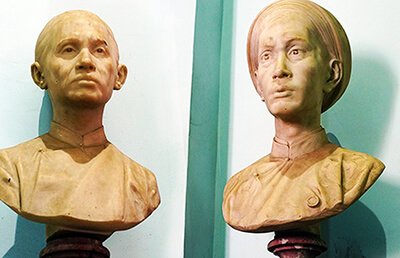 Huyen Sy's original name was Le Nhat Sy, also known as Le Phat Dat. He was one of the wealthiest men in the South of Vietnam in the 20th century. People in Saigon (name of Ho Chi Minh City at the time) usually used a phrase to remember the name of the four richest men in order of their wealthiness: “First Sy, Second Phuong, Third Xuong, and Fourth Hoa.” His granddaughter was also a famous figure in Vietnam history, Marie-Theresa Nguyen Huu Thi Lan, or Queen Consort Nam Phuong, the first and primary wife of King Bao Dai (the last emperor of Nguyen Dynasty).

Although being well-known as a prosperous man, he was born in a poor family from Tan An, Long An Province, who later immigrated to Saigon. To support his family, he made his living mainly by paddling small boats. He was then fortunately adopted by a pastor as a godchild and moved to Penang, Malaysia to study the priesthood. And as a result, he was fluent in French, Mandarin, Latin and Chu Quoc Ngu (Romanised Vietnamese).

After finishing his course, he returned to Saigon and worked as an interpreter for the French authorities. Thanks to the linguistic competence, he gradually got some promotions, and eventually, in 1880 he became a member of the Cochinchina Colonial Council, which had given him a capacity to acquire large tracts of land from which he made his fortune later. He had many children who then inherited his possession and continued funding for Catholicism in Saigon.

Joined by his wife, Huyen Sy decided to spend a large amount of his fortune to fund the agriculture and preaching activities by constructing many churches in Saigon. He contributed the land and donated one-seventh of his prosperity to build the church.

Designed by Father Charles Boutier who had previously designed many churches in Saigon, Huyen Sy church began its construction in 1902 and finished in 1905 after Huyen Sy passed away in 1900. It was named after him as a way of paying him respect. Besides Huyen Sy Church, Huyen Sy also gave great financial support to construct Chi Hoa Church and Thu Duc Church. His son later funded for building Hanh Thong Tay Church. 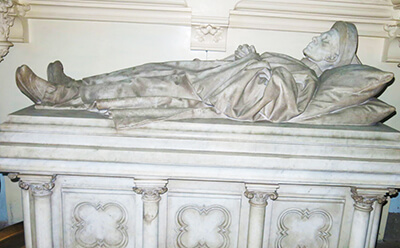 The Outside of Huyen Sy Church 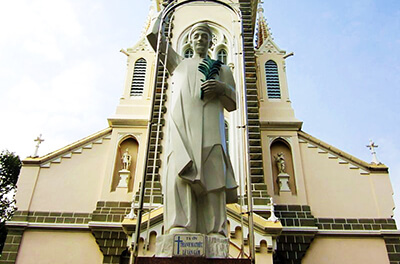 Huyen Sy Church with a large and breezy space surrounded by a lot of trees will definitely bring you a pleasant feeling. From the main entrance, you can easily spot a statue standing in front of the cathedral. This statue is of St. Matthew Le Van Gam, who was a priest and beheaded in the Cho Dui area for his action against the order from Nguyen Dynasty which expelled a fellow priest to Singapore. 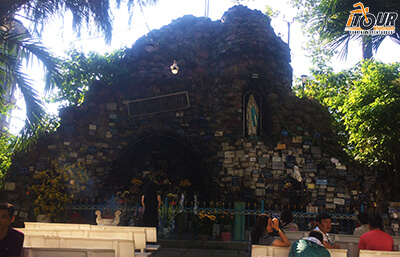 There is also an area outside to honor Our Lady of Lourdes, which was built in 1960 for people to come here and pray for health. A lot of flowers and incense are left here to show the appreciation to Our Lady. In 1905, the 57-meter-tall bell tower with four bells which were made in France was delivered to Huyen Sy Church. 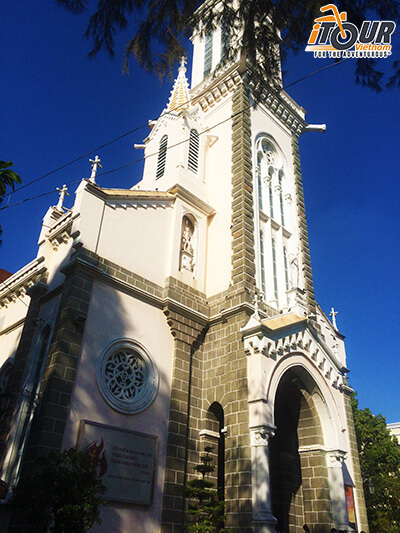 The Inside of Huyen Sy Church 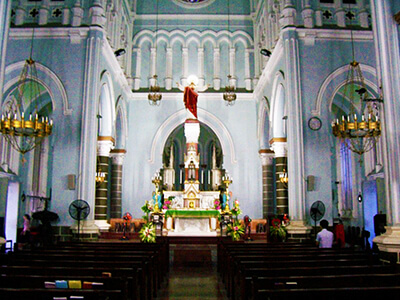 Huyen Sy Church building and the main poles were made of Bien Hoa marble, matching with the Gothic architecture. The walls are decorated with many colorful stained glass panels from Italy. There are also many Saint statues inside the church as well as embellished into the walls.

The total area of about 720 square meters along with two long rows of benches for the mass time, but sometimes this space inside the church is not enough because the number of followers is too many, especially on special occasions. 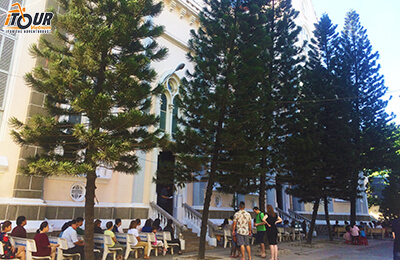 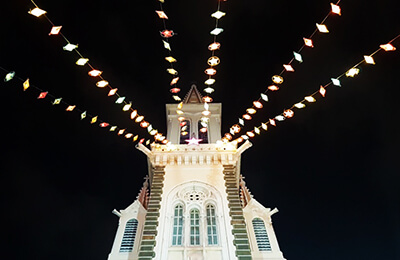 Besides the famous Notre Dame Cathedral, Huyen Sy Church is one of the best churches in Ho Chi Minh City for you to explore and know more about Catholicism in an Eastern culture. The Catholics, at the same time, keep their belief in Jesus and maintain the traditional way of Vietnamese life.

You can also gain some knowledge about how one of the four richest men in Ho Chi Minh City's history made his fortune and decided to contribute most of his prosperity to the religion. Or simply have a tour around and enjoy the breezy atmosphere under the sun while gazing the beauty of this ancient church.

Read more about other attractions in Ho Chi Minh City.