Who Were the Hung Kings? Vietnam is about to celebrate a popular holiday in the country which is Hung Kings Commemoration Day. You may not know exactly what date it is as it is determined by the Lunar calendar. Every year, on the 10th of March according to the Lunar calendar, Vietnamese enjoy a day off to commemorate the Hung Kings. 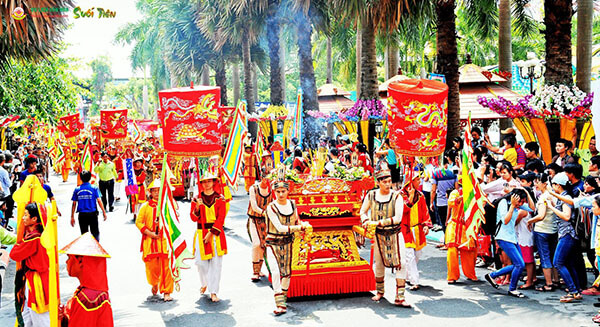 The Story of the Hung Kings

Before the Hung Kings, there was a folk tale of Lac Long Quan and Au Co which is believed to be the ancestors of Vietnamese people. Lac Long Quan was the son of a Dragon from the ocean, and Au Co was a fairy and resided on earth. They came together and lived together in the mountains. After a year, Au Co gave birth to a sack of a hundred eggs which then hatched into one hundred kids. 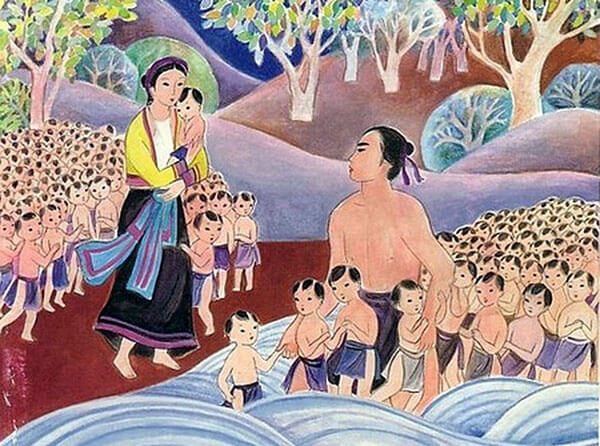 After a while living together, they had to separate due to the different instincts of living. Then Long Quan took 50 children with him down to the sea while Au Co stayed in the land with the other half. Subsequently, one of their sons became the king of the country and named the country “Van Lang”.

The country under the 18 Hung Kings rule accomplished a lot in terms of agriculture, horticulture, hunting, and making handicrafts, etc.

The Hung Kings dynasty ended in 258 BC when An Duong Vuong took over Van Lang and established a new country called Au Lac. Fairy - Dragon parents in the legend

Because of the legend told above, Vietnamese always take pride in having the Dragon - Fairy roots. Hung Kings are the heroes who set up a steady foundation for the country. The date March 10th Lunar calendar is to memorialize the efforts of the Hung Kings who established and developed the country through generations.

The festival is held every year at Phu Tho temple mainly and in more than 1400 temples across the country. The worship of Hung King activities in Phu Tho was recognized as Intangible Cultural Heritage of Humanity by UNESCO in 2012. 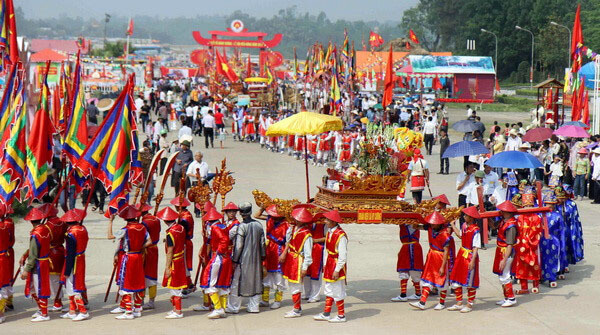 The festival consists of 2 main parts: the ceremony and the festival. Vietnamese people will prepare offerings to express gratitude to their ancestors (the Hung Kings). The offerings include Banh Chung (sticky rice cake), a must-try Tet food, Banh Giay (crushed sticky rice pudding).

According to Vietnamese legend, King Hung wanted to choose a son to succeed the throne. He summoned all of his sons and said that whoever could bring him the most precious offering to the altar to worship the ancestors would be given the throne.

All of the princes traveled throughout Vietnam in search of the valuable and most exotic foods to offer to their father, except Lang Lieu, the 18th prince, who had no idea where to begin searching.

One night, he dreamed of a genie who told him that "the rice grain is the most precious thing on earth. You use the glutinous rice grain and make round cakes symbolizing the sky and square cakes symbolizing the earth. The square cakes will have fillings made of beans and meat, and you will use green leaves to wrap the cake, symbolizing the love and protection provided by fathers and mothers to their children." When he awoke, Lang Lieu was delighted and prepared the two kinds of cakes instructed by the genie.

When the day of the competition came, King Hung thoroughly examined the offerings of his sons but was not entirely satisfied. However, upon tasting Lang Lieu's cakes and hearing his explanation, the King congratulated and chose him to succeed in his throne. Since then, the King and all of his subjects started making square and round glutinous rice cakes to offer to their ancestors on special occasions and particularly the Tet holidays. Nowadays, these cakes are still a specialty throughout all of Vietnam.

After the ceremony comes the festive part, which is a procession that lasts for 3 days on Nghia Linh mountain. Before the ceremony occurs, a competition of sedan chair between villages will be held to pick out the winner. The victor will earn the opportunity to lead the procession up to Phu Tho temple. The vibrant atmosphere of the Hung King festival

The date March 10th Lunar calendar is to memorialize the efforts of the Hung Kings who established and developed the country through generations. Many altars are built across the country so that the Vietnamese can pay tribute to the Hung Kings. 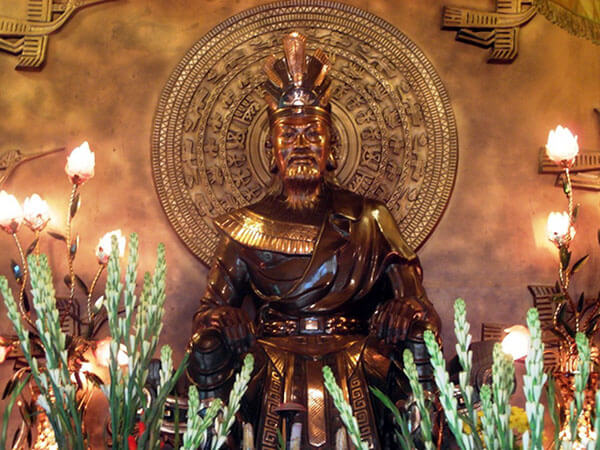 Temple of the Hung Kings

The temple is located inside Tao Dan Park in Ho Chi Minh City. Conclusion of the Hung Kings

Although the stories about the Hung Kings are considered myths, Hung Kings’ Commemoration Day plays an important role in Vietnamese spiritual life. On this holiday, there are many festivals that you should take part in to develop a deeper understanding of Vietnamese culture.

If you haven’t got any idea what to do on this very holiday, check out our Private City Tour.

very nice photos of the temple