Where to Spend Christmas and New Year’s Eve in Hanoi Traditionally, Christmas is not seen as a public holiday in Vietnam. Even though Catholicism is one of the major religions in Vietnam, it took a long time for Christmas to be celebrated widely and publicly due to the complications of religious practice during the Vietnam War. Likewise, New Year's Eve is not a long-established tradition as the Lunar New Year has always been a deep-rooted holiday for the locals.

However, as the years go by, more and more people welcome the holiday as it makes for a perfect occasion for friends and family get-together. And for expats and foreign tourists coming to Vietnam's capital during the holiday season, there is no lack of jolly activities to enjoy. We have compiled below a small list of where to spend Christmas and New Year's Eve in Hanoi.

Where to Spend Christmas and New Year’s Eve in Hanoi: Places to Celebrate Christmas

In Hanoi, the weather will be much colder compared to the Southern part of Vietnam, and the temperatures will continue to drop towards nightfall during the holiday season. Be sure to pack a winter jacket to brace the chilly air when taking an outing around the city. The holiday spirit can be easily observed as the city is brightly decorated with festive lights at every corner. However, some places are worth making a detour towards to enhance your experience. 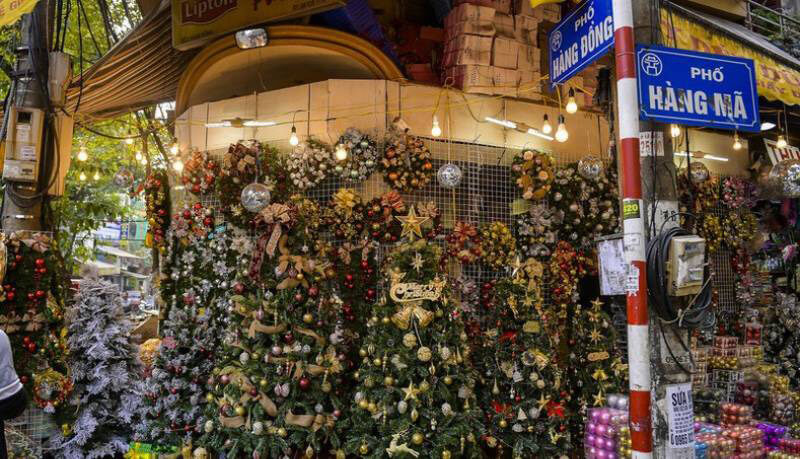 Christmas trees and ornament on the corner of Hang Ma Street

Located in the heart of Hanoi’s Old Quarter, Hang Ma Street is lavishly decorated with Christmas lights and ornaments. Filled with vendors and restaurants displaying brightly attractive storefronts, taking a stroll here will invoke a feeling of Christmas cheers. 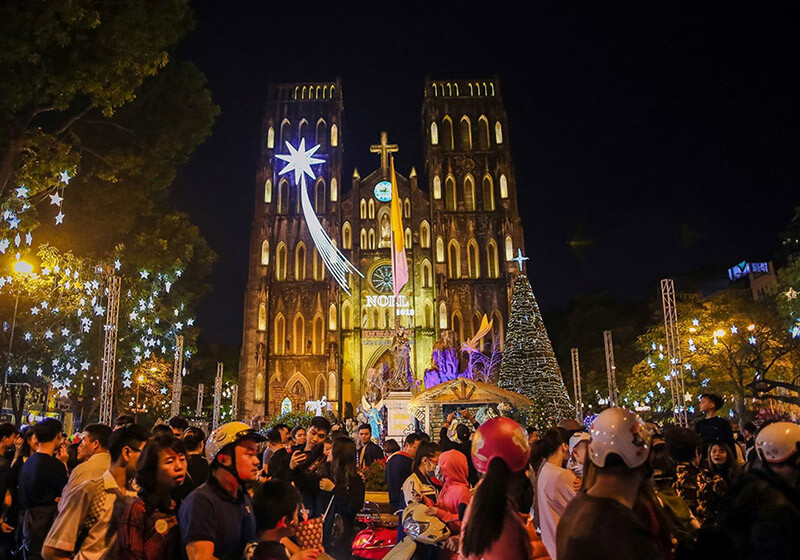 The famous St. Joseph’s Cathedral always draws a crowd on a daily basis but is especially popular during the Christmas holiday. On Christmas Eve and Christmas night, you can expect a more extensive gathering of locals and tourists here looking to be a part of the celebration. 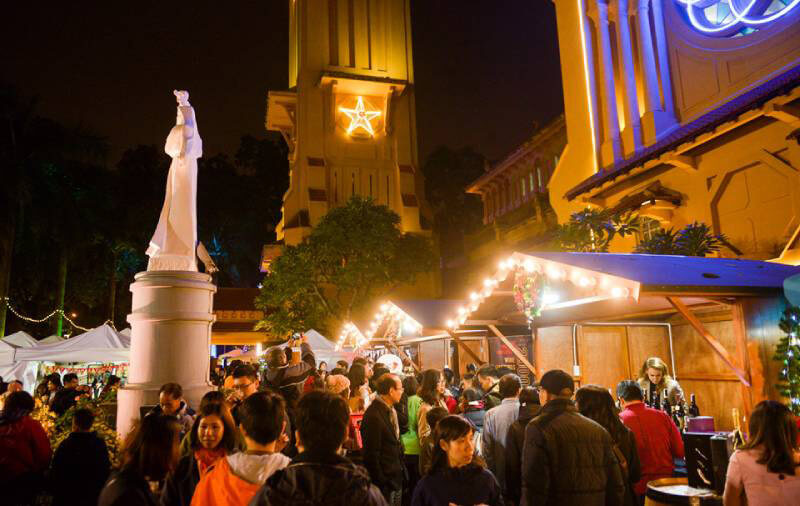 At Cua Bac Church, you can find a festive German Christmas Market hosted here during the holiday season. It has many charming stalls selling a variety of Christmas food and handicrafts. The highlight here is a Christmas concert performed by the National Symphony Orchestra and local choirs of the city.

The market is open from the 13th to the 15th of December with the concert held on the 19th. There will be an entrance fee of about US$ 5. 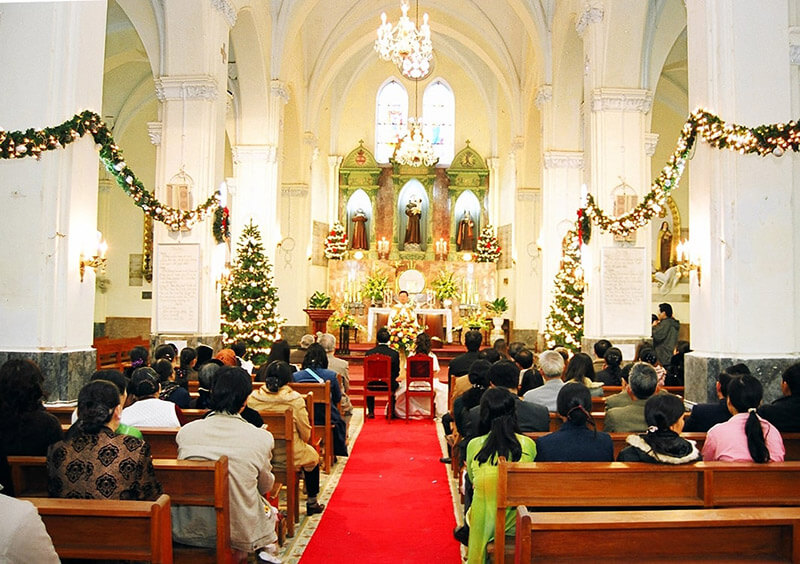 The interior of Ham Long Church during the Christmas season

Ham Long Church is a suitable alternative to the vastly more crowded St Joseph’s Catherdral during the holiday season. Ham Long Church is more fitted if you want to experience a more local atmosphere during Christmas.

Where to Spend Christmas and New Year’s Eve in Hanoi: Activities During Christmas

In a bustling city such as Hanoi, there are plenty of things to do during the Christmas season such as enjoying a musical performance. During Christmas Eve and Christmas night, the Hanoi Opera House will have a Christmas line-up to expect. Holiday shopping is a common activity as many holiday sales are happening and is also a great way to see more Christmas decorations. Shopping centers in Hanoi such as Parkson, The Garden Center, Vincom Plaza Tower, and Trang Tien Plaza are some notable mentions.

Having a hotel Christmas dinner is a luxury experience that is definitely worth the price. Some of these fancy dinners are accompanied by a Christmas performance to ensure that your evening will be a spectacular experience.

Where to Have a Christmas Dinner in Hanoi 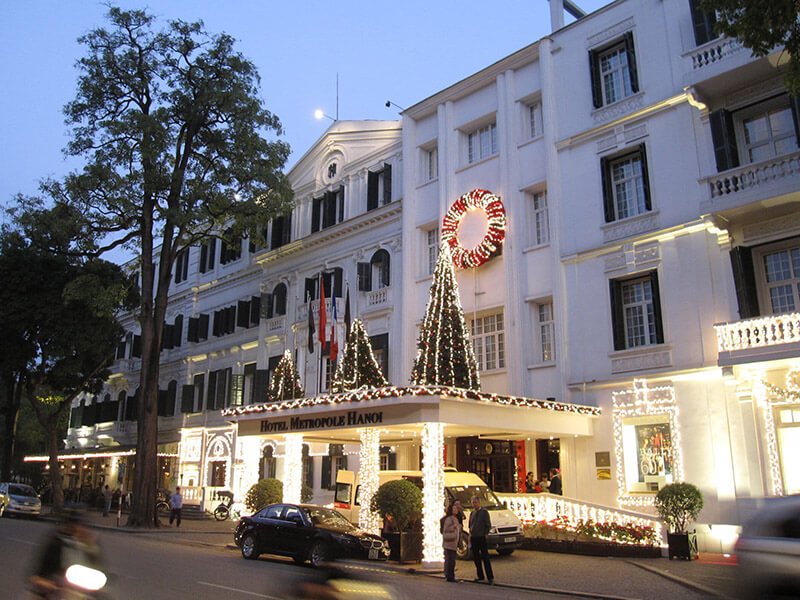 The front main entrance of the Sofitel Legend Metropole Hanoi

Here at the Sofitel Legend Metropole Hanoi, you have the options of three different culinary-themed restaurants. Choose from the fine French dining of Le Beaulieu, the Vietnamese cuisine of Spices Garden, or the styled bar atmosphere of Angelina. 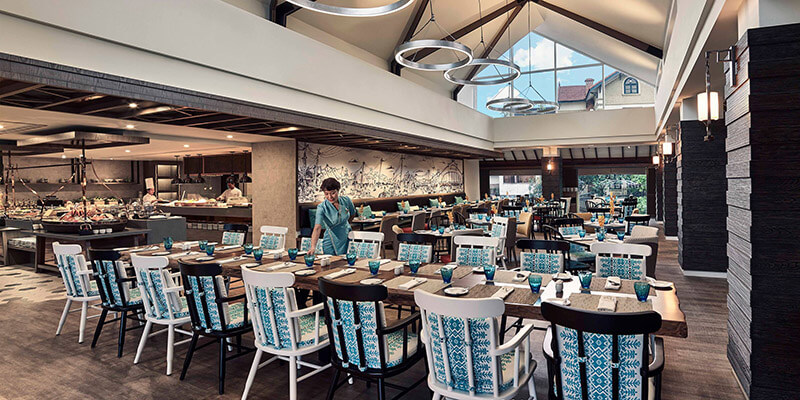 The Pacifica restaurant inside of the Pan Pacific Hanoi

The Pan Pacific Hanoi Hotel has many restaurants, bars, and stores that make for an interesting visit during your holiday season. The Pacifica restaurant here offers an extensive buffet selection suiting all taste preferences. The Song Hong Bar here also makes for a great place to enjoy a cocktail during the Christmas holiday. 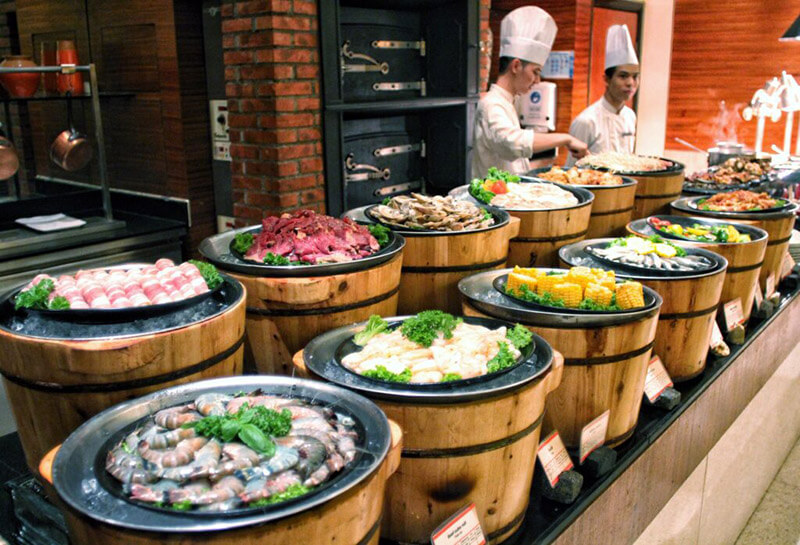 Located within the expat district of Hanoi, the atmosphere here is relaxed and friendly. The Cafe Du Lac here is similar to a French brasserie and has open service counters, serving an international menu as well as including a buffet with a wide range of food from all over the world.

Check reviews and prices of hotels in Hanoi below:

When it comes to New Year’s Eve parties in Hanoi, you can easily find a location celebrating the event. Just about every nightlife establishment in Hanoi will be celebrating the New Year with their own events. Bars and pubs in Hanoi featuring a music venue or an open rooftop section are trendy places to welcome in the new year.

Hanoi Rock City is an exceptional place to celebrate New Year’s Eve if you are looking to party and welcoming the new year to live music. Being the host of the Quest Festival, a celebration of music and arts, Hanoi Rock City has guaranteed itself as one of the places to be to have a grand evening during New Year’s Eve.

Where to Spend Christmas and New Year’s Eve in Hanoi: New Year Countdown

Celebrating Christmas and New Year’s Eve in Vietnam is a beautiful experience, especially in Hanoi's capital city. Make a special holiday plan in Hanoi during the festive season and get involved in the holiday spirit!

Check out our blog on Christmas and New Year’s Eve in Ho Chi Minh City.

© Written by Long Tran for itourvn.com | itourvn.com is a participant in the Amazon Services LLC Associates Program, an affiliate advertising program designed to provide a means for sites to earn advertising fees by advertising and linking to Amazon.com