What You Should Know Before Getting Tattoos in Vietnam Tattoos have been a stigma, a taboo in many cultures, especially in Asian countries where they would often be associated with mafias and bad people. However, the world has changed, and so has Vietnam. These days, along with the booming popularity of tattooing internationally, tattooing in Vietnam is flourishing as well.
Now, the obvious choices in Vietnam are good foods, breathtaking scenery, and rich history…How about tattooing?

Tattoos in the Vietnamese Culture

In contrary to the negative viewpoints towards tattoos that many Vietnamese still hold, tattooing is, in fact, one of Vietnam’s most ancient customs, along with the black teeth trend. Born 2000 – 3000 years ago, and lasted until late XIII century – early XIV century, tattoos were believed to protect humans from the deadly attacks of sea monsters, demons and accidents… On top of that, tattoos were such an integrated part of the Vietnamese lifestyle that at certain times, they acted as a sign of patriotism. During the Mongol invasions of Vietnam, tattoos were the way soldiers and citizens showed their patriotism and support in the fight against invaders. 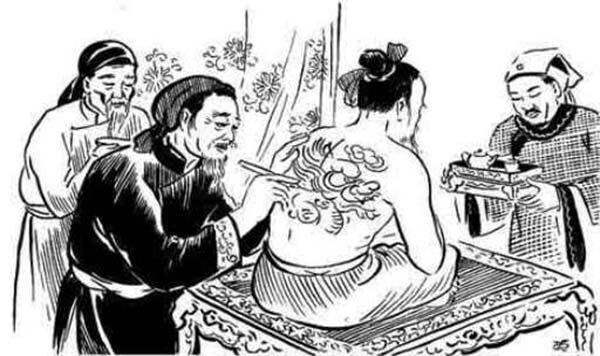 Fast forward a few centuries, tattooing was no longer a popular practice, and, along with cultural influences from Asian giants like China (black societies) and Japan (yakuza), tattooing became what only bad people do. But as the world evolves, and thanks to the exposure to Western cultures, Vietnamese are much more open-minded nowadays. Tattoos can be a long-lasting “fashion” statement, an expression of oneself or a mark of one’s meaningful events... In the city, such as Ho Chi Minh City of Hanoi, the tattooing scene is burgeoning. People in their 20s and 30s, white-collar workers and students are among lovers of this art form, which has contributed significantly to clearing its name. Still, Vietnamese aren’t completely free of prejudices for people who get tattoos, so expect some looks when you’re in a community or trying to land a job, typically in the rural areas of Vietnam.

3 Reasons for Getting Tattoos in Vietnam

Besides commemorating your far East adventure, what other reasons should you consider getting tattoos in Vietnam?

Vietnam can be considered a hidden tattooing gem for the price you pay and the quality that you receive. Partly owing to the difference in Vietnamese currency value and others, the price for getting inked here is quite low if you compare it to prices in other countries such as America, Australia, England… and even Eastern ones like China and Japan. For example, while a full sleeve will probably cost you US$ 500 – US$ 3000+ in other countries, in Vietnam, you only have to pay half the price. But don’t let the numbers fool you, Vietnamese artists are just as skilled. Whether old-school, blackwork, Japanese or cute illustrative style… artists here cater to a wide range of tastes. So get going and the results might wow you more than you expect!

Instead of going with some common designs which you can get inked anywhere else, how about a symbol/mark that represents Vietnam for your trip? Surely you can get a conical hat tattoo in LA too, but it would certainly carry more weight if it has been done in Vietnam right? Besides, artists here would have a better understanding of national symbols like ao dai, lotus or Dong Son drum…They can also provide helpful advice on how to select ones that will not appear offensive should you opt for symbols of different ethnic groups and religions. 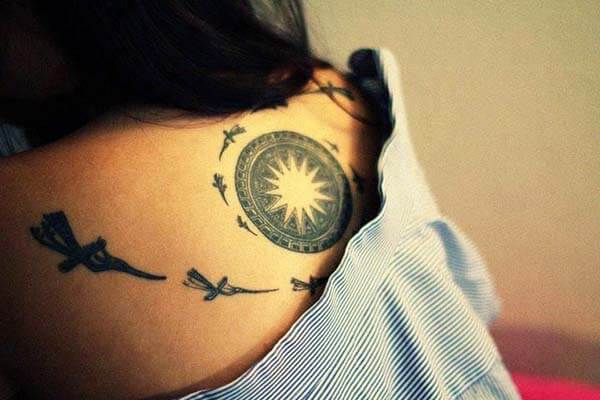 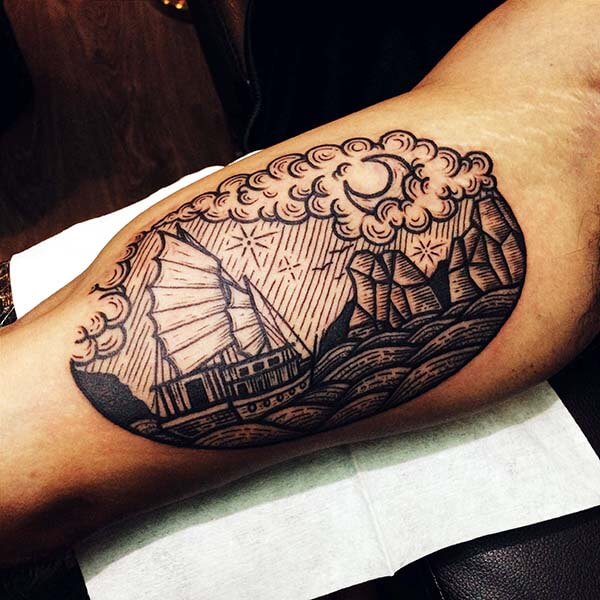 Nowadays, tattooing isn’t that much of a taboo in Vietnam anymore

Getting tattoos in Vietnam can be an outlet for presenting one’s statement and emotional support. What better ways to forever remember your loved ones, a momentous day, or your life motto than to have it on your body? Vietnamese are now more accepting of tattoos, mostly small ones, which are perfect if you want a tattoo of personal meanings.

Before You Ink - Tattoos Safety

Getting tattoos is fairly dangerous as you may be infected by contaminated inking tools, inking process, and the ink itself. You will need to take cautious steps before getting a tattoo.

Additional reading material: All you need to know about Tattoo cover-up

Now that you’ve gotten a tattoo, what’s next is aftercare – a crucial, if not more important than getting inked, part of your tattooing journey. It is certainly hard to take care of your tattoo while you’re on holiday, because it needs to heal, and well, traveling isn’t the most convenient time for hygiene. So remember these if you want no regrets: 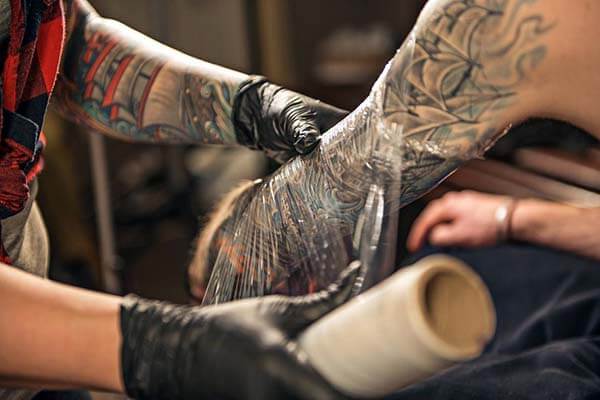 Your new tattoo is basically an open wound, so treat it with utmost care

Get the world-leading travel insurance upon your trip in Vietnam:

Where to Get Tattoos in Vietnam

In big cities like Hanoi and Ho Chi Minh City, there are several tattoo shops for you to choose from. Just a few streets in the center of District 1 such as Pham Ngu Lao, Nguyen Cu Trinh, and Cong Quynh, create an area called “town of tattooing” with a dozen of famous art tattoo studios in Ho Chi Minh City. They are friendly with excellent artistry and also speak English fluently.

Founded in 2009 by Bo Toee, the one and only member of Cheyenne Tattoo in Vietnam, Saigon Tattoo Club has earned a considerable amount of attention among the tattoo art lovers. They are a team of 8 tattoo artists and the only studio in Vietnam being sponsored by Cheyenne Tattoo Machine Manufacturer and Radiant Colors Company.

It is one of the best-known tattoo studios in Ho Chi Minh City. The founder, Danis Nguyen, has won many prizes from competitions and conventions nationally and internationally also. Saigon Ink owns a team of 9 talented artists with their own specialization.

Using the knowledge and technique from Japan, Mr. Trung Tadashi returned to Vietnam and opened Tadashi Tattoo in 2007. Besides the founder Trung, who is skilled to change your idea into ink on your body perfectly no matter what personality you have, there are 5 other artists with high professional skills for you to choose. 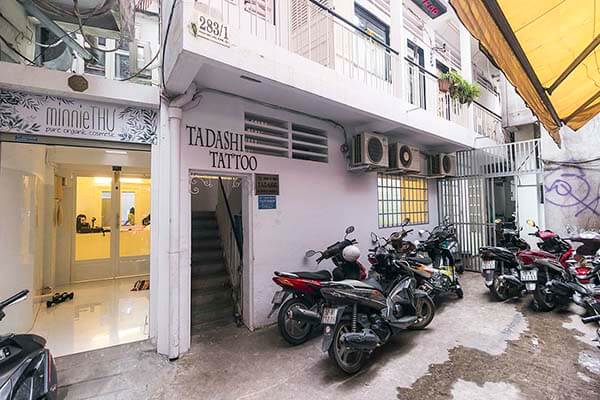 Another Tattoo (when in Hanoi, check out these guys)

Another Tattoo takes walk-ins on a first-come-first-served basis. They accept cash & credit cards. 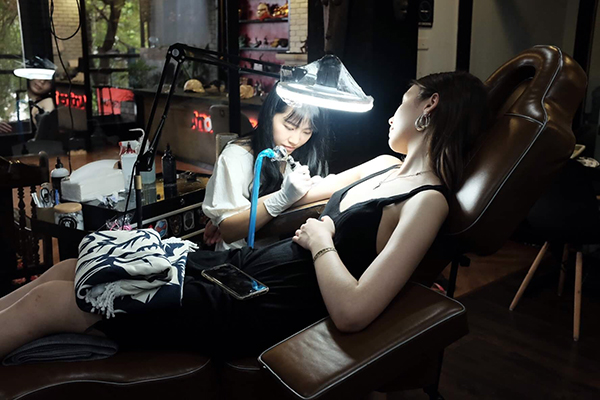 Conclusions on What You Should Know Before Getting Tattoos in Vietnam

Getting tattoos in Vietnam can both be a fun souvenir to your adventure in Ho Chi Minh City / Hanoi, and an art form you can keep to yourself evermore. Besides low prices and good quality, it can also be a unique way to get to know Saigon’s other side – where people are more accepting of unconventional ideas. Just remember to get inked with care and consideration.

© Written by Ngan Mai and Minh Anh for itourvn.com

Great blog on tattoos! Can you guys recommend a place to get a belly piercing in Hanoi?

0 Cancel Reply
Great blog on tattoos! Can you guys recommend a place to get a belly piercing in Hanoi?
Cancel Update Comment

Here are some of our recommended places to get piercings: https://www.itourvn.com/blog/all-you-need-to-know-about-getting-a-piercing-in-vietnam

0 Cancel Reply
Here are some of our recommended places to get piercings: https://www.itourvn.com/blog/all-you-need-to-know-about-getting-a-piercing-in-vietnam
Cancel Update Comment

0 Cancel Reply
I just came across your site and wanted to let you know that I love your content about Vietnam :D:):)
Cancel Update Comment

Another tattoo is great!

Pretty nice post. I just stumbled upon your Website and wished to say that I have really enjoyed surfing around your Website posts.
After all, I’ll be subscribing to your feed and I hope you write
again very soon!

0 Cancel Reply
Pretty nice post. I just stumbled upon your Website and wished to say that I have really enjoyed surfing around your Website posts. After all, I’ll be subscribing to your feed and I hope you write again very soon!
Cancel Update Comment

I will be visiting Vietnam next month, and I always get 1 tattoo in each country I visit. I'm thinking the Vietnamese hat or the lotus

0 Cancel Reply
I will be visiting Vietnam next month, and I always get 1 tattoo in each country I visit. I'm thinking the Vietnamese hat or the lotus :D
Cancel Update Comment

very nice blog. thanks for sharing

I have a question. It is customary to tip for tattoos in Vietnam? Thanks!

0 Cancel Reply
I have a question. It is customary to tip for tattoos in Vietnam? Thanks!
Cancel Update Comment

Hi Vi,
You can tip the tattoo artists if you're pleased with the finished work. However, you can ask first to make sure if they accept tips.

0 Cancel Reply
Hi Vi, You can tip the tattoo artists if you're pleased with the finished work. However, you can ask first to make sure if they accept tips.
Cancel Update Comment