What to Know about the Royal Tombs of Hue Hue has long been known as one of Vietnam’s most ancient cities, the house of many olden yet impressive monuments like the Imperial City. Among all, some that stir up the most awe and curiosity from visitors are the royal tombs of Hue. Let’s read on to see what these interesting structures have in store!

What Are the Royal Tombs of Hue?

You’re probably wondering: what’s so great with visiting some strangers’ tombs? But let us tell you, there’s a reason that this is one of the 8 best things to do in Hue.

These tombs aren’t ordinary. They’re the final resting places of the Nguyen Emperors - Vietnam’s last royal family. Therefore, all the tombs were built with great effort to make them as impressive and majestic as possible. They also hold some valuable artifacts that’ll teach you a lot about Vietnamese history. For all these reasons, the royal tombs of Hue are now parts of UNESCO World Heritages in Vietnam. 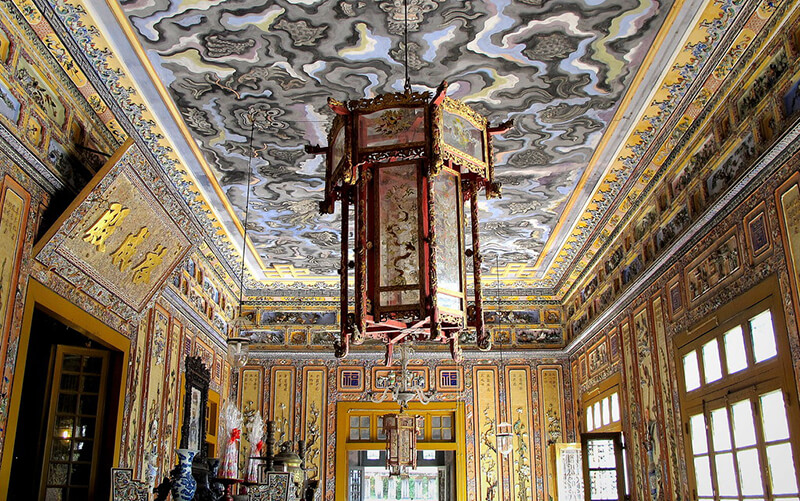 General Information of the Royal Tombs of Hue

Tickets can be bought at the booth in front of the Imperial City.

Tips on Visiting the Royal Tombs of Hue 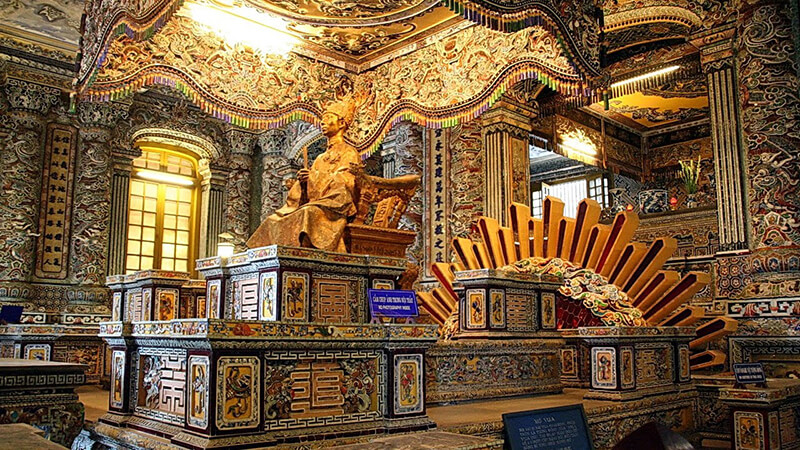 (Khai Dinh Tomb) Taking pictures inside this room is forbidden

An Overview on the Royal Tombs of Hue 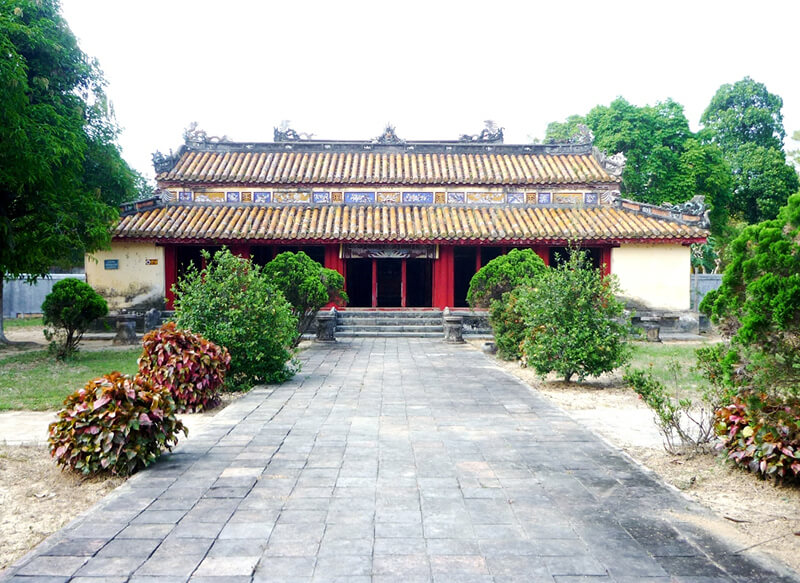 Gia Long Tomb acted as a template for all other tombs

Gia Long Tomb lies beside the Perfume River, between the lush pine forest on Dai Thien Tho Mountain. This location is ideal for viewing the sunset in silence but also makes the tomb somewhat inaccessible. Because of this, despite being the final resting place of the Nguyen dynasty’s first emperor, Gia Long Tomb suffered the most damage of time and isn’t visited much. 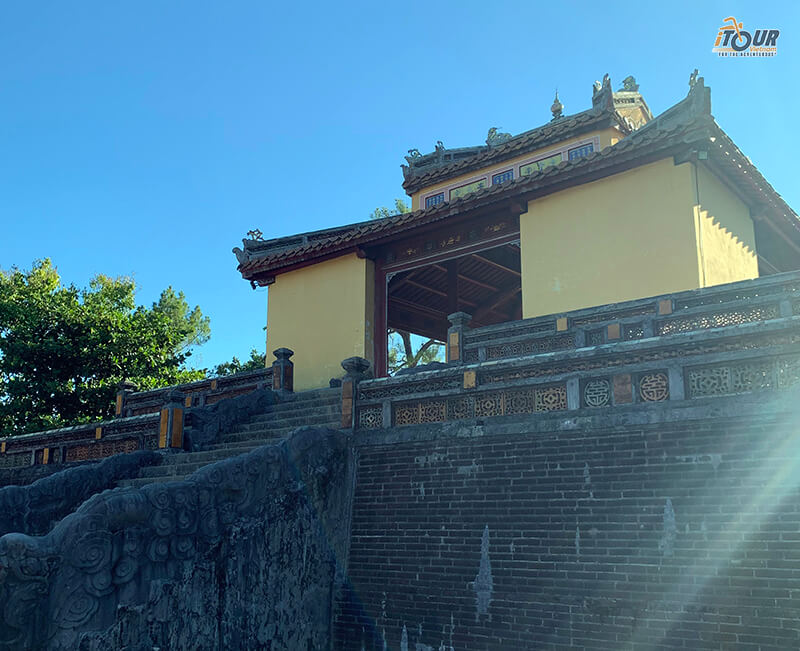 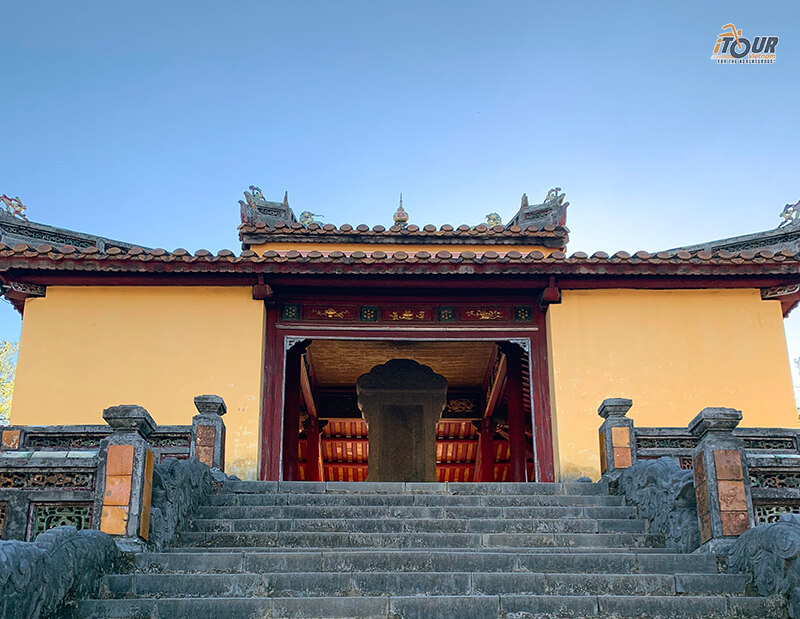 Minh Mang Tomb shows the emperor’s love for traditionalism through its classic Chinese-influenced design. The tomb has a balanced architectural layout, with all structures being symmetrical, and one central path (called the “God Path”) connecting all important monuments: the main gate, the courtyard, the stele pavilion… and the emperor’s tomb. Surrounding the buildings are endless rows of pine trees and a lotus pond. Though quite far from the city center (12 kilometers), Minh Mang Tomb is often admired by visitors for its expansive ground and representative design. 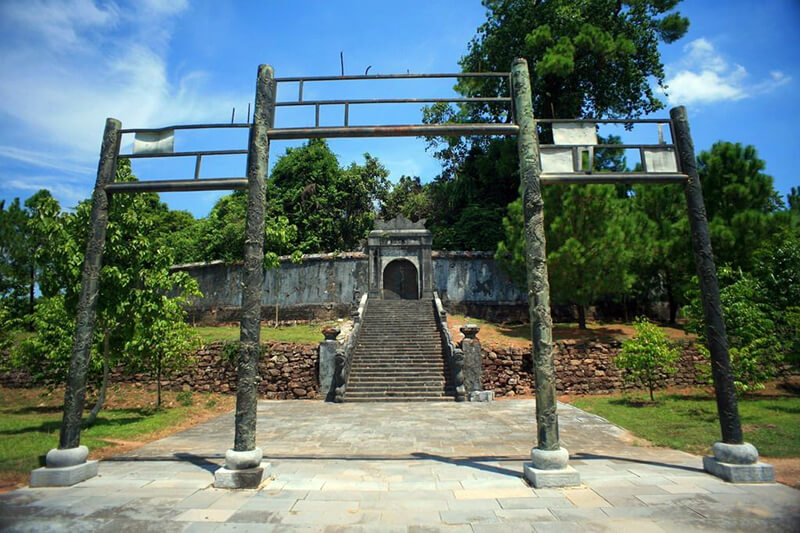 Encapsulating all captivating features from both Gia Long and Minh Mang Tombs, yet Thieu Tri Tomb has a humble appearance. The tomb lays peacefully between fruit gardens and paddy fields, without any walls, so visitors will feel like they’ve traveled back to rural Vietnam. 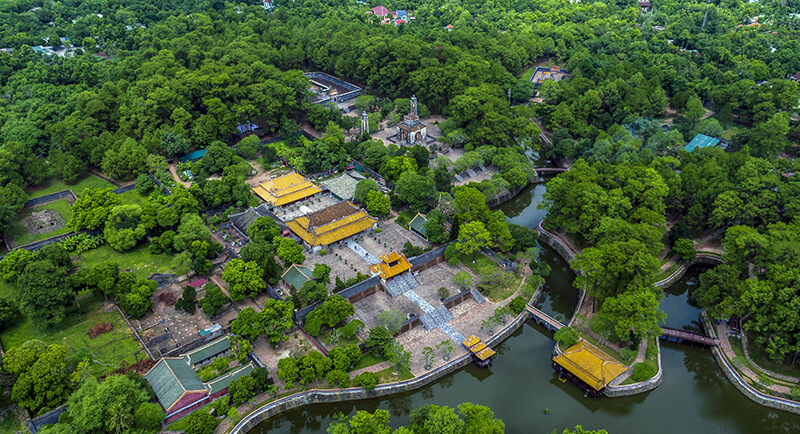 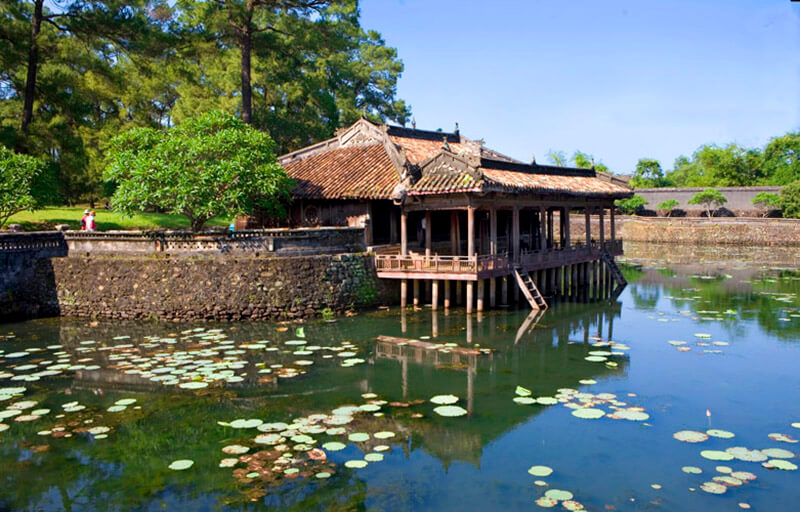 Tu Duc Tomb can be crowned as the most beautiful of all royal tombs in Hue thanks to the harmony of its fine structure and the surrounding nature. Greeneries can be found everywhere and there’s even a big pond to give the place a serene atmosphere. Maybe because Emperor Tu Duc was a ruler with an artist’s soul, the layout of the tomb’s ground is so romantic.

Interestingly, Tu Duc was childless so he had to write his stele. He even built the tomb into a mini Forbidden City to live, work, and relax. Nowadays, you can find Minh Khiem Theatre - one of Vietnam’s oldest theatres that are still standing - there. 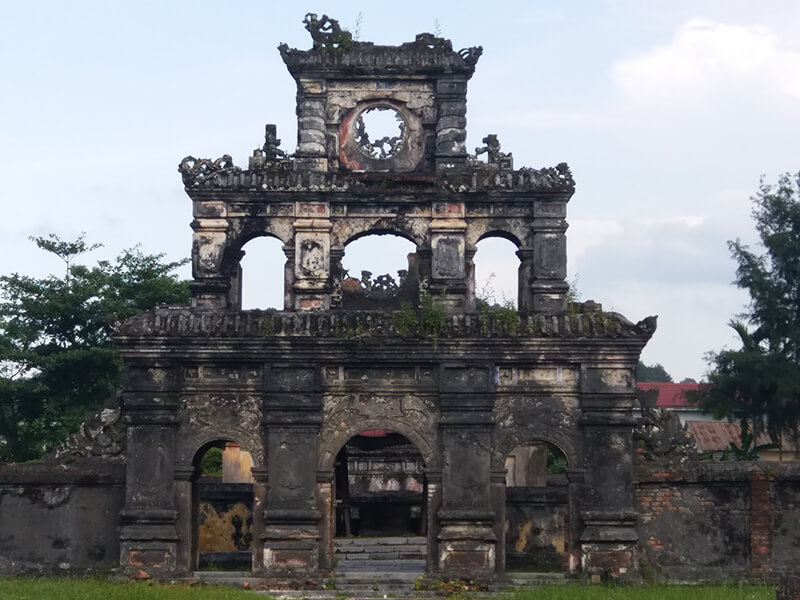 Because of various political situations, this one became the simplest in all royal tombs of Hue

Originally, this was Emperor Duc Duc’s Tomb. He had only been reigning for 3 days when he was dethroned and passed away. Emperor Thanh Thai built this tomb for his father when he came into power. However, both Thanh Thai and his son - Duy Tan, had fallen under the French colonial authorities and were exiled. Later on, they were buried in Long An Temple on Duc Duc Tomb’s ground. You can see three altars for the three emperors inside the temple. 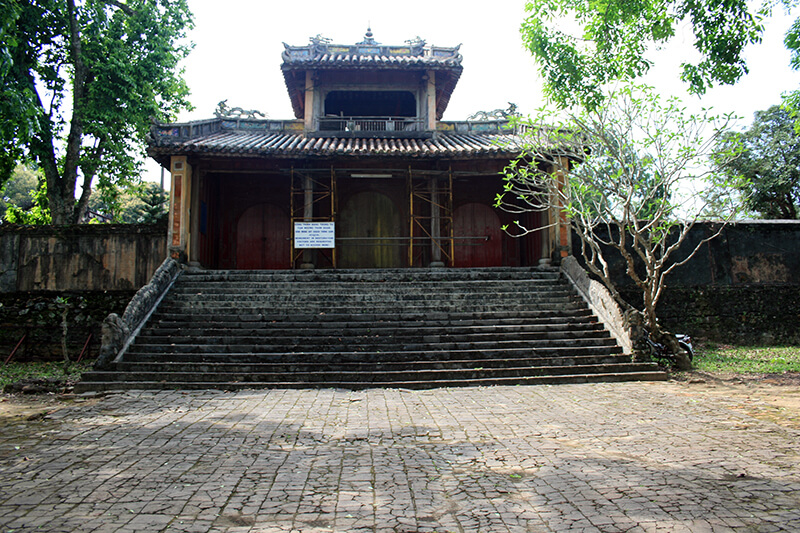 Of all royal tombs of Hue, Dong Khanh Tomb is the smallest

Dong Khanh first built this as a temple for his father. However, when he suddenly passed away, his successor Thanh Thai, due to economical reasons, couldn’t build a proper royal tomb for him. Instead, Thanh Thai repurposed the temple into Dong Khanh Tomb. The tomb was a mix of Western and Eastern designs. The overall layout was based on traditional oriental ideals, yet you can still find stained glass windows decorating the place. 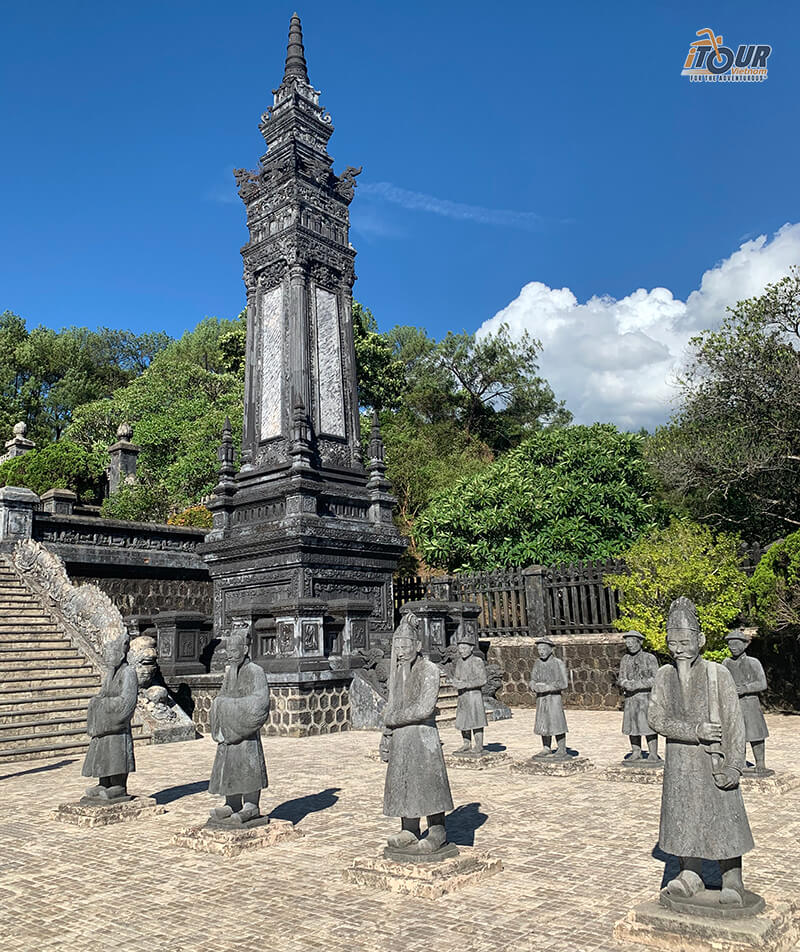 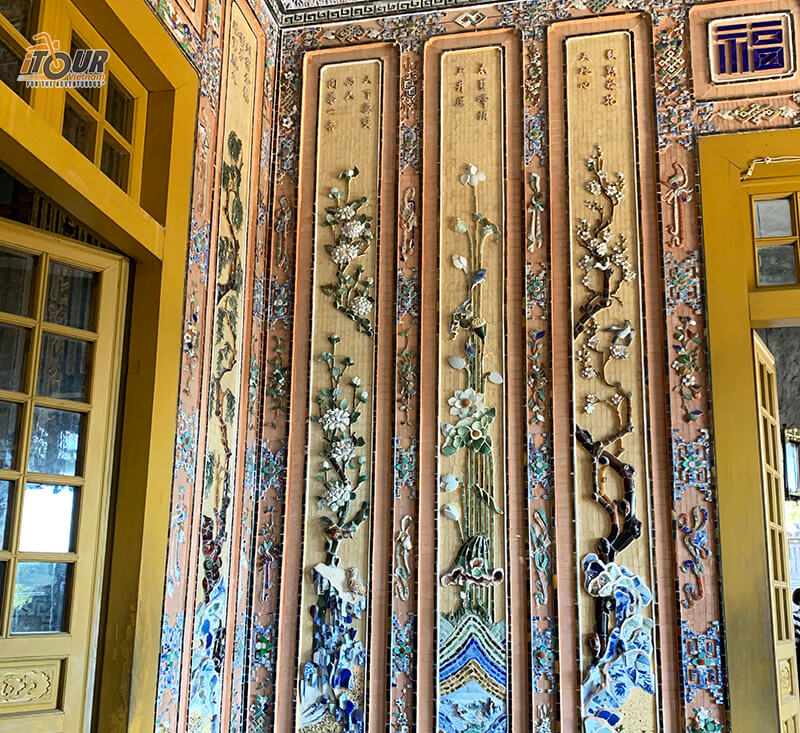 Khai Dinh Tomb has a clear French influence on its design. To complete this 10-year masterpiece, various materials had to be delivered from overseas: iron, concrete, Ardoise tiles from France, porcelains and stained glasses from China and Japan…

There are three main parts inside the tomb: an exhibition room for displaying gifts (now they’re valuable artifacts) to Emperor Khai Dinh, a room for the altar, and a room for the coffin. Walking through these rooms, you’ll understand why even though Khai Dinh Tomb is smaller in size, it constantly tops lists of must-visit royal tombs of Hue.

Final Thoughts on the Royal Tombs of Hue

The seven royal tombs of Hue are timeless monuments that are not only picturesque but also utterly significant to remind posterity of Vietnam’s past, specifically the Nguyen dynasty. If you have time on hand, be sure to check them out!

Have you visited the royal tombs of Hue before? Share with our readers your experience on these unique structures!

Ultimate Guide to the Hue Festival

Get your travel insurance to visit Hue: