If you come across a question about what a must-watch show in Vietnam, the answer might always be water puppet show. While puppet dancing is popular all over the world, water puppet only exists in Vietnam. Thus, there is no reason to drop by water puppet theatres in Vietnam if you have a chance to visit our country.

Some Water Puppet Theatres in Vietnam

There are a lot of places providing water puppet shows in Vietnam. You can check out the list below for more information:

Check price and reviews of famous hotels in Vietnam below:

Water puppet is a traditional folk art form of Vietnam, originated from the ancient rice civilization. It was invented about 10 centuries ago in the Red River Delta and is now considered as an intangible cultural heritage of Vietnam. This kind of art is the unique creation of Red River Delta residents. It was first created while the residents here were trying to figure out a way to control water for agricultural activities. Since then, water puppets had been often performed in festivals, Tet holiday, or special days of the village.

The creation and the intelligence of Vietnamese people are clearly shown through water puppetry. Vietnamese water puppetry was formed based on the thoughts and feelings of the farmers. They depicted their daily lives and wishes through the stories told by puppets. Water puppetry also includes music and poems as a special style of narration of this masterpiece.

Back then, artisans who devoted their time to water puppetry were grouped together. A group consisted of 70 to 80 artisans and was led by a leader. In one group, there were only about 20 artisans who mainly focused on puppets, the others were in charge of other business such as logistics and setting up the stage. The group of water puppet artisans would organize a ceremony to show their gratitude to the god of this art once a year. In the ceremony, they adopted new members. There was one rule that woman was not eligible since water puppet artisans were afraid that women would reveal the secret of water puppet of the group when she got married to people who were not in the group. 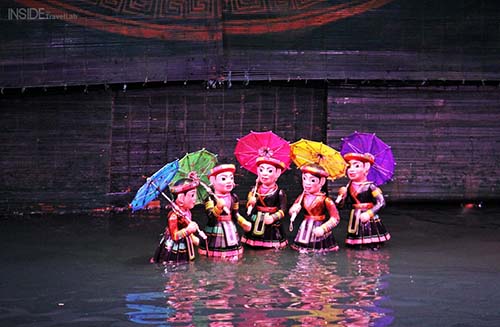 Before, the water puppet was only performed outdoor, where the audiences could not only enjoy the show but also nature with trees, open sky, and pleasant breezes. The Northern Delta with lots of ponds and lakes had become ideal places for performing water puppets. Nowadays, although water puppet is performed in theater, artisans always try to bring the most nature-friendly atmosphere in the show. Since water puppet bears high cultural values, it has developed from a folk art form to a stage art form and is now performed widely all over Vietnam for locals as well as foreigners to watch and enjoy.

Vietnamese water puppetry bears unique distinction compared to normal puppet dance: it is performed on the water surface. The stage is set up in the middle of a pond or a lake. It is often designed as a village pavilion ("Đình") in a symmetrical style. It is also decorated with props which are the same as real pavilions such as flags, fan, and parasol. There will be a bamboo blind. The artisans stand behind the blinds to control the puppet while the area of the performance is in front of the blinds. The artisans have to stand in the water to perform. Therefore, the artisans need to be in good health condition. Besides, they have their own special ways to keep their bodies warm, avoid catching a cold like wearing rubber protection clothes when getting underwater. 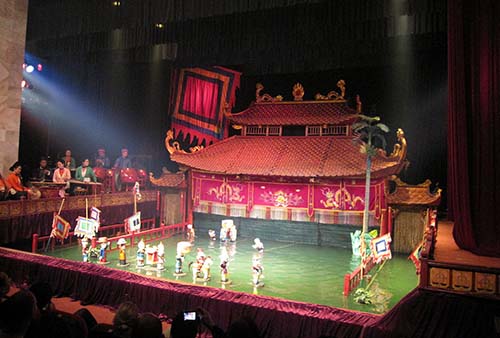 The stage in water puppet theatres in Vietnam

The puppets are the products of wood carving art. Each puppet has its own shape and expression, depicting different characteristics. Generally, puppets often have a smiley, optimistic face which makes the audiences feel relaxing looking at them. The most significant puppet is Teu. He is often the one who introduces the show at the beginning. He always has a joyful smile on his face.

To have a beautiful puppet, there are many steps have to be done from carving to painting. The popular wood that is used to make puppets is fig wood. The artisans will carve the wood into the desired shapes. Despite the fact that the puppet is a one-piece puppet or assembled, the body and the base always stick together. A complete puppet will be painted with waterproof paint. A perfect puppet is one that is easy to control and can be used in many performing effects.

Controlling techniques are the spirit of Vietnamese water puppetry. A beautiful puppet is just a success in terms of carving; the success of a water puppet show is mainly attributed to the smooth movements of the puppets.

The artisans, based on their experience and creation, has invented a variety of controlling techniques, giving the puppets various movements. The controlling part is hidden in the water. It is made up of a system of wires and rods. The artisans make use of the water power to push and pull the pole in coordination with the strings to control the puppet remotely, bringing wonderful surprises to the audiences. 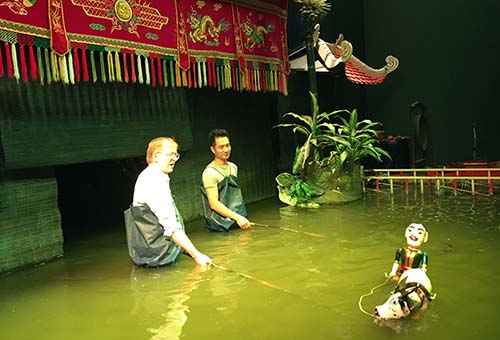 Originally, a water puppet show was performed outdoor as mentioned. Therefore, water puppetry needs loud, strong, and fast music type to keep pace and to boost the atmosphere of the show, creating a dynamic, exciting atmosphere for the show, and keep the engagements of both performers and audiences. Some musical instruments used in water puppetry are wooden bell, drum, horn, and seashells.

Vietnamese water puppetry is a form of art that takes movements as a means of expressing feelings instead of words, and thus music is an indispensable part of this masterpiece. The performers will control the puppets’ movements based on the pace of the music, sometimes fast, sometimes slowly. 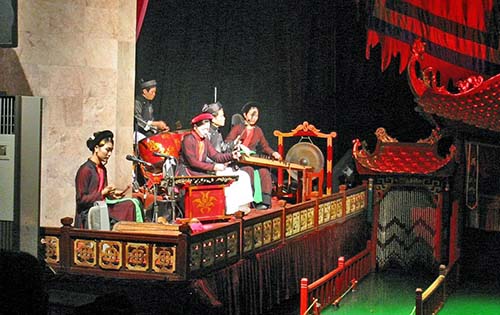 Some Typical Pieces of Water Puppet Shows in Vietnam

With Teu, the artisans want to portray a good and nice farmer who plays a role as a narrator in the show. He is in charge of the introduction part of the show and informing the events that are going to take place in the village which is the agenda of the show. He can freely show his opinions about any issues happened, often sarcastic ones. Teu is the connector between the other puppet characters and the audiences throughout the show. 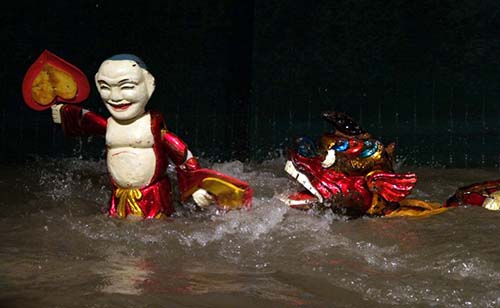 Chu Teu, the host of water puppet shows in Vietnam

This part depicts the daily farming activities of farmers such as plowing, herding, watering, cultivating, harvesting, etc. Watching this part, we can feel a peaceful atmosphere of country life. Although the farmers have to work very hard, they are still very optimistic about life and always hold a strong belief in a bright future. 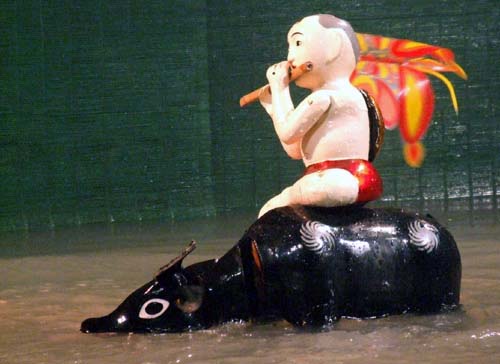 A kid is taking the buffalo to the grass field

This part is related to an old story called The legend of the Sword Lake (Hanoi). The story is about Golden Turtle lending national hero Le Loi a sword, helping him successfully led an insurrection in 10 years (1418 - 1427). Le Loi finally became the King in 1428, named Le Thai To. One day, when King Le Thai To was on a boat paddling around for sightseeing, Golden Turtle appeared and asked him to return the sword. Since then, the lake was named Sword Lake. 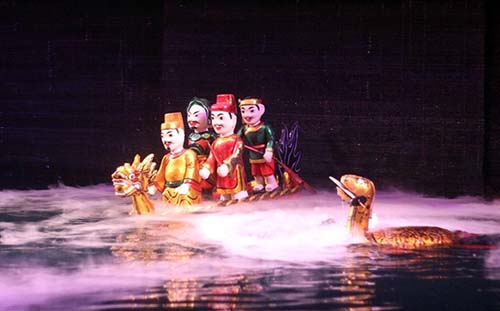 Legend of the Sword Lake

This part is related to the origin of the Vietnamese. Vietnamese have always considered Dragon and Fairy our ancestors. Around 2800 B.C., Lac Long Quan (Dragon) married Au Co (Fairy). Au Co gave birth to a hundred eggs, later became a hundred children. After that, fifty of them followed Father Lac Long Quan to the forest, fifty of them followed Mother Au Co to the sea. One of the children following Lac Long Quan later became the first king of Vietnam. He called himself Hung King. 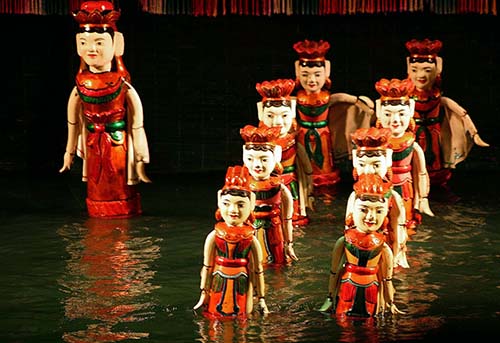 Get a quote for Vietnam Travel Insurance: