Wat Chantaransay Khmer Pagoda in District 3 (or the Moonlight Pagoda - Wat means pagoda, Chantaransay means moonlight) is the first of its kind in Ho Chi Minh City. The pagoda was built in 1946, and up until now, has been a significant keepsake of Khmer Krom’s culture and religious activities.

Khmer People In Vietnam And In Ho Chi Minh City

There are around 1.3 million Khmer people in Vietnam who mostly reside in the Mekong Delta region (otherwise called Khmer Krom). Even though they settle in their own villages, Khmer people live harmoniously with other ethnic groups, while maintaining their culture through traditions like Ngo boat race on the Ok-ang Bok (worship of the moon) festival or Chol Chnam Thmay (New Year festival). They mainly live as fishermen and pottery artisans. The Khmer language can be spoken by the majority of residents here. 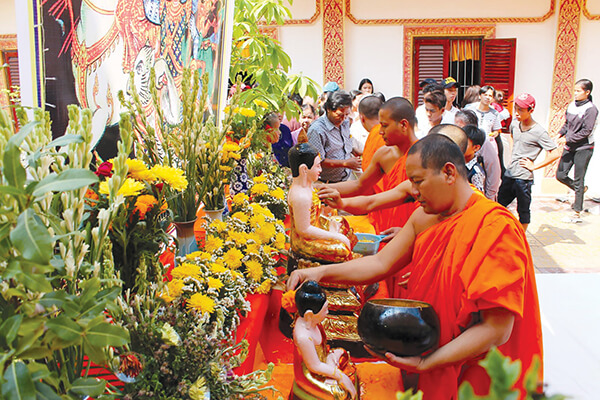 The ritual of bathing the Buddha on the third day of Chol Chnam Thmay festival.

In Ho Chi Minh City, there are approximately 25.000 Khmer people (2015), and most of them live around the Nhieu Loc and Thi Nghe canals, Wat Chantaransay Khmer Pagoda and Wat Pothiwong Pagoda (Tan Binh District). Due to the scattered population, they don’t have as distinct a culture as Khmer Krom. Few can read and write in the Khmer language, and most cultural activities take place at the above-mentioned pagodas. There’s also a Cambodian market in District 10, and a Khmer language center located at Pho Minh Pagoda in Go Vap District.

Around 84% of Khmer people in Vietnam are followers of Theravada Buddhism. They also seek nirvana by gaining merits from supporting Buddhism and studying in the monastery. Some of the biggest festivals are the Meak Bochea, Visak Bochea, Chol Vossa, Chenh Vossa, and Kathina. Celebrations often include praying and giving food to the monks for good merits.

More on Religions in Vietnam.

Whether you’re backpacking or going on tour around Ho Chi Minh City, Wat Chantaransay Khmer Pagoda is a must in learning about the rich culture of minority ethnic groups in Vietnam.

The pagoda’s ground is 4.500 square meters and has undergone seven restorations. It bears many signature features of a Theravada Buddhism pagoda.

In the middle of the yard, you will immediately spot a small pond, and Buddha stupa in gold - the signature color of Buddhism. The roof of the stupa is decorated with dragon’s tails that symbolize power and eminence. 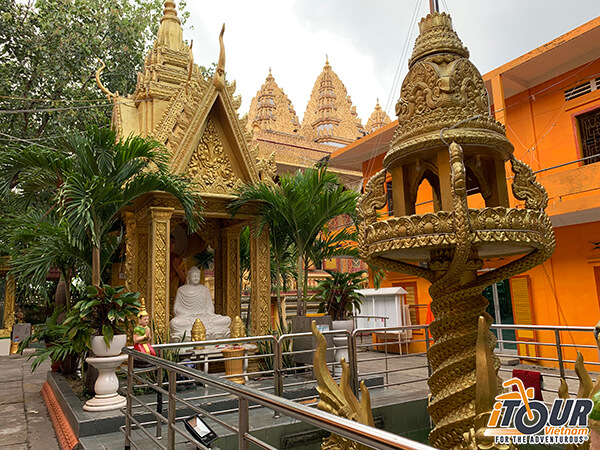 Next to the parking lot is a white, medium-sized Reclining Buddha statue that has a gold Naga (snake) at its feet. Naga symbols can be found everywhere in Wat Chantaransay as they’re often regarded as the protector of the Buddha and the dharma. 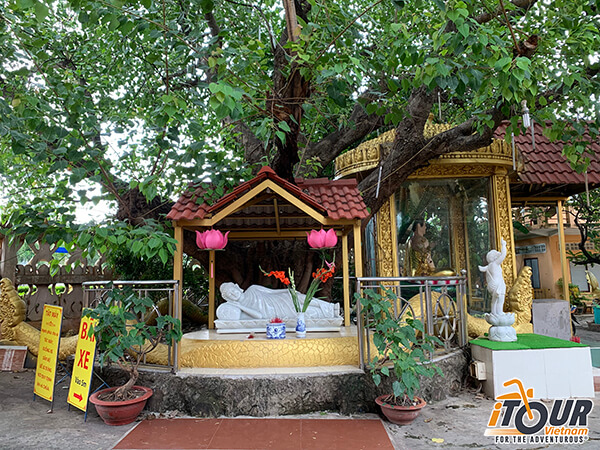 The statue of the Reclining Buddha. 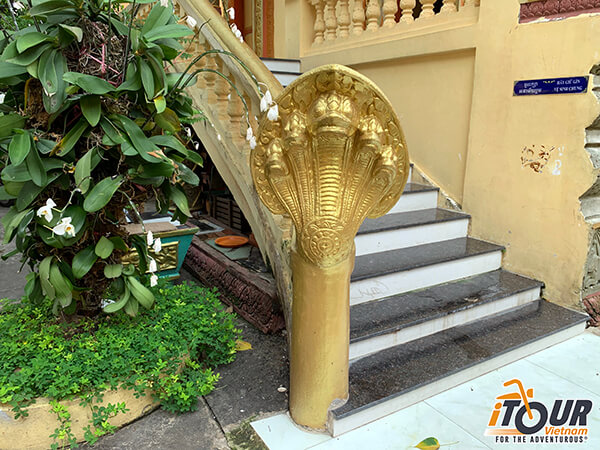 Decors in the form of the naga can be found throughout the pagoda.

Another key element of the pagoda is the sala - accommodation of the monks. There are two buildings used as sala: one on the left and one on the right of the pond. The salas are painted orange and decorated with colorful statues of Gandharva, Garuda, and flowers that give the place a vivid, yet dignified feeling. 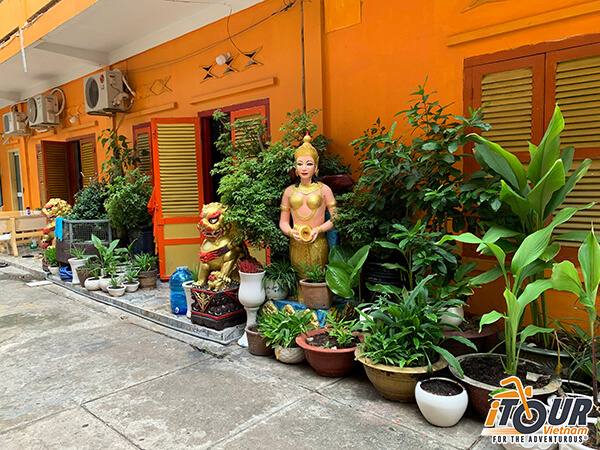 A Gandharva statue at the front of the sala. 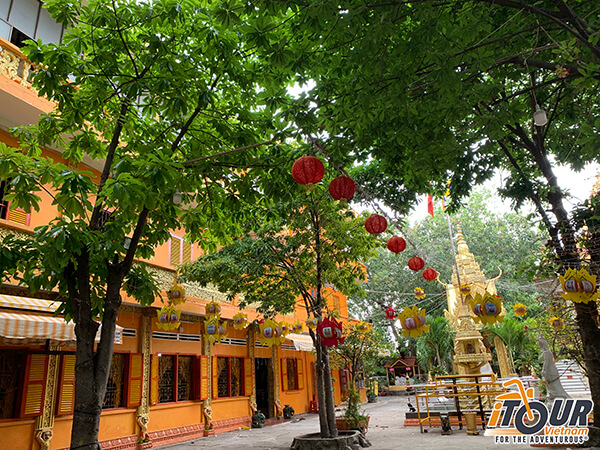 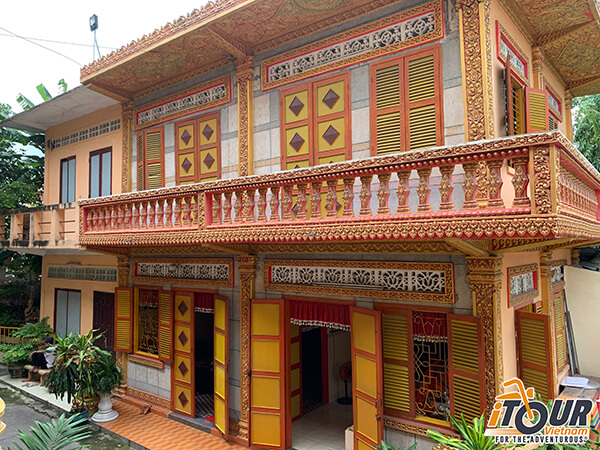 The sala’s hidden on the left of the pagoda.

Last but not least is the most important building in Wat Chantaransay - the sanctuary. The sanctuary faces East. It has two stories, two doors each at the front and the back. Inside the sanctuary is a 5-level altar, arranged from big to small, for Buddha only, since Theravada Buddhism doesn’t worship Bodhisattva and other deities. People come here to pray and give incense, and to look at the beautifully painted walls and ceiling as well. 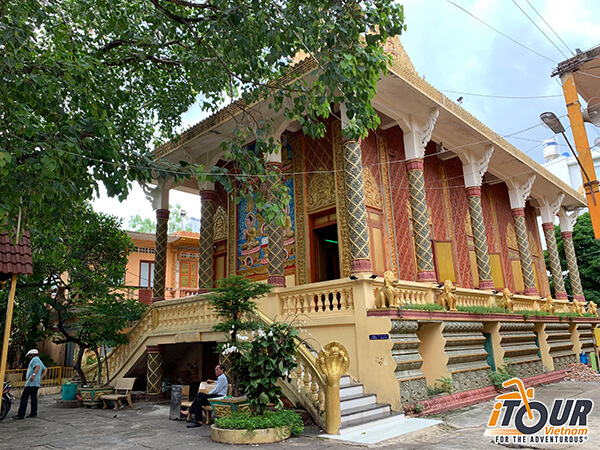 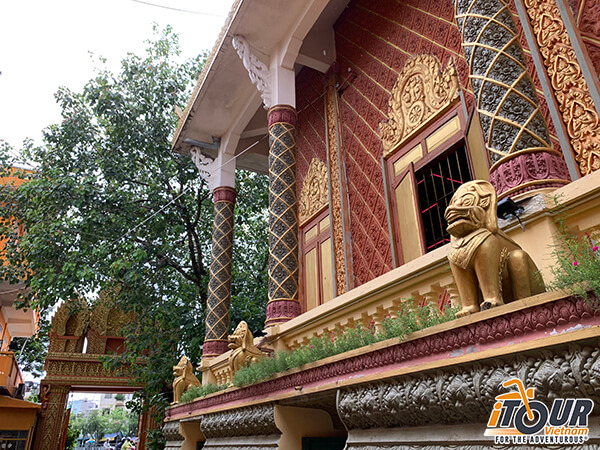 The walls and pillars are intricately engraved with flowers, which creates a soft, royal look. 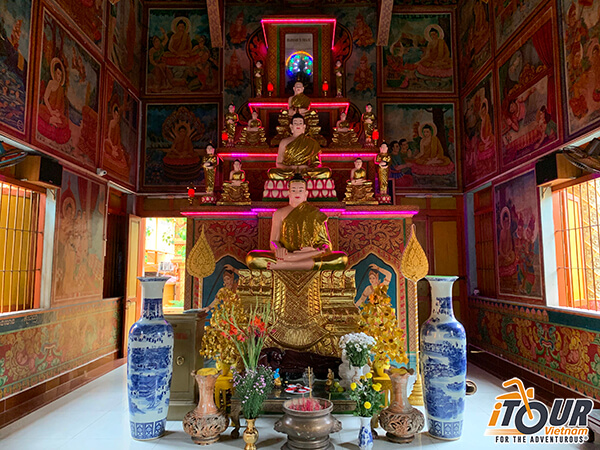 The altar for Buddha in the sanctuary. 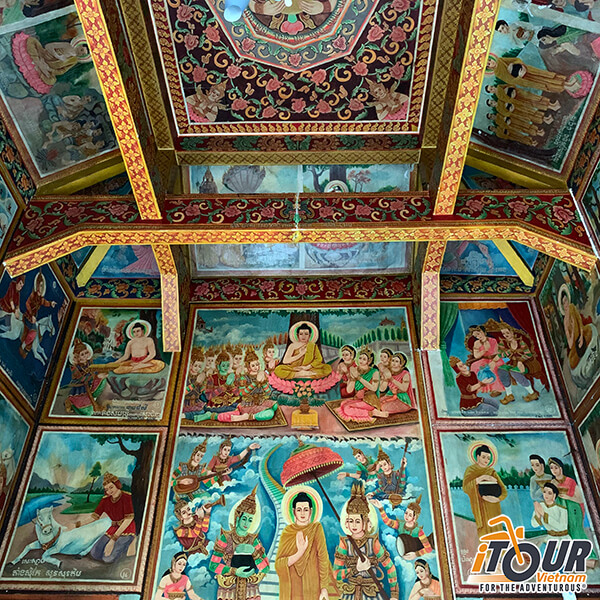 The inner walls and ceiling of the sanctuary that’s painted with stories of Buddha’s path to enlightenment. 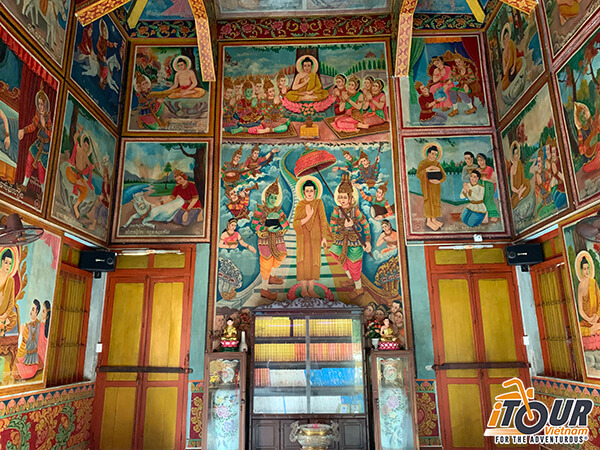 A sutra bookcase at the back of the sanctuary. 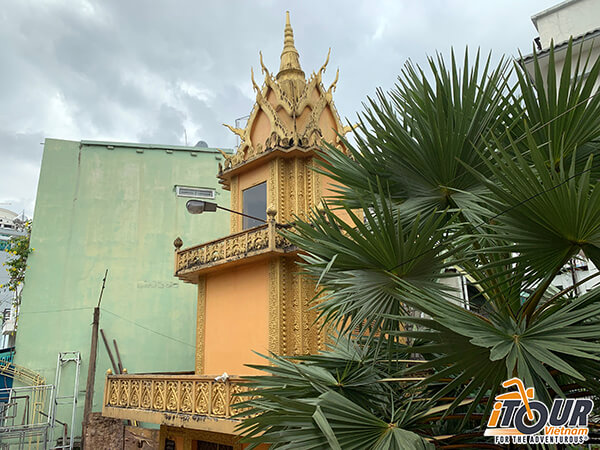 A stupa that’s used to store monks’ remains at the back of the pagoda.

How To Get To Wat Chantaransay Khmer Pagoda?

The pagoda’s opposite Phap Hoa Pagoda in District 3, and it’s about 5 minutes by motorbike from Le Van Sy bridge. 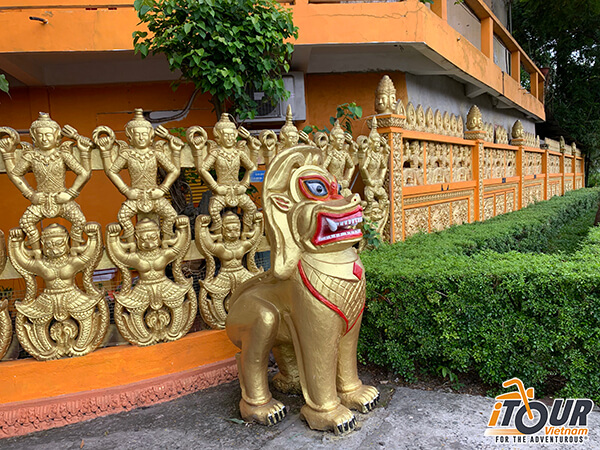 Wat Chantaransay Khmer Pagoda can be easily recognized with its distinctive gate of various religious symbols.

Book a Day Tour in Ho Chi Minh and let the team of local professional guides accompany you on the trip.

Ride-hailing apps: Fare varies among different apps and time.
You can either use Grab or Goviet, but few drivers can speak English so remember to check your 3G/4G plan in Vietnam to check Google Maps.

Taxi’s a great choice for the burning heat of Ho Chi Minh City, but it can be costly and can lead to dangerous taxi scams.

While the Khmer community in Ho Chi Minh City is small, they are accounted for numerous fascinating traditions and are an integral part of Vietnamese history, so visit here for a wholesome experience of the S-shaped land.

Get your travel insurance plan to explore more of Ho Chi Minh City: