Rice is the kind of cereal that is a must-have in every Vietnamese family meals. The Vietnamese rice is quite different from the long grain of Indian rice or the round risotto. And Vietnam is also one of the largest rice exporters with countless paddy fields from north to south of the country. In this article, you will know about Vietnamese rice production and usages.

There are two to four production seasons, and the main ones are winter-spring and summer-autumn. The crops and productivity during these time are the highest. In 2016, the total area for the winter-spring crop was 3 million hectares and 2.8 million hectares for summer-autumn. The total produced in the first crop weighted up to 19 million tons, and 15 million tons in the second crop.

Even though you can find thousands of rice fields across Vietnam, Mekong Delta deserves to be titled the “rice bowl” of the country with 4.3 million hectares producing 24.2 million tons in 2016. The Red River Delta and the Central of Vietnam each had about 1 million hectares for the crop and produced 6.7 million tons of rice.

To produce that amount of crop, a day of the farmer usually starts as early as 5 in the morning. The farmers spend their day working under the scorching sun and the labor work is even more intense where there is little access to technology advancement. All of the production is mostly done manually in those places.

Preparing the fields for Vietnamese rice plantation. To get the field ready for rice planting, the soil has to be plowed to remove weed and remains of the latest crops, harrowed to create a soft surface, flooded, dried, and leveled. These steps in the preparation take months before the field can be used for seeding. Traditionally, the farmers have the buffalos plowing and raking the rice fields instead of using machines. A plow or a rake is tied to a rope settled around the buffalo neck; a farmer follows behind to drive the buffalo direction. A buffalo is an economic option because they can endure the heat well and easy to feed them in a grass field nearby. However, it doesn’t yield much productivity so nowadays machines are more preferred when they are available to the farmers. 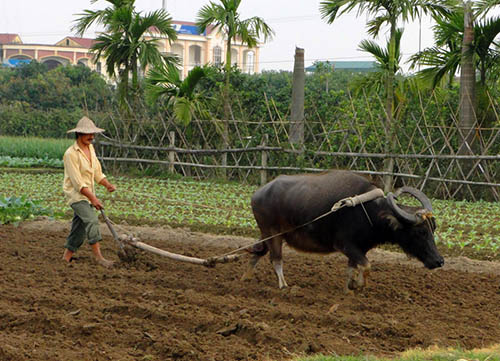 Plowing the field with a buffalo

Growing Vietnamese rice plant. The Vietnamese rice plant can be seeded directly on the fields or germinated in seedbeds before transplanted to the fields. In order to keep the moisture and kill the weed, the fields will be flooded with a certain amount of water. In the past, the water was scooped from the canals dug around the rice crop with buckets tied to bamboo posts with ropes like a swing. However, as technology is more advanced, this labor and time-consuming work can be done by a system of canals and pumpers. 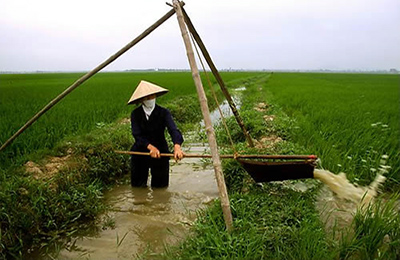 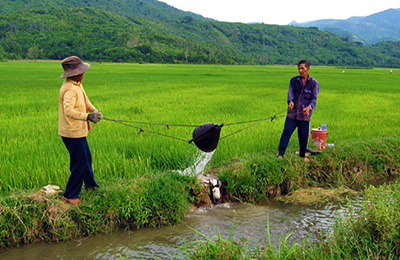 Water the fields the traditional way

Harvesting the rice grain. When the time for harvest comes, it is still imprinted in most people mind the image of farmers working on the fields with the bush hook in their hands to cut the plants, a couple of other farmers beating bushes of the cut crop against wooden boards to separate the grains, some ladies screening to remove the dirt from the grains skillfully with their rice sifter basket. Like other steps in Vietnamese production, the traditional and manual way of doing has been slowly replaced by the machine; only one machine truck driven by one person can finish all of these processes in no time at all. 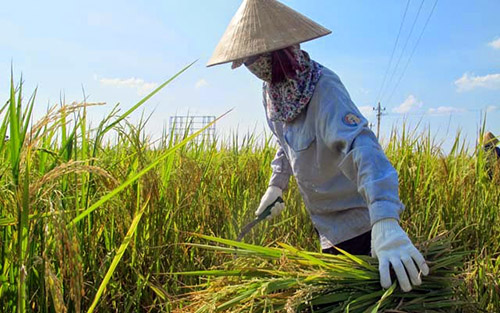 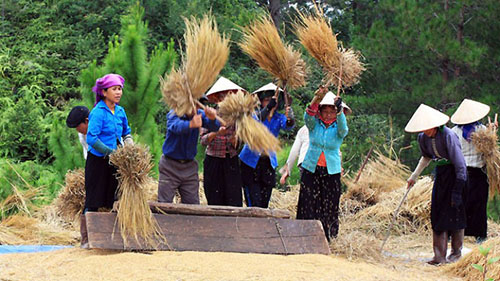 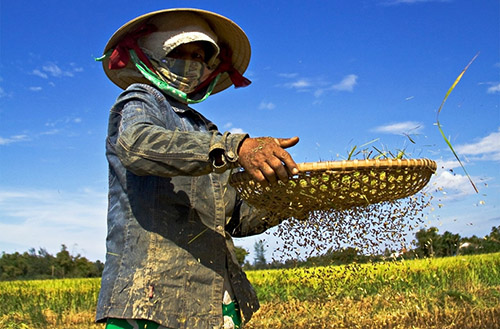 Milling. The grains are then milled to remove the husk, hull, and bran to reveal the beautiful translucent white rice kernel inside. To do this with a manual hulling mill takes a lot of energy, and people have to take turns for this. With the new machine, not only the labor and time are saved but the final products are also more consistent and nicely cleaned. 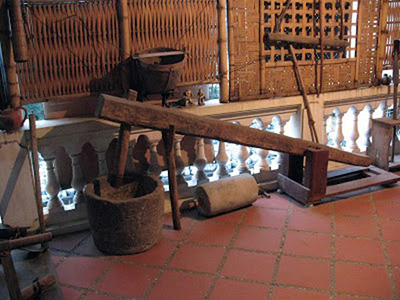 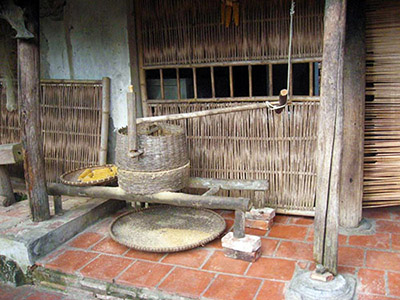 Mill the rice with traditional tools

Despite the hard work, farmers in Vietnam were reported to have received fewer profits from all three crops (about 2-3 times lower) compared to that of other farmers in Southeast Asian countries. Not only that they are individual suppliers among the millions, but most of the products they sell are also raw without enough technology supports and facilities to store, process, or exam the grain, and thus the farmers have to accept the price the traders offered.

Vietnamese rice is exported to over 150 countries across the globe, mainly to China (38%), Philippines (9%), Malaysia (9%), and Ivory Coast (9%). In 2016, Vietnamese rice export revenue of 2016 was US$ 2,159 million for over 4,500 thousand tons exported. In 2017, Vietnam was the third-largest exporter (7 million tons), with Thailand and India topped the chart, even though Vietnamese rice milled production was 42.8 million tons, 1.5 times higher than that produced by Thailand.

The export of Vietnamese rice went even further down the hill when in the first half of 2018, the export price went down to below US$390/tons. Vietnam rice production is high, but the export is low because of the quality and food safety standard.

Vietnamese farmers got used to growing traditional seeds which results in high quantity but low quality. The government are trying to encourage the farmers to grow new kinds of seeds which would be more difficult to grow but result in much better quality, forsake the quantity target (7-8 million tons/year) to set a new target for the quality production (2-3 million tons/year). The rice grains process also needs development since the rice with 15% broken rice amounted to 36% of total production. 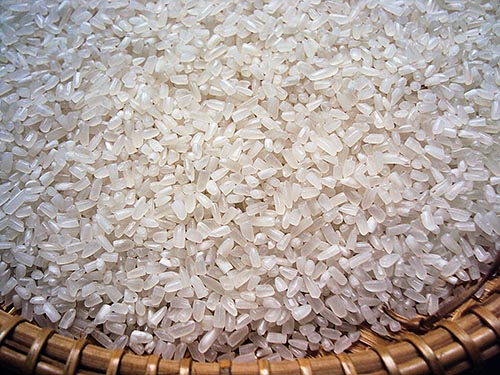 Besides, there are still many preservation chemicals remain in the final products which cannot meet the food safety standard of most western countries. According to a research in Vietnam, there were about 70 million tons of non-organic fertile and 3,800 pesticides (out of 4,000 kinds imported with only 19% of them are bioproducts) used on paddy fields in Vietnam.

Vietnamese Rice and Its By-products Usages

In Vietnam, the rice prices range from at low as VND 12,000 to the highest is VND 35,000. But most households would choose the average kind between VND 15,000 - VND 20,000 to cook their daily meals. You can easily buy them in the local markets or supermarkets. 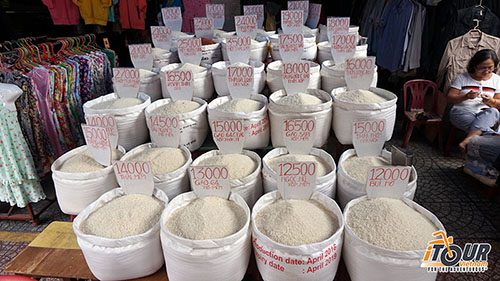 Vietnamese rice in a local market

Besides the traditional bowl of white rice to eat with every family dish, the fried rice and scorched burnt rice is something that would make you fall in love with their smoky smell, flavorful taste, and diverse variation. Rice is also ground, diluted with water, and shaped to make noodles, rice crackers, and rice papers, or fermented to make vinegar and wine. In the past, when there are no office supplies like glue or tape, people use leftover rice to stick papers or letters. 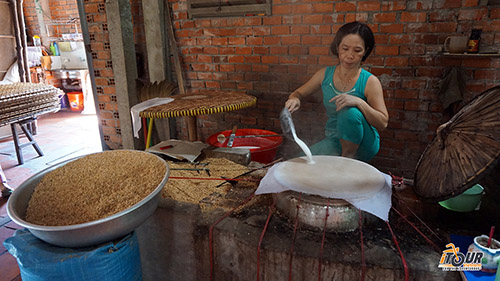 The white rice kernel has many usages, and so does every rice by-product; nothing will go to waste when you are in Vietnam. The straw can be used as fuels in the kitchen, composts, the bed to grow the straw mushroom “nam rom”, or made into fashionable items like a flip-flop or a wide-brimmed hat. The rice husk can be used as solid fuel; the rice bran is mostly used to feed the cattle like pigs. 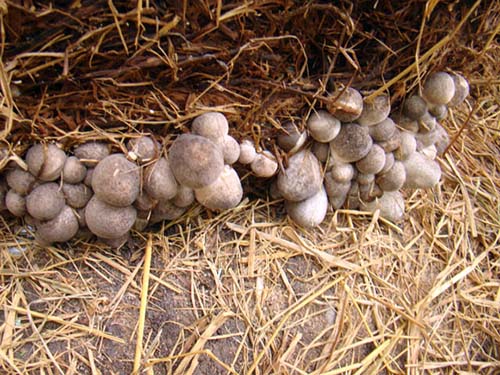 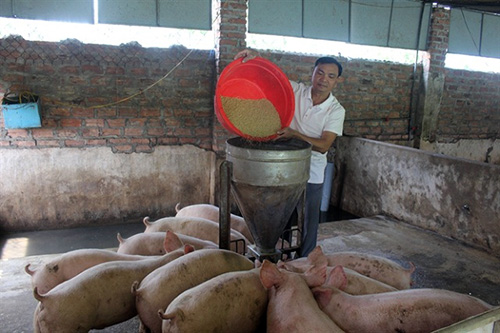 Feed the pigs with rice bran

If you are interested in finding more about Vietnamese cuisine ingredients, check out the extensive guide to Vietnamese vegetables, Vietnamese herbs, fish sauce, and tropical fruits.

I love passing by rice fields in Vietnam, such a sight to see

0 Cancel Reply
I love passing by rice fields in Vietnam, such a sight to see
Cancel Update Comment

A country with its amazing rice dishes