The seventh month in the lunar calendar is a busy time for many Vietnamese since there are two big festivals, the ghost festival, and Vu Lan - a Buddhist event. In fact, these two big days both happen on the 15th of the month. In this guide, we will focus on giving details into Vietnam ghost month. 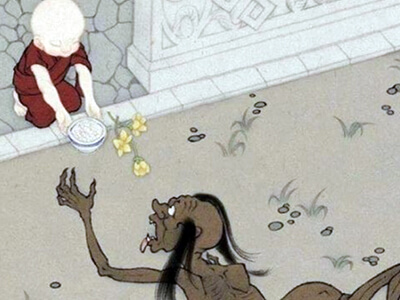 When is Vietnam Ghost Month?

Vietnam's ghost month occurs on the seventh month of the Lunar calendar, which often falls at the end of August in the Gregorian calendar. In Hue, there is another remembrance for the ghosts and spirits of those who sacrificed in the fall of Hue Citadel in 1885, but this is not considered a national festival. According to Vietnamese belief, a human consists of two parts: the soul and the body. When a person dies, the spirit still lingers in the afterlife. If the person did many good things, they would be reincarnated into a person again or a saint. Otherwise, their spirits would be banished to hell and pay for their crimes by being tortured and starved.

Throughout Vietnam's ghost month, the spirits of the dead get to roam in the living world because Pluto, the King of the Underworld realms, opens the gate between the two worlds. This belief is taken seriously in East Asia, including Vietnam, and resulted in many customs and taboos. 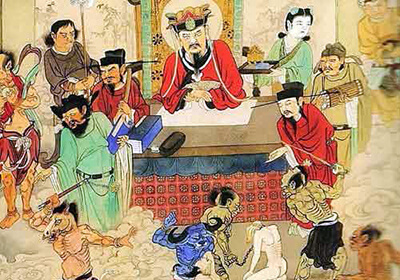 The painting of Pluto and the spirits

On the 2nd day of the Vietnamese ghost month, the Gates of Hell are opened to allow ghosts to access the living world. The spirits of ancestors could trace back to their home from the offerings and prayers of their descendants. Meanwhile, lonely spirits who have no living relatives or died without a proper burial do not have offerings. Revengefully, they angrily curse bad luck upon strangers when they are free to roam in the living world.

Vietnam's ghost month is a unique tradition and has been practiced for centuries. However, not all Vietnamese follow these customs. This belief is taken seriously by some Buddhists and business people in Chinatown in Ho Chi Minh City.

In addition to the worshipping ceremonies, there is a list of things that should and should not do during the month in order to have peace and happiness.

The ghost month is probably the most sensitive and superstitious time of the year because malevolent spirits would look for a chance to capture the souls of the living. This makes Vietnam ghost month a bad time to execute important decisions, such as traveling, moving house, or starting a new business. Below are other activities in the evening and night that are suggested to avoid:

In respective of Buddhism, the Vietnam ghost month is the occasion for children to express their gratefulness to their parents and ancestors, including ones who died. But some of these customs varied geographically throughout Vietnam.

Making a feast of well-prepared food is a popular custom that happens from the 15th day to the end of the Vietnam ghost month. Vietnamese, especially business people in Chinatown in Ho Chi Minh City, believe that the food would help hungry spirits, and thus, these spirits would not mess with their businesses. 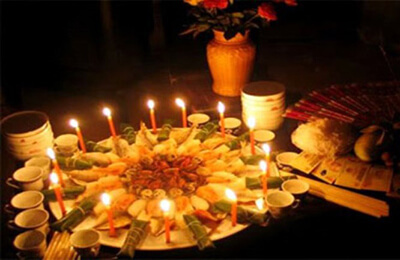 Things that are offered to the hungry spirits

On the full moon day of Vietnam ghost month, Vietnamese families often prepare two feasts during the day. The first one is offered at noon to the spirits of ancestors. The second feast is often offered after sunset for the hungry, wandering ghosts.

Food for the feasts usually consists of rice porridge, sugarcane, confectioneries, fruits (usually include many types of fruits that have 5 colors), and sweet potatoes. Besides the foods, other offerings are salt, votive paper, 3 glasses of water, 3 incense sticks, and 2 candles. Gruel porridge is indispensable because it is believed that the spirits have a narrow esophagus, and thus, cannot swallow hard food. After finishing the offerings, salt and rice are scattered on the road and street to send off the spirits.

Wealthy families and some big businesses, mostly in Chinatown in Ho Chi Minh City, might give away valuable offerings, including small change summing up to a large amount (of millions of VND). Therefore, some people and children usually gather at places where there are generous offerings to snatch cash and food. In Vietnam, this is called "Giut co hon".

Some of them are really serious about this custom since they could earn a great deal while others just join to have fun and not let the offerings go to waste. In addition, business owners often hold the belief it is good luck when people snatch their offerings. 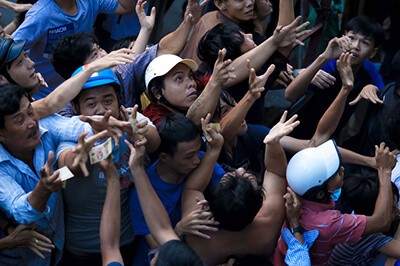 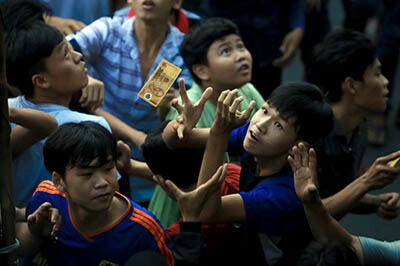 On this occasion, wealthy people also give essential goods, such as rice and noodles, for the poor. 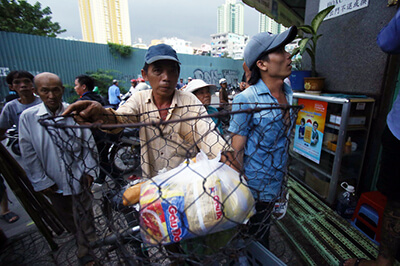 The poor receive essential goods on this occasion

The spiritual existence after one dies is a common belief in any culture, including Vietnam's. There are many interesting rituals and superstitions during Vietnam's Ghost Month that reflect the country’s rich history, diverse culture, and the importance of remembering the dead.

To get a deeper understanding of the Vietnamese culture, history, as well as cuisine, sign up on our professional private guided tours through our Day Adventure Tour and Saigon’s Other Side Motorbike Tour.

Get your Vietnam Travel Insurance below:

No wonder some temples are filled with people sometime. Good to know

I saw people burning stuff and incense on the street at night, it's pretty interesting to know about the local culture

0 Cancel Reply
I saw people burning stuff and incense on the street at night, it's pretty interesting to know about the local culture :D
Cancel Update Comment