Son Doong Cave is currently known as the world’s largest cave. It has impressive size and landscape, and there is also an ecosystem inside the cave. Since its discovery, Son Doong Cave has made it to the covers of nationwide and worldwide newspapers and magazines and continued to be a must-visit destination for the adventurers.

Where is the World’s Largest Cave?

Son Doong is a part of Phong Nha - Ke Bang Massif, located in Son Trach Commune, Bo Trach District, Quang Binh Province, Vietnam. It is an underground system that is connected with other 150 caves in Vietnam, near the border with Laos.

Phong Nha - Ke Bang is where many other world-famous caves are located, a national park in Vietnam, and a UNESCO World Heritage since 2003. The heritage site’s boundary was extended again in 2015 after the discovery of Son Doong Cave in 2009.

How the World’s Largest Cave was Found

Son Doong Cave was an “accidental” discovery. In 1991, a local named Ho Khanh, a logger at the time was looking for the aloe wood deep in the forest and stumbled upon Son Doong’s entrance when looking for a shelter from the strong storm. The cool breeze, strange whistle and roar coming from inside of the cave, and a steep descent have prevented him from going in further.

It was not until a group of cavers from the United Kingdom led by Howard Limbert came to Quang Binh in 2006 that the story about this cave got the right attention. Based on Ho Khanh’s distant memory, Son Doong was still a mystery for another 3 years and once again found by chance in a solo expedition of Ho Khanh in 2009.

About the World’s Largest Cave

Ho Khanh was given the right to name the cave, and he wanted to call it “Ho Khanh”, but after a discussion with the British caves, he agreed to name the cave Son Doong (“Son” means mountain, and “Doong” means river and is also the name of a village near the cave).

Son Doong Cave earned the title of largest cave passage (about 5-km long, 200-meter high and 150-meter wide on average, and the cave can extend further than where the expeditions have found). Together with Sung Sot Cave in Halong, Son Doong is one of the 10 largest caves in Southeast Asia.

There are two entrances to Son Doong; the easier way is through En Cave, a connected cave to Son Doong and also the world’s third-largest cave. The second entrance is through a 90-meter tall calcite wall, so-called the “Great Wall of Vietnam”. 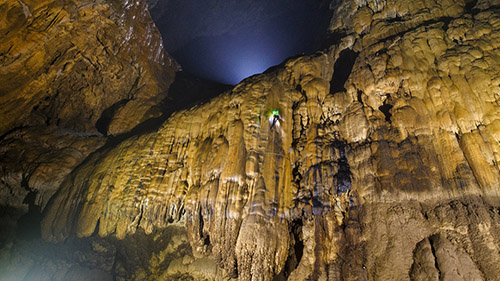 The Great Wall of Vietnam (by Ryan Deboodt)

Son Doong was created about 2-5 million years ago where the river stream eroded the limestone under the surface of Phong Nha-Ke Bang Massif.

The group of stalactites and stalagmites inside Son Doong are enormous, some are as high as 70 meters. The cave pearls (usually about 1 cm in diameter) found in Son Doong, can be as large as a baseball. 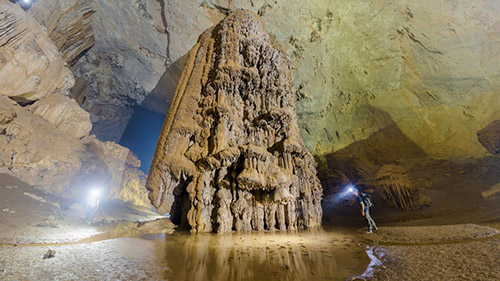 The "mushroom" stalagmites (by Martin Edström) 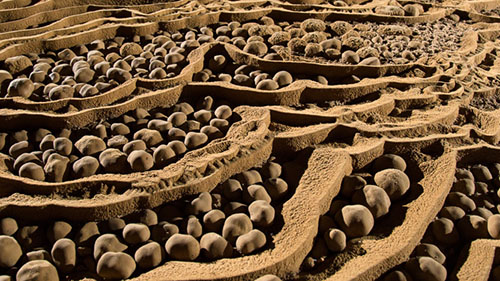 There are two dolines in the caves where the weak roof of limestone collapsed around thousands of years ago. The dolines allow the sunlight and vegetation into the dark cave and grow.

Son Doong has a fast-flowing underground river, its primeval ecosystem, and localized weather inside the cave with diverse flora and fauna life. Unknown to the human for millions of years, the jungles (“Watch out for Dinosaurs” and “Garden of Edam”) here are among the most reserved ecosystems. 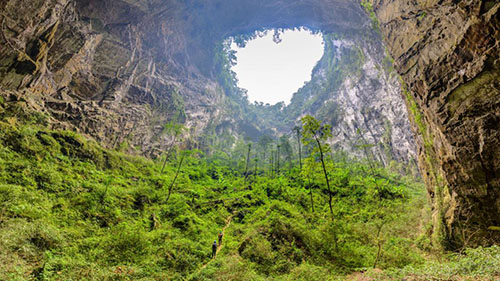 Since 2013, the cave has been opened to the public exploration, but the mass tourism is still under careful observation to protect the sensitive environment inside this cave. There is currently one exclusive tour provider to En Cave and Son Doong Cave.

From 2014 to 2018, projects to develop mass tourism in Son Doong Cave (cable car system bringing tourists straight to Son Doong or En Cave) have faced several oppositions from the environmentalists. The World Heritage Centre and International Union for Conservation of Nature have expressed their concern for the preservation and sustainable tourism development of Son Doong and request the Vietnamese government to cancel the cable car plan permanently.

The best time to visit Son Doong is from January to August because it is the dry season and the time when the exclusive tour is operated. From the beginning of September to the end of December, any tourism activities inside the cave is shut down for the recovery of the ecosystem inside the cave.

Besides the time limitation and strict restriction to protect the environment inside the cave, to conquer this world’s largest cave is no easy task. It demands a lot of physical preparation and of course, no small amount of money to join the adventure.

A tour lasts for about 4-5 days, involving camping in caves, trekking, rappelling, climbing, and crossing rivers. Each tour costs US$3,000/person and only allows a maximum of 10 people, who are above 16 years old and accompanied by a tour guide, porters, cooks, etc.

But if you want to feel the pleasure of witnessing and being embraced by beautiful untainted nature which had been isolated from the outside world for millions of years, Son Doong is a one-of-a-kind experience and a reward for challenging yourself.

Another way to see the inside of this beautiful cave is to watch the 360 experiences:

Get your travel insurance for traveling Vietnam:

© Written by Nhi Nguyen for itourvn.com