All You Need to Know about The Weather in Hanoi Hanoi and Ho Chi Minh City are the two major metropolitans worth mentioning when talking about Vietnam; the capital Hanoi, however, bears stark differences from the city in the south, namely the distinctive climate. If Ho Chi Minh City has only two seasons, which are rainy and dry, Hanoi has four seasons in a year: spring - summer - autumn - winter. Each season in Hanoi has a unique charm which offers special experience every time you set foot to the city.

Spring in Hanoi is the time for enjoying the beauty of Hanoi in full bloom as well as cultural exploration. 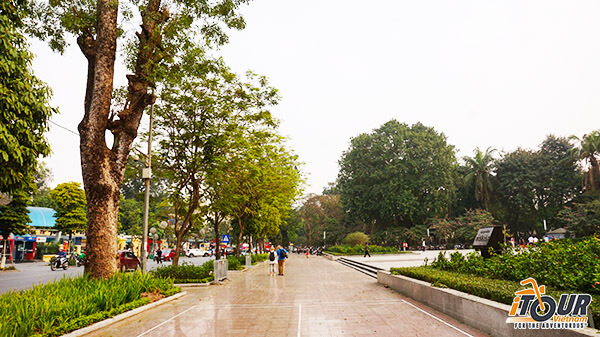 The most beautiful season starts from February to the end of April and is the wettest season of the year. At this time, the weather in Hanoi is generally warmer than the winter; the highest and lowest temperatures are 28 Celcius and 18 Celcius respectively (82°F and 34°F). During this time, it rains a lot in Hanoi, but mostly drizzle. Therefore, no need to worry about having less fun, the rain actually creates a more refreshing atmosphere and a romantic scene - which suites perfectly to the vintage background of the city. 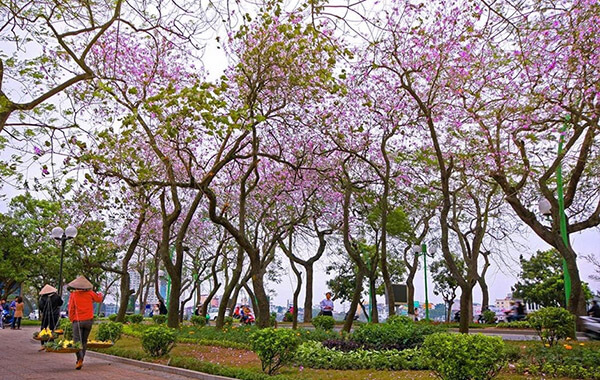 The spring in Hanoi stands out with the flowers in full bloom.

Hanoi's spring embraces the most important holiday to the Vietnamese - the Lunar New Year, or Tết - when you can witness how the Vietnamese traditionally welcome the new year. Spring is also the season of festivals in northern provinces of Vietnam, so it's the best time to plan a quick day trip from Hanoi to take part in Huong Pagoda Festival (in My Duc District, Hanoi) or Hung Temple Festival (Phu Tho Province).

The Weather of Hanoi in Summer

If you're not used to the tropical weather, the intensive heat during the summer in Hanoi may put you off. However, if you're up to the challenge, there are a plethora of amazing things waiting to be discovered during this time of year in the city. 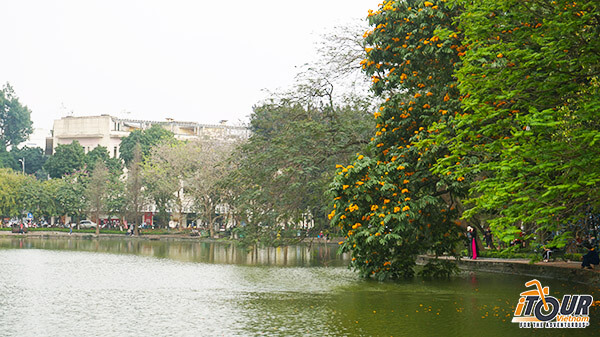 Summer in Hanoi starts in May and ends in late August. The summer in Hanoi is scorching, and the broiling feeling is even more intense than that in Ho Chi Minh City. The temperature of Hanoi during this period ranges from 27 Celcius - 40 Celcius (80 °F - 104 °F). Along with the urban effect of a populated city, the oppressive heat is even more apparent. However, like Ho Chi Minh City, it also rains a lot in the summer, mostly showers and happens in the late afternoon. Around August, Hanoi usually has storms, mainly heavy rains instead of dangerous natural phenomena. 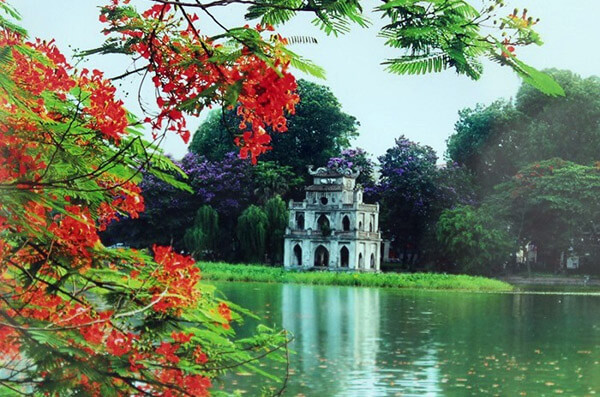 Hanoi in the summer.

It may be the smartest way to hide from the extreme heat in the resorts in the outskirts of Hanoi such as Soc Son, Ba Vi, or Tam Dao. These are all famous eco-tourism areas with magnificent natural landscapes and a cool climate compared to the city. There are famous beaches near Hanoi such as Ha Long or Do Son, but these places can get over-crowded during this season, and it is not advisable to go during the stormy weather, particularly in August.

See more: Why You Should Visit Hanoi in the Summer.

About the Weather of Hanoi in Autumn

Autumn is the iconic beauty of Hanoi since the season sets a mellow mood that fits so well with the dreamy scene of the ancient city. Autumn in Hanoi begins in September and ends in October, so apparently, it does not last for too long, yet it is a memorable time for anyone who has ever been in this city. In the autumn, the weather in Hanoi is delightful, as the temperature ranges between 23 Celcius - 32 Celcius ( 73°F - 90°F). With little to no rain and not so much sunshine, together with the clear sky and the chill breeze, this is when Hanoi relentlessly captures the hearts of poets and songwriters. 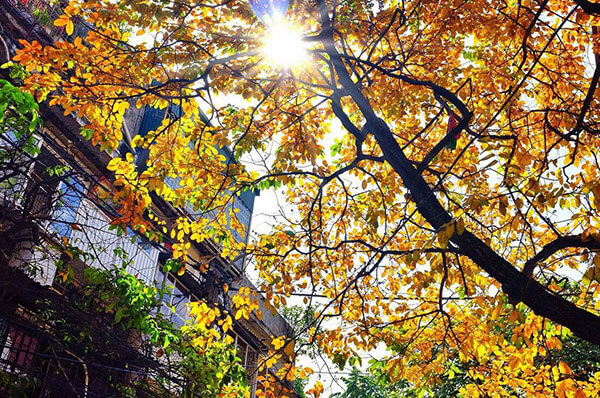 Autumn is the most beautiful time in Hanoi.

In the autumn, Hanoi emerges as an ancient and peaceful city. The best way to experience the season is by visiting the most favorite streets in Hanoi to see the falling leaves. Don't forget to take the time to stroll in the Old Quarter area and visit popular landmarks as well as enjoy the food here. Try getting up early in an autumn morning, stopping by a roadside coffee shop and sipping a cup of coffee; this is the most authentic local way to have a feel of the city. 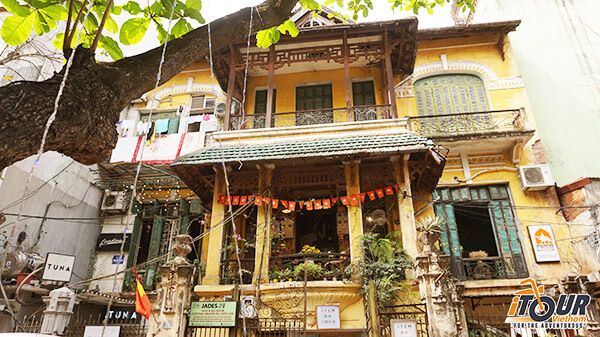 The weather and the old buildings blend amazingly together.

What to Know about The Weather in Hanoi in Winter

Winter in Hanoi is the coldest season of the year, starting in November and ending in January the following year. Unlike Ho Chi Minh City, the cold winter in Hanoi is much more obvious. Although the temperature does not drop too low as it often ranges from 11 Celcius - 23 Celcius ( 52°F - 73°F), the feeling of coldness in Hanoi is no less than that in North Asian countries, mainly because of the drizzle and strong wind blowing. 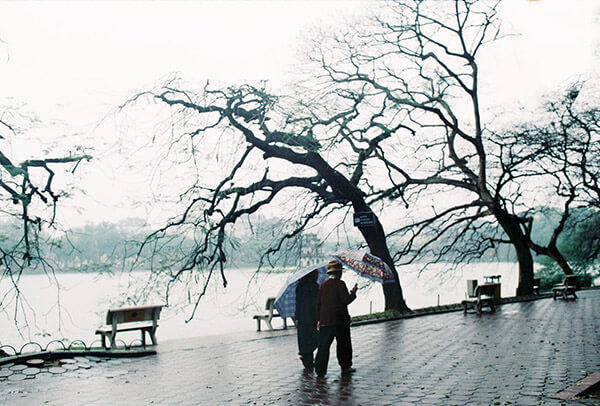 Hanoi in the winter.

Coming to Hanoi in winter, the best thing to do is to enjoy the street food here. In the morning, when the weather is still chilly, enjoying a bowl of Hanoi Pho will warm you up from the inside. And in the evening, stop by a roadside stall - which can be easily spotted on any street, that sells grilled corn, roasted sweet potatoes, have a bite of hot pice of potato, and chat with friends. This is indeed something special that can't be found anywhere else outside this beautiful city. 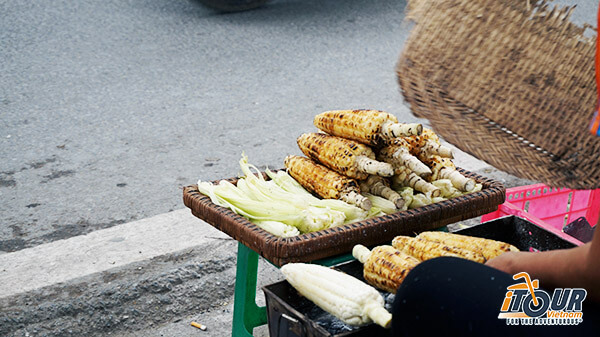 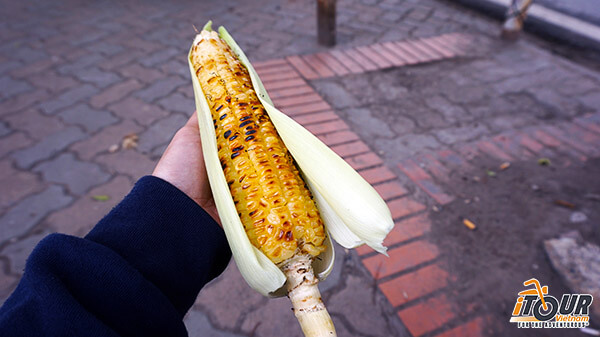 Grilled corn is simple yet tastes delightful in cold weather. 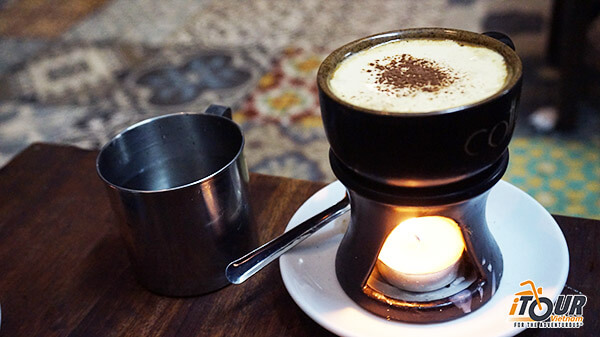 A cup of egg coffee in a chilly morning.

See more:
When is the Best Time to Go to Hanoi?

Summary on The Weather in Hanoi

To truly take in the beauty of Hanoi, one must learn about the weather here. Whether coming to Hanoi at any time of the year, you will still have the opportunity to explore the many sides of Hanoi and enjoy your trip to the fullest.

Get your travel insurance to visit Hanoi: