The Meanings of Vietnam's Flag The flag of Vietnam has always been the national pride of many Vietnamese. It had been changed many times through the course of history, especially during the Vietnam War. Each has its own special meaning. If you are interested in Vietnam’s flag, this article will help you understand more about the history and meaning of Vietnam’s flag.

The History of Vietnam's Flag

Throughout feudal dynasties in history, the flag of Vietnam had changed many times and disappeared for sometimes when the country was under colonization. Until 1940, the red flag with a central yellow star first appeared in some local revolutions against the French colonial government in the South of Vietnam. It became the flag of the Viet Minh forces that was established by the leader Ho Chi Minh in 1941 to support the locals in the war against the French.

In August 1945, in the meeting of the National Assembly, they decided to choose the red background and yellow star banner as the official flag of the entire revolution over the whole country. After the victory of the revolution in August, on September 2nd, 1945, the flag officially became the government flag of the Democratic Republic of Vietnam in the North while the President read Vietnam's Declaration of Independence. In 1976, The United Nations Organization officially recorded the flag as the national flag of Vietnam recognizing it as an independent nation in the world.

On the other side, the South government had its own flag; many Vietnamese still remember this flag as "the three stripes". It had a yellow background with three parallel red lines in the middle and was inspired by revolutionary flags of many dynasties in Vietnam's history. The use of this flag in the Socialist Republic of Vietnam is banned with the exception of illustration in films and movies. 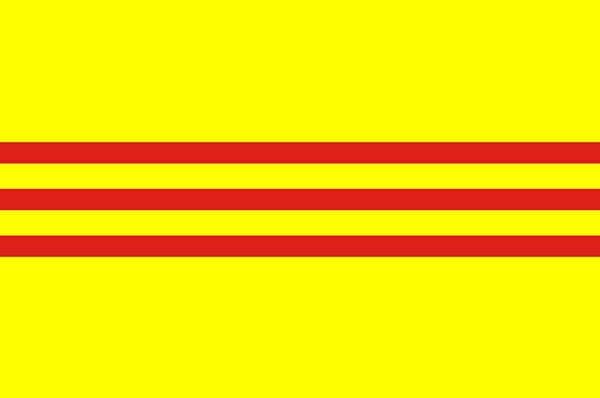 Flag of the Republic of Vietnam 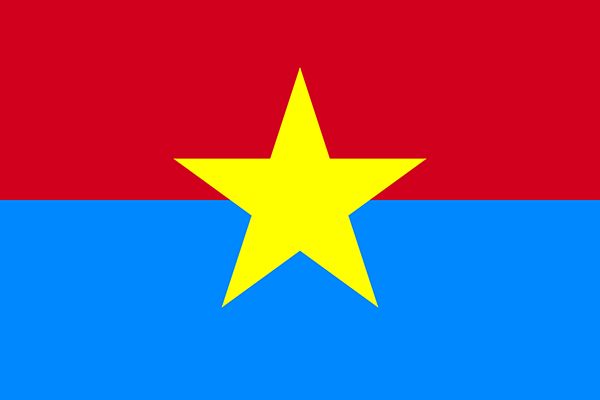 This is the banner of the National Liberation Forces of Southern Vietnam. The forces established a new government, the Provisional Revolutionary Government of the Republic of South Vietnam, in Southern Vietnam as opposed to the Republic of Vietnam. This flag was adopted from 1960 to 1975, derived from the red flag and the central yellow star of the independent government in the north. The red part stands for an independent part of Vietnam; the blue symbolizes the hope for peace and independence for the people in the south of Vietnam at that time.

On April 30th, 1975, this flag was taken to the top of the Independence Palace when the Vietnam War ended reunifying both north and south. After the historical event, the two revolutionary flags were still hung in offices of the government and schools. On July 2nd, 1976, Congress decided to unified the Democratic Republic of Vietnam and the Provisional Revolutionary Government of the Republic of South Vietnam into the Socialist Republic of Vietnam, the official flag that they chose was the flag below, a red background with a yellow star in the center.

The Appearance and Meanings of Vietnam’s Flag 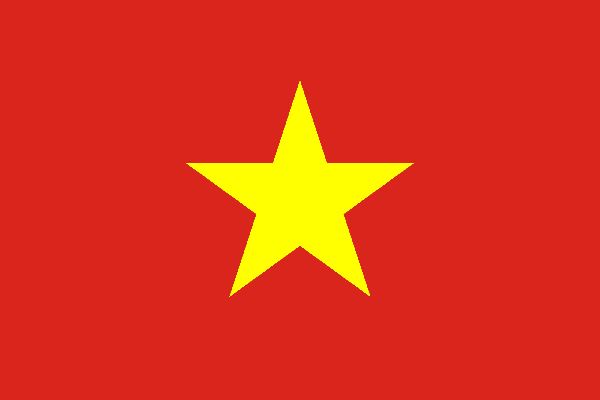 This is the official flag of Vietnam at present

What you see in Vietnam's flag is quite simple, a yellow star on a red background designed by Nguyen Huu Tien. In fact, the meaning of Vietnam’s flag lies in the five-pointed star which stands for the five primary classes in the society at the time: the scholars, the peasants, the artisans/craftsmen, the traders, and the military. As for the red color of the background, it symbolizes the fights and victories in the wars throughout the history of Vietnam. Another meaning of Vietnam’s flag is to remember the Vietnamese soldiers who sacrificed themselves to protect the peace and independence of the country. 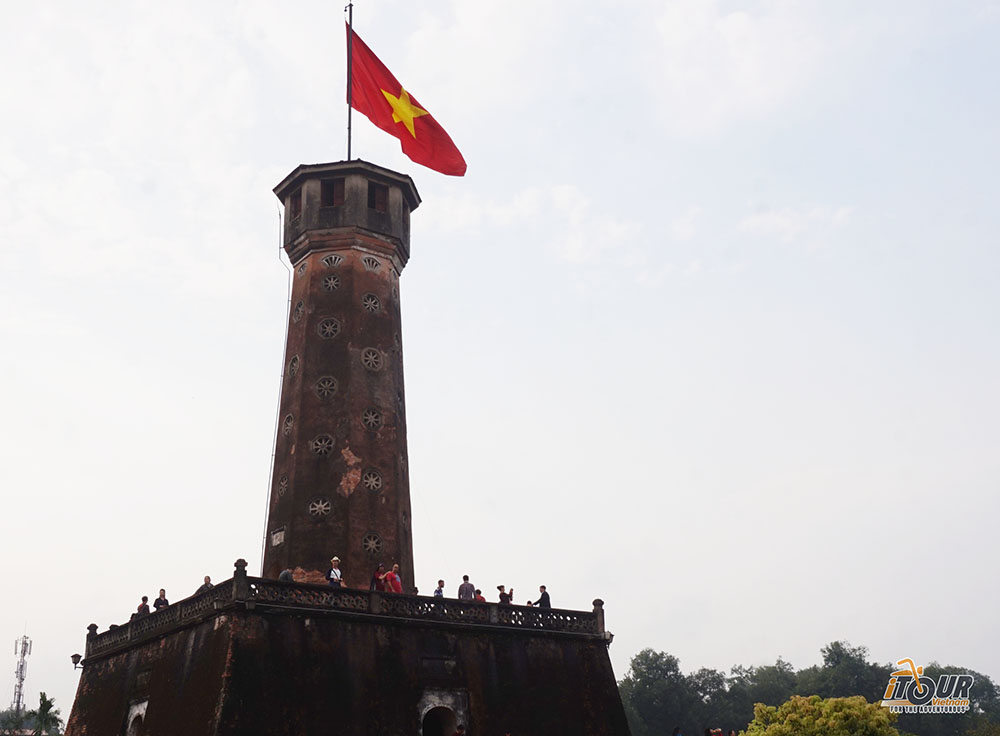 On every special national holiday in Vietnam such as Reunification Day, Independence Day, Tet holidays and traditional festivals, locals proudly hang their flags outside of their houses. 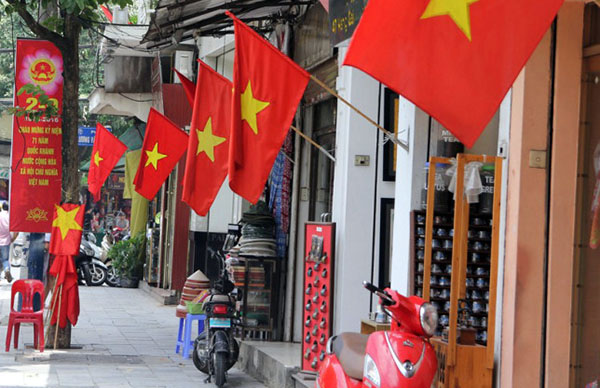 Hanging of the national flags outside of homes

Nowadays, when you travel to the country, you will easily encounter symbols of the flag printed on t-shirts and some items in souvenir shops. There are several vendors in Ben Thanh Market selling printed t-shirts where you can buy one with Vietnam's flag on it. Vietnam's flag is always the pride of every Vietnamese, so people often wear the flag to celebrate when they achieve any special medals in international competitions like sports and beauty queen’s contests. 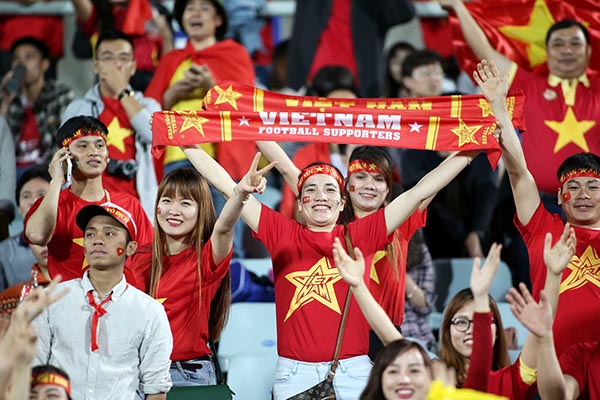 Conclusion on the Meanings of Vietnam's Flag

Like the official flags in other countries, Vietnam’s flag is meaningful and people always take pride in it because it reflects the historical events and represents all races and classes in the country.

oh now I know why people hanging their flags

Such a long history in the "yellow on red" iconic flag of Vietnam.