The Meanings Behind Vietnamese Banknotes

As of 2018, there are currently 12 types of Vietnamese banknotes in circulation printed by the State Bank of Vietnam. Each of these Vietnamese Dong (VND) has a different color and shares the same image on one side of the note: a picture of Ho Chi Minh, one of the most famous Vietnamese people. The opposite side, however, has distinguishable pictures of either historical sites, scenic places or economically essential constructions.

Vietnamese banknotes from the order of the highest to the lowest value: 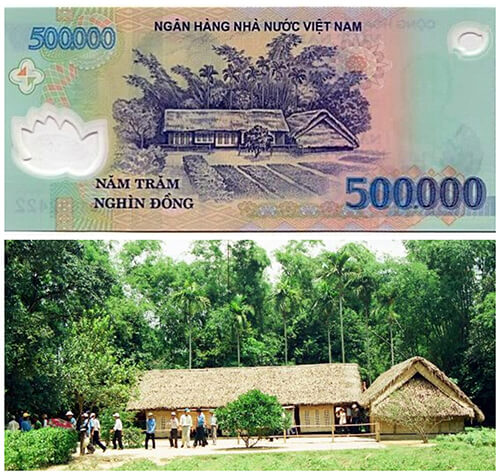 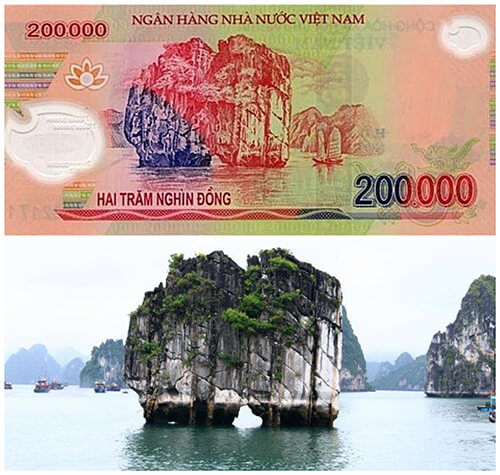 Van Mieu - Quoc Tu Giam, or the Temple of Literature, is represented on the VND 100,000 banknote. Considered as the first university of Vietnam, it is one of the iconic sites of Hanoi, the capital of Vietnam. 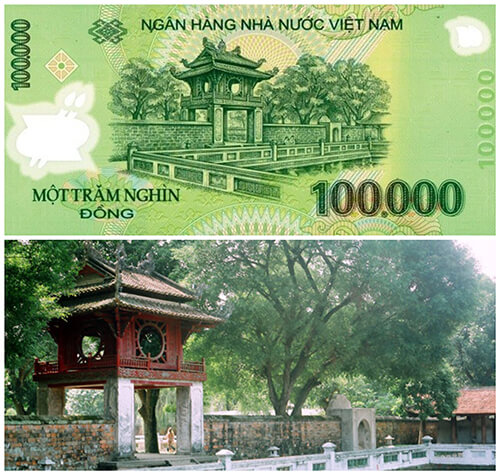 The VND 50,000 banknote is marked with two historic sites in Hue. They are Nghenh Luong Dinh (Luong Dinh Welcoming Pavilion), the resting place of the Nguyen King before the dragon boat cruising on the Perfume River, and Phu Van Lau (Pavilion of Edicts) where, in the past, the locals could read announcements from the government. 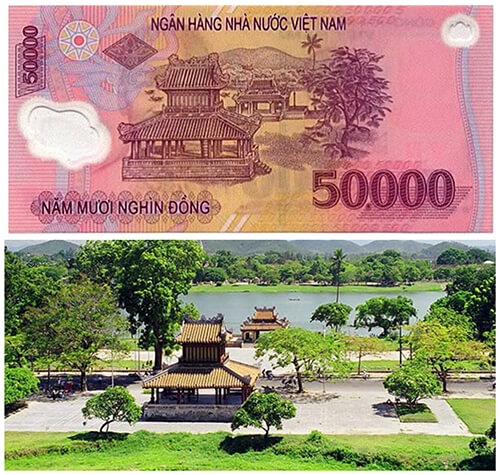 Commonly known as the Japanese Covered Bridge, this 18th-century landmark can be found in Hoi An, an ancient town in the Central of Vietnam. 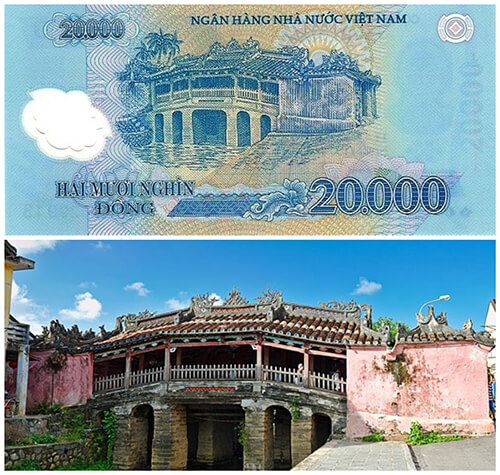 Take a look at Hoi An Travel Guide to know more about this scenic ancient town.

Printed on the VND 10,000 banknote is the White Tiger Oil Field, which is the largest oil field supplying the majority of oil for Vietnam. 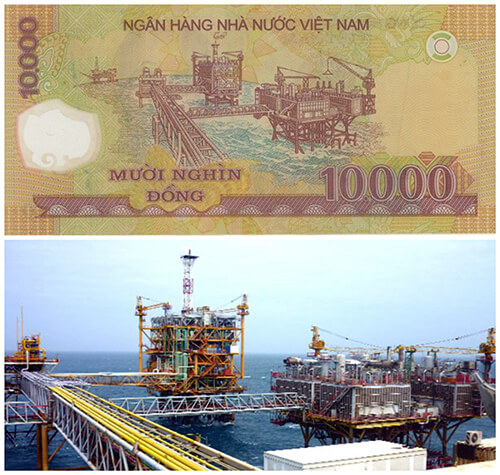 Located in Dong Nai Province, Tri An Hydroelectric Power Plant is represented on the VND 5,000 note. This was considered as a recognition of the Soviet Union’s support to build this plant. 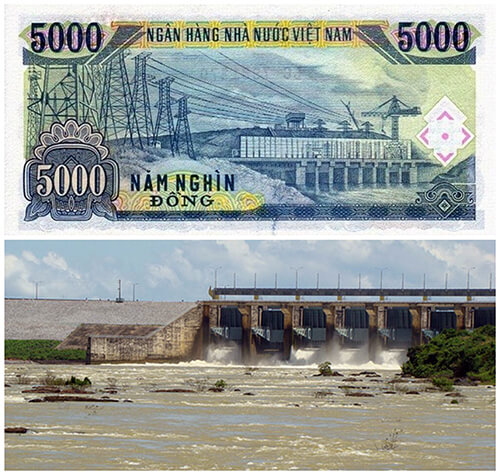 Fun fact: The text “Cộng Hòa Xã Hội Chủ Nghĩa Việt Nam” (means the Socialist Republic of Vietnam) can be found more than 10 times on this note. The exact number is still being argued since the State Bank does not give out any official statement, but many people believe it is between 13-15 times.

The image on the VND 2,000 note is of the female textile factory workers in northern Vietnam at Nam Dinh Province. This was the largest textile factory of Indochina during the French colonization period. Like the ones on some other Vietnamese banknotes, the image depicts a noticeable milestone in the development of the Vietnamese economy as well as society. 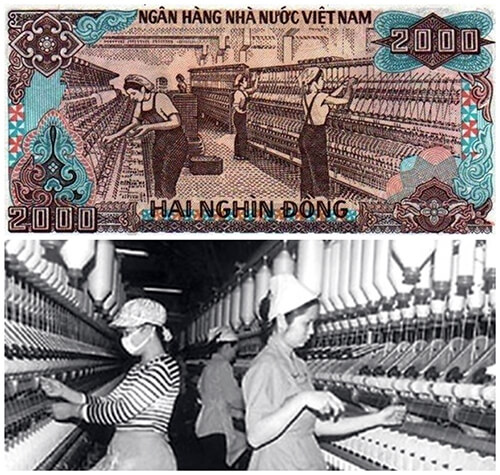 The VND 1,000 note has the image of locals using elephants for logging in Tay Nguyen Province.

On the VND 500 note is the picture of Hai Phong Port, part of a port complex in Hai Phong - one of the major cities in Vietnam. It is the second-largest national port and an international gateway to Vietnam. 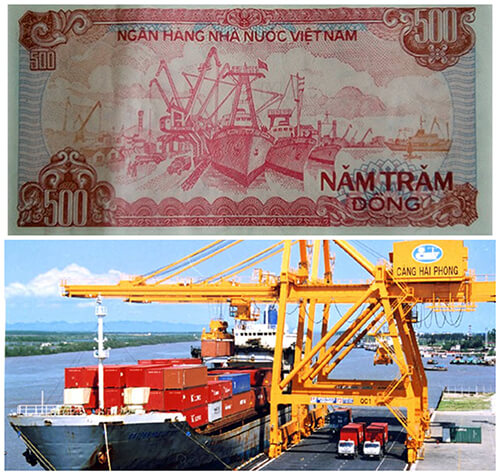 One side of the VND 200 note captures a working scene of Vietnamese farmers on a rice field. This image tells the characteristics of Vietnam of how agriculture has played an important role in our economy, and how rice is a crucial stable food throughout thousands of years.

Among the Vietnamese banknotes, the VND 100 is the one that is least used and seen in circulation due to its limited value. It has the image of Pho Minh Temple, a 7th-century temple in Nam Dinh Province. One of the Four Great Treasures of Annam - the former name of Vietnam during the feudal dynasties, Pho Minh Caldron was placed in this temple before the Ming invasion destroyed it. 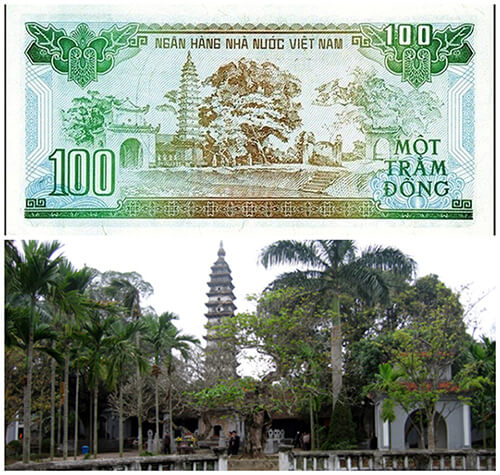 The VND 200 and 100 are no longer in use. The VND 500 banknote is a fairly small change, so when shopping, some retailers might give other small merchandise such as a packet of sugar instead of VND 500 as changes

Summary of the Meanings Behind Vietnamese Banknotes

The meanings behind Vietnamese banknotes are about appealing sites such as historical places, beautiful landscapes, or significant constructions. They all show some of the Vietnamese characteristics in different stages of development. If you get a chance to get a hand on one of these notes, which make great souvenirs, you can show off and tell your friends that all of the Vietnamese are millionaires and billionaires.

Visiting Vietnam? Check out our food tour for an authentic local experience with some must-try Vietnamese foods before you die!

Get a quote for your Vietnam Travel Insurance:

Wow, so incredible, I didn't know the banknotes have so much meaning