The Lotus Symbol in Vietnamese Culture The lotus is an iconic flower of purity and appears in many ancient Asian cultures. This is a kind of special flower that people love and idolize, especially in Buddhist culture. The lotus symbol in Vietnam is the icon of Vietnamese characters and has interesting meanings in various aspects such as culture, arts, and foods.

Although other flowers are more beautiful and aromatic than the lotus, the flower of the lotus was chosen to be the Buddha's altar because of its philosophic meanings relating to the elegance and good behaviors of human beings that Buddha tried to teach.

Firstly, the lotus' growing periods can be understood as a representative of five characteristics, purity, cleansing, demureness, intactness, and perseverance. The lotus grows from dark marshes and tries to get above water surfaces to receive sunlight and fresh air, but it is not stained by dirty mud (purity). When fully grown, it purifies the water around it (cleansing). Besides, the lotus lets off an elegant, light, and mild fragrance (demureness). During its entire life, no insects take the lotus nectar, although the lotus flower is beautiful and has a fragrant scent (intactness). And despite the hard conditions of its development, the lotus still blooms into gorgeous flowers on the lakes (endurance). These are the deep messages which Buddhists recognized all through the picture of a lotus. 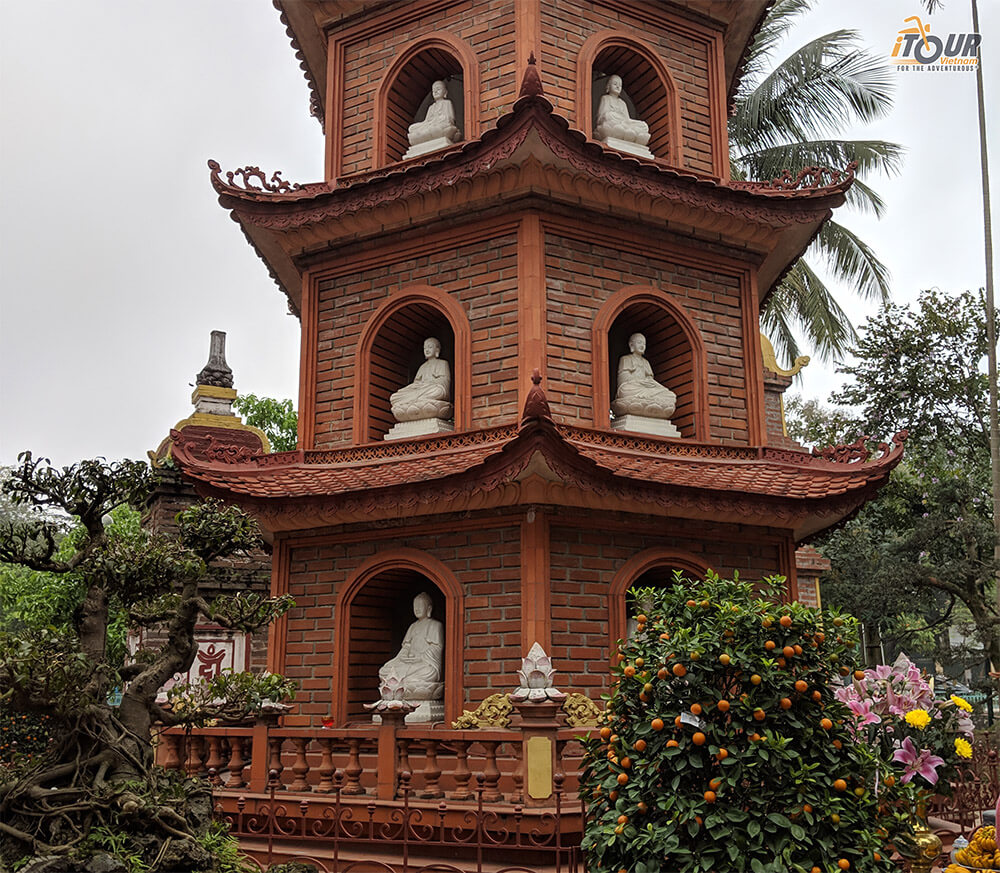 The picture of the lotus is also similar to the yin and yang philosophy. The flowers bloom entirely above the water, which is yang, while the rest of it underwater is a representation of yin. With this, the lotus as a whole is a perfect combination of yin and yang, of the sky and the earth.

Read more about Religions in Vietnam 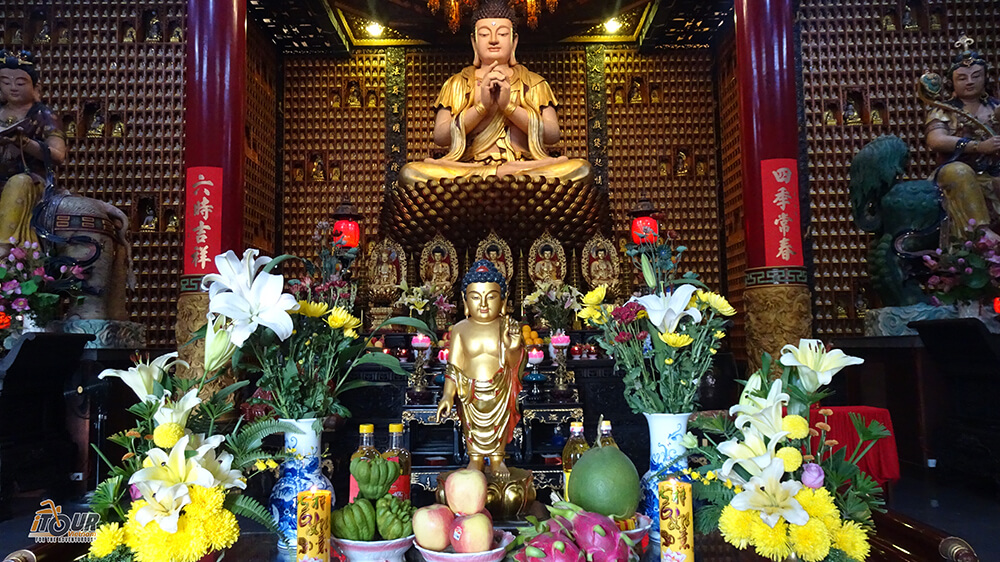 Lotus as a Symbol of Vietnamese Characters 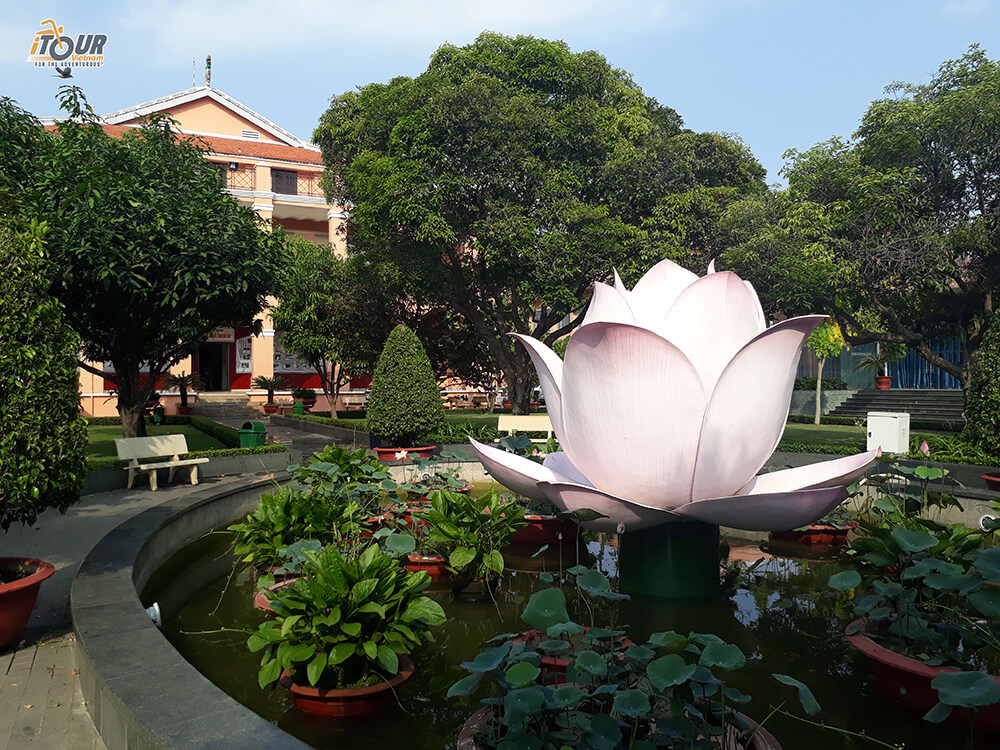 Lotus flowers germinate inside the mud, they purify soil to get all nutrients and rise up above the water to show its beauty. The five characters of its growing periods (purity, cleansing, demureness, intactness, and endurance) are also used to describe the Vietnamese characters and as a guideline for the desired behaviors. Throughout Vietnam's history, from Chinese domination to the Indochina Wars, the Vietnamese tried to fight persistently and aggressively against the enemies to protect their countries. However, their lifestyle is simple; the Vietnamese always try to be friendly and kind to one another. Besides the traditions of persistence and humility, other characteristics like grace and diligence are always praised and taught to children by their parents or grandparents. 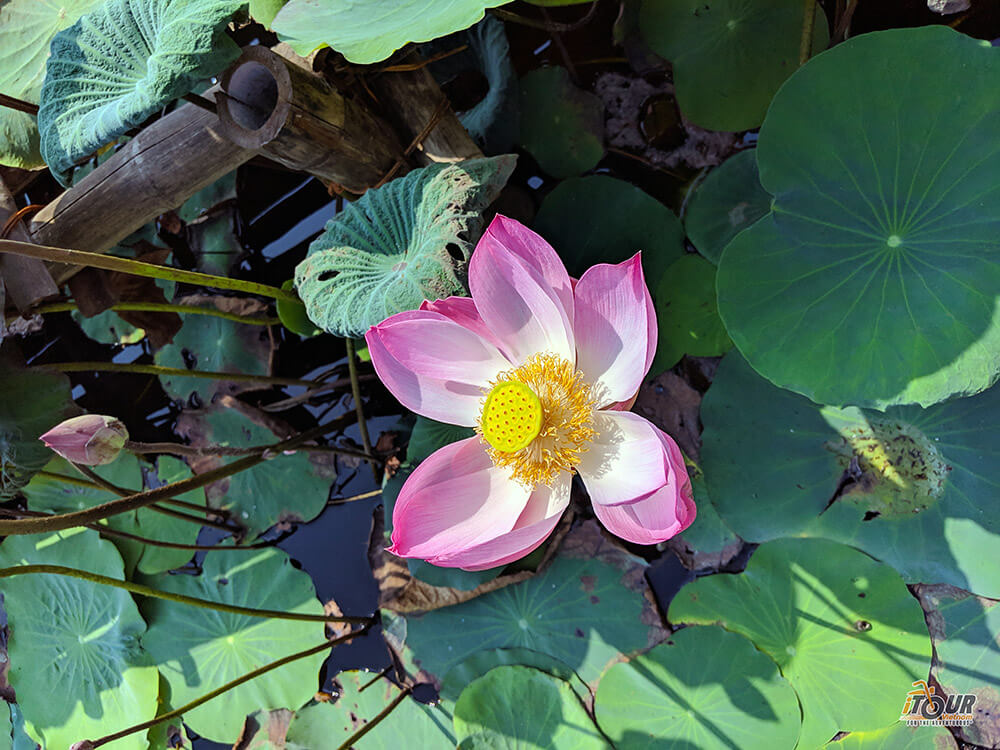 The lotus hasn't been officially recognized as the national flower of Vietnam despite its dominance in many votes for this position. But its image is still widely attached and associated with the country and has become the logos of many Vietnamese brands. For instance, the company of Vietnam Airlines officially used the Vietnamese lotus symbol to advertise its brand. Around the world, tourists can easily recognize airplanes that bring a meaningful message to many places. 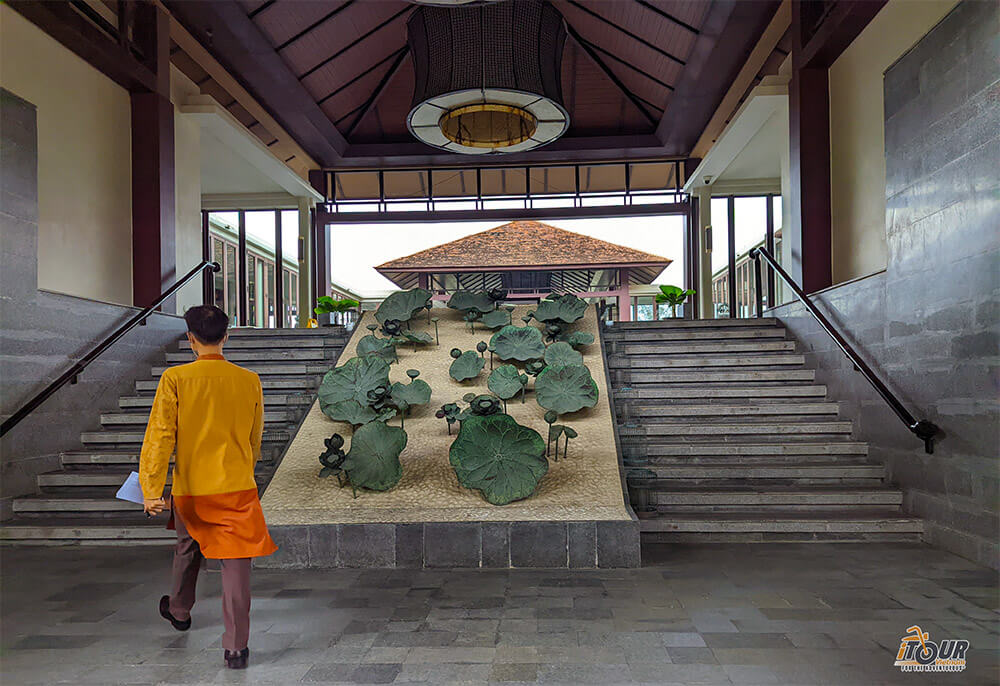 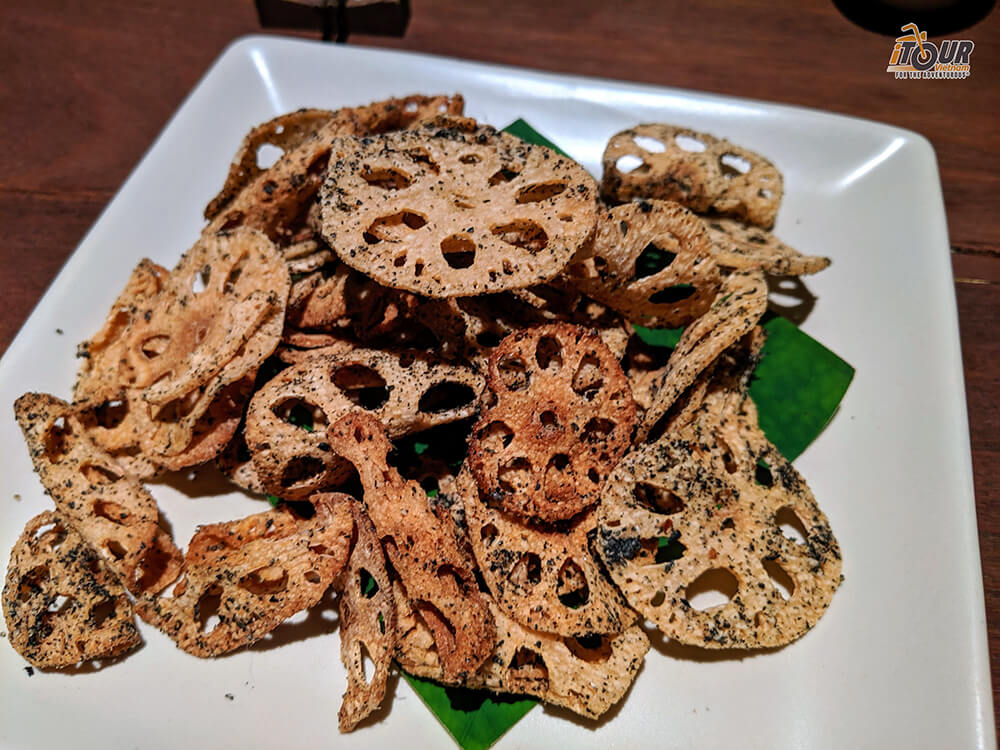 Fried chips made from the lotus root 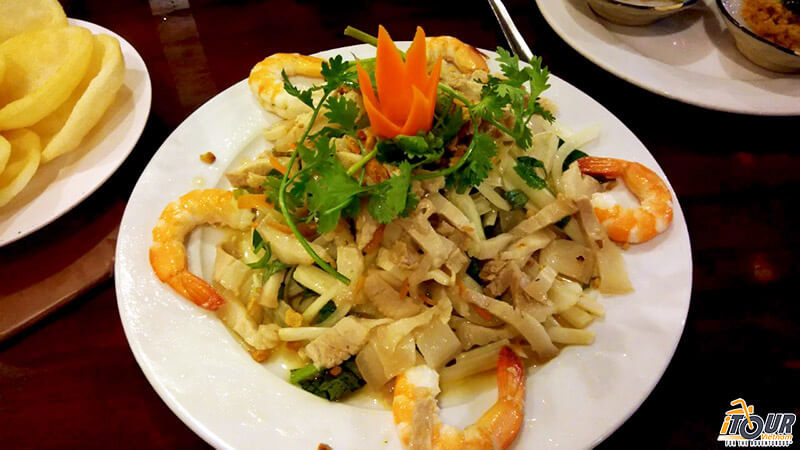 Vietnamese salad with the lotus stems

In Vietnamese cuisine, the lotus is one of the special natural ingredients that are used for cooking lots of traditional food. Besides, it is also used as an effective medicine that can cure some sicknesses according to the Eastern medicinal approach. For example, the lotus pods are often assembled to help people decrease their high blood pressure or to stop bleeding. 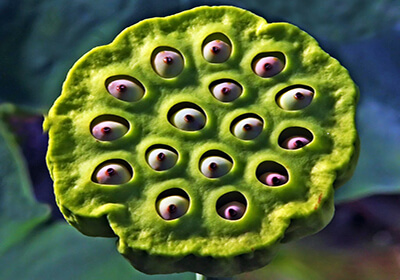 Picture of a lotus pod

Other parts of the lotus can be the main ingredients used to cook some traditional food and drink, such as Vietnamese salad and lotus jelly. In Hue, the leaves of the fragrant lotus flower are often used to brew tea overnight. This was one of the favorite drinks served in Vietnamese royalty and was used to dedicate to kings in the past. In the northern region, the lotus leaf is an unchangeable ingredient to use as a wrapper for “Com” (green sticky rice) because only lotus leaves can preserve the original taste and aroma of the sticky rice. The color green of the leaves is to decorate and makes the dish looks more attractive. 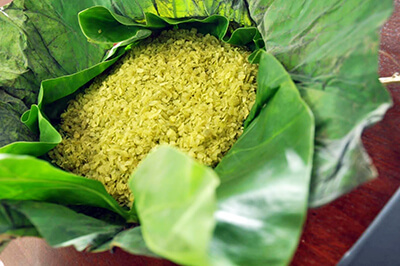 The root, seeds, and plumules are other parts of a lotus used to cook lots of delicious Vietnamese food. For example, its root and seeds could be used to cook an appetizing sweet soup or make a refreshing salad; it contains a large percentage of vitamins and minerals that are good for your health. Besides, the bitter lotus plumules inside the lotus seeds are often soaked in boiled water to make a medical drink that decreases your internal heat and thus, relieves the cold. 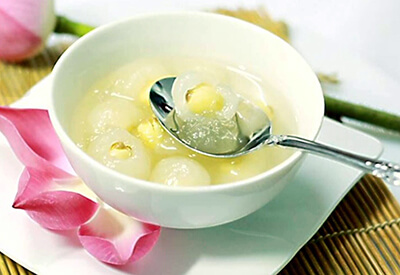 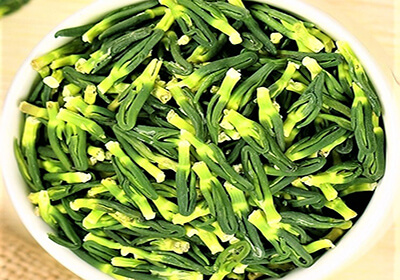 The lotus flower image in ancient Buddhist Vietnamese architecture was always a holy icon. The most prosperous periods of Buddhism were in the Ly Dynasty in the 11th century. Many temples, pagodas, and shrines were decorated with patterns of lotus flowers on the walls and statues inside them. One architecture that still lasts today is the One Pillar Pagoda. But in Hanoi, one more pagoda is famous for its lotus symbol, the Kim Lien Pagoda (the pagoda of golden lotus). This one was built and designed around the 17th century. 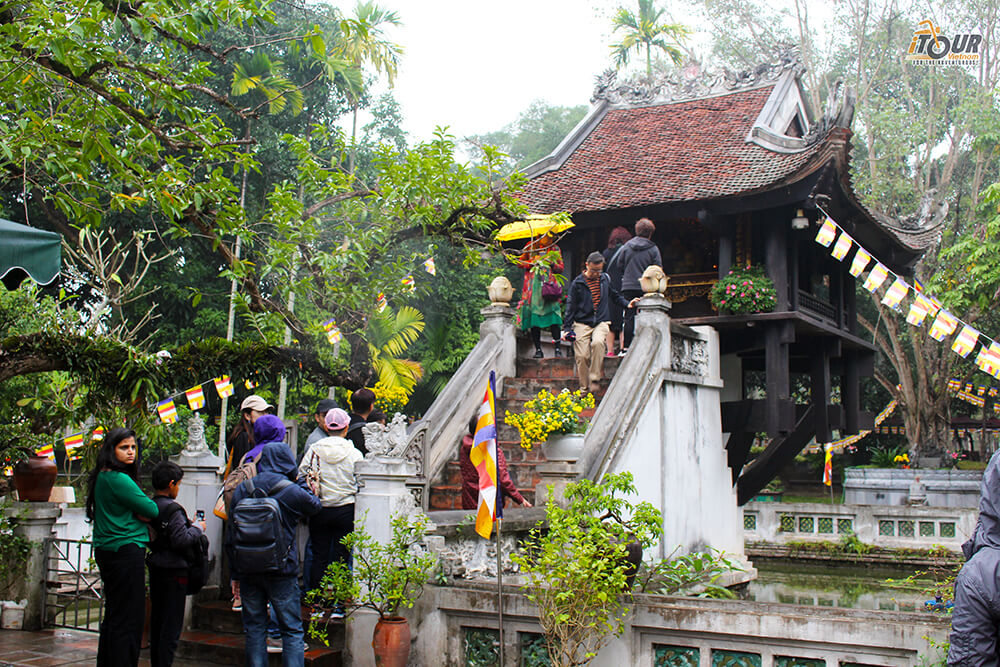 One Pillar Pagoda in Hanoi

Here is a Vietnamese folk - song praising the beauty of lotus:

In the marsh, there is nothing as gorgeous as the lotus. Its combination of colors (green leaves, white flowers, and yellow nectar) is perfect. And its fragrant aroma overpowers the smell of the muddy water.

From then till now, many poets and writers have always adored the lotus symbol in Vietnamese culture. Below is another poem that uses the elegant beauty of the lotus to compare and praise the characters of president Ho Chi Minh.

Summary of The Lotus Symbol in Vietnamese Culture

Most Vietnamese were prideful when the lotus became the national symbolic icon of Vietnam. Not only is it a beautiful flower with a great combination of colors, but the lotus also represents the most desired characteristics of a Vietnamese, like grace, diligence, humility, and perseverance. Therefore, with friendly and good-natured people, Vietnam welcomes people from all over the world to visit their country.

Find out more Vietnamese culture and travel information in our guide!

Wow I didn't know Vietnam also lots of dishes made from lotus. Can you recommend where to try some?

0 Cancel Reply
Wow I didn't know Vietnam also lots of dishes made from lotus. Can you recommend where to try some?
Cancel Update Comment

I love the rice wrapped in lotus leaf