The Last Helicopter Out of Saigon It was the beginning of the end of the long and exhausting Vietnam War. The People’s Army of Vietnam (PAVN) was marching towards the South. The Army of the Republic of Vietnam (ARVN) was faltering. America, which had predicted the collapse of the South Vietnamese government, was in preparation for evacuating American diplomats, staff, and employees. They were ready to finally end their days in Saigon, Vietnam. The day when the last helicopter out of Saigon flew its wing, many probably witnessed it as their longest day. Here is the story.

The Leading up to the Last Helicopter out of Saigon

The Paris Peace Accords aimed to put peace in the whole of Vietnam (North and South) with the US halting their bombing and fire and the PAVN stop their marching and influence in the South of Vietnam. There were peace talks and several to put the peace accords to work from the mid-1960s. The four parties involved in the accords were the Democratic Republic of Vietnam (North Vietnam) and the People's Liberation Armed Forces of South Vietnam on one side, and the US and Republic of Vietnam (South Vietnam) on the other. However, there was no progress until January 27th, 1973, when the Paris Peace Accords were finally signed.

According to the Paris Peace Accords, a cease-fire was agreed upon but then promptly violated by both sides. Despite Nixon's promise of assistance to the South to convince them into signing the Accords, the US Congress passed legislation that effectively withdrew all US troops from active combat. The South Vietnam army, despite getting expensive equipment from the US, failed to properly utilize them due to various reasons like lack of training and heavy dependence on the US. The first victory for the People’s Army of Vietnam was at Phuoc Long Province on January 6th. Picking up on that momentum, the PAVN soon took over the Central region of Vietnam, from Buon Me Thuot to Hue and Da Nang in March. 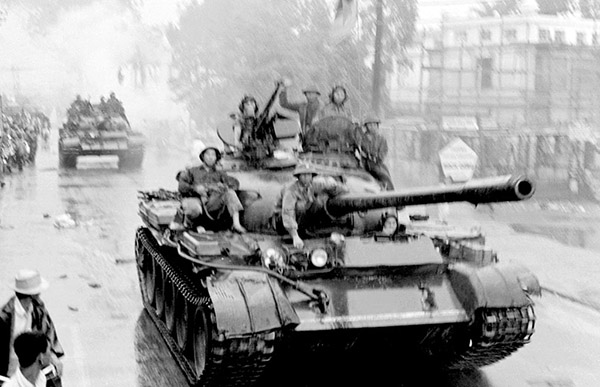 The PAVN tank on its way to liberate Da Nang

On April 26th, 1975, the final campaign to finally unite the country began. It was named the Ho Chi Minh Campaign. The South Vietnam remaining territories were under attack from various directions. On April 29th, through decisive strength, the route to Saigon was opened wide. Finally, after clearing out their route, at 11:30 AM, April 30th, 1975, a T-54/T-55 tank numbered 390 crashed through the gate of the Independence Palace. A second tank number 843 got stuck in the side gate. A crewman jumped out, carried the flag of the Provisional Revolutionary Government, and flew it on top of the Independence Palace. The South Vietnam government unconditionally surrendered. The flag waving in the wind signaled the end of a long-standing conflict and the unification of the country. 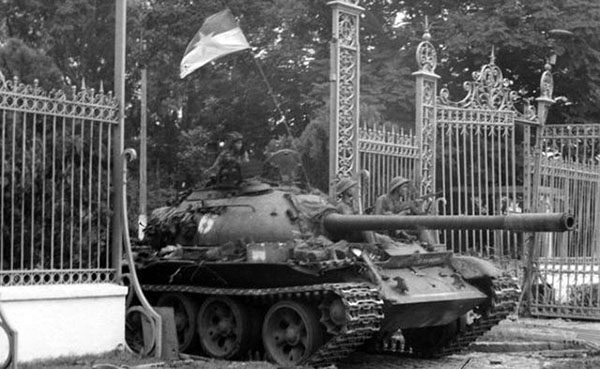 The tank that crashed through the gate

The Day of the Last Helicopter out of Saigon

The name was Operation Frequent Wind. It is recognized as the largest helicopter airlift in history. The operation was carried out between the 29th and 30th of April, right at the brink of the Fall of Saigon in 1975. It was also the last US military operation in the Vietnam War. Seeing as there were no more hopes for the South Vietnam government, the US had planned for evacuation with the standard procedure prior to April. Civilians were being flown out of Saigon by fixed-wing aircraft from Tan Son Nhat airport in March without obstruction from the PAVN, probably to avoid further confrontation with the US. Then on April 28th, the Tan Son Nhat Air Base next to Tan Son Nhat Airport was struck by artillery and got damaged. The safer option of evacuating through fixed-wing aircraft was no longer viable. 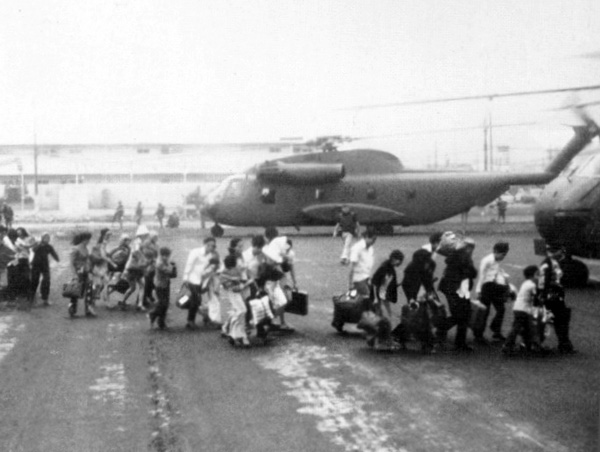 At 12:15 PM, Tuesday, April 29th, 1975, Operation Frequent Wind began. The signal for chosen passengers was this message on the Armed Forces Radio "The temperature in Saigon is 105 degrees and rising. This will be followed by the playing of I'm Dreaming of a White Christmas’’. There were 13 helicopter pickup points positioned around Saigon. At 3:12 PM, Tuesday, April 29th, the first flight took off from the DAO (Defense Attaché Office) carrying 149 evacuees. At 4 PM, 18 helicopters landed on 7 ships with around 956 evacuees. Surrounding the US Embassy in Saigon during this time was a wave of people, desperate to get a lift out. The helicopter sent to get ambassador Graham Martin at 1 PM, April 29th, called Lady Ace 09, instead was loaded with evacuees. It took 15 landings on the Embassy roof for the Ambassador to finally embarked on Lady Ace 09 at 4:58 AM April 30th. After 18 hours of nonstop flying to deliver evacuees to the stationed USS Blue Ridge, Lady Ace 09 accomplished its mission. 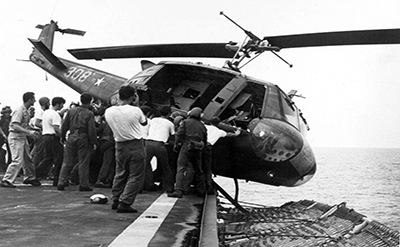 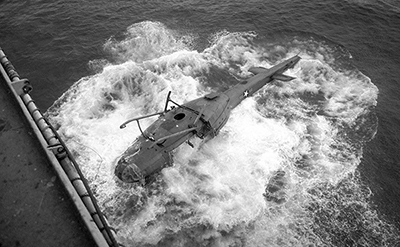 At the sea, more drama took place. Many South Vietnamese pilots flew their helicopters to various US ships. Some landed near the shore, some crashed into the sea then swam to the ships. Helicopters had to be pushed overboard to make room for more helicopters. There were also many more Vietnamese trying to swim to the US ships with makeshift rafts, boats, or sampans. At 7:53 AM, April 30th, 1975 the last helicopter took its wings, carrying Major Kean and 10 Marine Security Guards. This helicopter landed on USS Okinawa at 8:30 AM. And it was truly the last helicopter out of Saigon. At 8:54 AM, Operation Frequent Wind concluded. 1,373 Americans and 5,595 Vietnamese were evacuated by helicopters.

For more information about the Aftermath of the Vietnam War, check out our article here.

In many records, the rooftop where the evacuation took place was thought to be the old building of the US Embassy in South Vietnam at the time, but it was actually at Pittman Apartments where many CIA agents resided. In 2000, after much research and testimony, a group of reporters from the People magazine found the building located at 22 Ly Tu Trong Street, District 1.

To learn more about the Vietnam War, you can also pay a visit to the War Remnants Museum in Ho Chi Minh City. 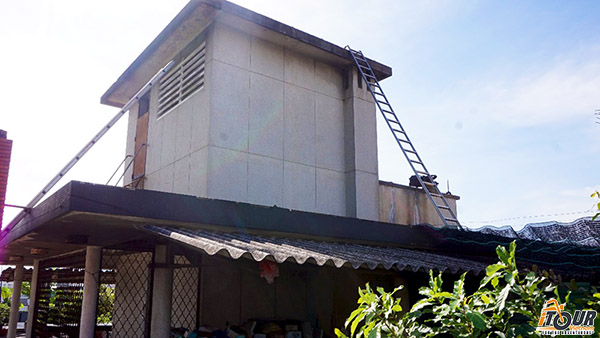 The rooftop at 22 Ly Tu Trong, District 1 at present

The Conclusion of Yesterday, the Beginning of Tomorrow

By now, the war has ended for 43 years. Time eventually erode everything and healed all pains. It is the present that we should treasure, tomorrow that we should look forward to. After all, a beautiful, multi-faceted city like Saigon does not let one single event defines her. People often say "only time will tell. And time has told us that Saigon did not fall, she rose up to become even more gorgeous. You have to come here to see for yourself the beauty of Saigon and Vietnam as a whole, the beauty that traversed through all pain and hardship. After the fall of Saigon, it was renamed Ho Chi Minh City, and is here and waiting for you to discover.

Capture a "piece of history" yourself by collecting these unique Vietnam War Memorabilia.

Saigon as of today

If it hadn't been for your guides, I would have missed out on a lot of incredible things in Vietnam. You are my go-to-guide every time I'm going to Vietnam

0 Cancel Reply
If it hadn't been for your guides, I would have missed out on a lot of incredible things in Vietnam. You are my go-to-guide every time I'm going to Vietnam
Cancel Update Comment

The helicopter building wasn't easy to get access to, but your guide showed me the tips if you want to see this, make sure sure you book with these guys

0 Cancel Reply
The helicopter building wasn't easy to get access to, but your guide showed me the tips ;) if you want to see this, make sure sure you book with these guys
Cancel Update Comment