This attraction is one of the hundreds of ancient houses from the French colonial period that have been preserved in Ho Chi Minh City (Saigon). Nowadays, the building is used as the Fine Arts Museum exhibiting many of the most famous artworks representing every Vietnamese historical stage. When visiting here, you will have the chance to admire the ancient stone statues from the 7th century and the most exciting art masterpieces.

About the Fine Arts Museum in Ho Chi Minh City

A Brief History and the Establishment

Many years ago, this construction belonged to a trade man who was very famous and rich in the South of Vietnam in the 20th century. His name was Hui Bon Hoa, a Vietnamese Chinese. He used to be a poor person, but he tried hard to earn money and became a great rich man. He also owned several other famous mansions in Saigon at that time.

The Fine Arts Museum was designed and constructed in 1929 by a French architect. After the North and South of Vietnam reunification event in 1975, all of his descendants moved to other countries to live, and most of his mansions were left uninhabited in Saigon. Then, the government took over this place and handed over to the Propaganda Team, and later Vietnamese Exhibition Center to manage in 1987 until now. Although the ancient mansion was officially reestablished as Fine Arts Museum in 1987, it was not until 1992 that the museum started opening for visitors because of the lack of art collections to exhibit. However, the Fine Arts Museum today is one of the best art exhibition centers in Vietnam, containing more than 20,000 works from many places. Every year, this museum attracts lots of visitors to come, half of them are foreign tourists.

Address of the Fine Arts Museum

Its total square is about 3,514 square meters. The museum’s design followed the architectural Asian - Europe school, especially the Chinese style and French style, which was constructed by the architect Rivera. The walls of the house were designed to be steady; its thickness is from 40 - 60 centimeters. 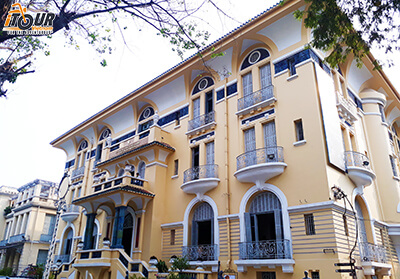 According to some historical documents, while the building was being designed, the architect was going to set 100 doors that included windows, backdoors and the main gate. But the General of Indochina did not agree to sign the design and force the owner to remove 1 door. Moreover, the owner did not allow to open the main gate because it was bigger than the gate of Norodom Palace ( Independence Palace nowadays). So there are just 99 doors in the mansion. 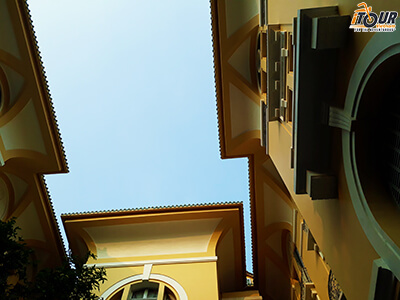 There are totally 4 levels in the building: 3 main floors and 1 basement. There are 4 blocks of the house were set up to create large air well in the middle of the mansion so that the interior is shone directly by the sun. This place is often used as the painting class for kids on weekends.

Inside of Fine Arts Museum in Ho Chi Minh City

The highlight of the whole structure of the museum was mainly on the first floor. The lobby is large with a high ceiling and covered with a big roof. There is a pair of porch stairs that were built symmetrically on the two sides of the main gate. On top of the arched main gate, there is a piece of iron inscribed with the initials “H.B.H” that stands for the name “Hui Bon Hoa” in a stylish font. Besides, on the column behind the museum, there is a plate engraved with names of the owners of this mansion, all of whom were members of the Hua Bon Hoa’s family. 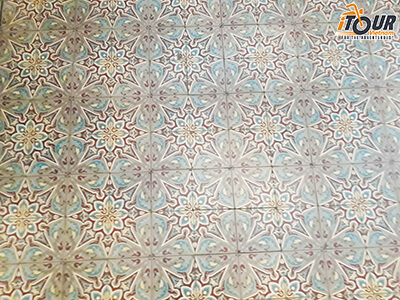 The entire floor of the museum is tiled by diverse pattern tiles, except for the stair which was built with jade stones. From the main gate, you can also immediately see the first elevator to be assembled in Saigon on the opposite of the room. Its cabin is made of wood, decorated and sculptured as an ancient palanquin. 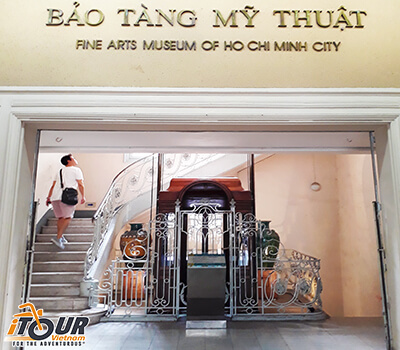 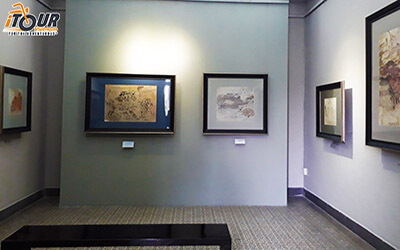 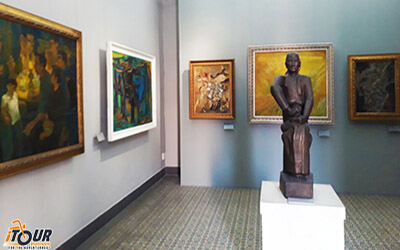 The first floor was exhibited with some arts of famous Vietnamese artists. Most of these pictures describing the culture and life in the countrysides, pagodas, and natural landscapes in the central coastal area of Vietnam. You would be most impressed by drawings of Vietnamese landscapes. 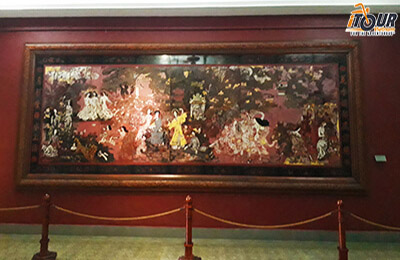 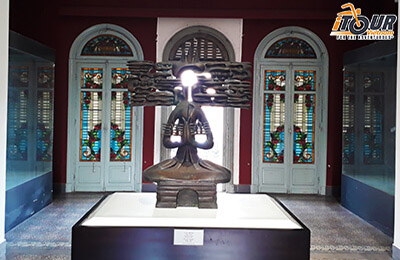 Moving up to the second floor, you will be introduced to the Vietnamese arts of some famous artists such as Trinh Cung, Do Quang Em, and Diep Minh Chau. Their pictures are modern arts and were inspired by the Vietnam War contexts. This floor's main themes are “Modern Arts” and “Arts after 1975”. 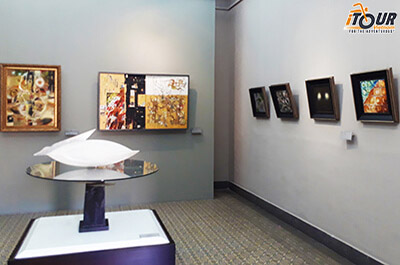 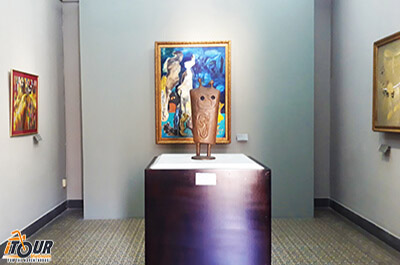 On the third floor of the museum, there are some valuable ancient statues and abstract pictures. Like the other floors, the space on this floor is divided into rooms of sculptures and pictures. One of the most interesting exhibits is the ancient statues of Buddha, iconic religious statues that were found in the Mekong Delta a long time ago. Those are the main attractions reflecting the theme of this floor which is “Traditional Fine Arts and Crafts".

Besides, you could visit the gallery room behind the museum and see some oil paintings; if you are interested in these pictures, you can book to buy them as well.

Outside of Fine Arts Museum in Ho Chi Minh City 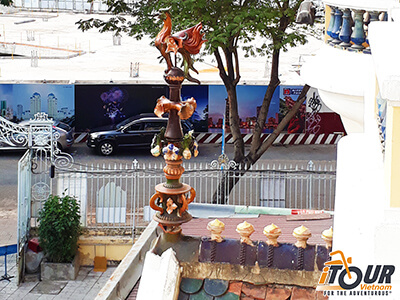 The ancient red-tiled roof was decorated with pretty green enamel slices on the edges. Besides, most of the windows in this building were installed with colorful glass panels and decorated with typical patterns that follow the European architectural style. 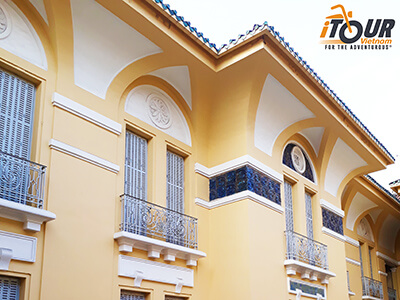 There is a small garden on the ground of the museum. After wandering around the museum, you can stop in this pretty garden and have some drinks to enjoy a little peaceful vibe, isolated from the surrounding hectic sounds of the city.

As one of Ho Chi Minh City's museums along with Museum of Vietnam History, nowadays, most of the art masterpieces that are highly valuable and attractive pictures and works are exhibited in this museum. Therefore, you should come here to see for yourself these valuable exhibits when you arrive in Ho Chi Minh City. Besides the Fine Arts Museum, there are other special historical attractions in Ho Chi Minh City such as the Saigon Central Post Office, Independence Palace, and Notre Dame Cathedral.