The Buddhist Crisis of 1963 The foundation of Buddhism philosophical system is centered around humans; Buddhism practitioners believe that mankind is the master of their own faith, and only they can free themselves through practices such as hard work, mindfulness training and being empathetic to others. Because of this, Buddhism is considered to be a practical, scientific, and democratic religion.

However, it can also be a major disadvantage due to the fact that other religions think of Buddhism as an atheist belief. Ngo Dinh Diem, the former President of the Republic of Vietnam before November 1963, issued a ban on the Buddhism flag outside of the religious practice places, because of his favor toward Catholicism. His decision sparked up a huge controversy among Buddhist followers in Vietnam, setting the wheel in motion for the Buddhist crisis of 1963 in Saigon.

Reacting to President Diem’s controversial legislation, thousands of Buddhists held a civil protest in 1963 on Phat Dan - the celebration of the Gautama Buddha birthday - in Hue. The protesters, led by Buddhist monk Thich Tri Quang, rallied outside of the government radio station while chanting anti-government's decision and calling for religious freedom. The tension increased as the crowd grew larger and larger; the government armed security officials surrounded the area to disperse the crowd. Then suddenly, there was the sound of bombs went off, the troop unleashed fire hoses and bullets to break the crowd. At least seven died in the aftermath, some of whom were even children - crushed by the panic crowd trying to escape.

Ngo Dinh Diem's administration denied throwing grenades at the nonviolent protesters and shifted the blame to the Viet Cong terrorists. However, there was no evidence to support this allegation as Viet Cong guerrillas didn’t have access to such powerful explosives at the time. Others speculated that the American government was the mastermind behind the tragic event, with the intention to overthrow Diem's regime.

On May 10th, 6,000 Buddhists marched to Tu Dam Pagoda to hold a mass funeral as well as demonstrating their anger, calling for religious equality. Thich Tri Quang asked the demonstrators to follow Gandhian principles and said to carry no weapons. 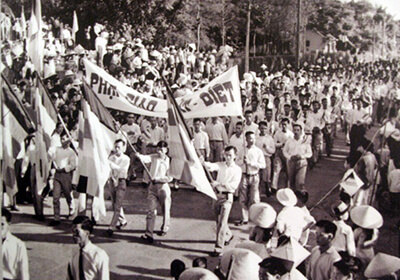 Buddhism practitioners and supporters protested the ban of the Buddhist flag

On June 3rd, Buddhist monks together with their supporters, some were even high school and university students, held another series of protests all over the country by praying on the streets. Despite Ngo Dinh Diem’s order to arrest those who participated in the protest in Hue, more than 1,500 people marched to Tu Dam Pagoda and rallied at Ben Ngu Bridge near the Perfume River. Failing to call off the protest after a three-hour standoff, the troop resorted to using tear gas grenade to forcefully dismiss the protesters. More than 60 Buddhists ended up in the hospital due to chemical injuries, over half of which suffered from second-degree burns. 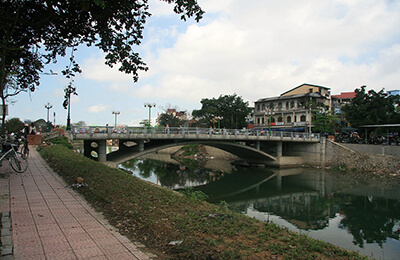 On June 11th, 1963 Buddhist monk Thich Quang Duc drove himself to the corner of Le Van Duyet and Phan Dinh Phung, a crowded crossroad of Saigon, and committed self-immolation to protest the Diem's regime oppression against Buddhism. Many monks and nuns soon followed his step; their heroic sacrifices shocked the entire nation and international communities. Everywhere around the world, people were outraged, the American government threatened to cut their aid to the South of Vietnam. Ngo Dinh Diem had no choice but to soften his tone and agree to a formal meeting with Buddhist leaders. A Joint Communique was signed in the middle of July, Ngo Dinh Diem's government promised to agree upon the 5 demands of the Buddhist leaders and bring an end to the Buddhist crisis. However, Ngo Dinh Diem's regime never intended to keep their end of the bargain, The Joint Communique was not implemented and Buddhists monks continued to be repressed.

A memorial statue of Thich Quang Duc was constructed in 2010 in the exact spot where he set himself ablaze, the infamous crossroad has been renamed to Nguyen Dinh Chieu and Cach Mang Thang Tam (District 3).

The blue, Austin Westminster vehicle, used to drive Thich Quang Duc to his noble sacrificial act, was first confiscated by the authority as part of the investigation. It was not until 1964 that Buddhist monks were able to regain possession of the historic car. It is currently being preserved and displayed at Thien Mu Pagoda in Hue together with other photographs and artifacts related to the event.

Thich Quang Duc’s body was cremated. His kind and undying charred heart remained intact after the immolation and cremation. It is stored at the State Bank of Vietnam building in Ho Chi Minh City for safekeeping, and transferred to Viet Nam Quoc Tu (Vietnam National Pagoda, District 10), along with documents of the Buddhist crisis in 1963, once the construction of the pagoda is finished. 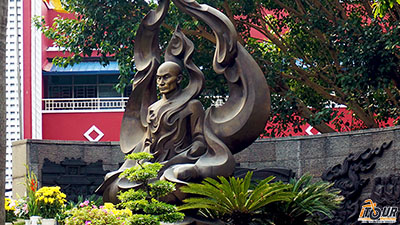 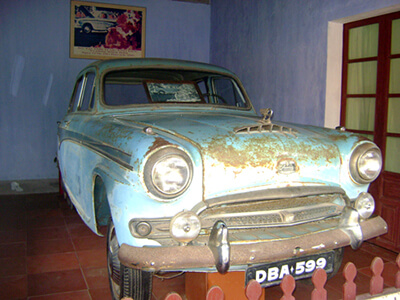 On August 18th, monks and nuns staged another mass protest at Xa Loi Pagoda, one of the biggest pagodas in Saigon, by going on a 48-hour hunger strike. The event attracted nearly 15,000 people, triple the number of supporters compared to previous rallies. Believing that the monks couldn’t possibly be capable of assembling such a huge crowd just by themselves, Diem came to the conclusion that the Communists were responsible for manipulating the Buddhists for their own political agenda.

With Diem’s approval to enforce martial law, on August 20th, 1963 Ngo Dinh Nhu ordered the armed force to attack popular pagodas in both Saigon and Hue, which were operation bases of the Buddhist monks. This was the climax of the Buddhist crisis of 1963, over 1,400 monks were arrested, the number of monks and nuns killed were estimated to be hundreds. 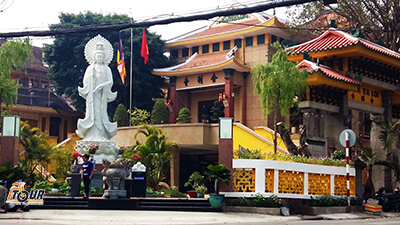 Outside of Xa Loi Pagoda today

After the series of events, international communities strongly condemned Ngo Dinh Diem's dictatorial regime, as a consequence, the U.S. completely cut their aids to the Special Forces and other government programs. Taking advantage of this one of a lifetime opportunity, knowing that the U.S. government would not intervene to Diem’s defense, the Army of the Republic of Vietnam led by General Duong Van Minh carried out a coup on the 1st of November. Ngo Dinh Diem and his brother Ngo Dinh Nhu were assassinated on the following day.

Conclusion on The Buddhist Crisis of 1963

The Buddhist movement of 1963 started out only as a fight against religious inequality but soon escalated to become a historic battle for love, peace, and liberation. The movement played a major role in the demise of Ngo Dinh Diem's regime.

I remember learning about this in our tour. Vietnam history is so fascinating and heartbroken at the same time

0 Cancel Reply
I remember learning about this in our tour. Vietnam history is so fascinating and heartbroken at the same time
Cancel Update Comment

This is such a heartbroken event