Beside some tourist attractions in Saigon as Notre Dame Cathedral, Independence Palace, Saigon Central Post Office, there are some local places where you should visit to explore and learn more about the lifestyle and history of Saigonese. Ancient temples in Saigon are the folk religious sites that we highly suggest you come to see and visit on your trip in Saigon. Among them, Thien Hau temple is one of the special local attractions in Cho Lon where you could discover more Vietnamese beliefs.

In the 1770s, Cho Lon (District 5, 6, 10, and 11 in Saigon) was a place where most Chinese ethnics moved to settle after they had escaped from the Vietnamese civil war in Cu Lao Pho. Comparing with Cu Lao Pho, this area had more business advantages and was convenient to trade goods with foreigners because there were many small canals and rivers leading to Saigon River. According to Chinese ancestors who had lived in Saigon for many years, the Chinese often built local markets, temples, and homes in the same area to support and run their business together in every new land. Therefore, over the years, this area has become famous for its Chinese cultures and traditions with Thien Hau Temple as an iconic Chinese temple from the early time of Cho Lon. 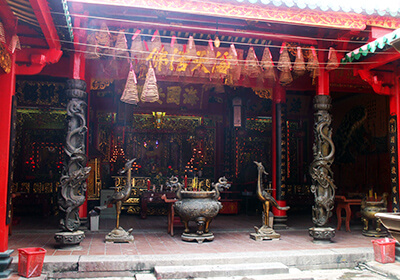 Thien Hau temple was built in 1760 by a group of Chinese immigrants from Guangzhou to Saigon - Cho Lon. In traditional Chinese beliefs, Lady Thien Hau is the one that gives a blessing to prosperity and health for fishermen, sailors, and people who travel on the sea. Therefore, the immigrants believed that they had been helped and supported by her on their journey moving to settle in a new country, Vietnam. The place has often been used as an assembly hall of the Chinese community in Chinatown to hold meetings for over 250 years. In 1998, the temple was recorded as a National Architectural Heritage Site attracting many foreign tourists every year. Until today, the temple is still one of the most visited Chinese temples in Saigon where people come to give offering and incense on monthly special occasions in the lunar calendar.

Address: 710 Nguyen Trai Street, District 5, Ho Chi Minh City (Saigon)
Opening hours: From Monday to Sunday, you can visit this place from 8:00 AM to 4:30 PM, and it costs you no money to go inside this temple.

A Myth of Lady Thien Hau

The main goddess that is worshiped in Thien Hau Temple was Mazu (Thien Hau Thanh Mau) from China. According to old folks, she practiced Confucianism and Buddhism and had magical abilities to help other people. One of the myths says her father and brothers were fishing in the sea when they faced a typhoon. She fell into a sleeping state to save them in her dream when she was at home with her mother. Unfortunately, she was not able to rescue her father because her mother unintentionally woke her up. From then, people started worshiping her for their safety on the sea; Chinese fishermen always thought that she could appear and help them when they get trouble when fishing in bad weather. 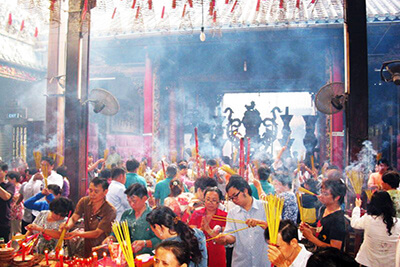 The main event of Thien Hau Temple is Lady Thien Hau’s birthday on March 23rd of the lunar calendar. Annually, Thien Hau Temple (District 5, Saigon) along with all temples worshiping Thien Hau across the country celebrate her birthday with rituals and performances like “Ruoc Ba” (welcoming Lady Thien Hau) and the lion and dragon dances. The statue of Mazu will be put on a colorful palanquin carried by young people parading around the neighborhood. Worshipers follow her palanquin while holding the wooden plates which have names of other gods in the temple. Many locals would visit the temple to pay offerings and pray for themselves.

Besides, the Thien Hau Temple often welcomes a huge amount of believers who come there to visit and pray every day. On traditional festivals such as the first and fifteenth day of lunar months or Chinese Tet, not only the people in Cho Lon but also many people from other districts would come to donate and pray for their family, health, and work. 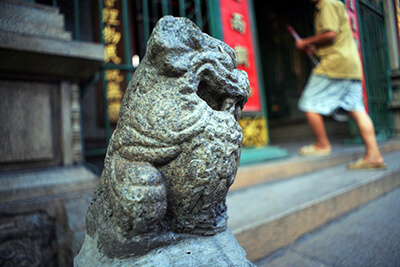 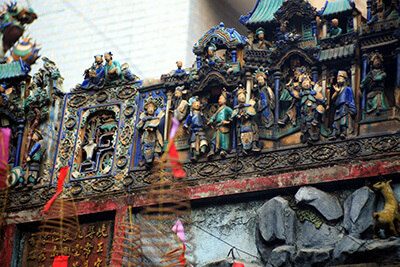 You will easily recognize some Chinese patterns on the walls and the roof of the temple from the outside like porcelain dioramas representing daily life in a Chinese city in the past. This temple was built completely based on Chinese temple architecture with three main halls: the front, the center, and the back. Between each hall, there is an opening space where the sunbeam reaches every corner of the temple. There are floral patterns, Chinese couplets, pictures of nature, statues of Four Holy Beasts (Dragon, Qilin, Turtle, and Phoenix) sculpted and hung in every hall. 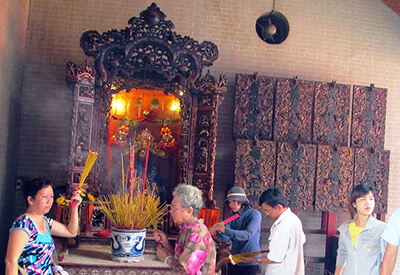 When coming through the front hall, you will see two altars on the left and the right where people worship two deities, a door god and a locality guardian. Besides these god sculptures, there are stone steles depicting the life of Mazu and other big pictures of her in goddess form. 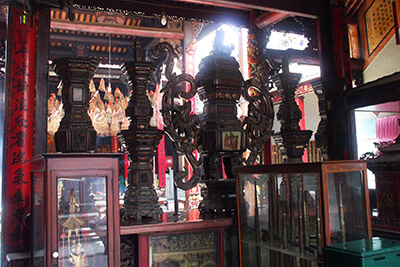 In the center hall, a huge bronze censer made in 1886 that was transported from China is put in the middle. On the left and the right of the censer, there are an old palanquin and a dragon boat that was gold plated, a symbol of peace and safety to fishermen; these two exhibitions are carefully protected in glass frames. 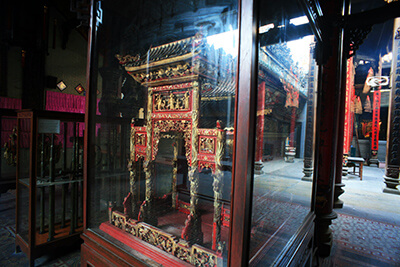 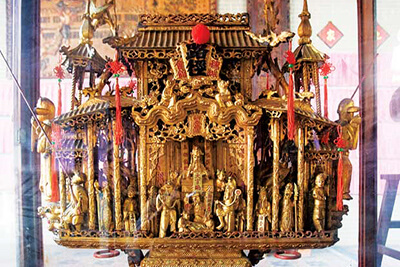 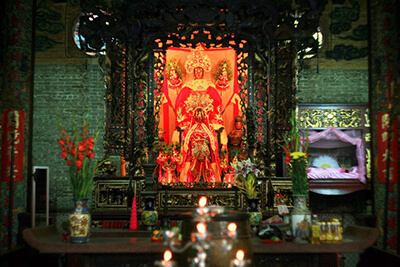 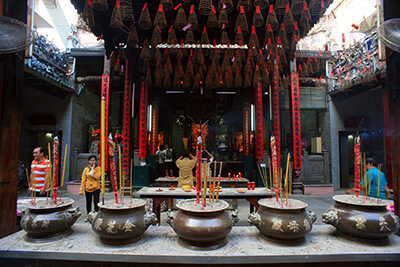 The place of worship and putting the Mazu statue is in the back hall. In this area, there are also two other statues of aquatic goddesses, Lady Kim Hoa and Lady Long Mau, along with the main altar, so that it would be convenient for the visitors and worshipers to pray and to offer incense. Some other Chinese deities that are worshipped in this area are the God of Wealth and God of Earth. 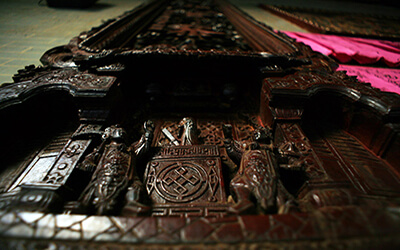 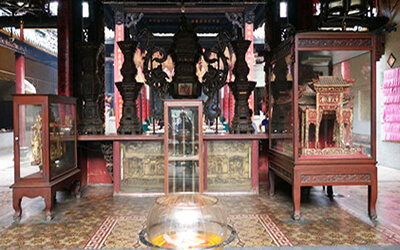 All of the ceramic materials used to construct the temple were originally from China. Besides, there is a large number of sophisticatedly made antiquities that were from 18th to 20th centuries such as valuable wooden sculptures, old stone stele, and bronze incenser. These antiques have been well preserved until now, especially, the two big ancient bronze bells; one of which was made in 1796 and the other in 1830.

Thien Hau Temple is one of the ancient Chinese temples in Saigon. Not only does the temple has a lot of valuable arts and old antiquities, but it also is a famous site for the visitors and locals to practice and understand Vietnamese folk religions.

Check out our Day Adventure and Saigon’s Other Side tours to explore Thien Hau Temple and other religious attractions on your Saigon trip.

a very lovely spot on the tour