The War Remnants Museum is one of the most famous historical attractions in Saigon. Coming to the War Remnants Museum, you can learn a part of how Vietnamese had struggled and fought for their independence, freedom, and peace of the nation and the locals' perspectives of the Vietnam War. The exhibits, such as weapons, documents, and photographs, display in War Remnants Museum are firm evidence of war crimes in Vietnam and speak for the heroic actions of the former Vietnamese generation.

How to Get to War Remnants Museum

The museum is in the corner of Vo Van Tan Street and Le Quy Don Street, near the city center and other Saigon attractions. It is a 5-minute walk from the Independence Palace and takes about 10 minutes from Notre Dame Cathedral or the Saigon Central Post Office.

7:30 AM - 6 PM Daily
The museum opens 365 days/year, including Vietnamese holidays 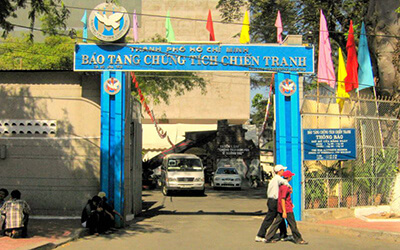 War Remnants Museum is on the list of Saigon's oldest museums. It was first opened to the public in 1975. At that time, the War Remnants Museum was known as the "Exhibition House for the United States and Puppet Crimes". It was established to expose the raw and cruel truth about the Vietnam War and criticized the US and Republic of Vietnam Army for their war crimes. Afterward, the museum went through changes and renovated a few times during the normalization of relations between Vietnam and the US. As a result, its name was changed to the War Remnants Museum in 1993.

The War Remnants Museum has outdoor exhibitions and three floors inside the building with galleries of permanent and temporary exhibitions on each floor.

The display exposes a part of the cruel truth about the Vietnam War and many of its painful and lasting consequences. Some materials may be disturbing and offensive, so you should consider when bringing your kids to visit. 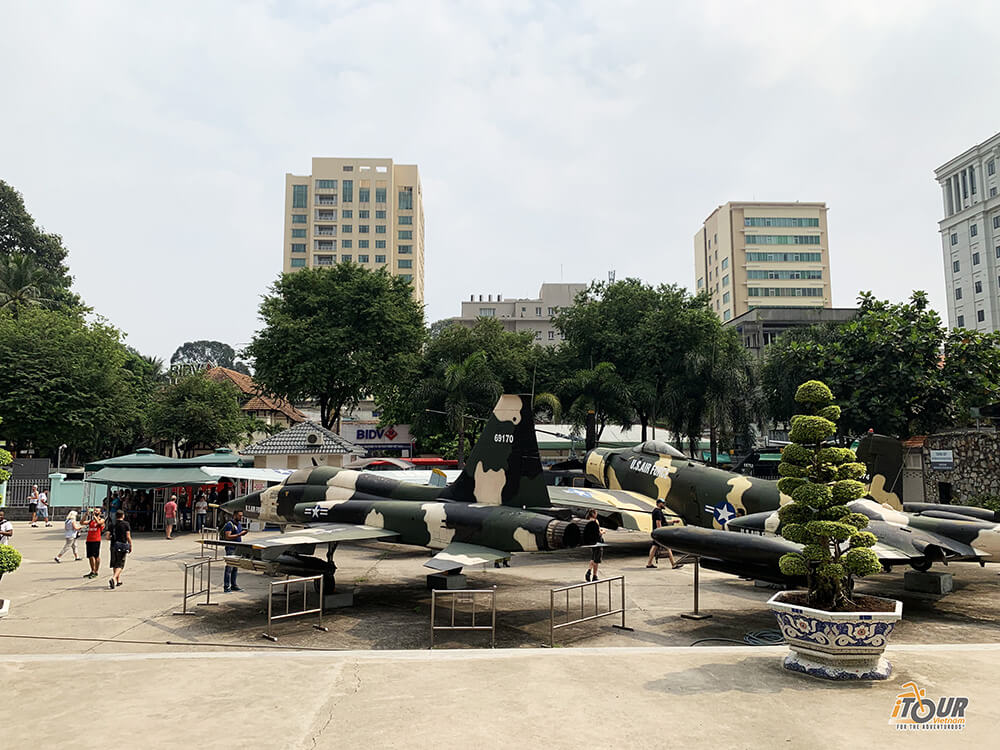 When coming through the front gate of the War Remnants Museum, you will see many large weapons used by the US Army, like heavy helicopters and airplanes of the US Air Force and armored tanks displayed in the yard. Besides, there are multiple kinds of weapons like rockets, bombs, and mines that were all active and have had their detonators removed before being exhibited here. 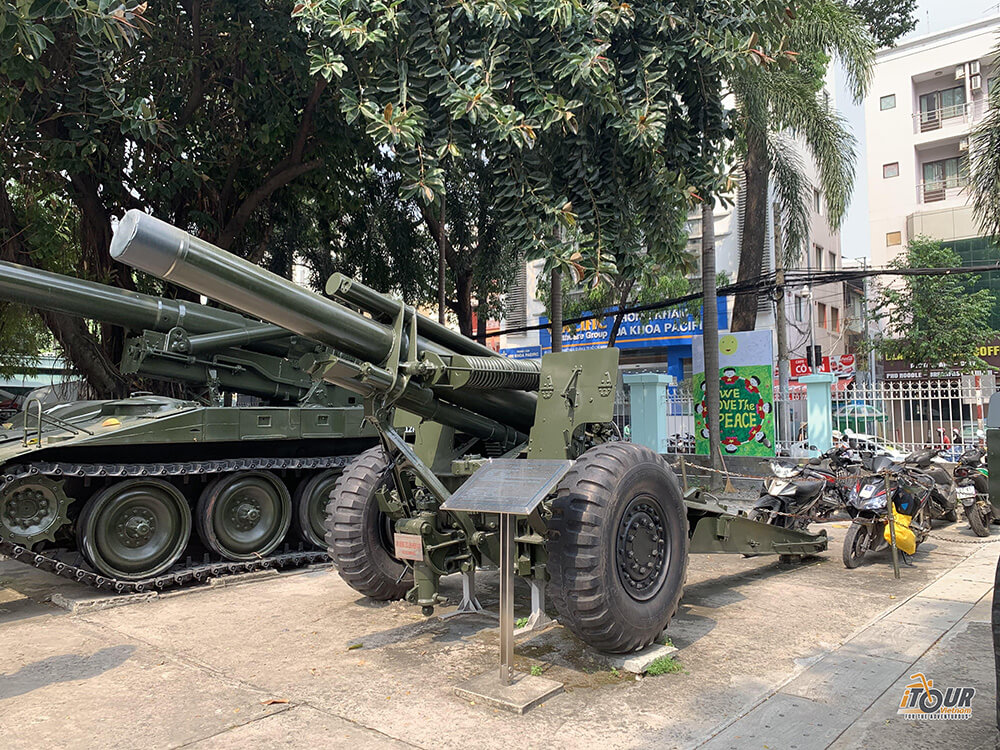 In the backside, you will find a small entrance leading to the Tiger Cages, a replicate of the real Tiger Cages used in the Con Dao Island prison. Tiger Cages were barbed wire cages used as a form of torture, where the Government of South Vietnam secretly kept and tortured their political prisoners in Con Dao. This area only showcases a small part of the original exhibit with a tiger cage on gravels, statues of malnourished prisoners inside two dark cells, torturing tools, a guillotine of the French, and various black and white photographs of that time. This exhibit never fails to give a confrontational glimpse of such sinister acts and war crimes against humanity. 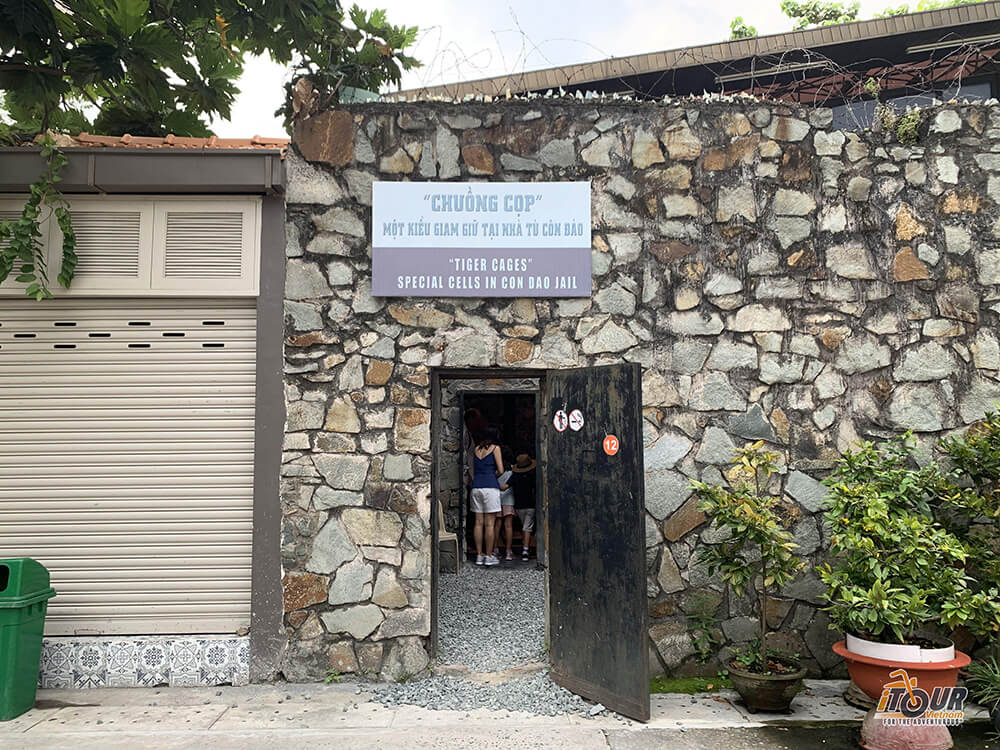 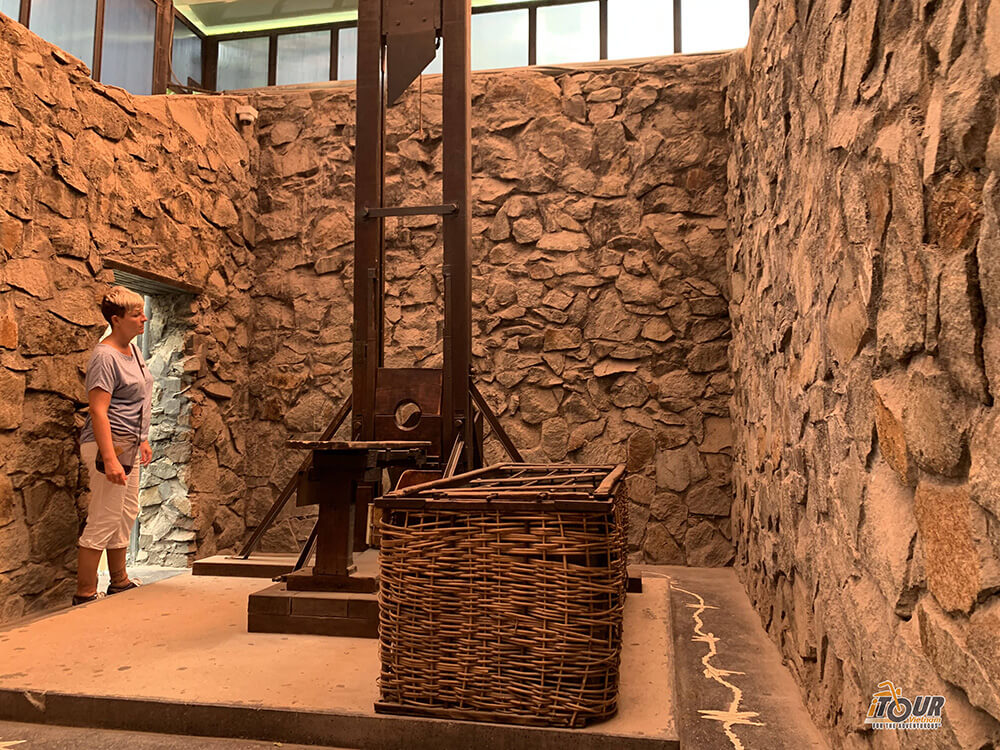 If you come to the museum through the front door, you will immediately notice on your left, an area dedicated to Agent Orange infected victims, called Victims of Agent Orange Overcome Difficulties. They make, sell their handcraft like keychains, lamps, and sculptures, and sometimes perform musical instruments here. It is a place where you can see the constant pain of the Vietnam War, but it is also a place where you can make small gestures to help these people have a better future. 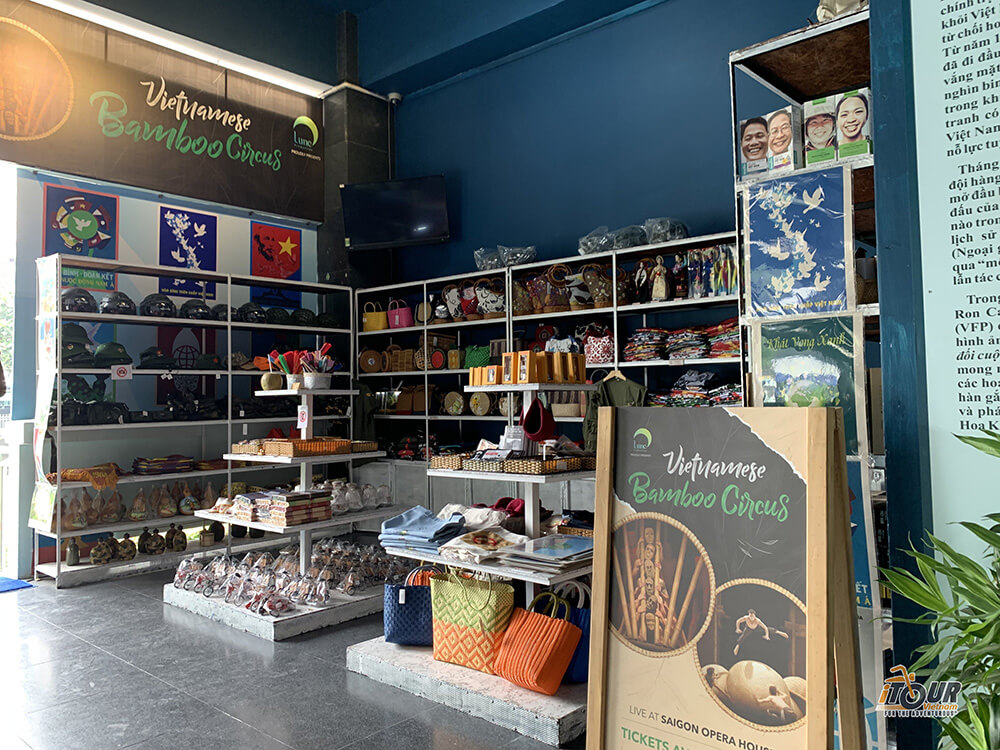 Behind this, there is an area holding temporary exhibitions related to Vietnamese history and Vietnamese culture. The topic will change every once in a while, mostly covering stories during the Vietnam War 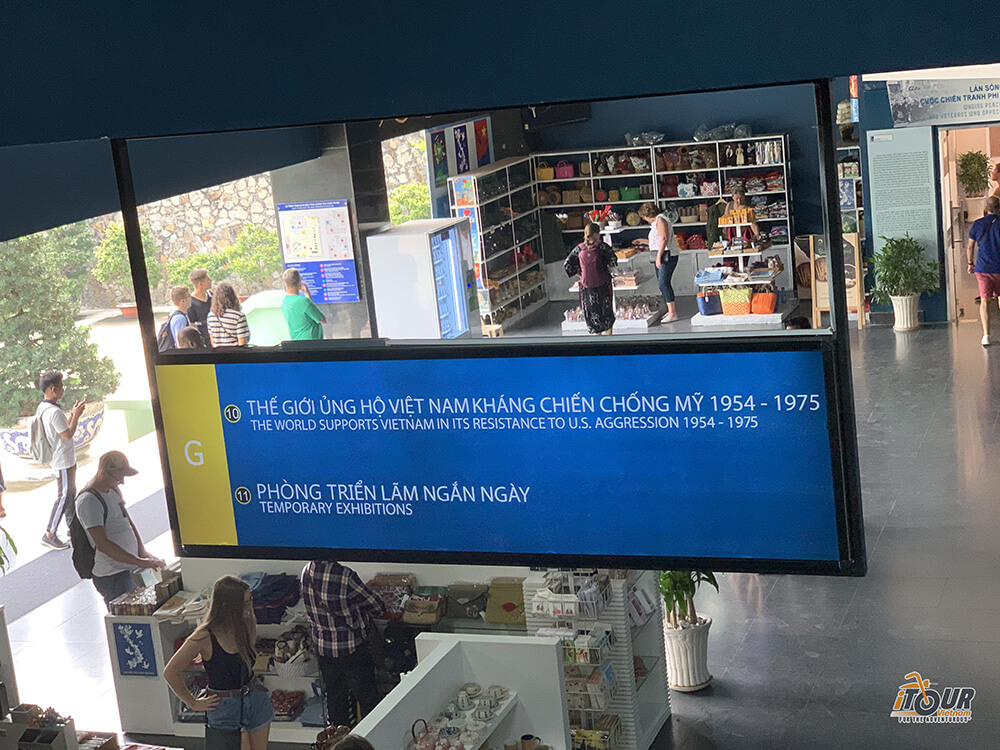 Instructions on the ground floor

Across the room, next to the staircase, you will find a permanent exhibition topic, named ‘The World Supports Vietnam in its Resistance". There are 100 pictures and 145 artifacts that show how people all over the world support the Vietnamese in their resistance against the US Army and protest against the Vietnam War. The museum also exhibits some remnants that American soldiers presented to the museum to show their regret of having taking part in this unjust war in Vietnam. While some people said that the theme of the museum is subjective and one-sided from Vietnamese standpoints, this topic displays and emphasizes the attitudes and points of view of people from all over the world at that time. 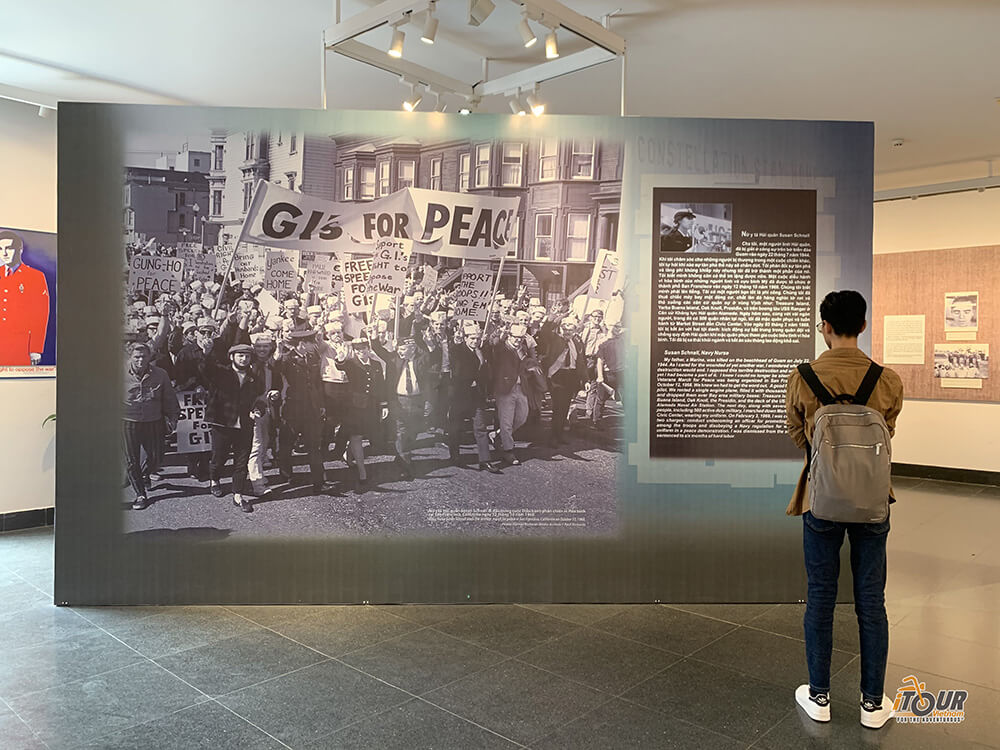 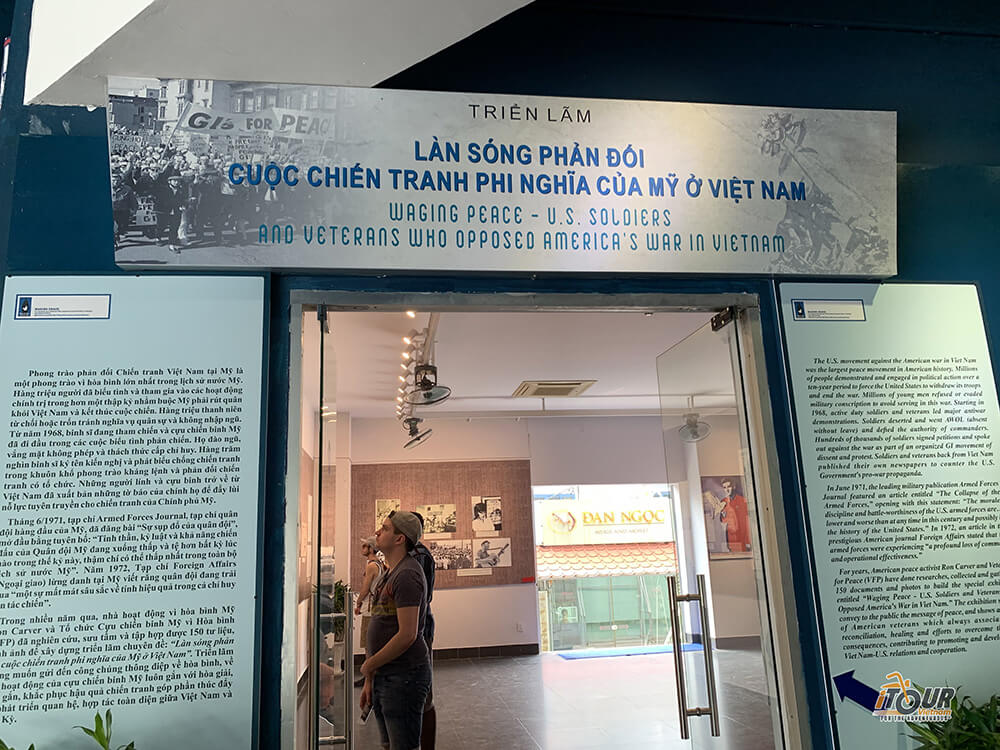 There are two galleries on this floor, the "Agent Orange Aftermath in the US Aggressive War in Vietnam" collection and the "Aggression War Crimes".

In the first room, you will see the destruction of the toxic chemical brought to the land and the people in Vietnam. During the Vietnam War, especially the ten years from 1961 to 1971, the US Army sprayed more than 100 million liters of chemical poison that contained 386 kilograms of Dioxin. As a result, almost Vietnam’s lands were poisoned; nearly 4.8 million Vietnamese people and their next generations were affected directly and endangered by severe disability. Eventually, the effects of chemical poison still exist today. 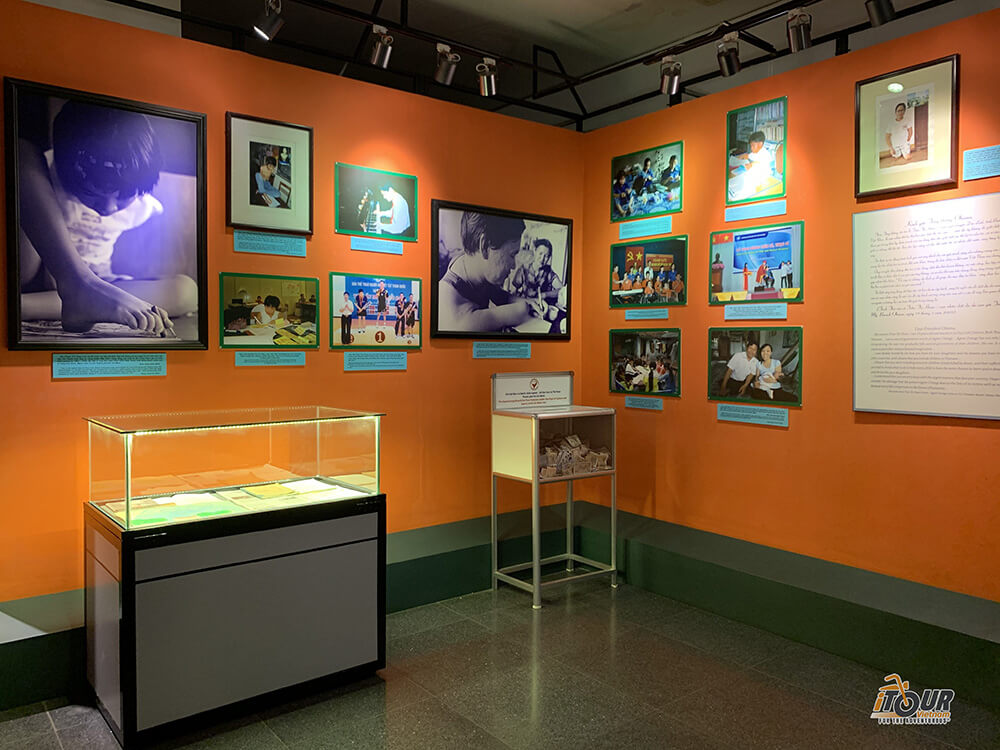 Besides the pictures, there is a heart-wrenching exhibit that could be quite disturbing and haunts you for a long while, the Thorxo Abdermine Pagus. The display here is the firm evidence of the war crimes against the elderly, the adults, the children, and unborn babies alike.

On the other side, the "Aggression War Crimes" gallery includes 125 pictures, 22 materials, and 243 remnants that show the crime of war and its extreme effects on Vietnam and the Vietnamese. The war ended up with an estimated number of 3 million people dead, 2 million people injured, 200 thousand people went missing, severe facilities damages on the whole country. 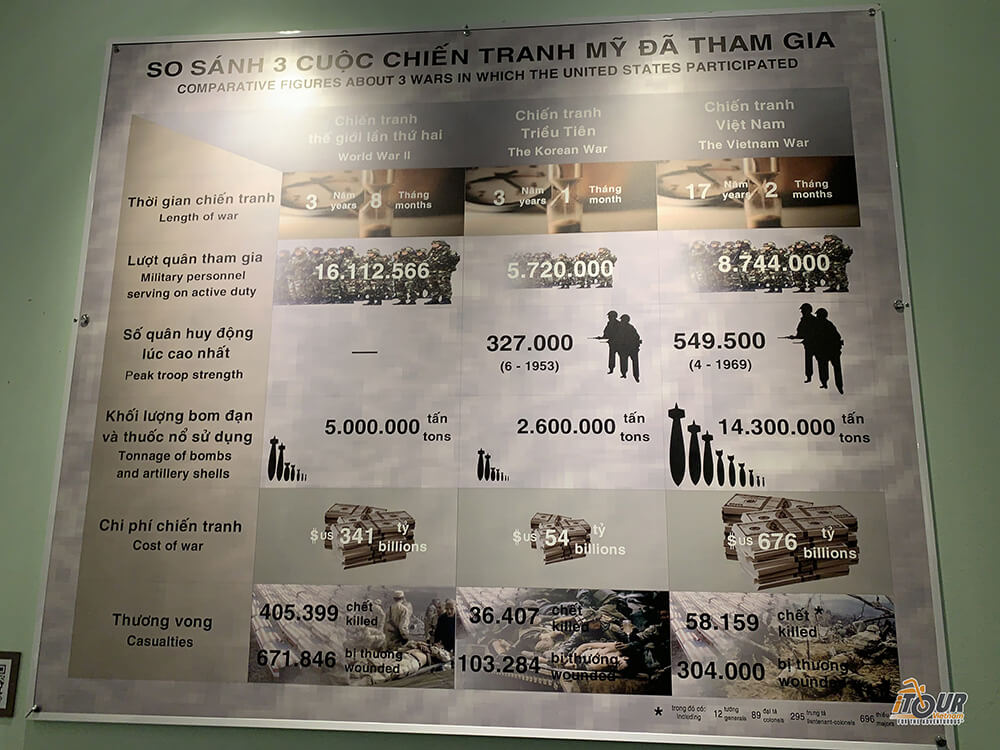 Progression of the Vietnam Wars with numbers 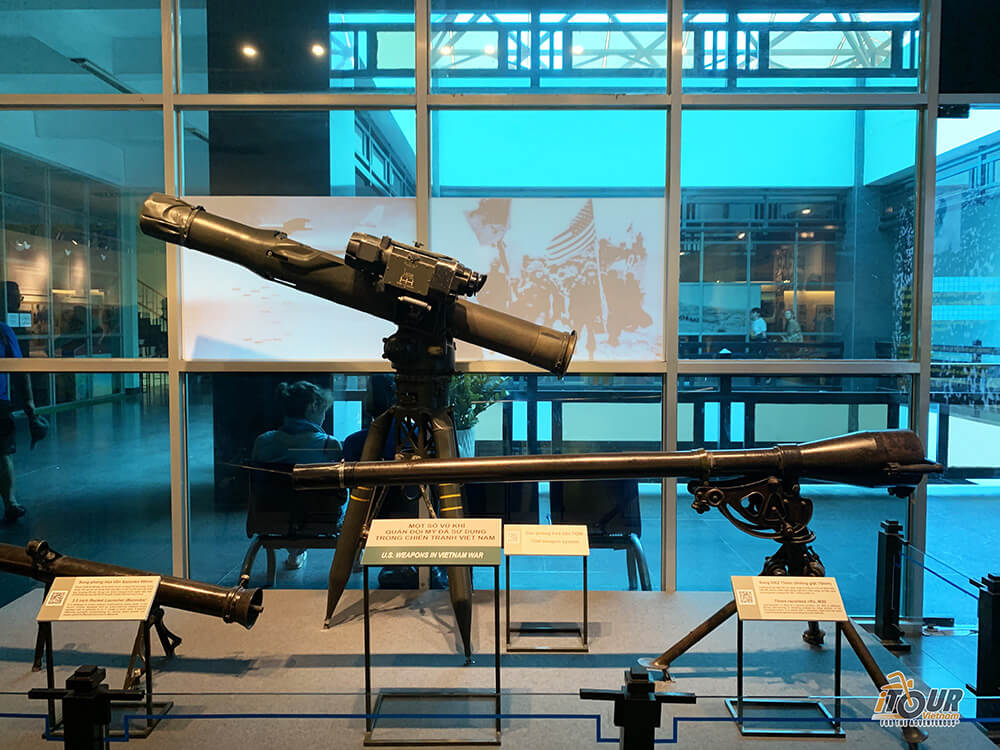 On the highest floor, visitors will have an overall look at the Vietnam War in galleries like "Vietnam War And Peace" and "Historic Truths". The pictures like the forest destroyed by chemical poison, the weapons, and many other remnants here could shock and move many to tears as they could not imagine such devastating consequences even though they have heard about the Vietnam War before. 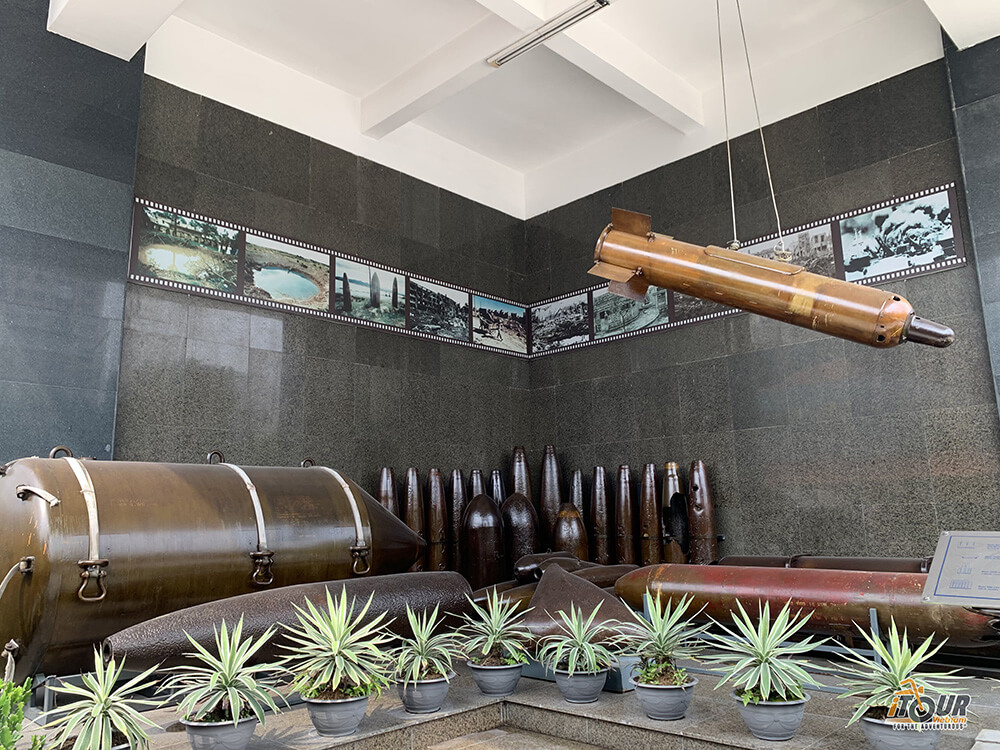 War Remnants Museum is the place to learn about the atrocities of war and war crimes during the Vietnam War and the place to honor people who sacrificed for the freedom of Vietnam and enlightenment of the truth. It is also a reminder of the invaluable peace many have exchanged their lives to earn and protect.

If you wish to understand more about the Vietnam War time, there are other historical attractions you can visit such as the Cu Chi Tunnels and the Independence Palace. You would not only see many remains but also get a chance to experience the living conditions of the people who fought in the war.

very confronting images but worthy of a visit when in saigon. would recommend.

0 Cancel Reply
very confronting images but worthy of a visit when in saigon. would recommend.
Cancel Update Comment

An interesting spot to visit on the tour. Will go again next time