The Saigon Central Post Office is one the most beautiful French architectures of Saigon, built in the Indochina time. The Saigon Central Post Office has been a witness to the changes of Saigon for over 120 years and has become a valuable masterpiece in the center of Saigon. It is not only famous for its gorgeous beauty, but it also serves as the oldest functional government working structure serving many customers every day. French architect Villedieu and his assistant Foulhoux designed this post office, but other sources are claiming that it was the work of Gustave Eiffel who was famous for the iconic French symbol, the Eiffel Tower. The truth is that it was Gustave Eiffel who had designed the first version of the Central Post Office, then, in 1886, the construction was rebuilt by Villedieu.

As soon as the French took control of the South of Vietnam, Saigon in particular, they established a telegraph system. On January 13th, 1863, the building was first opened to service for the locals, and the post office issued their first stamp. In 1864, the Saigon Central Post Office began to gain popularity in the Southern areas. From 1886 to 1891, the building was modernized by architect Villedieu, and that is the look of the Saigon Post Office we see today.

How to Get to the Saigon Central Post Office

This Saigon attraction now locates at 2 Cong Xa Paris Street, District 1, Ho Chi Minh City. It is near the Notre Dame Cathedral and the Independence Palace, so you can easily visit these French colonial architectures in a day. If your hotel or hostel is in District 1, it will be a 20-minute walk to the place. Or, you can hail a taxi or bike to get there.

You can come to wander around the site or use the postal services every day because it opens seven days a week.

Although the building was constructed a long time ago, the sculptures of the Post Office has been preserved as how it had been completed. The structure of the building was influenced by Western and Asian building style. What may catch your attention when coming through the main entrance is a giant clock hanging above the gate along with the years of construction from “1886 - 1891” sculpted below it. Other details are arranged symmetrically on the two sides of this center. 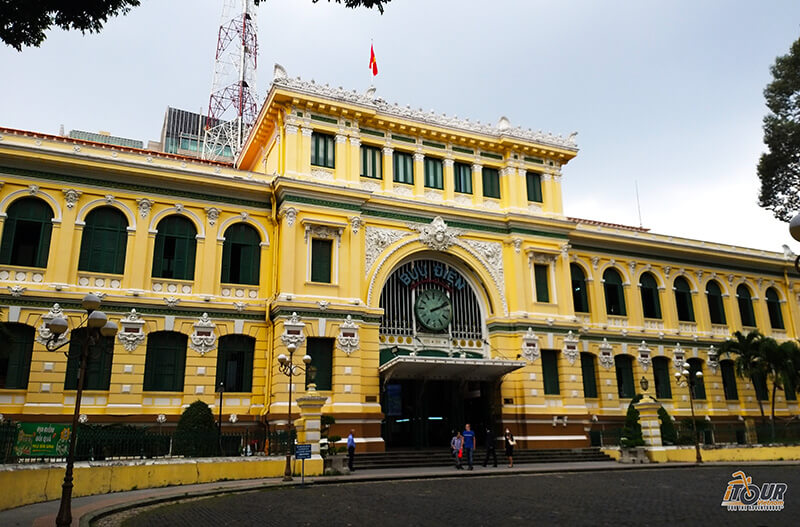 Between the old green windows, there are names of famous French inventors who devoted to the telegram and electricity sculpted on each post of the building. Some other names are Benjamin Franklin - one of the Founding Fathers of the United States, Alessandro Volta - an Italian inventor, and Michael Faraday - an English physicist. At first, the French decorated the whole building in light pink to match the red brick of the Notre Dame Cathedral, a nearby Saigon attraction. 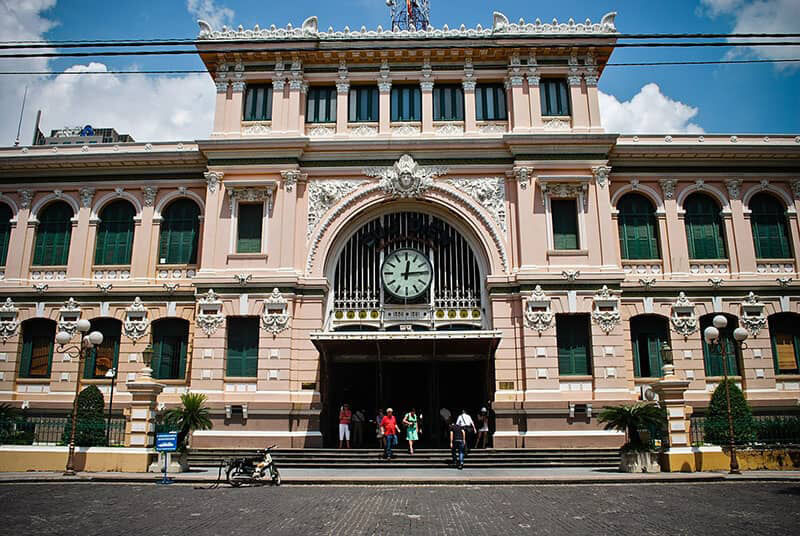 In January 2015, the City Council decided to change the original color of the Central Post Office in darker yellow. However, after the front was painted, most of the locals in Saigon criticized the new tone because they found it too bright.

In the end, after several meetings, the City Council decided to repaint the historical building with lighter yellow. When you step into the building, you can see the dome roof covering the whole length of the Post Office. The iron pillars in four corners are propping up the front dome, and the halls' domes are supported by rows of iron pillars on their two sides. At the crossing points of the posts, there are meticulous patterns designed by experienced sculptors. On the wall at the end of the central hall, there is a significant portrait of Ho Chi Minh, which you will usually see in many government buildings. Above the international telephone booths near the entrance, there are two maps; one shows the telecom system of Cambodia and Vietnam in 1936, and the other describes Saigon and its surrounding areas in 1892. 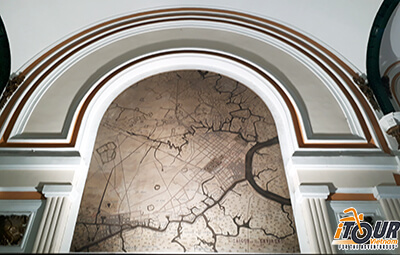 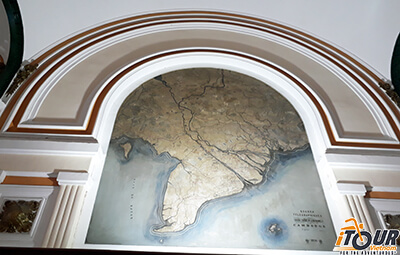 On the left and right wings of the building, two small staircases lead to the souvenir shops along these halls. 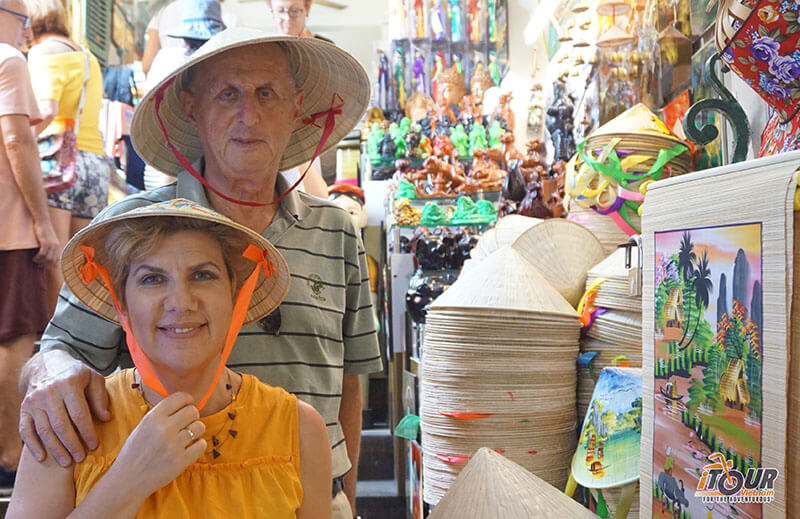 You can also buy some postcards printed with iconic buildings, such as the Ben Thanh Market, Notre Dame Cathedral, Independence Palace, or other sights of Saigon from the gift shop in the center, and send them home using the mailing service at the post office. You can also get your currency exchanged in this area. 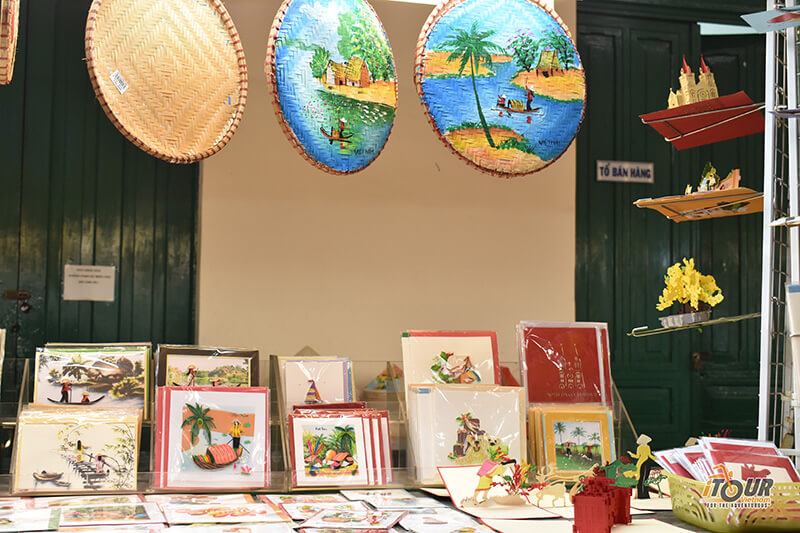 Behind the souvenir counter in the central hall, there are four long wooden tables where visitors can write their letters. The Central Post Office offers telegrams and parcels mailing service. Every day, there is a great number of Vietnamese and foreign visitors coming here to use its services. There are some guide signs written in English to explain the services to foreign customers. The Public Letter Writer in the Saigon Central Post Office When coming to the post office, you may notice an elder gentleman born in 1930 sitting at one of the writing tables in the central hall named Duong Van Ngo. He is a translator and has been working as a public letter writer since he was 18. Although he has retired from his job at the Central Post Office, he often visits the attraction and helps the people write letters in English and French. He also loves to tell the tourists the history of the Central Post Office and suggests to them other Saigon attractions to visit. Opposite the Saigon Central Post Office lies Notre Dame Cathedral, another one of Saigon's famous attractions. And in front of the church, there is a small garden with a statue of Our Lady of Peace. To the left of the Central Post Office, next to McDonald's, is Nguyen Van Binh Book Street which is opened for pedestrians to come and buy or donate books to the public. Besides shopping for books, you can enjoy Vietnamese coffee in some coffee shops along the right side of the book street. 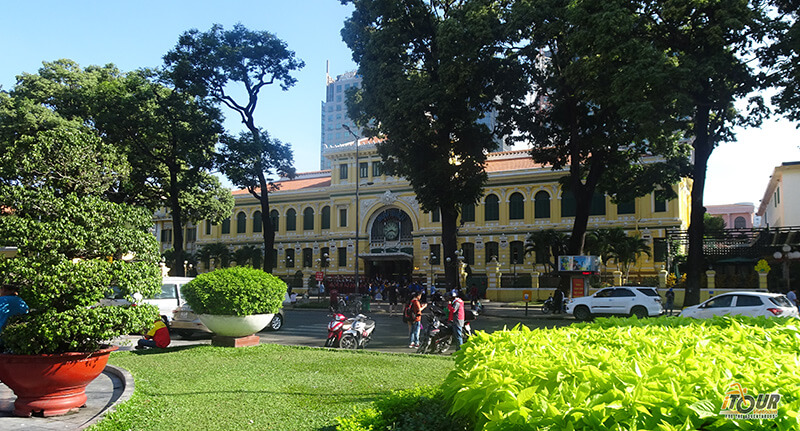 The contrast between old architecture like Saigon Central Post Office and modern edifices in its surrounding shows an interesting aspect of Saigon. The Post Office still stands through many historical events and plays an important role in Saigon's history as well as tourism.

If you are interested in the French colonial architecture in Saigon, join our Saigon Motorbike Tour to learn more about the Saigon Central Post Office, as well as other landmarks in the city.

Outrageous Things to do in Ho Chi Minh City

I saw a lady had her camera snatched right in front of this building! Be careful and don't flash your bags in the touristy area!

0 Cancel Reply
I saw a lady had her camera snatched right in front of this building! Be careful and don't flash your bags in the touristy area!
Cancel Update Comment