Most travelers and even locals just know about the infamous Cu Chi Tunnels as one of the military bases in Saigon (Ho Chi Minh City) that the Vietnamese soldiers used to fight against their enemies in the Vietnam War. However, there is another secret tunnels system that has only been mentioned by a few travel guide, even though the location of the tunnels is closer to the center of Ho Chi Minh City than that of the Cu Chi Tunnels. This lesser-known attraction is Phu Tho Hoa Tunnels, located in Tan Phu District. The tunnels had been excavated and finished before the soldiers were going to construct the tunnels system in Cu Chi.

How to Get to the Phu Tho Hoa Tunnels

The distance between the center of Ho Chi Minh City to Phu Tho Hoa Tunnels is about 10 kilometers, a 45-minute to 1-hour drive, if you travel there by taxi, bus or motorbike.

From the bus station at 23/9 Park (pronounced 23rd September Park) in District 1, you can catch bus number 149 to get to Tan Phu District and walk to the historical monument. The bus fare is VND 6,000.

You can also catch a taxi or Grab to get there. It would cost you about VND 150,000 on average.

This kind of vehicle is a common choice on the streets in Ho Chi Minh City; it would be cheaper than a taxi, faster than the bus, and allow you to explore a lot of places on the way. You can use a motorbike taxi or Grab. The cost is about VND 40,000 or more if you get there from the city center.

A Brief History of the Phu Tho Hoa Tunnels

In 1947, in Phu Tho Hoa Ward, the official resistance committee started a plan to dig a secret tunnel in the area and managed to finish it by the end of the year. To encourage and support the Vietnamese army, the locals also excavated other tunnels below their house to conceal the Vietnamese soldiers.

This place was chosen to build the secret tunnels because of its complicated terrain and the high land level. Besides, many bamboos and trees surrounded the place, which made it difficult for the enemies to look for the revolutionary base. In the 1950s, Vietnamese commandoes used this tunnels system as their hidden base and made several surprise attacks on the French in Tan Son Nhat Airport and their bomb storages, which caused panics to the French army.

The historical stages of Phu Tho Hoa Tunnels

In 1966, the existence of the revolutionary base in Phu Tho Hoa was revealed by national traitors, who ratted out the location to the French. The French army made an attack on the area, destroyed some parts of the tunnels, came back to surround the area in the next months, and later discovered the underground system. Many soldiers were captivated and tortured during this time, some of them were even sent to Con Dao Prison, but they still kept the secret of the tunnels.

The Tunnels System at Phu Tho Hoa

There are two levels and 4-meter deep in the ground. The height of tunnels is only about 1 meter, and the width is about 0.8 meters. There are some bulkheads and corners leading to other wards, but only Vietnamese soldiers could remember the ways to move in the tunnels. This was a smart plan to prevent the enemies from exploring the underground system. If they found one tunnel, the Vietnamese soldiers would crawl in others tunnels and camouflaged the entrance carefully.

The doors of tunnels made of wood were covered with soil and leaves in clumps and secret places, while the ventilation holes mound were constructed near to the bamboos. 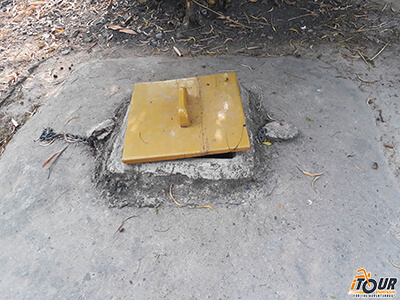 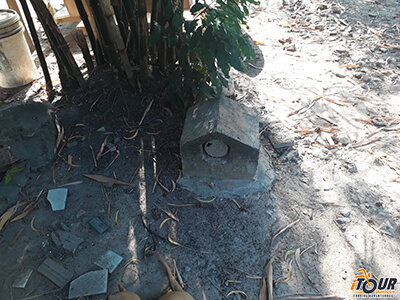 The entrance door and ventilation hole of Phu Tho Hoa Tunnels

The space of each tunnel is enough for 5 to 7 people to hide inside. There was a total of three underground rooms, and one of which was used as a meeting room. The total length of tunnels was about 10 kilometers. However, not all tunnels could be well-preserved. They can collapse easily, so there is only one 30-meter long for the visitors to see today.

The model of Phu Tho Hoa Tunnels

On the surface, there are fighting bunkers and L-shaped trenches around the tunnels, connecting the three resistance wards Phu Tho Hoa, Binh Hung Hoa, and Tan Son Nhi. The difference between Phu Tho Hoa Tunnels and Cu Chi Tunnels is that Phu Tho Hoa was built under local houses in a residential area near army bases. It was only used to make sudden attacks instead of being an extensive underground military base for commissioners like Cu Chi Tunnels.

Nowadays, this historical monument has changed a lot since Independence Day. More and more people have been moving to Tan Phu District to settle so that the tunnels area is decreasing. Moreover, there is not enough investment in preserving the tunnels, so not many guests, even the locals, visit here on a regular basis.

And although this place was an important remark in the revolution with many soldiers who sacrificed their lives, there hasn't been any memorial tombstone for these soldiers. It is also difficult for tourists to explore the tunnels because there is no light inside; to crawl through the tunnels, you have to use a flashlight.

The yard in the monument

The exhibition room in the historical monument

In the colonial periods, Phu Tho Hoa tunnels played a vital role in several victories of the Vietnamese army in the southern area. When the US army took over Saigon, the tunnels were also an important military base for the soldiers to assail enemy posts in the center of the city.

The tunnels' entrance at Phu Tho Hoa

Some clothes, tools, and pictures of Vietnamese soldiers who lived and fought in Phu Tho Hoa tunnels are displayed inside the exhibition room.

Vietnamese soldiers who dug the Phu Tho Hoa Tunnels 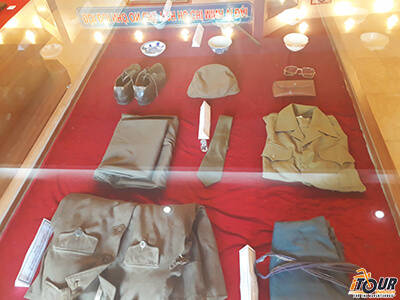 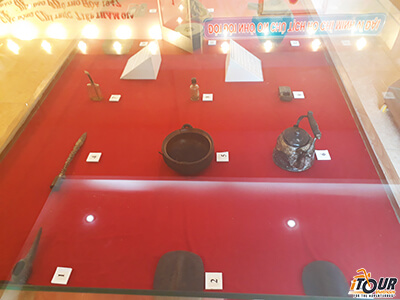 Clothes and tools used during wartime

Phu Tho Hoa Tunnels used to be a special military base in wartime. It became a national historical monument in 1996. However, most sources of information about these tunnels like documents, pictures, and the people who actually dug the tunnels have all been lost. Therefore, there are little information and exhibition displayed at this monument. However, the management department of Phu Tho Hoa Tunnels is still putting efforts in research and rebuild the tunnels system so that this place could become another historical tourist attraction in the city.

I have a YouTube channel and would like to film the site. Who would I get in touch with
to make arrangements to bring some camera gear and film?

0 Cancel Reply
I have a YouTube channel and would like to film the site. Who would I get in touch with to make arrangements to bring some camera gear and film?
Cancel Update Comment
First Page Previous Page 1 Next Page Last Page