About 50km from the center of Hanoi, the famous ancient villages on the outskirts of Hanoi are beautiful choices for tourists who wish to enjoy the unique Vietnamese ancient village atmosphere, which is impossible to find anywhere else.

Co Loa is the place preserving the ancient relics of the Au Lac capital under An Duong Vuong in the 3rd century BC and of the feudal state under Ngo Quyen in the 10th century AD. It is a land associated with the legends of the Hung Kings from the time the country was founded, so it's not surprising when the village has many unique ancient works, especially the Co Loa citadel - which is the oldest ancient citadel of Vietnam built in a spiral shape. Nowadays, Co Loa is recognized as one of the national tourist attractions, open throughout the year for visitors. In the relics preservation area, there are still ancient works such as Thuong Temple, Ngoc Well, Co Loa, An Duong Vuong Temple. 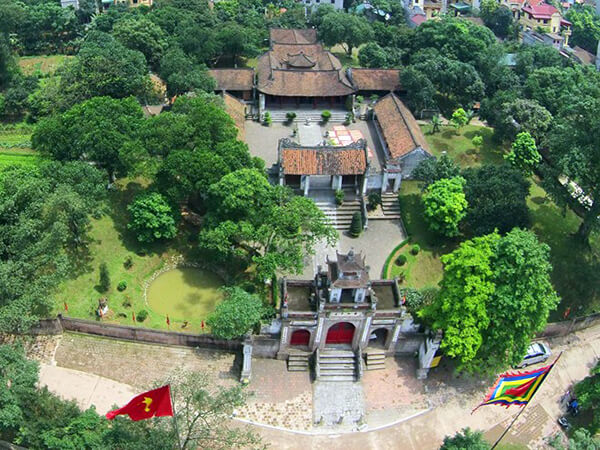 Moreover, as it's located on the outskirts of Hanoi, with clear weather throughout the year, Co Loa in each season brings on its distinctive beauty. However, the most appropriate time to come to Co Loa is in the fall when the weather is cool, and the atmosphere is especially dreamy. Especially on the 1st, 6th, 11th, and 26th of every month, the market is held and attracts many visitors. When coming to Co Loa commune, don't forget to taste the famous mussel porridge here.

Find your tickets to travel from Hanoi below:

About 50km from Hanoi, Duong Lam Ancient Village is located in Son Tay, on the southern bank of the Red River, near highway 32, at the intersection with Ho Chi Minh road. This is the first ancient village of Vietnam honored by the government as a national historic landmark in 2006. With the unique architectural features of an ancient Vietnamese village in the Red River Delta, it is safe to say that Duong Lam Ancient Village is only behind Hoi An ancient town and Hanoi old town in terms of scale and artistic value. 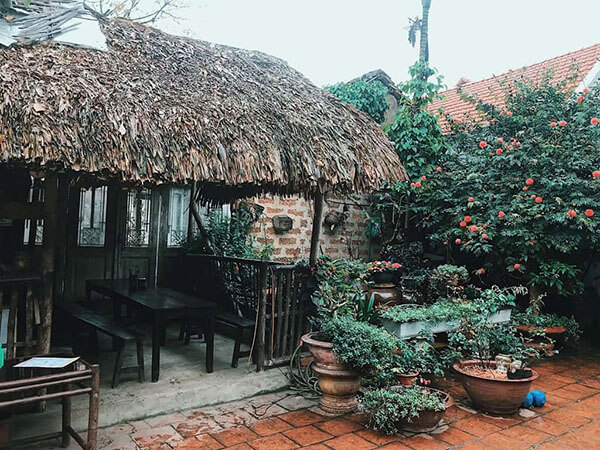 The old houses built of laterite and tinged with moss are special highlights at Duong Lam Village. There are over 900 traditional houses here with a one-of-a-kind gate boasting a reddish roof on top. There are a pagoda, two temples, five communal houses, and other relics in the area that follows the impressive architectures dating back in the earliest feudal dynasties. Duong Lam ancient village is also the hometown of Ngo Quyen and Phung Hung - the two national heroes, so the two temples here are used to worship them. Duong Lam ancient village also has Mia Pagoda - one of the oldest pagodas in Vietnam with over 300 years of history. 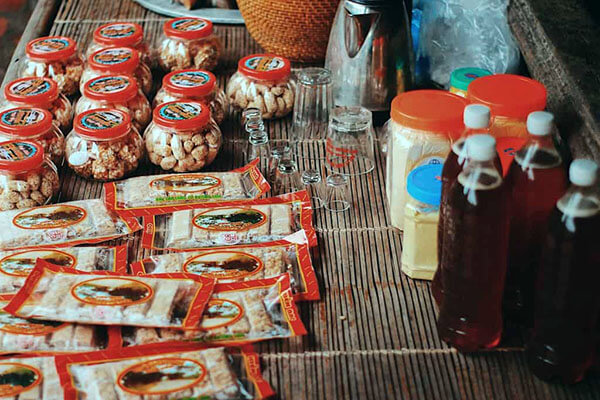 There are many must-try specialties here, such as Keo Doi, Che Lam - or Vietnamese green tea. Duong Lam soy sauce is famous as a traveling gift of visitors coming back from this place.

The village is located on the Nhue River, about 20km from Hanoi. Cu Da is a village in Cu Khe Commune, Thanh Oai District, Hanoi. 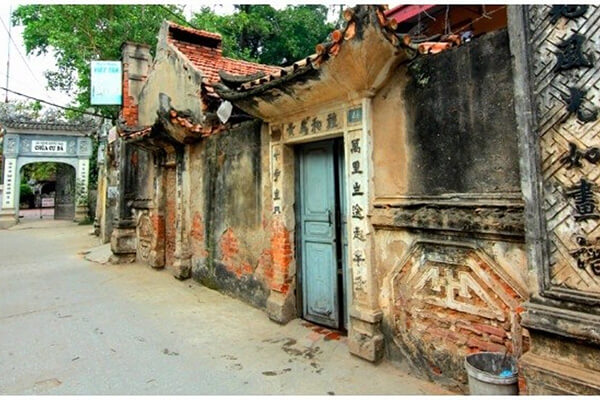 Coming to Cu Da, visitors are coming to an idyllic and peaceful ancient village with many signature 3-story houses. Around the town are the old trees, village gates, palaces and pagodas imprinted with Vietnamese feudal architecture - all of which are treasured as national monuments. Moreover, there are still two-story houses with French architecture built a hundred years ago.

Cu Da Village has long been famous for vermicelli making and soy sauce making. With vermicelli spread on big plates in every house's yard, Cu Da Village portrays the image of an ancient Vietnamese village and is an attractive place to visit as well as experience. 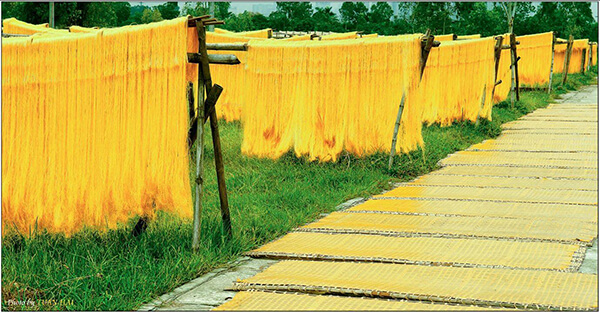 As Cu Da Village is only 20km to the west of Hanoi, visitors can easily reach there by bikes or cars.

Tho Ha village is in Van Ha Commune, Viet Yen District, Bac Giang Province. The village is considered as an oasis surrounded by the poetic Cau River, preserving the traditional cultural values. 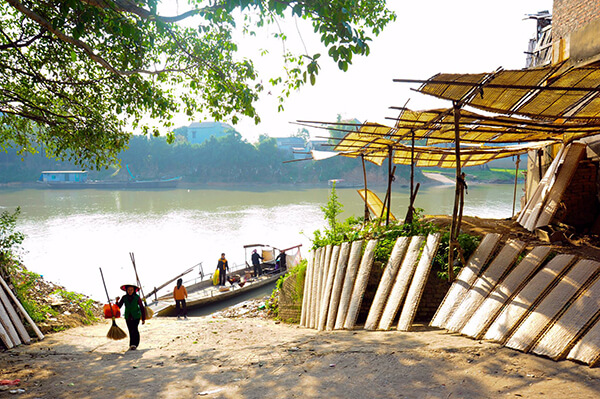 Tho Ha - one of the ancient villages outside Hanoi

Tho Ha Village is famous for its ancient buildings, from houses to village gates and also ancient wells which are made of fired bricks. This place also has an ancient temple and an old communal house of ancient Vietnamese architecture. 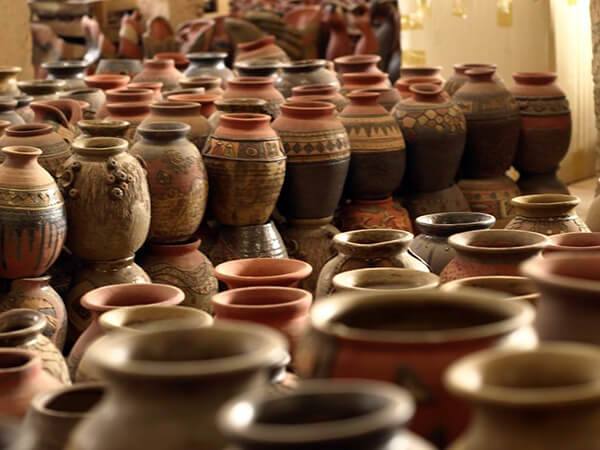 Pottery works at Tho Ha village

In the village, there are still a lot of walls built with small clayware and pottery pieces. The oldest houses are about 300 years old and located in small alleys, distributed in the shape of a fishbone. The roads are only about one meter wide with the two sides are moss-tinged walls. It may take courageous travelers to enter, and keen photographers who are looking for avant-garde photoshoots.

Coming to Tho Ha ancient village in spring, visitors can participate in the village festival and immerse in the traditional folk culture space with many vibrant activities. Especially when coming here, tourists can get on the boat, rowing down the Cau River to enjoy the soothing and romantic folk songs.

Nom Village is the other name of Dai Dong Village in Dai Dong Commune, Van Lam District, Hung Yen Province, 30 km to the east of Hanoi. The area embodies many cultural traits of the old "Vietnamese village community". 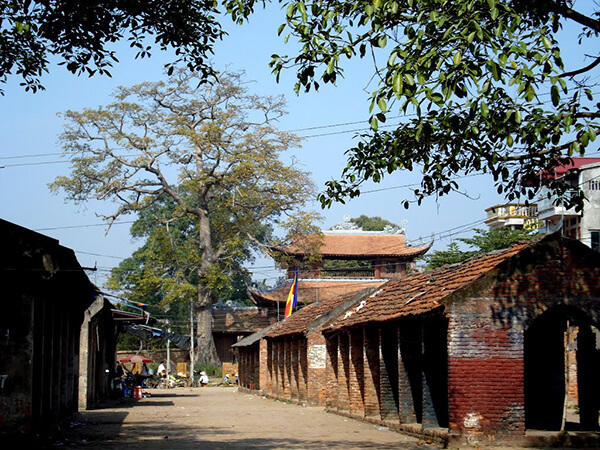 Nom Village is an ancient village in Hung Yen, 30km from Hanoi

Nom Village fully gathers the conditions to become a model of Kinh Bac village structure. The center of the village is an architectural complex of communal houses, ancient wells with many old trees, and many other ancient relics dating back to at least 200 years. The must-see place when coming to Nom Village is Nom Pagoda - one of the most beautiful pagodas in the north of Vietnam. 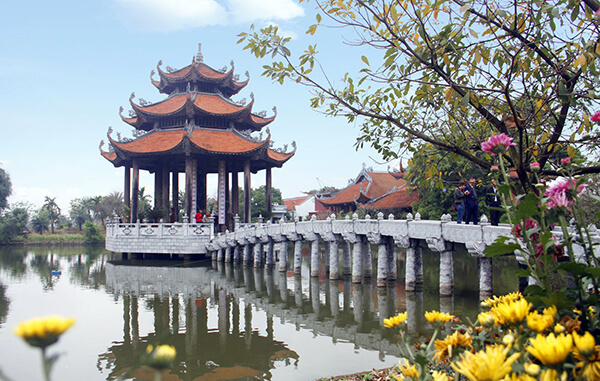 Visitors can easily reach Nom Village from Hanoi by bikes, cars, or even by bus. Catch bus number 40 at Thong Nhat Park to Nhu Quynh, Hung Yen, and continue to take the 01 bus, and you'll arrive in less than 2 hours.

Uoc Le Village is an ancient Vietnamese village in Tan Uoc Commune, Thanh Oai District, Hanoi. This ancient village has made its name for its traditional job of making gio cha; a traditional Vietnamese cold cut made from pork. 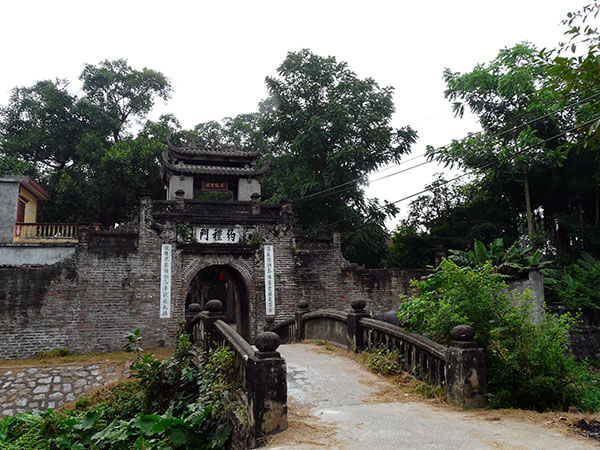 The village still has old houses dating back more than 200 years, some bears the French colonial architecture. Even in modern houses, people here still use the liec on the eaves -  one of the typical characteristics of the architecture in the North of Vietnam.

Endless rows of green bamboos welcome visitors to the village, and it is a signature of ancient Vietnamese communities. Bamboo trees are planted along canals, along the banks of ponds or the streets as a natural protective fence for the village.

When coming to Uoc Le Village, it is essential to try gio cha here, as this is among the most famous traditional dishes of Vietnam. Even the locals have to queue up to by gio cha made in Uoc Le Village. 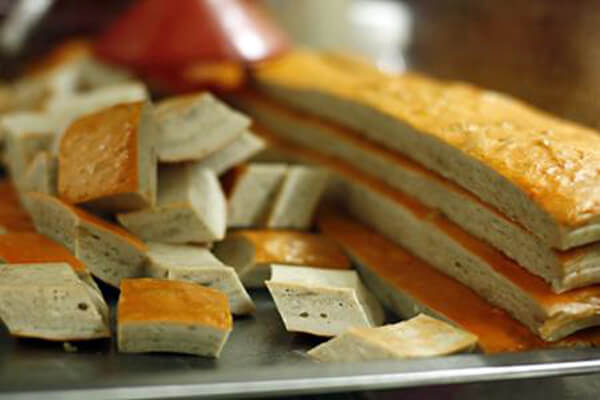 Uoc Le Village is famous for its amazing gio cha

Summary on Peaceful Ancient Villages Just Outside of Hanoi

Vietnam has many interesting cultural sites for tourists, but to experience the real countryside, ancient lives of Vietnam, nothing is better than going to the ancient villages, which doesn’t take too much time, yet still bring invaluable memories and cultural appreciation.

The Best Day Trips from Hanoi

Get Off the Tourist Trails in Hanoi

Sign up for a travel insurance plan to explore more of Hanoi: