Ho Chi Minh City is considered as a cosmopolitan city since it is a combination many cultures. In particular, the most prominent is the development of the Chinese community, especially Trieu Chau people (Chaozhou). For over 100 years, ethnic Chinese brought along their cultural heritage from their fatherland to Southern Vietnam, in which General Quan Cong is considered to be one of the most distinctive characters of the Chinese spiritual culture. In Ho Chi Minh City, Quan Cong is dedicated in several places, including Ong Pagoda. The Ong Pagoda is also known as Quan De Shrine, Nghia an Assembly Hall. 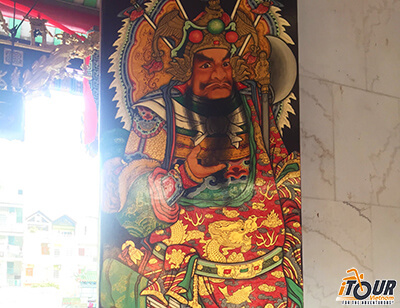 Address of the Nghia An Assembly Hall

Opening hours of the Nghia An Assembly Hall

There is a primary school next to the pagoda. Therefore, if you come to the Ong Pagoda at around 4 PM, this place might be more crowded and busy with students and their parents. We recommend visiting before 4 PM to fully experience the beauty as well as the solemnity of the religious place.

Entrance fee of the Nghia An Assembly Hall

How to get to the Nghia An Assembly Hall

History of the Nghia An Assembly Hall

Nghia An (Yian) is the name of a land in Guangdong, China, where the majority of Chaozhou people live. Since the immigration, this place has been where many Chaozhou gather, and thus, it is called Nghia An Assembly Hall. However, this temple is often referred to by the name of Ong Pagoda by locals because Ong means Quan Cong, to whom the pagoda is dedicated.

It is unclear when the temple was built, according to some historical materials, it is probably around the late nineteenth century by Chinese from Yian (Nghia An). Letters sculptured on the wall indicate that the temple was restored in 1866, 1901, 1966, and 1984. The latest restoration was in 2010.

Although many things have been restored, architectural and artifacts such as pairs of couplet on wooden panels, paintings, sculptures in the temple are well preserved, reflecting a unique ancient culture of Trieu Chau. People here also worship other deities such as Thien Hau, Phuoc Duc, Van Xuong, and Ma Dau General. The careful conservation of the relics has contributed to attracting a large number of people, including domestic and foreign tourists. Stepping through the big entrance, you will feel the absolute quietness and calmness, especially in the morning

The Legend of Quan Cong

Quan Cong (also called Quan De or Quan Vu) is one of the most well-known Chinese historical figures in East Asia. He was a general serving under Tao Thao and Luu Bi, two of the main leaders in the ancient Chinese civil war known as the Three Kingdoms. His image was not only fictionalized in dramas, TV series, and other traditional forms of art like Chinese opera but also deified in folk tales, starting from the Sui Dynasty (581-618).

He is worshiped in many places, especially in Hong Kong. His statues are featured with a red face, long beard, holding in his hand a horse harness or his precious sword which is believed to weigh about 50 kilograms. Quan Cong is considered as a symbol of generosity and loyalty, but historians also criticize him for his arrogance.

Structure of Nghia An Assembly Hall

As the majority of the Chinese temples, Ong Pagoda has the overall architectural shape like the letter Khau (囗) or Quoc (国), meaning mouth or nation in English, which is a closed rectangle with a space in the middle. In general, the temple's structure shows clearly the architecture and decoration of the Trieu Chau (Chaozhou).

The Outside of Nghia An Assembly Hall

The gates with elaborate grillwork and a large carved decorative wall make the temple stand apart from the busy street outside. Moreover, Ong Pagoda sits on a large piece of property, and thus, does not seem cramped like many other attractions in Cho Lon, the Chinatown in Ho Chi Minh City. The entrance of Ong Pagoda on Nguyen Trai Street

The whole pagoda is divided into two main parts. The first one is the courtyard which is extremely large. In fact, this yard is nearly two thousand square meters, accounting for more than half of the whole area. There is a big lake in the yard where people usually gather to liberate fishes to save their lives. 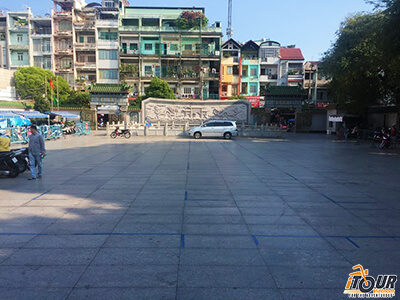 The very large courtyard in front of Ong Pagoda A very large sculpture in the courtyard

The rest are skylight area, incense house, front hall, main hall, and two offices located on two sides of the pagoda. The Chinese style is expressed through the design, statues, ceramic embossments on the red tile roof, reverse carved flowers and unicorns. 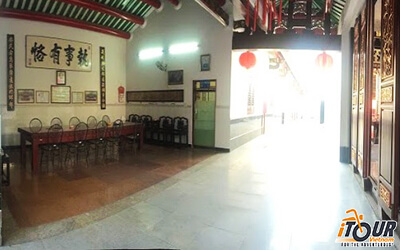 An office in Ong Pagoda

Ong Pagoda roof has 3 levels: the highest is in the middle while the lower is on two sides. On top of the roof, there are statues of two dragons fighting for a big red pearl. 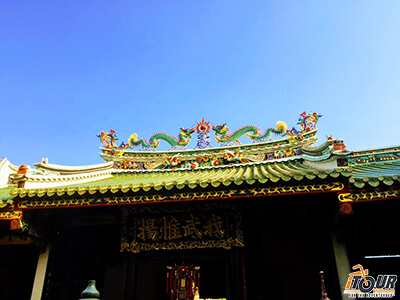 From the large entrance to the temple gate, there are five large pairs of stone unicorn placed symmetrically. The most beautiful is probably the pair of unicorn statues on two sides of the door. Above is the label "Nghia An Assembly Hall", which was created in 1903. On the front wall of the pagoda, there are carvings of Chinese characters and six different carving pictures of bamboo. Two of six pictures of bamboo carved on the wall

The Inside of Nghia An Assembly Hall

The inner design is decorated with elaborate shrines and high wooden posts carved with the couplet pairs. Many exquisite engravings which indicate objects from the Chinese legend like the four mythical creatures like dragon, unicorn, turtle, and phoenix to the daily life symbols such as water and firewood.

From the main entrance, you will see the front hall first, then the skylight, incense house, and last but not least, the main hall. A skillful grillwork at the gate leading to the front hall Passing through the gate, the statue of Ma Dau General is on your right side

On the right of the front hall is the statue of Ma Dau General, who held the Red Horse for Quan Cong. The Red Horse is painted red and over 2-meter high. It is considered to be one of the most beautiful statues of the Red Horse. 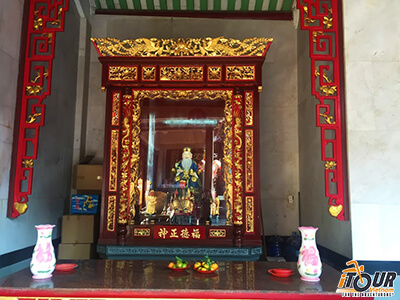 The statue of Tho Dia on the left side

On the left of the front hall is the altar of Phuc Duc (also known as Tho Dia or Ong Bon, meaning the god of earth and land).

The skylight area is located between the front hall and the incense house, which make the whole space much brighter and let out the smoke of incense. The skylight area is very spacious The incense burner in the middle is made in 1825. This is 39-cm high, 46-cm wide, the two sides are embossed with two heads of unicorns, the front has the words "Quan Thanh De Quan". Many people come here, light three sticks of incense and pray good things for themselves and their families. The number three involves an Eastern philosophical conception of the universe: Thien (Sky), Nhan (Man), Dia (Land), called the three resources (Tam Tai). Moreover, this number is also related to the "Luong long trieu nguyet", twin dragons on the moon, which are usually decorated on censers and in places of worship. 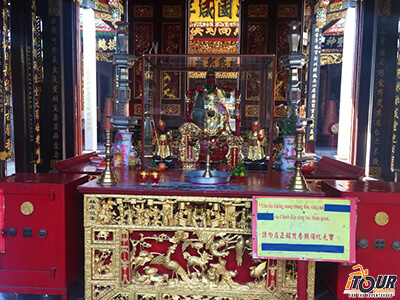 The incense house inside Ong Pagoda The main hall was designed solemnly with statues of Quan Cong in the middle, beside him are the god of fortune (Than Tai) and Thien Hau, who is worshiped in another temple in Cho Lon. The 3-meter high Quan Cong statue is also described with details that have become conventional: a red face, wearing armor and green brocade, sitting on a throne. On his sides, there are two two-meter high statues of his soldiers standing in front of the altar, named Quan Binh and Chau Xuong. A closer look at Quan Cong, Quan Binh, and Chau Xuong in the main hall

Summary on Nghia An Assembly Hall in District 5

Besides Ong Pagoda, there are other famous temples and pagodas around Ho Chi Minh City, you can read more about them here.