The Chinese are an important community in Ho Chi Minh City with their fascinating culture. Cha Tam Church built to serve the Chinese Catholics, because of which, becomes more exceptional and distinct, a must-go destination for those who want to explore the other side of Ho Chi Minh City.

How to Get to Cha Tam Church

Located in District 5, a part of the Chinatown in Ho Chi Minh City, and surrounded by temples, Kim Bien Market (a preservatives market), and a well-known Chinese street food named Den Nam Ngon (Five Lights), the church stands out with its unique architecture.

You can find the church near the intersection of Tran Hung Dao Street and Hoc Lac Street. It is approximately 6 kilometers away from Ben Thanh Market, so it might take about 20 minutes to arrive there if you go by taxi. For detailed fare, please check this post about traveling by taxi in Ho Chi Minh City.

In case you are looking for some unforgettable memories, you can try the buses. The first option is to take bus number 96 at the Bus Centre to Ta Uyen Street and then walk for about 300 meters to the church. The ticket price for this 30-minute journey is 10,000 VND. Check out our blog about the public bus in Ho Chi Minh City for more detailed routes.

Sacrament of Penance and Reconciliation

7 AM - 12 PM, 2 PM - 6 PM, and 7 PM - 9 PM every day. Make sure that your visit coincides with the mentioned time so that you can peacefully admire the architecture and the atmosphere of the sanctuary

The History of Cha Tam Church

Officially established in 1990, Cha Tam Church has contributed to the development of the Chinese Catholic community in Vietnam. Back in 1898, the number of Chinese Catholics decreased dramatically, which caught the attention of Bishop Jean Dépierre. He delegated Priest Francis Xavier Tam Assou, who was widely known as Father Tam, or Cha Tam, to Cho Lon in the hope of recovering and improving the Catholic life of the Chinese community.

Father Tam found a good piece of land in the center of Cho Lon. Ideal as it might seem, Father still had to pay a lot of effort to build the church here. Although the land had left uncultivated for nearly 20 years, it was jointly owned by 9 Chinese Vietnamese businessmen. By the time Father Tam discovered it, they had all left Vietnam to continue their business in different countries such as China, Singapore or Thailand. He needed the signatures of every member of this group (or their heirs) in the selling agreement to have the right to continue the process. He eventually gathered eight signatures, while the last person was nowhere to be found. Fortunately, the rest of the group claimed that the businessman had died since they were also unable to keep in touch with him, and promised to take the responsibility in case the opposite situation happened.

Father Tam got the land, but he was unable to raise enough money to build the church as there were not many Chinese Catholics. He then came to ask for help from the non-Catholic families, but the budget still needed more than that. In the end, he made a creative yet bold move. He decided to meet the Abbots of nearby temples and pagodas and seek support from them. The reason he gave at that time was that Buddhism and Confucianism had already got a steady place in the community, it was time to give Catholicism some encouragement to grow. Surprisingly, his call for help was accepted.

After completed the church and raising the number of Chinese Catholics, Father Tam used the spare money to build a school, a kindergarten, a dorm and some houses for rent. And to honor his merit, his remains were buried next to the main gate of the church after he passed away. After 1934, without Father Tam, the parish deteriorated, and the number of the Catholics declined. The arrival in 1952 of the Fathers from the Paris Foreign Mission Society in China lighted up the situation. In the next few years, they also opened some other churches for the Chinese community in Ho Chi Minh City such as Duc Ba Hoa Binh Parish, Binh Phuoc Church, Epiphany Church and more. The Fathers in Cha Tam Church are now responsible for directly administering all the church for the Chinese in the South of Vietnam.

The whole church was designed by Father Gioan Baotixita Huynh Tinh Huong with a Gothic vibe like any other churches in the same era, but also emphasize with some characteristics of Chinese culture to reflect the nature of the church. The unique architecture makes it one of the must-visit churches besides Ky Dong Church, Notre Dame Cathedral, Tan Dinh Church in some big Christian holidays like Christmas.

Outside of Cha Tam Church

The main gate of Cha Tam Church is a Paifang, or a triple-arched entrance, an iconic structure of China. The name of the church is written in Chinese characters, and the roof is made from double tiles. Father Gioan decorated the rooftop based on the image of two dragons flanking the Moon, but he used two carps instead of the dragons, and the Christian cross in place of the Moon.

From the gate, you can see the front of the church with the soaring main tower, the symmetrical decorations such as ogival windows or cylindrical pillars that is undeniably the Gothic style. However, some ideas of Chinese philosophy were skillfully incorporated. Some buds of the lotus flower are found on the roof, and all the other details are intentionally combined by the rules of the Yin and the Yang, the Five Elements, and the Yi Jing - the Book of Changes. For example, the highest floor has an octagonal shape with eight windows and the roof is divided into eight parts correspondingly. Together, they represent 64 hexagrams of the Yi Jing.

The church is surrounded by a tranquil garden of which a Chinese pavilion sitting at the center. A statue of Our Lady is placed inside, and behind it are two gold-emulsion reliefs that commemorate more than 200 martyrs. 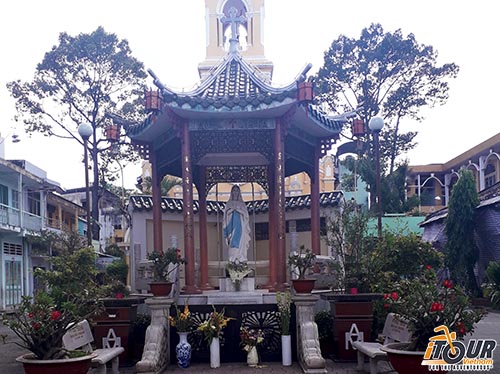 Behind the statue of Our Lady, there is a relief for the Chinese martyrs and the Vietnamese martyrs A Jesus statue in the garden

Inside of Cha Tam Church

Overall, the nave of Cha Tam Church follows the Gothic style, but it is also extraordinary with many exclusive details. On the top of the central cross is the word “Phuoc”, means “Blessings”, and around it is four pillars in Vermillion, a color that cannot be found in all the buildings of a similar structure. The two pillars next to the statue of Jesus Christ have two illuminated Chinese panels with carved black words. The wall and the ceiling are painted in white and mint green to bring a relaxing atmosphere for the Catholics and the visitors. The gate to the nave of Cha Tam Church On the grounds of the parish, there is a charitable clinic established more than 20 years ago. On the morning of every Monday, Wednesday, and Friday, the clinic organizes medical appointments and medicine provision for the local without taking any fees. Patients would be treated with Western medicine, Eastern medicine, or acupressure - acupuncture, depends on their needs and conditions. Although every service here is free, all the doctors and supporters are still highly skilled and friendly.

Besides the medical service, Cha Tam Church also provides free lunch to the poor and the lonely elderly in the nearby region. More than 100 meals with a variety of food are given out every day. On special occasions like the Tet holiday, the church also quietly donates money and gifts for the poor. To make all these meaningful activities happen, the Fathers have to ceaselessly call for support from the benefactors and the local Catholics. The church also holds many interesting activities to help the kids and the teenagers at the parish entertain as well as be more connected with the church. Usually, the boys here would join the Southern Lion Dance group, and the girl would take part in the Chinese dance team. Both groups have performed and paraded in plenty of holidays during the year, and have received lots of admiration and approval from the local. They even won several awards in the competitions of Ho Chi Minh City.

Despite being outside of the city center, Cha Tam church is still worth a visit to admire its outstanding architecture that cannot be found anywhere else. If you happen to be in the Cho Lon area and exploring nearby places on foot, stop by Cha Tam. Owning a mixture of European and Asian style, and an important place in the community of Chinese Catholics, the church has contributed to the intriguing culture of the city, earning the title of one of the best churches in Ho Chi Minh City.

Find the best hotel to stay in Ho Chi Minh: