The Muslim population of Vietnam is utterly modest, but there are around a dozen mosques in Ho Chi Minh City, scattered across downtown districts. Read our guide to know more about Islam in Vietnam, Islam in Ho Chi Minh City, why so few Vietnamese follow this globally popular religion, and what is special about an international mosque called Musulman Mosque, located in the heart of District 1, Ho Chi Minh City.

Despite being the second biggest religion in the world, Islam is not popular in Vietnam. In fact, many Vietnamese would think that it is non-existent in Vietnam. This is understandable since chances of encountering a Muslim in Vietnam do not even reach 0.1%.

The majority of Muslims in Vietnam belong to an ethnic group called Chams, or Cham people, mostly living in certain provinces of central and southern Vietnam. The population of the Cham ethnic group in Vietnam is around 160,000 (2009), and about half of them are Muslims. Besides Islam, Cham people also followed other religions like Hinduism and Buddhism.

As investigated by Vietnam’s Government Committee for Religious Affairs, Islam entered the Cham people community as early as the 10th century through trading activities of the people with merchants from central and eastern Asian countries. However, it did not really develop until the 15th century when the main religion of the Cham people at the time (called Balamon) got weaker following major changes happening within the Cham society. The spread of Islam during this period was largely thanks to a group of Cham people who adopted Islam through their close contacts with Cambodian, Malaysian, or Indonesian Muslims.

The Muslims in Central Vietnam (in Binh Thuan and Ninh Thuan provinces) compared to Muslims in Southern Vietnam (in An Giang, Tay Ninh, Ho Chi Minh City, and Dong Nai), adopt a more synthetic approach to their religious practice, making modifications that match local customs and the Cham’s own traditions, rather than following strictly to the formal tradition of Muslim around the world. The diet rule ‘halal’, however, is strictly observed in all regions; the ‘halal’ rule essentially prohibits pork consumption and discourages the use of animal fat and blood in general. Halal restaurants are typically opened in the vicinity of a mosque.

Why so few Vietnamese follow this globally popular religion?

First of all, Vietnam is not a very religious country; even the major religions in Vietnam, i.e. Buddhism and Catholicism, account for only 19% of the population. Instead, another form of spiritual practice omnipresent in Vietnam is praying to the family's ancestors or other 'local’ deities. This can be referred to as folk religion.

The fact that it is mostly practiced among Cham people and not other major ethnic groups in Vietnam like Kinh people, can be another explanation for this situation.

Ho Chi Minh City is one of the few provinces/cities with the presence of mosques, and the number of mosques here is surprisingly high. There are around a dozen mosques in Ho Chi Minh City, located where there are many Islamic residents like in districts 6, 8, Binh Thanh, Phu Nhuan, and a part of District 5 bordering with District 1.

The Muslims in Ho Chi Minh City is also predominantly of Cham ethnicity, but their hometown is actually in An Giang Province located in the southwestern Mekong Delta region. Although migrating to a new big city like Ho Chi Minh City, the Cham chooses to continue residing in clusters for convenience in religious practice and maintaining solidarity.

Entrance: free. Visitors are welcome to visit and take pictures of the mosque but required to wear formal clothes (which means no shorts and revealing clothes) when visiting the mosque. 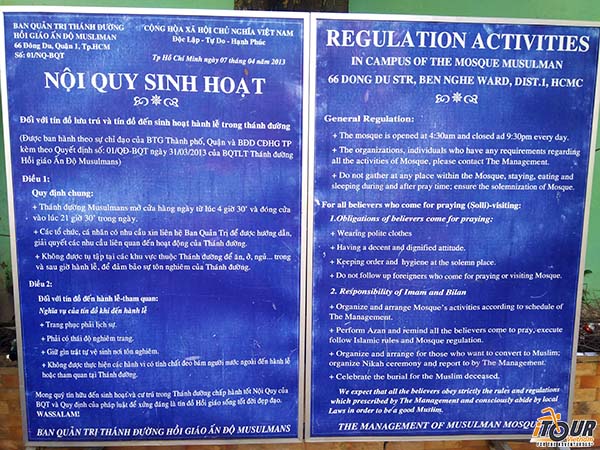 Opening hours: 4:30 AM - 9:30 PM. But if you want to see the main prayer hall, you should come around and after 12:30 PM since doors of the prayer hall are closed before this time.

Parking: free for motorbike riders. There is not enough space for car parking, so cars should be parked in the parking lot of the Sheraton Hotel right next to the Musulman Mosque.

Musulman Mosque in Ho Chi Minh City, otherwise known as Jamia Al Musulman Mosque, was built in 1935 by Indian expatriates and is the biggest mosque in this city, occupying an area of 2,000 square meters. Turning 83 years old this year (2018) but looking fine as ever, the green mosque with its immaculate look proves the good maintenance it enjoys. Its salient appearance in the street of Dong Du is even further enhanced by a stunning backdrop of high-end hotels in District 1. However, few people know that the birth of the mosque was actually in 1900 and got its cover retouched 35 years later by a French architect who did the job for the benefit of dedicated Muslims rather than for personal profit. 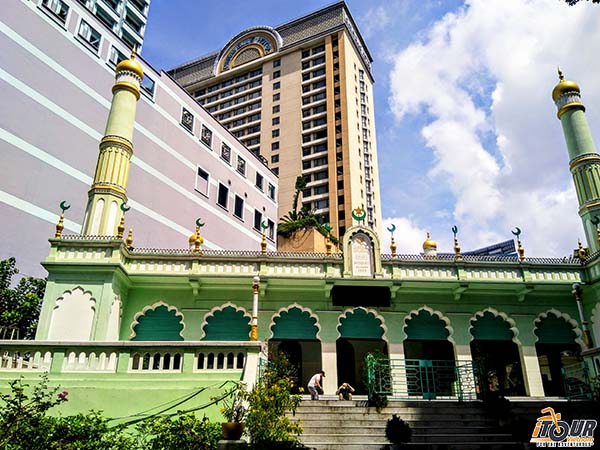 Musulman Mosque with a stunning backdrop - Caravelle Hotel in District 1

It is said that the initial purpose of the Musulman Mosque was to cater to the religious practices of Southern Indian Muslims who lived as expatriates in Ho Chi Minh City, but now obviously it has welcomed and been well maintained by local Muslims.

Within the premises of the Musulman Mosque are Noorul Imaan Arabic School and Haji Jmm Ismael Library, these names carved in two golden boards on the left pillar at the entrance. 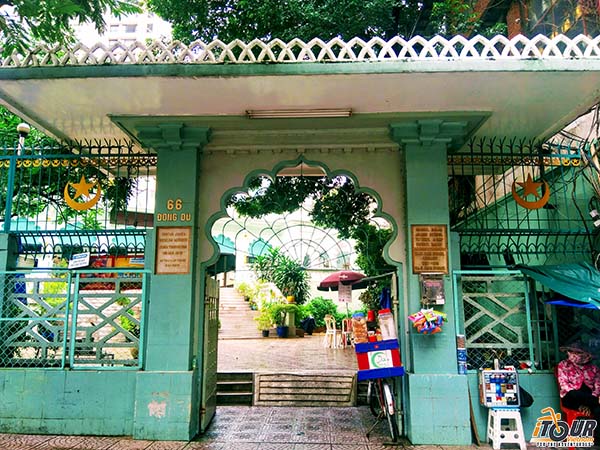 Gate of the mosque and the two golden boards on the left pillar write: Noorul Imaan Arabic School and Haji Jmm Ismael Library 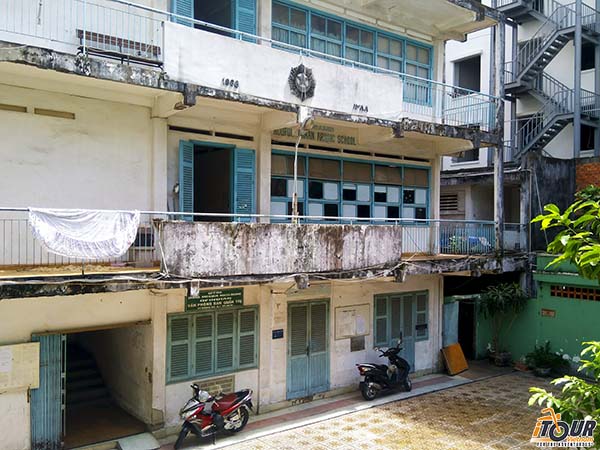 Noorul Imaan Arabic School down the stairs on the right of the main prayer hall, hidden deep behind the courtyard

At prayer timings, male Muslims in the surrounding area get themselves cleaned and washed, go to the mosque dressed in their traditional apparel to chant Quran (Islamic scripture) and pray for health and peace for their family. Praying to their God (Allah) at the 5 salah times is a quintessential ritual of Islam and is compulsory for all Muslims; at least once during this five times, men have to go to the mosque to say the prayers. Females are not encouraged, or to be more precise not allowed, to go to the mosque for praying, except during Ramadan - the fasting month of Islam. This is because praying must be done with a pure soul and mind, not disturbed by any unrighteous thought, while women are believed to be a source of distraction for men.

Musulman Mosque possesses an impressive but friendly look with the main theme color being green. Its design is delicate and characteristic of mosques in Southern Asia.

The typical components of a mosque are present here, but with its own idiosyncratic touch: a spacious courtyard (called ‘sahn’ in Islam), a large prayer hall, a ‘mihrab’ (a niche in the wall) representing Allah (meaning ‘god’ in Islam) and the door to Mecca - the holy city of Islam, and ‘minaret’ (tower) symbolizing the power of Islam.

Mihrab is positioned at the center point of the main prayer hall of the Musulman Mosque, and two minarets stand conspicuous to visitors from the outside. The main prayer hall is large with fascinating green-and-orange doors and indeed resembles a Vietnamese house in that its walls are covered with pure white marble tiles, floors with colorful geometric patterns, a regular feature in Islamic design. 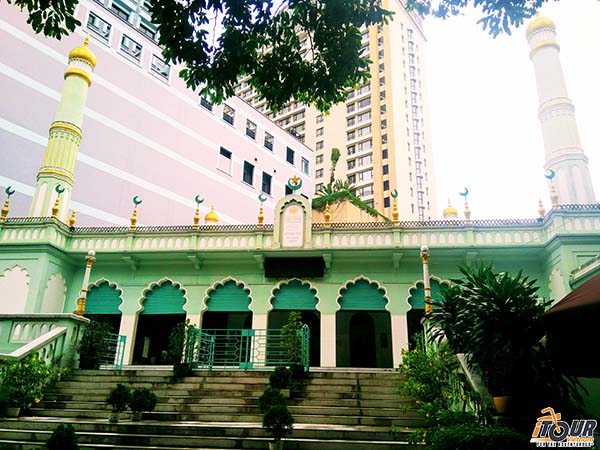 The two conspicuous minarets - towers that embody the power of Islam 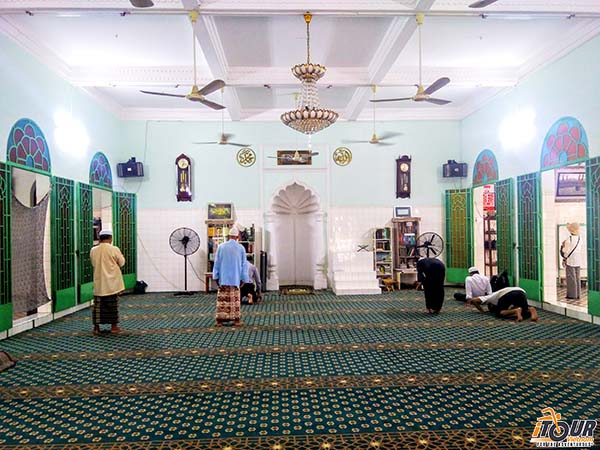 Prayer Hall, with mihrab at the center 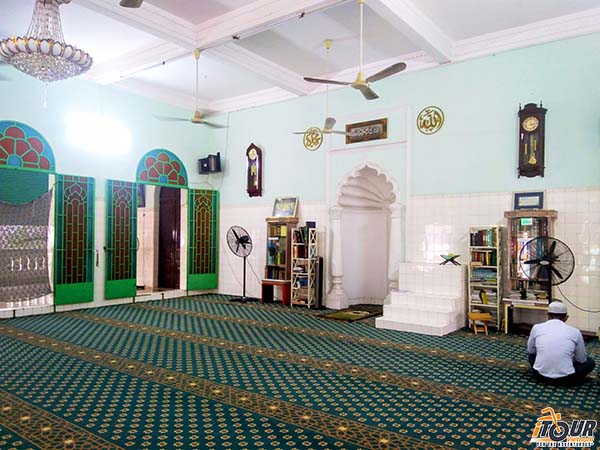 A closer look at the Prayer Hall center, bookshelves of over 100 Islamic holy books on both sides 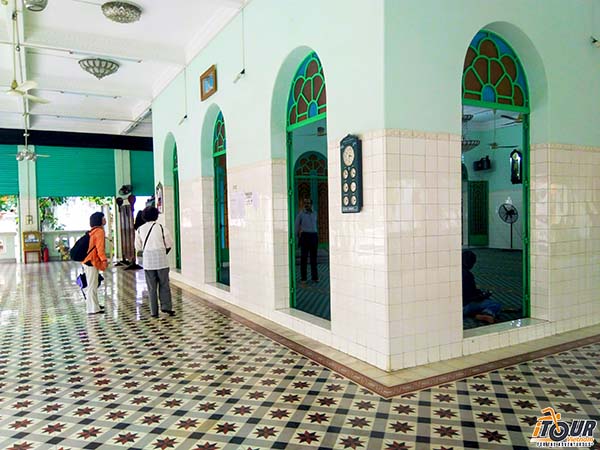 Stars and crescents are frequent symbols one can spot everywhere in Musulman Mosque. Crescents represent Islamic calendar and stars represent adherence to Allah’s will. 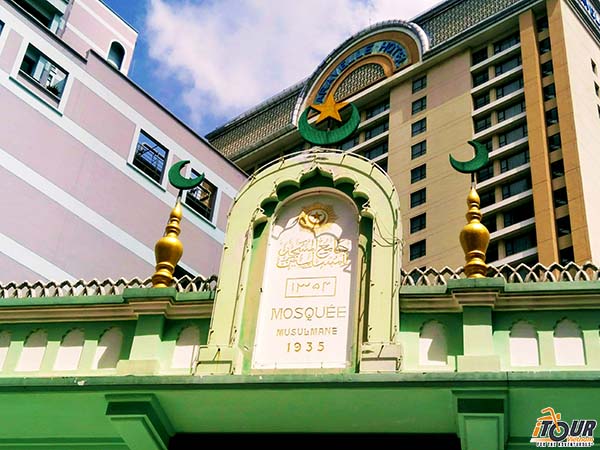 Crescents and stars are regular symbols. 1935 is the foundation year

Besides, one of the highlights of the Musulman Mosque must be a large ablution area (for ritual cleansing before prayer times). 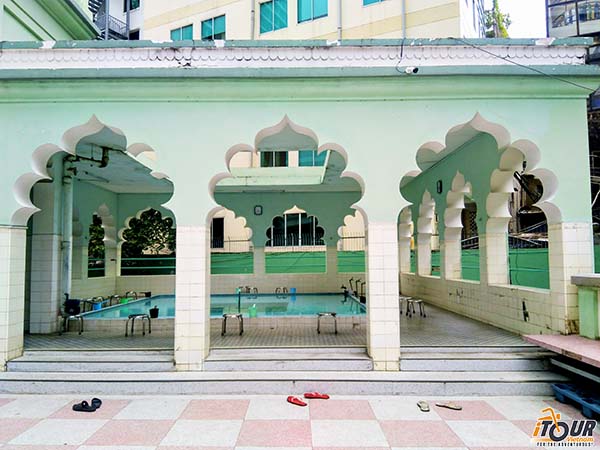 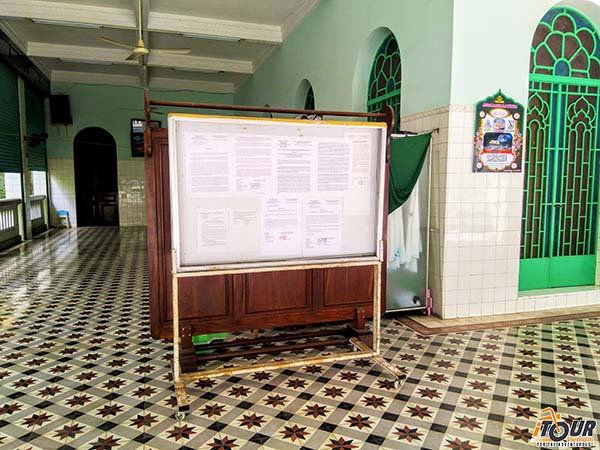 To the right of the main doors to Prayer Hall, a notice board for announcements of religious events in the year 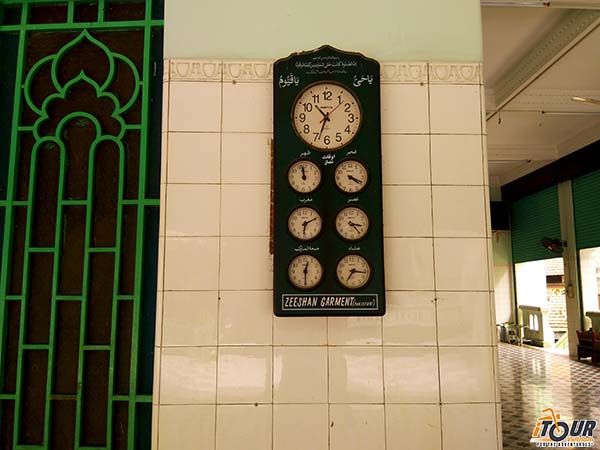 5 clocks with Arabic words on them, indicating the 5 salah times of a day 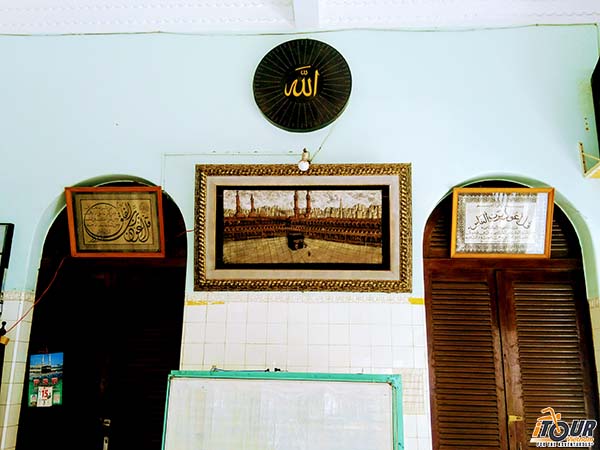 Painting of Mecca, the holy city, hung on the wall of the right corridor of the Prayer Hall 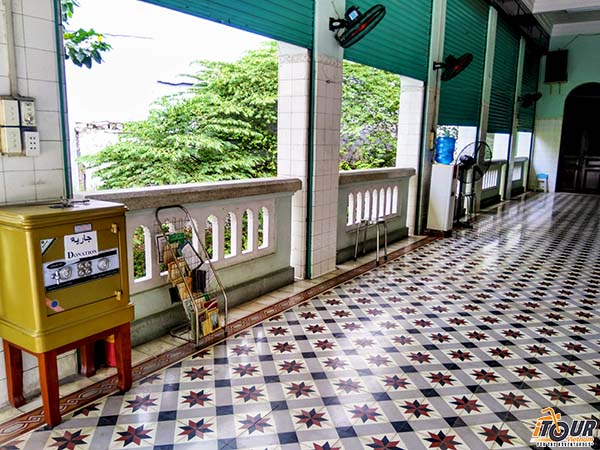 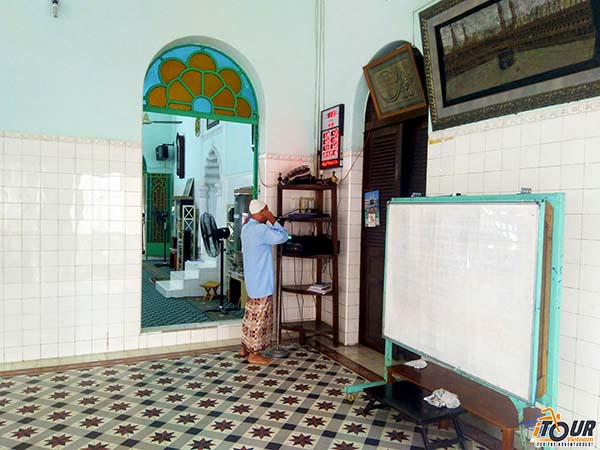 At salal time 3:30 PM, a man chanting prayers to the microphone 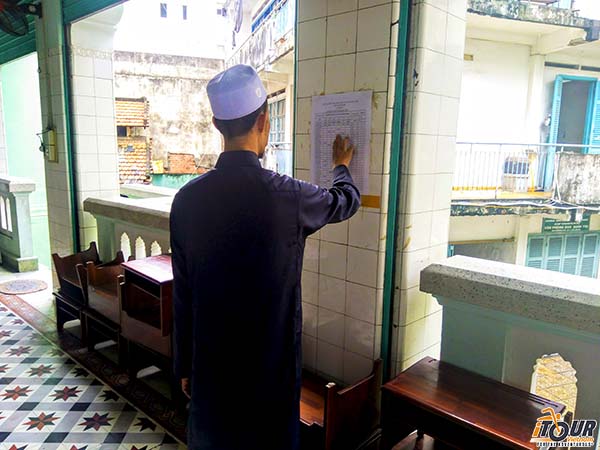 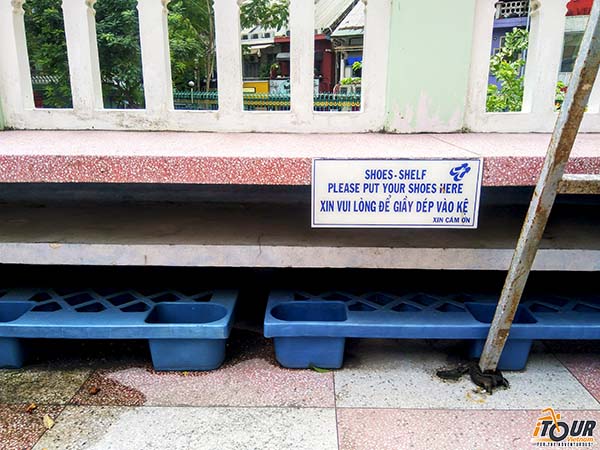 The presence of mosques in Ho Chi Minh City again proves the diversity of this city. Musulman Mosque is a friendly religious site for all visitors and is considered by many a wonderful shelter from the heat of Ho Chi Minh City, especially at noon.

If you’re interested in a cultural tour or a get-to-know tour of Ho Chi Minh City, feel free to contact us for any help you need. We are always willing to design a private, customized motorbike tour just for you! Or read our Vietnam blog for more intriguing posts on Vietnam.