It is no doubt that motorized vehicles have been an important means of transportation for many decades. And the motorbike is one of the most convenient and popular means of transportation in Vietnam. In many big cities like Ho Chi Minh City, you can find various brands of two-wheelers, such as Honda, Piaggio, Yamaha, Harley-Davidson, Kawasaki, Triumph, and Ducati. But many foreigners, and sometimes even locals, are confused about the differences used to address the types of the 2-wheel automobiles: motorbike, scooter, and Vespa. In this guide, you will find out how to distinguish them in Vietnam.

As a way of making travel easier for everyone, there were so many inventions in the history of the two-wheeled vehicles. Indeed, the first motorbike was presented to the world in 1885 and considered as an evolution of the “safety” bicycle. Just a few decades later, in 1914, the first scooter was introduced as an easy-to-ride mean of transportation with the user-friendly model. And in 1946, the first model of Vespa scored a remarkable success in Italy based on the form of a scooter but with an upgraded engine and design.

Invented in Europe but the motorcycle is now more popular in the Eastern sphere, especially Southeast Asia, with Japan as one of the largest motorbike manufacturers in the world after the introduction of their first motorcycle, called Dream. This industry has been up-to-date to meet the requirement and expectations of all riders around the world no matter it is Europe or Asia.

The Differences of Motorbike, Scooter and Vespa (in Vietnam) 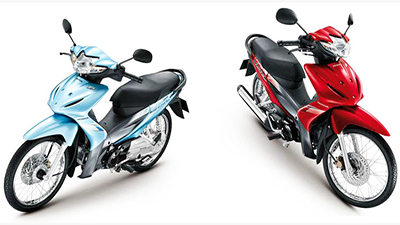 The motorbike was invented in German to save time and effort for bike riders by forming an engine. After many decades reinvented, the first motor attached to bicycle frames, eventually leading to complete motorcycle production model in 1900. The engine, which is exclusively made for motorbikes, is upgraded from the steam engine to two-stroke or four-stroke internal combustion. The design of motorbikes has been changed continually and its engine also to satisfy many different types of users.

In Vietnam, the motorbike can be understood in general as "xe gan may" (literally means bikes with engines), but some locals may call motorbikes “Honda” because this is the most popular brand with Vietnamese. It is normal for you to see the “Sua Honda” board along the streets where you can repair your motorcycles. On the parking fee boards at some parking lots, you may also see people translate "xe so" as "motorbike" in English, to distinguish with "xe tay ga" or "scooter". 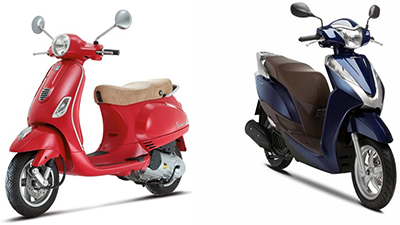 Scooter had been invented in 1914 with the design is suitable for those who prefer easy-to-ride transportation. The first model of the scooter was a motorcycle with a step-through frame, a platform for the rider's feet, and a 50cc single-cylinder to 850cc twin-cylinder engine.

The scooter in Vietnam is commonly known as xe tay ga (auto transmission motorbike). There is one thing that Vietnamese people usually prefer "xe so" motorbikes to "xe tay ga" scooters is the price. Most scooters are more expensive than motorbikes. The price difference could be as large as a double amount.

Thanks to its accessibility and affordable price, both the motorbike and scooter are now found almost everywhere in not only Vietnam but also Asia. Their popularity in Vietnam is up to 45 millions of two-wheeled vehicles, which means 2 Vietnamese people will share 1 motorbike or scooter. 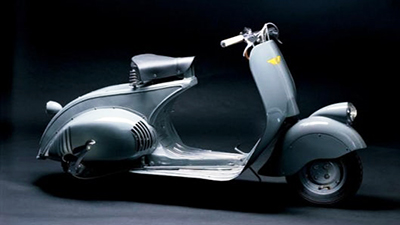 Being a cultural icon in motorcycle history, Vespa - a product of Piaggio brand - always maintains its reputation. Vespa was an evolution of scooter during the World Wars in Italy. It was then introduced in 1946 and became a phenomenon in the entire Europe when it reached the number of one million units in 1956.

The very first Vespa appeared in Vietnam when the French occupied this country, and it was soon widespread on Saigon’s streets just a few years later. Nowadays, the classic Vespa is not very widespread in Vietnam, but there are groups of people who love to collect these old samples. Meanwhile, the modern ones of Piaggio are still popular and trusted by Vietnamese, making Vietnam a good market for Piaggio’s to release their latest Vespa with elegant style and affordable price.

Vespa is sometimes used as a common noun to address motorbikes in some countries (like how Vietnam associates Honda with motorbikes) but in Vietnam, the distinction is quite clear; Vespa is just another brand of motorcycles.

To every traveler coming to Vietnam, you see the unique point of this country is the diversity in transportation, especially the two-wheeled vehicles on the street. Vietnam, where the motorbike is considered as a manual transmission motorbike (xe so) and the scooter is known as an auto transmission motorbike (xe tay ga), is crowded all day and night but vibrant and dynamic. So, why not taking a ride with us to experience this riding culture.

Read more on Vietnam bikelihood or join us on a Ho Chi Minh City motorbike tours with our local guides here.

Ride with i tour and you'll learn so much about the city. The motorbike is actually not that scary

0 Cancel Reply
Ride with i tour and you'll learn so much about the city. The motorbike is actually not that scary
Cancel Update Comment
First Page Previous Page 1 Next Page Last Page