Nestled in the bustling commercial hub of Saigon's Chinatown is a small quiet temple named Minh Huong. The temple is frequented by Chinese (“Nguoi Hoa") and Vietnamese alike for its famously sacred atmosphere as well as the cultural representations in Ho Chi Minh City.

The temple is only crowded on special days such as Buddha’s Birthday or on Tet Holiday. It’s relatively vacant on most days so you can freely stroll around and take pictures.

In contrast to other famous temples and pagodas in Ho Chi Minh City, Minh Huong Temple is very small and cozy, so we recommend that your visit last about 30 minutes.

Getting to Minh Huong Temple - Phuoc An Assembly Hall

Minh Huong Temple is 15-20 minutes away from the heart of Ho Chi Minh City (Ben Thanh Ward) if you travel by motorbike or taxi.

You can also hop on a bus to look at our streets and escape the traffic at only VND 6,000/person. However, it would take you up to twice the amount of time. Some buses passing by the temple are 150, 07, 08. For better navigation, download the app Busmap in Ho Chi Minh City.

The Foundation of Minh Huong Temple - Phuoc An Assembly Hall

In 1865, the Minh Huong Chinese living in Saigon from Quang Dong, Fujian, and Zhejiang renovated An Hoa Assembly Hall into Minh Huong Temple - Phuoc An Assembly Hall as a place to get together and practice religious beliefs. The construction was refurbished into what we see today in 1902.

Most Chinese temples in Ho Chi Minh City mainly worship Quan Cong, and Minh Huong Temple is not an exception. That’s why this place is still referred to as Ong Pagoda sometimes, but it’s not the grand Ong Pagoda on Nguyen Trai Street.

Like other temples/pagodas in District 5, Minh Huong Temple is the religious representation of the Chinese. While Ba Pagoda built by the Cantonese and Hainanese worship Ba (goddesses), Ong pagodas built by Chaozhou and Fujian worship Ong (gods), this Minh Huong Temple worship every God (both male and female) popular among Chinese. There are Quan Cong from Confucianism at the main hall, traditional Chinese Gods like Ba Ngu Hanh (Wu Xing God), Ong Bon Dia (Ground God) on the sides, and statues of Phat Ba Quan Am and Phat Di Lac from Buddhism on the way in. 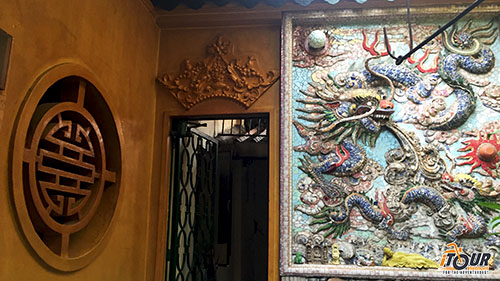 An embossment dedicated to Buddha

Some people explain that since living far away from home is never easy, the Chinese community in Saigon in the 20th century had to hold tightly on their fellow countrymen, so they had to be inclusive of everyone's religious beliefs. Furthermore, they had to teach each other the philosophies of living through a blended harmony of different religions to prosper in a strange land.

The temple is separated into 3 areas:

The front hall is a small area overlooking a bright red gate. There is the Red Horse of Quan Cong on the left that people worship for good luck. 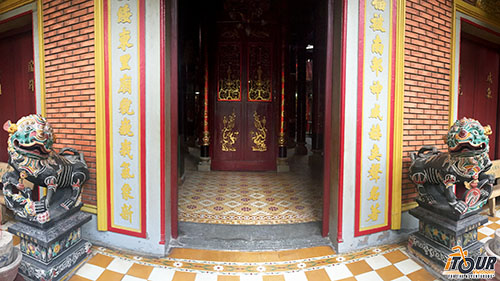 The front hall and the small yard 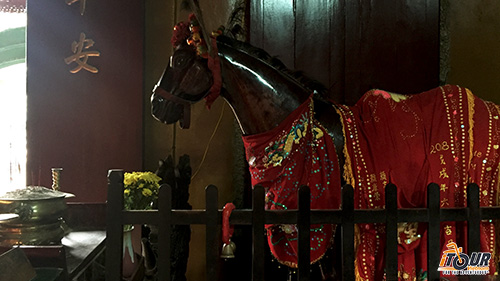 The signature horse of Quan Cong

The middle hall is more spacious, with the main point being the large carved censer in the middle of the hall. 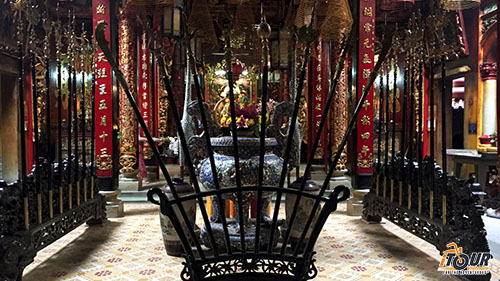 The main hall is where all the worshipping takes place. There are Quan Cong, Wu Xing God on the right, and Ground God on the left, shining brightly in ornate reliquaries. 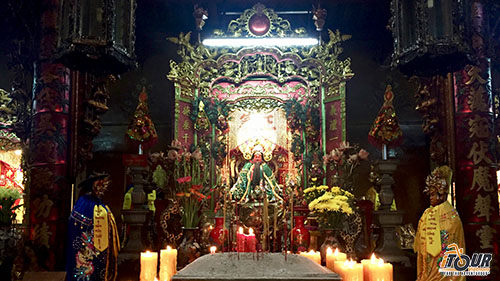 Quan Cong is revered in the middle 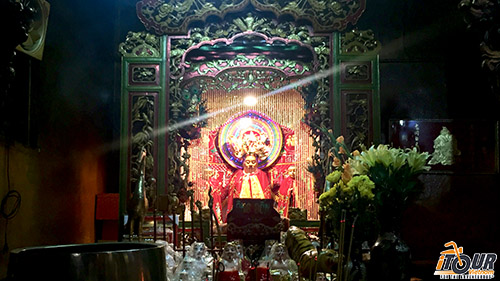 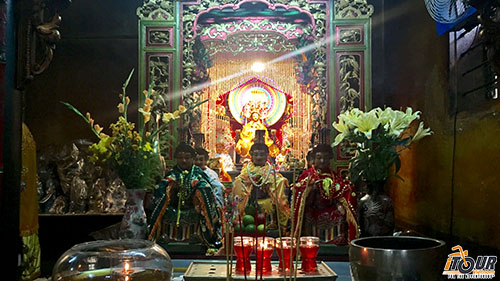 The temple’s architecture is unmistakably Chinese with wood and ceramics. The temple's facade let out an archaic and mysterious vibe with intricate carvings on the roof and the gates. As for interiors, red, yellow, and brown are the three dominant colors of the temple with wood, laminated bronze, and bright paint, all bring up a warm and holy atmosphere in the worshipping areas.

The temple possesses many valuable antiques such as old worshipping statue dated back 300 years, ancient censers, furniture, and especially the precious cases containing bronze artifacts from the Thanh Dynasty. 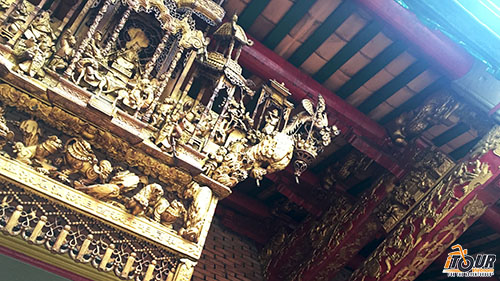 The boat carrying Chinese to the world

Another interesting point is the coiled incense on the ceiling that takes a week to completely burn out. They make fascinating shadows on the walls that are perfect for photographs. 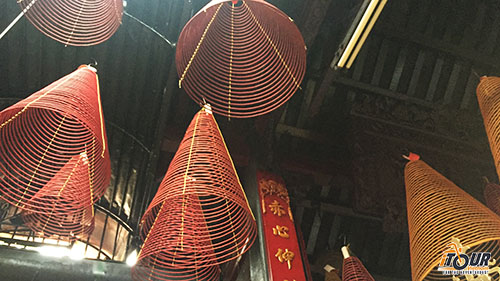 The incense that brings a special aroma into the temple

Over a century has passed, yet Minh Huong Temple - Phuoc An Assembly Hall still possesses irreplaceable values among both the Chinese community and the Vietnamese.

Its architectural significance is undeniable, as it was recognized as an architectural relic of the city, yet Minh Huong Temple made its reputation mainly through its holy power: making wishes come true. If you don’t believe in such powers, there is still no harm in dropping by and try for yourself!

© Written by Chau Tran for itourvn.com