Named after an influential Vietnamese monk, the Minh Dang Quang Buddhist Institute is a huge construction project in District 2, far from Ho Chi Minh City's center. A visit to this sector would give you an instant peacefulness thanks to its quiet and calm surrounding. Moreover, meditation and being mindful are extremely beneficial for your health and have become very popular practices worldwide. So, why not experience these in a Vietnamese pagoda?

How to get there: A taxi costs around VND 100,000 one way and 25 minutes to reach there from Ben Thanh Market. The pagoda is located right on the corner of Hanoi Highway and Mai Chi Tho Street, so it is hard to miss.

Note that Minh Dang Quang Buddhist Institute, as well as other pagodas, require visitors to wear suitable outfits that can cover your arms (no dresses or mini-skirts).

Mendicant Buddhism in Vietnam was founded by Venerable Minh Dang Quang. If compared to other sects of Buddhism, Mendicant Buddhism has only been in practice for over 70 years (1944 - 2018). This period is short but Mendicant Buddhism has developed strongly and has a great influence on the Vietnamese, especially people in the southwest of Vietnam. From 1954 to 1975, Mendicant Buddhism had widely spread to other provinces in the central region (to the South of Hue and Quang Tri). Currently, this Buddhist sect has many followers throughout Vietnam and even in other countries such as Australia, France, Germany, the US, and Canada.

In November 1981, Mendicant Buddhism officially became one of the largest Buddhist sects today in Southern Vietnam and was acknowledged as one of nine Buddhism organizations of Vietnam's Buddhist Organizations.

The Mendicant Buddhist Order is to practice the Buddhist monastic life strictly. Venerable Minh Dang Quang’s disciples had to be vegetarians and could not prepare food themselves but begged for foods on their religious mission journey. Moreover, they only eat one meal a day at noon. These practices are to remind them of poverty and to be humble.

Venerable Minh Dang Quang was born in a Confucian family in Phu Hau Village, Vinh Long Province in southern Vietnam. When he was a kid, he was different from others and expressed extraordinary qualities such as quick-witted, calm, and kindness. When he was 14 years old, unlike other teenagers, he concentrated on studying Buddhism philosophy.

He once went to Cambodia to look for spiritual teachers. However, after many years with Cambodian monks, he was still not satisfied with what he was taught. Consequently, he left Cambodia and returned to Vietnam and meditated for seven consecutive days and nights on To Chau Mountain. After that, he reached the highest level of mindfulness and realized the Dharma - the laws and truth that affect the whole universe.

Venerable Minh Dang Quang carried on his missionary work from 1946 to 1954. However, on the first day of the second month in the Lunar calendar in 1954, he disappeared without a trace. Nowadays, the followers of Mendicant Buddhism still pray for him on this day each year. 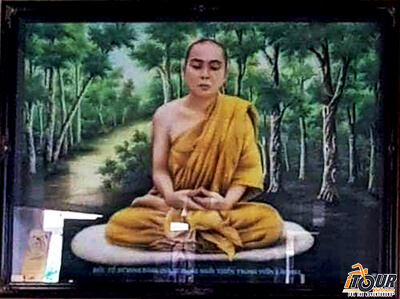 Minh Dang Quang Buddhist Institute was established in 1968. At that time, the institute was converted from a landfill into a small pagoda with a total area of 62,000 square meters. In 2009, it was thoroughly renovated into this vast and peaceful institute. 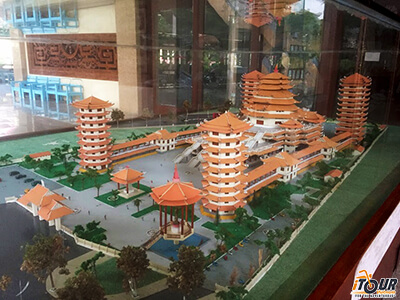 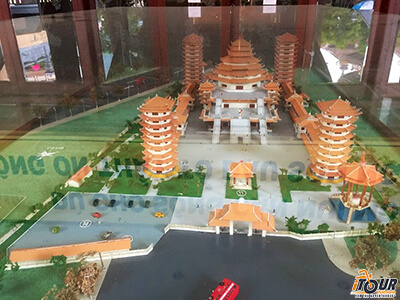 There are four towers in four corners of the area. They are named after four excellent students of Buddha. The ground floor is the reading room. The two towers behind are the places for storing the cremated ashes of monks and Buddhists. Connections between the towers are two-floor hallways. These are created to make room for the practice of Buddhist meditation.

The way leads to the tower

The most important work is the three-flour architecture located in the center. This house is 40 meters in length and 70 meters in height. The highest floor is the traditional octagon-shaped hall with 32 meters in diameter, which worships Buddha Sakyamuni, whose status sits at the top of a rectangular compound designed with long-ears, bald-headed and fingers pointing to the sky. On the second floor is a big and silent meditation hall, 24 meters wide and 50 meters long, with a large altar in the middle.

Underneath meditation hall is the lecture hall, measuring 40 meters in width and 50 meters long. Behind is a large multi-function hall. There is also a basement used as a kitchen and hall.

Behind the main building, there are other social constructions, including a treatment room - Tue Tinh Duong, named after a famous Vietnamese traditional medicine doctor.

The top of the central pagoda features a lotus flower which has cultural significance to Vietnam. The roof and concrete walls are also decorated with lotus symbol. The first and the second-floor halls, like many Buddhist temples, feature prayer halls with decorative images of the Buddha’s life on the walls. 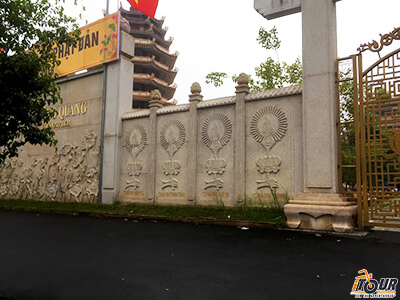 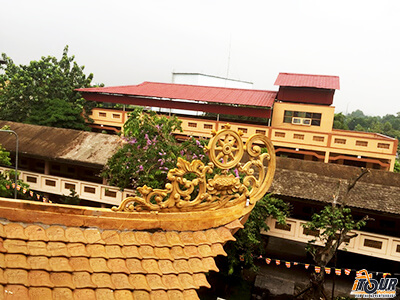 The decorative roof and wall

A few areas are still under construction, but the institute is almost in its final phase with all of the major foundations and main structures have completed.

There are courses that teach meditation and Buddhist philosophy, specialized for different age groups. You can find more information and register for these courses at the pagoda’s page.

A vegetarian restaurant is located on one side of the Minh Dang Quang Buddhist Institute, which offers tasty vegetarian food at affordable prices.

If you want to buy some souvenirs, you can head to the small bookstore next to the restaurant. There are many items like clothes, robes, statues, and incense.

Minh Dang Quang Buddhist Institute is a huge pagoda that you should visit and experience yourself its magnificent architecture.

Get the world-leading travel insurance for your adventure in Ho Chi Minh City:

If you are interested in Vietnamese Buddhism and spirituality, pay a visit to some of the best temples and pagodas in Ho Chi Minh City.