While most of the ancient pagodas and temples in Ho Chi Minh City were originally established by the Vietnamese or the Chinese emigrants, Mariamman Hindu Temple is a special architecture of the Indian culture that was built in the early of the 20th century by the Tamil after they had settled in this area. Beside some famous attractions such as Ben Thanh Market and Saigon Central Post Office, this ancient temple is also an interesting place for you to explore on your off-the-beaten-path tour.

At first, the temple was just a small temple covered with a corrugated iron roof, and only allow people who followed Hindu religion to visit. From 1950 to 1952, the total structure of the temple was rebuilt with a new version by some Indian businessmen living and working in District 1 at that time as a place to practice their belief as well as to have their business always blessed by the goddess.

Many building materials and statues were imported from India, and besides, most of the structure of the temple was constructed by Tamil craftsmen. Throughout the developing process of the city, there is one time when the temple used to be inhabited for several years. In 1990, the government of District 1 took charge and opened the temple again. Nowadays, it is about 100 years old.

The temple is closed at noon from 12 PM to 1 PM for the break. 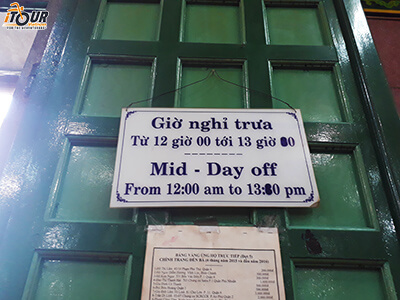 The Myth of Mariamman Goddess

The story was told that Mariamman was Thiruvalluvar’s wife, he was a poor Tamil poet at that time, and their family was forsaken by other people. She was affected by smallpox sickness and had to use a kind of leaves, margosa, to prevent the sores on her body from flies. She somehow recuperated, and people started to believe that she had a magical power to cure smallpox. And the margosa was believed to help people prevent them from smallpox sickness by hanging a small number of margosa leaves in front of their house.

Mariamman is often described as a beautiful woman wearing a red dress with a lot of arms holding different powerful weapons. In some fairy tales and ancient stories, the goddess Mariamman was told to support and bless her people with good weather so that they can work well throughout four seasons on paddy fields; she could also bring happy marriage to the couples. 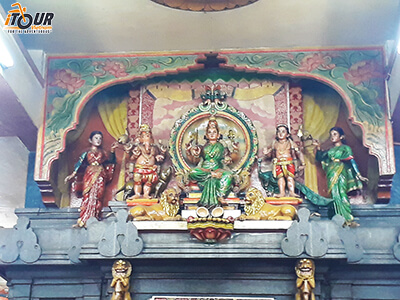 Mariamman Goddess and her sons - Ganesha and Murugan

The ceremony of Mariamman’s birthday is usually celebrated formally for a week in October of Lunar Calendar. This ceremony has become a traditional custom of the Indian and the Indian - Vietnamese living in Ho Chi Minh City who worship and believe in her spirit. Although her story is only known and spread among the Indian community, this annual event attracts not only Indian living and working in the city, but also the Vietnamese. They come to the temple, giving offerings to the goddess Mariamman to pay their respect and make prayers as well. There are also some foreigner tourists visit to see how local people worship in the temple to explore another side of Ho Chi Minh City and religions in Vietnam.

Besides offering flowers and incense to pray for their relatives, friends and themselves, people also often come to the "praying stone wall" when they get here. It is said that when you whisper all of your wishes or concerns to the stone wall, Mariamman Goddess can hear it and give you her blessing. Moreover, this “efficacious stone” was one of the items and materials that were brought from a rural mountainous area in the south of India by Tamil people to build this temple. 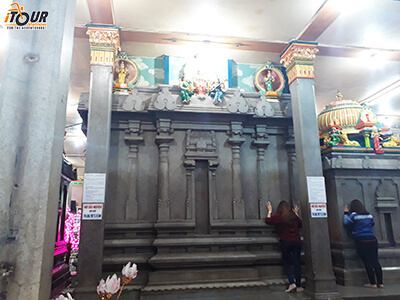 Many years ago, the traditional Indian customs were formally celebrated, and people often took the statue of the goddess Mariamman and the fairy lion Simha Vahanam to parade around some streets in Ho Chi Minh City's center. Nowadays, there are no big celebrations like they used to be, and the lion statue is put in the Mariamman Temple. The lion is an iconic animal of the goddess Mariamman, so visitors of the temple sometimes want to touch the statue of the lion to wish they would be more healthy and lucky. 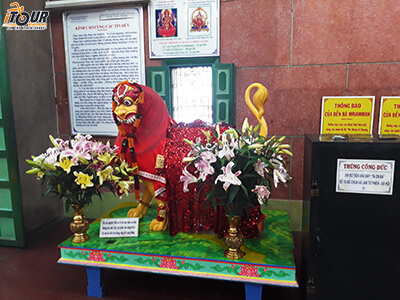 Furthermore, every day, the “consecrating fire” ritual often takes place at 10 AM and 7 PM. Spiritually, it is believed that people who partake in the event and receive fire from the goddess Agni would be blessed and have better luck, so the temple often gets crowded around these times with people who often come to receive the sacred fire.

The Structure of Mariamman Hindu Temple

There are two other Hindu temples in Ho Chi Minh City that locate near the Mariamman Temple and share similar architecture design. These temples display throughout patterns that relate to the Hindu religion. Since Indian people settled in Saigon (old name of Ho Chi Minh City), they built many temples to worship and pay offerings to their goddesses. Some of them were collapsed because they were too old and inhabited. Mariamman Hindu Temple, along with the other two, is a masterpiece in terms of worshiping place which was designed by the Indian community. Looking from the outside, you would instantly recognize the typical Indian cultural structures. 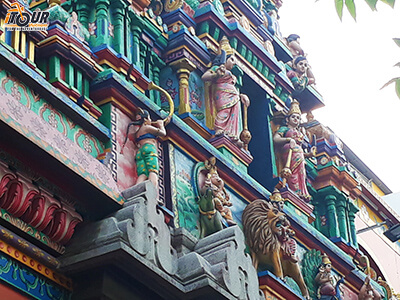 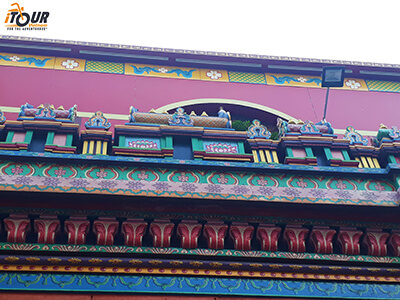 The main hall inside is used to worship the goddess Mariamman, who is also known as the goddess Parvati. Sitting beside her are two deities who are the protectors, Maduraiveeran (on the left) and Pechiamman (on the right). This area is surrounded by the barrier and reserved only for those who come to make offerings and prayers; irregular visitors like sightseers are not allowed to step inside. 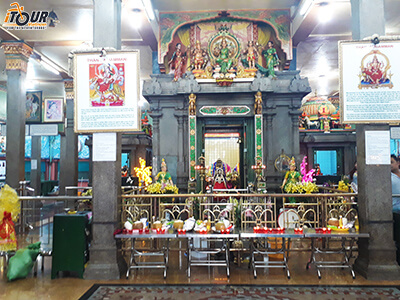 The main altar of Mariamman Goddess

In the middle of the hall, you can kneel or stand to pray, and buy candles, incense, flower, rice, and heating oil to give ritual offerings to the goddess. The other two small altars on the sides are used to worship two deities called “Co" and “Cau" in Vietnamese. These two statues along with Mariamman statue were made of black-painted stone, decorated with many valuable pieces of jewelry. On the top of the altars, there are a lot of colorful and sophisticatedly made statues of other Indian deities like Ganesha and Murugan along with sacred animals. If you have visited the Mariamman Temple in Singapore, you will see that this temple in Ho Chi Minh City bears many resemblances. 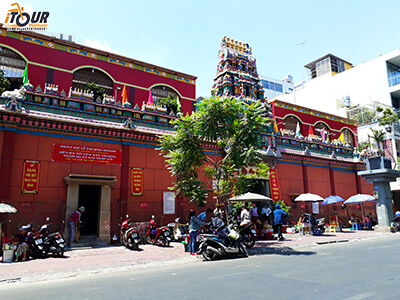 The outside of Mariamman Temple in Ho Chi Minh City 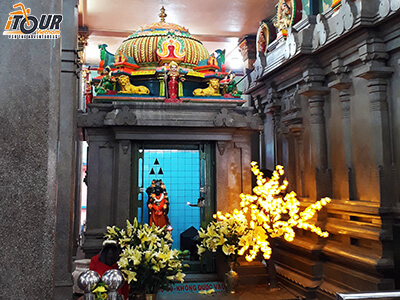 The side altar next to the main altar of Mariamman Goddess 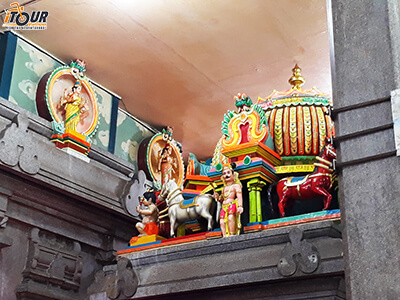 Statues on the altars

The area behind the main altar is a U shape where 18 beautiful statues of the deities sitting on the walls are displayed. Under each statue, their names are sculptures carefully, including Bhuvaneshwari, Nadarajar, Paramsiva, Brahman, Mahavishnu, Kaliamman, Biaramasakthi, Samundi, Thirumagal, Mageswari, Meenakshi, Vaslambigai, Andal, Kamadchiamman, Karumariamman, Sivagami, Parvati và Murugan. Moreover, in the middle of three sides of the U shape, you can see the Trimurti statues, three iconic goddesses of Hindu: Brahma, Vishnu, and Shiva, protecting all sides of the temple. 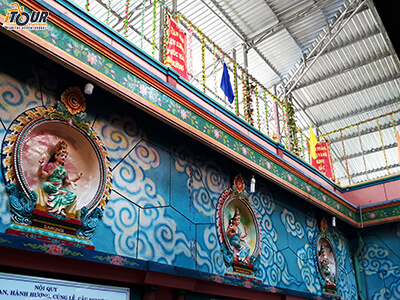 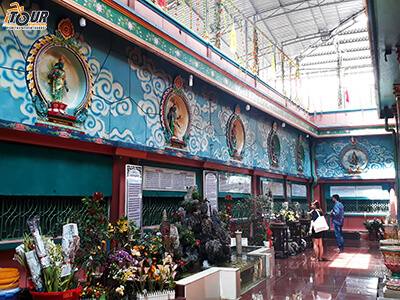 The 18 statues of Hinduism deities

Throughout more than 300 years, Ho Chi Minh City has been known as an interesting city that a large number of emigrants have chosen to settle their new life. Therefore, the culture in Ho Chi Minh City is combined with different cultures of many places across the world. Mariamman Hindu Temple is an instance of this diverse culture, reflecting the Hindu religion and lifestyle of the Indian living in the city.

We highly recommend you travel with a local guide to help you find and spend your time exploring interesting local places in Ho Chi Minh City like this temple. Besides, you can also enjoy different cuisines of many countries and cultures as well as see the locals in their daily life.

Find where to stay in Ho Chi Minh City:

I think I drove by this temple in D1. I have to pay a visit now, it seems pretty interesting

0 Cancel Reply
I think I drove by this temple in D1. I have to pay a visit now, it seems pretty interesting
Cancel Update Comment
First Page Previous Page 1 Next Page Last Page