The moon has a special place in Vietnamese culture. Vietnam has many holidays, official and unofficial ones. Today we will discuss a holiday where the moon is the main theme, that is the Vietnamese Mid-autumn Festival also known as Trung Thu.

The Origin of Vietnamese Mid-Autumn Festival

Nobody knows for sure how and when the Vietnamese Mid-autumn Festival originated from since there is a lack of record. Many believe the Vietnamese Mid-autumn Festival was adapted from China. But regardless of the origin, in any part of the world that celebrates this festival, they all celebrate it on the 15th day of the 8th month of the Lunar Calendar, when the moon shines the brightest. Whenever that day falls on the Gregorian calendar doesn’t matter.

A quick Vietnamese lesson: middle means "trung" and autumn means "thu", that is why we call it Trung Thu. This Mid-autumn festival is such a merry occasion that the Vietnamese have given it the name of Tet Trung Thu to signify that the holiday is significant (Tet as in Tet Holidays). Other names for Tet Trung Thu that announce its purposes are Tet Doan Vien (Reunion Tet) and Tet Thieu Nhi (Children Tet).

Myths and Tales about the Moon

The moon certainly has an air of mysticism to it. So to accomplish Trung Thu, there are myths and legends to go with this moon festival.

The first one is the tale of Hang Nga (Chi Hang). The story is set in a time when there were 10 suns in the sky. Witnessing the calamity the 10 suns caused, a great hero named Hau Nghe, who was a superb archer, shot down 9 suns. Thanks to his feat, Hau Nghe was able to make many friends, gain many admirers, and most importantly marry Hang Nga. On one visit to his friend, Hau Nghe met a Goddess who then gave him an elixir. The elixir promised immortality and access to Heaven.

Reluctant to gain immortality and leave his wife, Hau Nghe left the elixir in Hang Nga’s care. An evil disciple of him knew about this so while Hau Nghe was away, he broke into Hau Nghe's house and threatened Hang Nga. Hang Nga drank the elixir as a last resort. She then gained immortality and flew up the sky. However, Hang Nga's love for her husband was so great that she chose to anchor at the Moon to be closer to him. On days that the full moon is at its brightest, Hau Nghe can see the image of his wife waving at him from the moon. 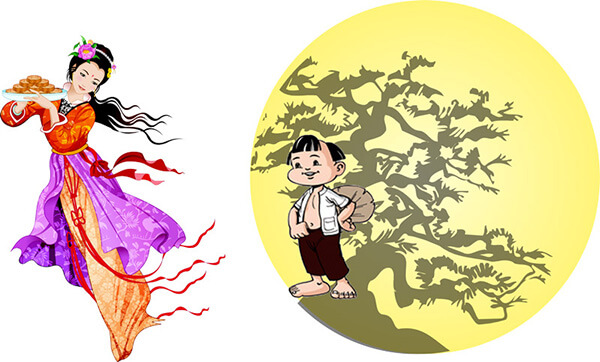 The portrait of Hang Nga and Cuoi

Hang Nga isn’t alone on the Moon though. She is accompanied by two other mythical characters: the Moon Rabbit (Tho Ngoc) - a magical rabbit that is allowed to live on the moon because it offered itself to a God, and Cuoi (Chu Cuoi). The tale of Cuoi is as follows. One day, Cuoi found a magical tree whose leaves can resurrect the dead. Among those he brought back to life are his loyal dog and his beautiful wife.

Then again, the wife was killed by some thugs, disemboweled even. Cuoi had to substitute his wife's gut with the dog's gut, and the dog's gut with mud-kneaded prosthetic one for the magical leaves to work. But after that, the wife became unappreciative. One day she trashed the magical tree, the tree couldn't continue to live in the dirty environment and flew up to the sky. Coming home to see the tree ascending, Cuoi tried to grab hold of the tree’s root and got pulled up to the sky. The tree and Cuoi landed on the Moon, but Cuoi still longed to return home.

Lighting lantern (Ruoc Den) is a part of Trung Thu's traditions and celebrations. Children during this time of the year are gifted lanterns by their parents. At night, the children will roam their neighborhood on foot while showcasing the lit lantern, singing children's' songs. The lanterns can be made with materials like bamboo sticks, colored cellophane paper, normal paper, silk, or wood. The designs vary, but the most common traditional designs are star-shaped (Long Den Ong Sao) or koi fish-shaped (Long Den Ca Chep) or spinning hexagon (Long Den Keo Quan). 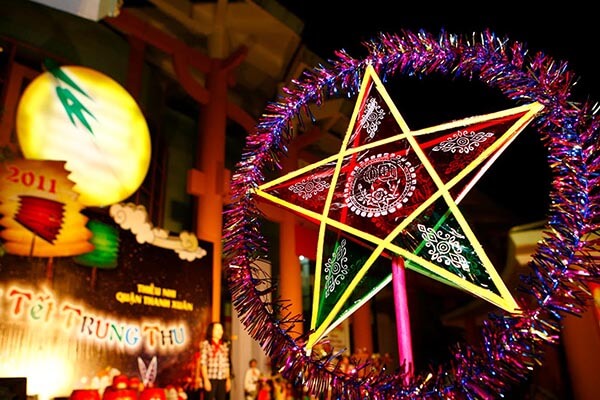 On the Mid-autumn festival, it’s a tradition to do the Lion Dance. Per tradition, performers move from houses to houses dancing. The homeowners will hang money in red envelopes (lucky money) on nearby trees for the "Lion’’ to collect. Nowadays, Lion Dancing crews usually perform at a set venue. 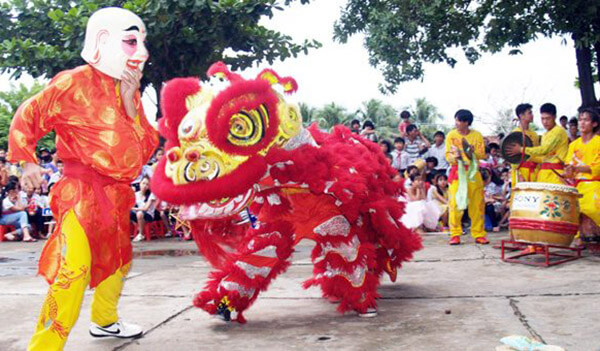 In the performance, there are 2 characters: Ong Dia (the household's guardian) who is portrayed by a mask-wearing crew member with stuffing underneath the costume to look chubby. The character is supposed to be well-rounded, jolly and entertaining. Next is the Lion with a detailed head maneuvered by a dancer in the front. The Lion body, upheld by a second dancer, is made of decorated silk. The performance involves stunts like jumping on high platforms and jumping through obstacles, even through a flaming hoop. This dance is believed to drive out evil and bring good luck and fortune.

The mooncake is a treat on Mid-autumn for both children and adults. Since the Vietnamese Mid-Autumn Festival is an occasion for a reunion, enjoying a piece of moon cake together with the family signifies that reunion. Mooncakes are usually round in shape as a symbol of unity and wholeness, but the square shape for offering and decoration are also widely available. 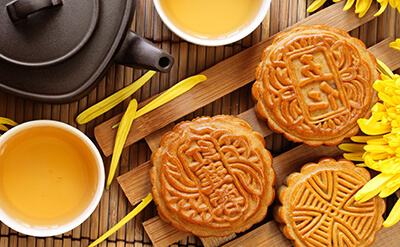 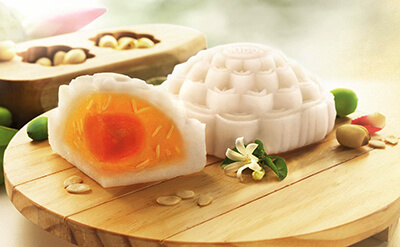 Trung Thu is the Children Tet but many adults, in celebration, take the streets to have fun as well. One of the purposes of the Vietnamese Mid-Autumn Festival we must not miss is moongazing, but we doubt that people gaze at the moon often these days since there are many attractions to see and activities for the young and seniors alike to do on Trung Thu. The streets and businesses during Trung Thu are beautifully decorated so going out to sightsee is a great idea. In Ho Chi Minh City, places like Nguyen Hue Walking Street, District 5 Lantern Street, Starlight Bridge in District 7, various pagodas throughout the country, for example, are filled with light. 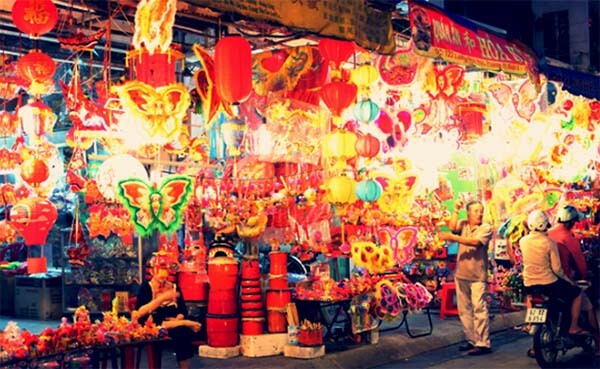 Summing up on How Vietnamese Celebrate Mid-Autumn Festival

If you visit Vietnam during the Mid-autumn festival, you can still enjoy the festival and take part in the celebration. Come and see what Trung Thu has to offer, immerse yourself in the local holiday spirit and have a taste of mooncakes and their variations. Around this time, most hotels in the country will be selling mooncakes. You won’t be disappointed. Just keep in mind that you need to plan your visit timely. After all, the full moon on the 8th month of the Lunar Calendar only happens once per year.

What to know about Vietnamese Tet