How to Spend One Day in Phu Yen Phu Yen may be an unfamiliar name on the tourist map, but this land in Central Vietnam is proving its potential as a flourishing destination of interest. Phu Yen owns pristine beaches and majestic mountains for ultimate relaxation amidst peaceful nature in an off-the-beaten-path area in Vietnam. See below for how you can spend one day in Phu Yen!

An Overview of Phu Yen

Phu Yen Province lies in Central Vietnam, next to Khanh Hoa Province, where Nha Trang City is located. The area's distinguished geographic feature makes Phu Yen's landscape a colorful and magnificent masterpiece, with most of its territory borders the sea, making up 189 kilometers of coastline, while 70 percent of Phu Yen’s land to the West is mountainous.

Most visitors will travel and spend the night in Tuy Hoa - the most developed and populated city in Phu Yen, and the central point where people can travel to adjacent places of interest.

Check prices and reviews of top hotels in Phu Yen:

When to Spend One Day in Phu Yen

Especially during the Vietnamese Tet holiday (January of the Lunar Calendar), you may get the chance to listen to Bai Choi - a type of singing poetry that has been recognized as a national intangible cultural heritage.

Whether you come to Phu Yen during the dry season or the rainy season, packing is always key to surviving the weather. Check with this To-pack List for Vietnam for all your necessities.

How to Get to Phu Yen

You can go to Phu Yen via train, plane, or the sleeper bus:

Flying is the fastest way to get to Phu Yen from either Hanoi or Ho Chi Minh City. For VND 1,000,000 to VND 1,500,000, you’ll be in Phu Yen in about an hour and a half. However, as Phu Yen’s airport is 10 kilometers away from the city center, you should take a taxi to downtown.

Look for discounted tickets to travel to Phu Yen:

One Day in Phu Yen Itinerary

7 AM: Admire Dawn on the Beach

What’s better than welcoming a new day in the peaceful sound of waves and sea breezes gently blowing on your skin. These lesser-known beaches in Vietnam will be an unforgettable part of your trip to Phu Yen

Bai Tuy Hoa: This is the most convenient option as this beach is not far from the city center. That said, Tuy Hoa Beach still has a tranquil vibe to it, all separated from the city’s hustle and bustle.
Google Maps Location Get a panoramic view of Bai Xep from the cliff nearby

Nhan Tower, located on Nhan mountain, was built in the 12th century by the Cham people living in the Ba river delta basin. Nhan Tower has a height of 23.5 meters. Inside it is a small shrine built in the Later Le dynasty, dedicated to Thuong Dinh Chua Thiet A Na Dien Ngoc Phi - a Cham people’s goddess. 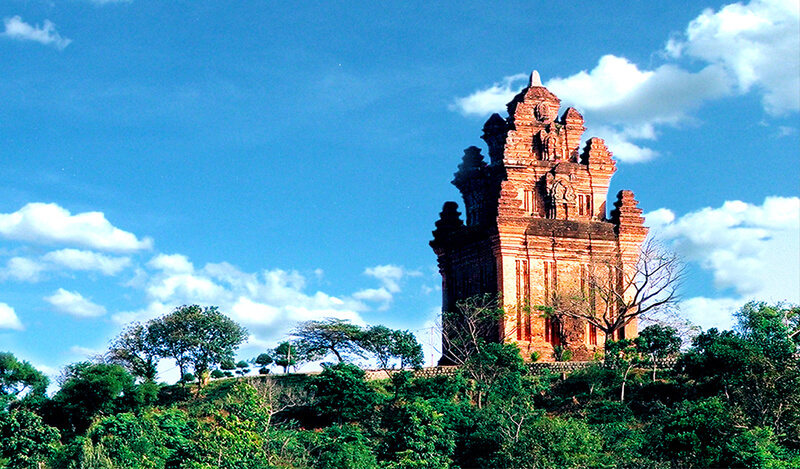 10 AM: Feel the Grandeur of Nature at Ganh Da Dia

Ganh Da Dia (literally “the sea cliff of stone plates”) is probably the most well-known attraction in Phu Yen. The cliff was formed when a volcanic eruption sent hot lava to the sea surface, which morphed the basalt rocks’ shape, transforming them into a stunning black stone arrangement. Ganh Da Dia is a great spot for photography lovers, especially for memorable wedding photos. 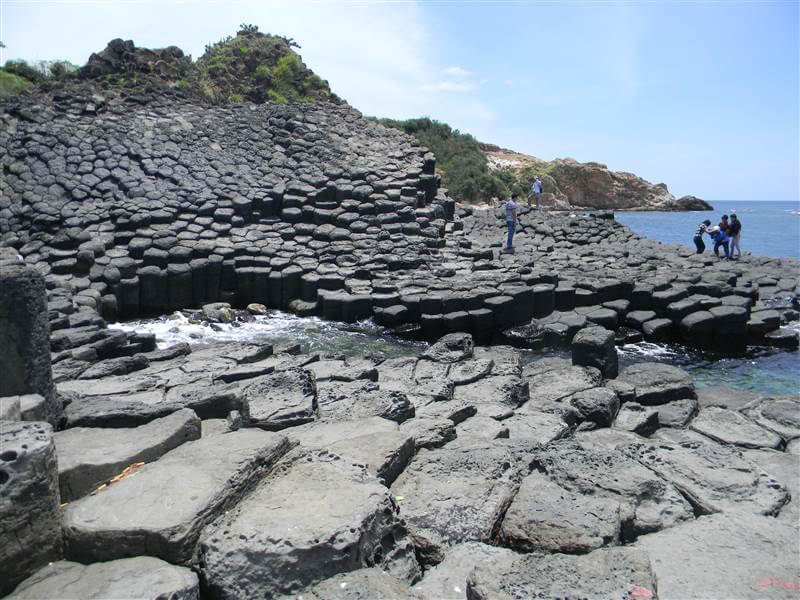 Afternoon: Exploring the Many Surrounding Islands

The second most famed thing of Phu Yen, after Ganh Da Dia, is the small islands surrounding it. Most of these islands are left untouched by commercialized tourism, so peace and rustic beauty are still significantly preserved. Some great activities are water sports, scuba diving, swimming, and of course, enjoying seafood.

Hon Nua: Hon Nua is becoming a well-loved location for Vietnamese youngsters. Located at the foot of Ca Pass, Hon Nua used to be Vietnam and Cham's natural border in the distant past. Now Hon Nua is a great location for those who love pristine beaches and the peacefulness of nature. And don’t forget to visit the red lighthouse for a great photo!
Google Maps Location Hon Nua is often dubbed as “the forgotten paradise"

Hon Yen: What’s special about Hon Yen is that at the beginning of the lunar month, you will have the chance to walk “in the sea”, on a road that only shows itself when the tide goes out. Though isn’t as attractive as in Nha Trang, no one can deny its magical natural charm.
Google Maps Location

Built in 1892, Mang Lang Chruch is the oldest church in Phu Yen and one of Vietnam's most ancient churches. Mang Lang Church follows a distinctly Gothic style with a time-worn beauty that captivates both tourists and locals. Here is also where the first book written in Vietnam’s national language is kept. The exterior of Mang Lang Church

End your day with a fun exploration of Tuy Hoa Night Market. You can find here all types of food in Phu Yen, with the most well-loved, and of course, most delicious, being seafood. Tuy Hoa Night Market is also great for buying souvenirs from your loved ones at home.

Get a travel insurance plan for your trips in Vietnam:

What to Eat in Phu Yen

Treat yourself to the variety of fresh and mouth-watering types of seafood here in Phu Yen. If you’re so used to the usual shrimps and squids, how about trying sea snails?

It’d be a real pity to visit Phu Yen without trying the chicken rice at Tuyet Nhung restaurant. The rice is cooked in chicken broth, giving it a soft, rich texture, and an irresistible aroma. The sauce is also a secret in the stall’s success. The sauce is well-balanced between being sour and sweet, cutting through the richness of the rice.

Final Thoughts on One Day in Phu Yen

Phu Yen’s signatures lean toward being rustic, and most points of interest lie far from each other, so it takes some careful planning to spend one day in Phu Yen to the fullest. If possible, spending more time in Phu Yen is always recommended to take in the area's highlights truly. Comment down below what other off-the-beaten-path destinations you would like to know more about, and check out Vietnam travel guides for insightful information on visiting this beautiful country.