Built in the early 20th century by a French architect, during the time Republic of Vietnam, the building was used as a college for military defense. It was not until 1986 that the Ho Chi Minh Campaign Museum was established, with the purpose of preserving and exhibiting important historical artifacts used during the Ho Chi Minh Campaign (started in the spring of 1975). If you are a history enthusiast who wants a realistic, in-depth lesson to understand more about the Vietnam War, this is the best museum in Ho Chi Minh city to start with.

With a centrally situated location right in the middle of District 1, on the corner of Nguyen Binh Khiem and Le Duan Streets, after visiting the Ho Chi Minh Campaign Museum, you can also have access to other famous attractions near its vicinity. Right on the opposite side of Nguyen Binh Khiem Street, you can immediately spot another famous museum in Ho Chi Minh City, Museum of Vietnam History as well as the green lung of the city, the Saigon Zoo and Botanical Gardens. Just a few blocks down Le Duan Street is the biggest and most ancient Catholic church in Vietnam, the Notre Dame Cathedral.

However, as the museum is still relatively new and recently discovered artifacts are constantly added to expand the collection, the museum may be closed sometimes for maintenance without prior notice.

What to See at the Ho Chi Minh Campaign Museum

The museum has two areas, with a 2,200-square-meter outdoor exhibition to display vehicles used during the Ho Chi Minh Campaign together with a 1,500-square-meter, two-story building to showcase historical items such as clothes, weaponry, pictures, and battle plan.

Right after your entrance at the main gate, you will immediately see the outdoor exhibition area of the Ho Chi Minh Campaign Museum. This large field displays various kinds of military vehicles for both combat and transportation purpose used by the People's Liberation Armed Forces of South Vietnam during the Ho Chi Minh Campaign, including tank, aircraft, jeep, bulldozer, mobile cannon, and missile.

Most of the war machines displayed in this exhibition have a strong historical value attached to them; many of them were used by heroic general and troop in important battles. Some of them even became inspirations in many famous authors' poems. The exhibition also showcases the remaining parts of a broken enemy aircraft that was shot down.

The F.5 Fighter Plane used to bomb the Presidential Palace

There is also a statue to honor the soldiers whose sacrifice greatly contributed to the victory on the 30th of April in 1975.

The indoor area is divided into different sections, and each section exhibits events from crucial phases of the Ho Chi Minh Campaign. The Ho Chi Minh Campaign Museum doesn’t just put historical artifacts on display for visitors, but also includes life-like, realistic figures for a more vivid experience, and detailed map of battle plans to explain the developments and strategy of the campaign.

After entering the main door of the building, to your right is the section dedicated to the Phuoc Long Campaign, a major battle between the Liberation Armed Forces, led by Lieutenant General Du Quoc Dong, against the Republic Military Forces. In the beginning, the purpose of this battle was only to gather intel on the enemy bases, compare the strength of both sides, as well as to test the reaction of international communities, specifically the United States and former President Richard Nixon himself. The success of this campaign sparked a fire of revolution, increasing the soldier's morale leading them to victory in the next campaigns.

Next to the Phuoc Long Campaign section is the door which leads directly to the Tay Nguyen Campaign exhibition.

Also known as Operation 255 among military members, in this vital battle, it was the mistake of a general of Republic Vietnam Army, who deliberately ignored critical information regarding the sighting of People’s Army of Vietnam, that ultimately contributed to their loss, the destruction of II Corps Tactical Zone.

Within ten days, the People Armed Forces in the South of Vietnam gained back control of the Central Highland Area. Many objects showcased in this section like the mechanical saw reflect the difficulty and danger that southern soldiers faced when fighting in the highland forest.

Soldiers trailing through the dangerous forest to deliver supplies

Exiting the room and you will see the Hue - Da Nang Campaign section. The Hue - Da Nang campaign resulted in the demise of the Republic Vietnam Army’s final important line of defense, I Corps Tactical Zone. Their territories were surrounded by the People Army of Vietnam, many units turned to surrender and a large number of weapons, firearms were confiscated.

The last section on the ground floor, next to the exhibition of Hue - Da Nang Campaign, right in the middle of the building, displays the grand picture of the entire Ho Chi Minh Campaign. This is where the museum puts their biggest tourist attraction piece: the giant battle plan model of the whole operation. Impressive not only for its size, the model also lights up to show the developments of the war through different stages, narrated by the museum guide.

Giant model of the battle plan

The museum's most prized possession, however, is the Diary of Ho Chi Minh Campaign, the diary that is recognized as a national treasure. It was handwritten by different secretaries, generals to records important intel like battle strategies, military food supply, and crucial targets.

The Demise of the Republic Vietnam Regime

Going up the stairs to the first floor of the building, on the left side, you will find a room that exhibits the downfall of the Republic Regime of South of Vietnam. Many artifacts showcased here were items left behind or confiscated from high ranking officials of the previous government, including medals, stamps, and personnel records. 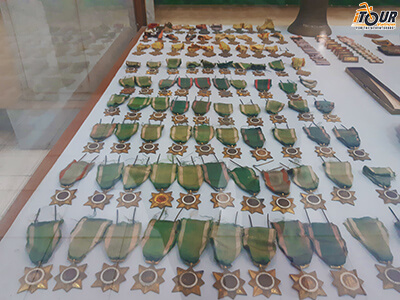 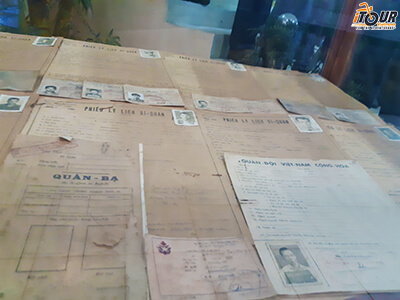 A series of stamps using in the previous regime

There is also human-size figure reenactment of the famous photograph when President Duong Van Minh of Vietnam Republic walked out of his building to surrender unconditionally on the afternoon of April 30th in 1975.

The final room, to the right of the stair on the first floor, displays items from the base of operation of the Ho Chi Minh Campaign with pictures of meetings, important maps of battle strategy, records, and personal clothing. Last but not least, is a figurine reenactment of the historical moment when high ranking officials of the campaign listened to President Duong Van Minh's surrender on the radio, signaling the end of the Vietnam War.

The battle plans in Ho Chi Minh Campaign Museum is evidence for the resilience and intelligence of the People's Liberation Armed Forces of South Vietnam in their victory against both the Americans and the Vietnam Republic Armed Forces in the Vietnam War.

If you are a history enthusiast, don’t miss out on these amazing historical museums around Ho Chi Minh City like the War Remnants Museum or the Museum of Vietnam History in Ho Chi Minh City. A great tour to learn more about the Vietnam War is the half-day tour to Cu Chi Tunnels to get insights into the hardship and battle strategies used.

Get the world-leading travel insurance for your adventures in Ho Chi Minh City: