Dong Thap Province is an incredible land since that associates with ancient civilizations, numerous Vietnamese revolutions during wars and many admirable people. Therefore, you must not miss out the historical destinations in Dong Thap Province when visiting the Mekong Delta.

Xeo Quyt - one of the most famous historical destinations in Dong Thap Province - is now an incredible ecotourism site but in the past, the place played an essential role in the revolutions of South Vietnam. Sitting on a canoe to follow the flow which goes through every corner of Xeo Quyt, you would see both human-made undercover shelters and natural ones created from hundreds of different species of plants. You would also find other facilities of the Vietnamese soldiers such as barracks, meeting room, kitchen, and even deadly traps to defend helicopters and tanks of the enemy. This is one of the must-see destination to learn about the Vietnam War. Military shelters hide behind the dense forest in Xeo Quyt

Besides the historical values, Xeo Quyt is also an ideal place for those who are looking for a chance to immerse with wild nature. The magnificent scenery here would make you speechless with a massive number of animals and trees, the choir of the birds singing, the stream babbling, and the wind whispering. After that, you can enjoy lots of cultural activities which reflect the lifestyle of the local such as catching fish with nets, listening to Southern Vietnam Amateur Music, making household items from water hyacinth, and, especially, trying the modest yet delicious specialties. The green in Xeo Quyt would please your eyes

Guess what you can eat at Xeo Quyt? Grilled snakes!

Go Thap Relics Complex is one of the most significant historical destinations in Dong Thap Province. It is a 320 hectares area including the architectural relics, monuments, cultural sites, and biological zone. 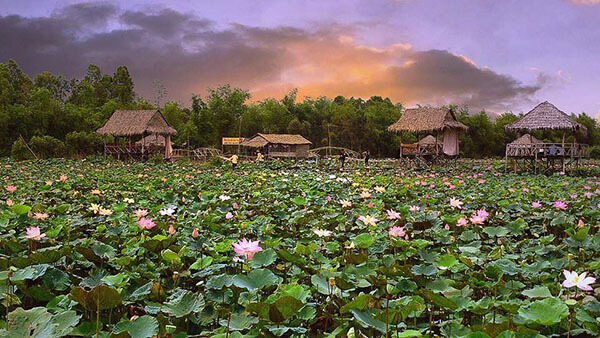 Go Thap Muoi Relics have numerous pieces of evidence of a prosperous civilization of Phu Nam people and Oc Eo culture that existed in this land thousands of years ago. The archeologists have found some remains of several constructions which are said to be massive, as well as several-hundred-year-old trees which have been taken care of until now. The site is not only a place that stores the marks of Phu Nam people, but there are also countless unique belongings and utensils during the recent excavations in Minh Su mound. They all contribute to proving that this land might have been the center of Oc Eo culture and had a good connection with the rest of the world.

The relics in the area of Ba Chua Xu Temple, on the other hand, are the remains of a typical Hindu temple, although what has been found are just some parts of its foundation and remnants of stones. In addition, about a hundred meters from the Relics is Co Tu Tower, a witness of more than two-hundred-year ups and downs of Vietnamese history. The original temple was severely devastated by warfare, so the local people have decided to donate money to build a new one. Temples for Nguyen Tan Kieu and Thien Ho Vo Duy Duong, however, tell the stories about a different part of Vietnamese history. They are the places to worship the two great commanders that sacrificed their whole life to protect the land in the Indochina war.

Nguyen Sinh Sac is the father of Ho Chi Minh, who has the birth name as Nguyen Sinh Cung and is one of the most famous Vietnamese people. He himself was a patriotic Confucian scholar. His ideal and idyllic lifestyle is said to have a large impact on his son who has become a great person in Vietnamese history. He dedicated his whole life to sharing knowledge, taking care of the poor people's health, and spreading patriotism. In the last years of his life, Hoa An Village of Dong Thap Province was where he chose to stay.

To commemorate his merits, the Relic Site was built as a peaceful destination for people to show gratitude toward this incredible yet humble man. All the constructions here from the monument to the statue of Nguyen Sinh Sac are designed in a minimal style and decorated with typical Vietnamese figures like dragon and lotus. In the site, there is also a recreated version of Hoa An Village at which you can learn about the living and working activities of the villagers in the past. On October 28th of the Lunar Calendar (around December of Solar Calendar), the local authority would celebrate the death anniversary of Nguyen Sinh Sac. This event can attract thousands of people to come and memorate. Huynh Thuy Le Ancient House used to be the accommodation of the family of Huynh Thuy Le, the lover and also the inspiration for the French author Marguerite Duras to write the novel L’Amant. The story has become famous and adapted to the screen with the same name. They first met in Vietnam and fell in love deeply with each other, but then departed because of the disapproval of Huynh Cam Thuan - Huynh Thuy Le’s father. The couple reunited in France 50 years later, when they were not as youthful as before, but their serenity love was still undeniable. The house where they spent their short yet unforgettable companionship was actually in Saigon and has no longer existed due to a burndown. The Ancient House, however, still gives out a lot about the male character of the festering love story. Furthermore, it is also a witness of the Vietnamese culture during the French colonial period. The structure of the house is similar to lots of ordinary houses in Southern Vietnam at that time, but the design and decoration are put together from the combination of Chinese impact and Western architecture. While the Chinese signature has a dominant influence in the interior decorators, some lager parts such as the front of the house, windows, and ceiling can be seen as the imitation of the French style. Appearing in numerous scenes of the L’Amant film, the Ancient House has contributed to the completion of the film’s mission: become a must-see thing for those who love to know about the Indochina war.

Get discounted tickets to travel to Dong Thap:

Depending on your interest, you can choose a suitable historical destination in Dong Thap Province. If you want to know about the Indochina War, you can consider visiting Xeo Quyt, Go Thap Relics Complex and Huynh Thuy Le Ancient House. Go Thap Relics Complex also offers considerable knowledge about an ancient civilization of Phu Nam, and the Ancient House is where you can get to know a passionate yet nostalgic love story. And in case you want to learn more about Ho Chi Minh, you can visit the relic site of his father - Nguyen Sinh Sac.

Get your travel insurance plan to explore Vietnam:

A mekong tour is so refreshing compared to the big cities