Traveling to Ho Chi Minh City, a former French colony, you will have the opportunity to discover beautiful destinations and unique cuisines of the friendly Vietnamese. This city is rapidly developing with many hotels and tourism services to accommodate international visitors. In this edition of our Vietnam travel guide, specifically, you can find a list of the French Quarter hotels in Ho Chi Minh City worthy of a mention.

History of the French Quarter in Ho Chi Minh City

On October 3rd, 1865, Rear Admiral Pierre Rose issued a decree and set forth a total area of Saigon of about 3 kilometers squared, nearly half of that of District 1 today. It was enclosed by the Saigon River, Nguyen Thai Hoc Street, Nguyen Thi Minh Khai Street, and the Ben Nghe Canal. The French mainly built most of the buildings in the region, such as the Ho Chi Minh City Museum, the former Independence Palace named Norodom Palace, the Municipal Hall, the National Bank, the Notre Dame Cathedral, and the Ben Thanh Market.

The French government in the South of Vietnam had chosen Saigon to present to the world and the French's state of “Pearl of the Orient”. Today, there remains a few streets with all the former luxury like the Catinat (Dong Khoi Street), Bonnard (Le Loi Street), Charner (Nguyen Hue Street), De la Somme (Ham Nghi Street), and Norodom (Le Duan Street). 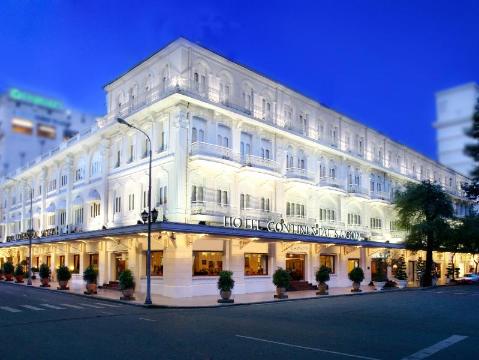 The Continental Hotel is a well-known historical hotel in Ho Chi Minh City, located at 132 - 134 Dong Khoi Street, one of the centrally located streets in Ho Chi Minh City. It is about a 1-minute walk to the Parkson Plaza behind and a breeze to the Saigon Opera House locating right adjacent to it. This French quarter hotel was built in 1878 and officially opened in 1880 by Pierre Cazeau, a manufacturer of building materials and furniture, to welcome visitors from France to Saigon. 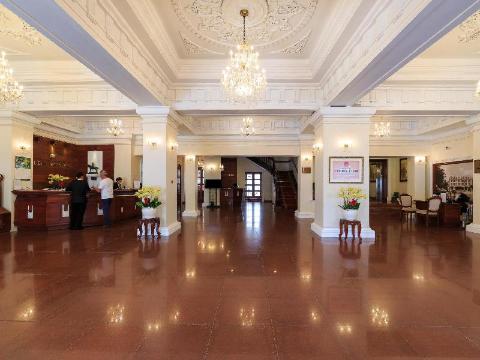 The Le Bourgeois Restaurant generally serves European dishes, while the Continental Palace Restaurant will suit you if you want to have a taste of Vietnamese cuisines. In order to adapt various preferences of beverages to clients, the hotel also opens La Dolce Vita Bar for guests to taste Vietnamese coffee and drinks.

In addition to the 2 restaurants, the hotel also has a bar, and a health club with other amenities including a sauna, and spa services. The service of Hotel Continental Saigon is of high quality when they serve complimentary buffet breakfasts with the room bookings, as well as provide free Wi-Fi. There are 24-hours room service, LCD TVs, minibars, and coffee makers. 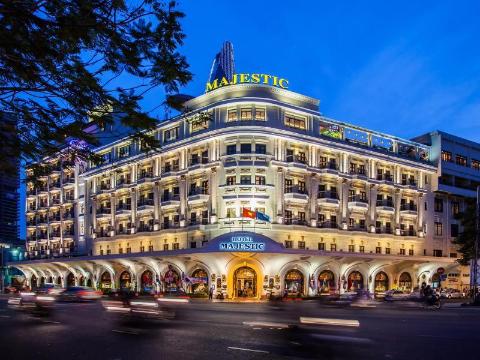 Another famous hotel in the old French Quarter is the Majestic Hotel established in 1925 by Hua Bon Hoa, the richest man in Saigon at that time. The hotel is situated right on the corner of Dong Khoi Street and Tong Duc Thang Street.

This hotel has a boutique-style, offering both traditional and modern facilities such as an outdoor pool, a restaurant, a rooftop bar, a health club, and a gym. Wi-Fi is available and free in all areas of the hotel. All rooms are equipped with necessities like wooden furnishings, antique phones, air-conditioning, personal safety deposit box, and private colonial-style marble bathrooms. Majestic Hotel also has a casino with staff who speak both French and English. 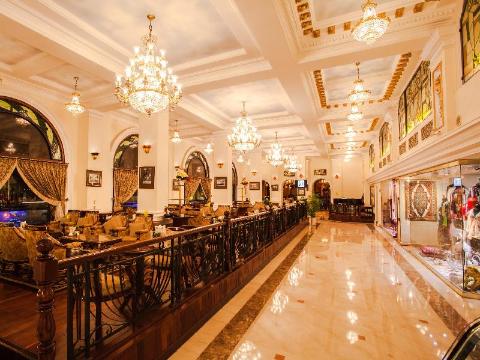 At a centrally located position in Ho Chi Minh City and overlooking the Saigon River, the Majestic Hotel attracts visitors with its positive service ratings and the convenience of the attractions nearby. The hotel is 500 meters from the Saigon Opera House and the Municipal Hall overlooking the Nguyen Hue Walking Street.

The Grand Hotel Saigon is a 5-start hotel located at 8 Dong Khoi, District 1. The hotel is conveniently located in the city center, 8 km from Tan Son Nhat International Airport (SGN), 1 km from the Central Post Office, Notre Dame Cathedral, and the Reunification Palace.

Although this hotel has undergone many changes, it still retains the French architectural style for nearly a century. Built in 1930, the Grand Hotel Saigon is one of the oldest hotels in Ho Chi Minh City. The guests' rooms are decorated with both new and old style.

Available at the hotel, you can enjoy tasty Asian-European cuisines prepared by professional chefs and a drink at the cafe overlooking the Saigon River. You can also relax at the on-site sauna, enjoy a massage or sunbathe at the outdoor pool with loungers set in the garden courtyard. 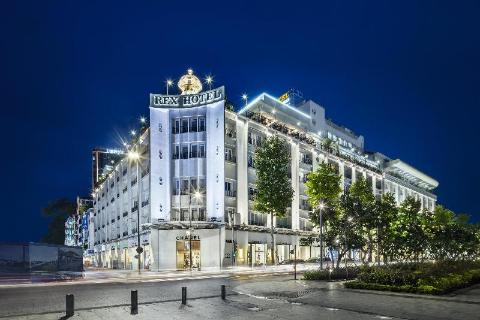 Rex Hotel was built in 1927 by a French businessman named Bainier. This building was originally a garage and car showroom. From 1959 to 1975, it was renovated to become the Rex Complex hotel.

Nowadays, the Rex Hotel in Ho Chi Minh City is a 5-star hotel with 5 floors and over 200 rooms, located right on the Nguyen Hue Walking Street. The architecture of the hotel is the mix of classical elegance and oriental charm, creating a unique elegance. 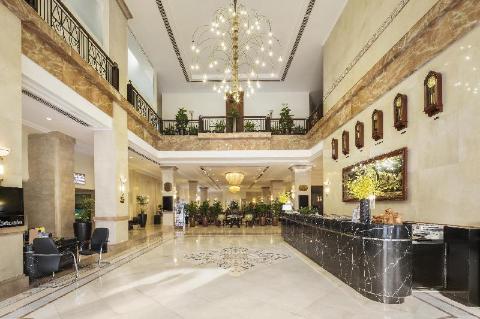 Each room is decorated in a Vietnamese style along with internet, TV, tea/coffee makers. You can unwind by playing tennis, go for a swim at one of the two rooftop pools, or exercise at the gym. If you love having a cocktail or liquor out in the open air, the Rooftop Garden Restaurant at the Rex Hotel would be a good choice that comes with occasional live music. 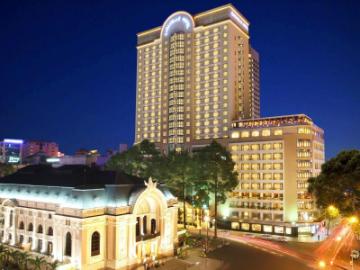 The original location of the Caravelle Hotel during the French colonial period was the Grand Cafe de la Terrasse, one of Saigon's first and most famous cafes in the late 19th century. The construction started in 1957 and was opened on Christmas Eve in 1959. In the wartime, Caravelle was also a gathering place for international veteran journalists at the 10th-floor terrace as it could see the whole view of Saigon at that time. American television companies CBS and ABC, as well as the New York Times, all had their offices here. Caravella was named after the jetliner of a French Airline because the Airline was one of the investors of the hotel. 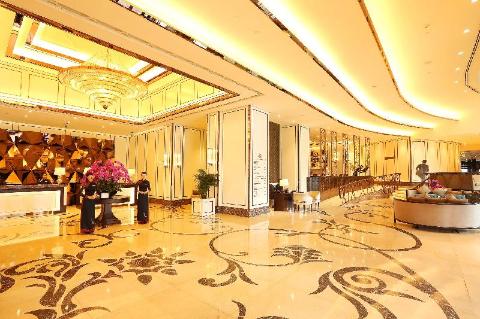 Located at 19 - 23 Lam Son Square, District 1, Caravelle Saigon Hotel is a 5-star hotel with French and Vietnamese architecture, right next to the Saigon Opera House. There are an outdoor pool and a restaurant located in the open air. The hotel’s rooms are sophisticatedly decorated in soothing neutral tones and a view of the city or the Saigon River. The air-conditioned rooms come with crystal walls and floor. All rooms are equipped with modern amenities such as a flat-screen TV and a 24-hour room service.

Note: from 9th June 2018 until the end of 2019 from 7 AM to 11 PM, the meeting space and guest rooms of Caravelle are under renovation. And thus, some area of the hotel might be affected by the noise and light disturbances.

Staying at the French Quarter hotels in Ho Chi Minh City, you can enjoy beautiful views and visit the nearby attractions on foot. And you will get to experience a combination of Eastern and Western cultures right in Vietnam.

If you have any plans to sign up on a Ho Chi Minh City tour, see our highly recommended private motorbike tours. i Tour Vietnam offers both day and night tours with the professional local guide.

Get your Vietnam Travel Insurance below: