Ha Giang is one of the most breathtaking places in northern Vietnam, arguably famous for its majestic landscapes and winding mountain roads. 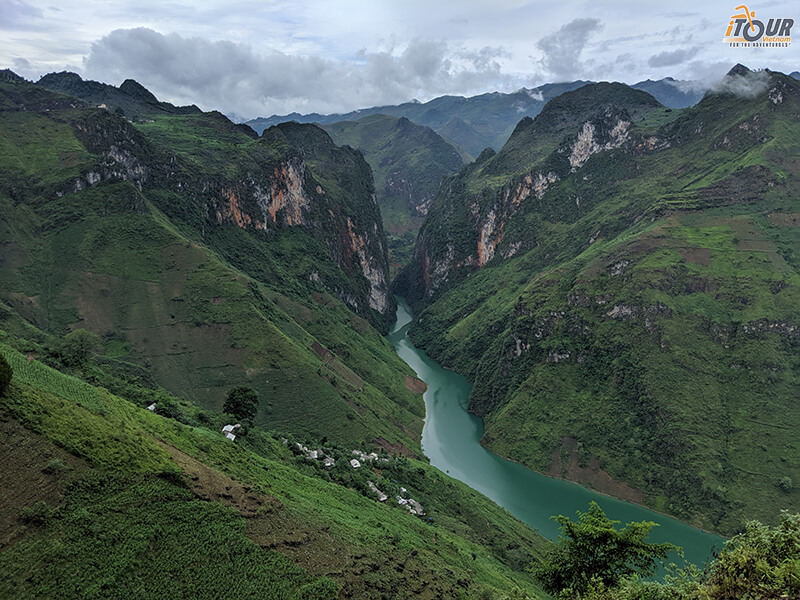 December/January is the coldest time in the mountainous districts at Ha Giang. August is the hottest time of the year.

Ha Giang is 320 km from Hanoi, 160 km from Dong Van, and 20 km from Thanh Thuy Border Gate (China). Travelers can book a tour to Ha Giang, take a public bus, transfer by taxi, or drive the motorbike (adventurous).

Most people will travel from Hanoi to Ha Giang.

Look for cheap tickets below:

Most travel agents or hotels can arrange car-with-driver rental services.

Alternatively, there are many tour options from Hanoi to Ha Giang, ranging from a few days to a full week.

Due to the 320 km distance from Hanoi, most visitors will take the bus, group tours, or drive their own motorbikes instead of the taxi. In Ha Giang City, these taxi brands are available: Truong Xuan & Son Dan.

Most people will travel from Hanoi to Ha Giang. Rentals are available at hotels, at Hanoi's Old Quarter, and along the backpacker streets: Ta Hien, Hang Bac, Ngo Huyen, Hang Be, Cau Go, Luong Ngoc Quyen, etc. Motorbike taxis are also available via the Grab app when in Ha Giang City.

See our recommended places on where to stay in Ha Giang or look for your favorite accommodations below:

This breathtaking 20 km Ma Pi Leng mountain pass stretches on Highway 4C connecting Dong Van and Meo Vac towns. It is located at an altitude of 1,500 m and said to be constructed by ethnic minorities in the 1960s. 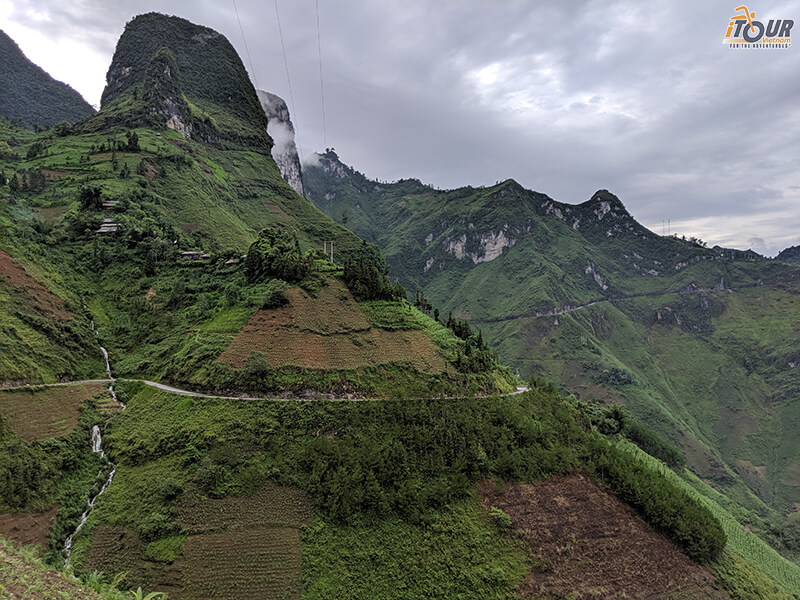 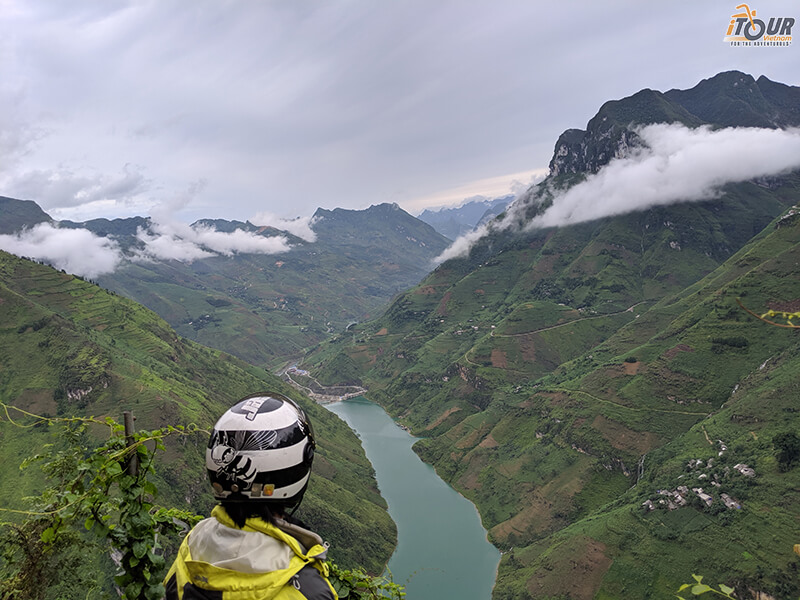 Have you tried the boat on the Nho Que River in Ha Giang Province?
Video by NexShop

Also known as Tham Ma Slope, it is located in Dong Van District and stretches 5 km from Van Chai to Lung Thau. 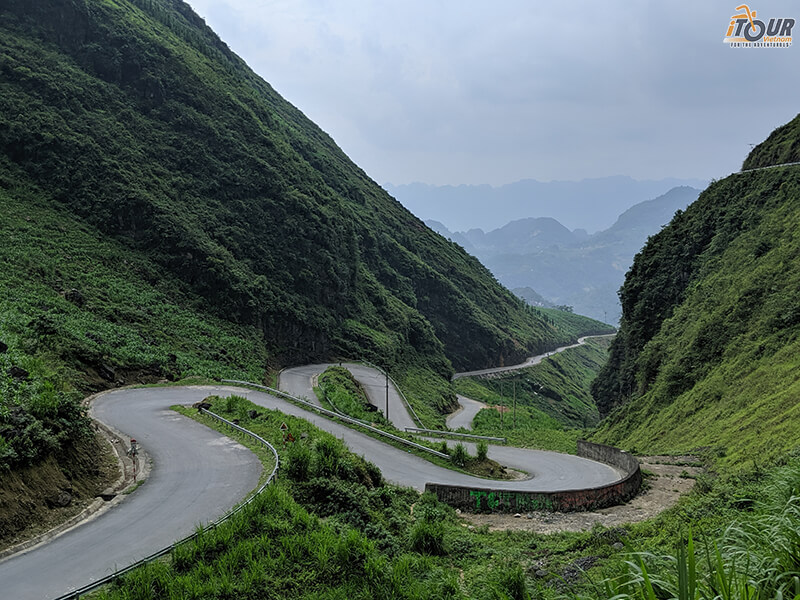 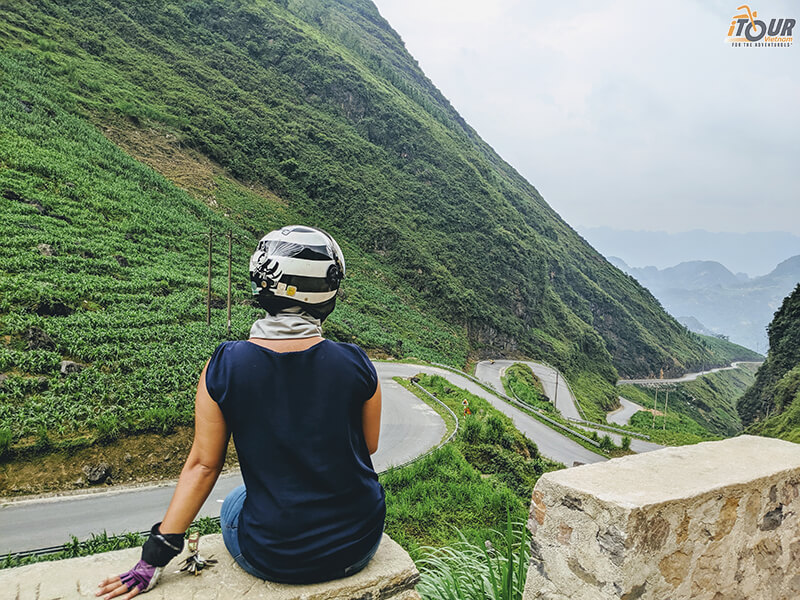 At this viewpoint, travelers can admire the natural masterpiece called the Twin Mountain which lies in the middle of the green fields. There is also a cafe nearby where all motorbikes stop for a break. 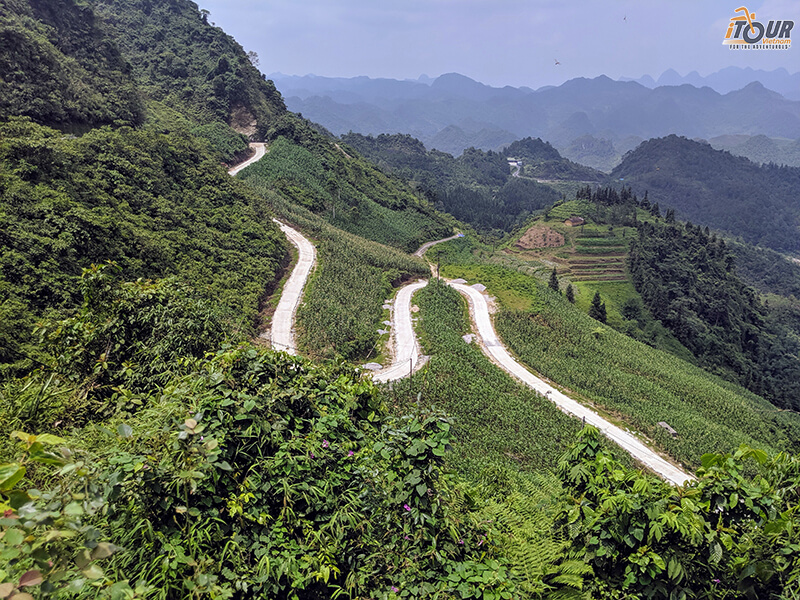 Dong Van Plateau is the prettiest in the spring with views of rugged rocks and mountain peaks colored in bright colors. From the weather changes and geodiversity, the karst evolution created rock-like gardens and forests covering an entirety of 4 mountainous districts: Quan Ba, Yen Minh, Meo Vac, and Dong Van. This striking scenery is on an altitude of 1,000 m - 1,600 m above sea level covering 2,356 km2. 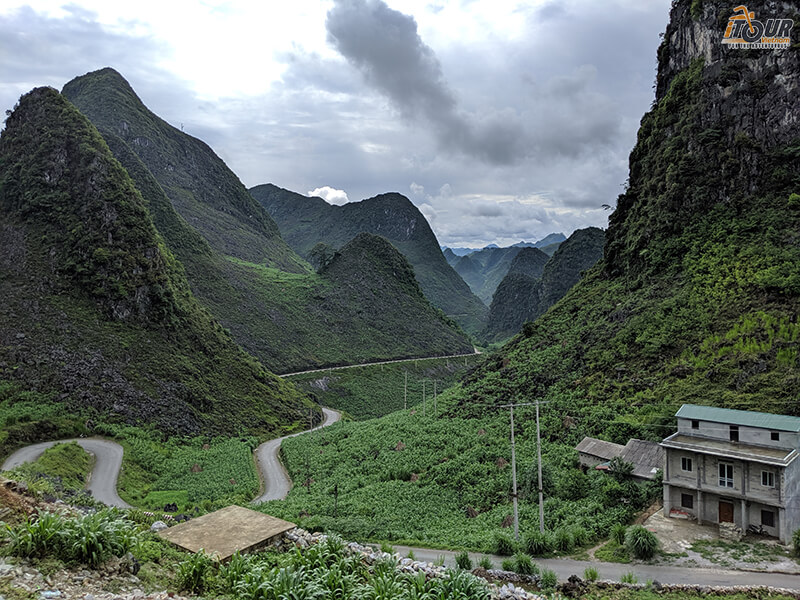 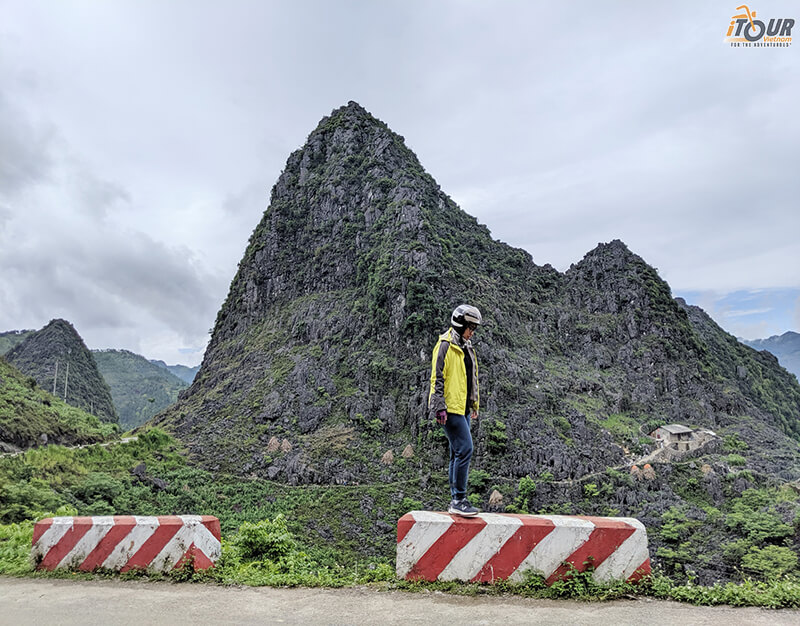 Lung Cu Commune is where the northernmost point of Vietnam located. It is 170 km from Ha Giang City and 20 km from Dong Van Town.

The flag tower is built on top of a 300 m mountain called Rong (Dragon) Mountain, which is 1,600 m above the sea level. At the foot of the mountain are 2 semi-circular lakes said to be the eyes of the dragon. The flag on the tower has an area of 54m2, signifying the unity of the 54 ethnic groups in Vietnam. From the parking lot, visitors will need to pay an entrance fee and then take the steps to the top of the mountain to reach the tower. 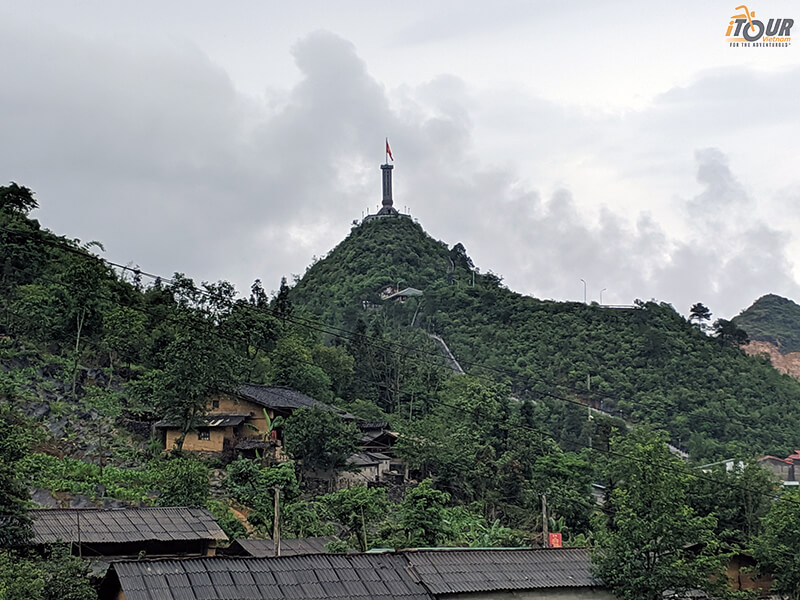 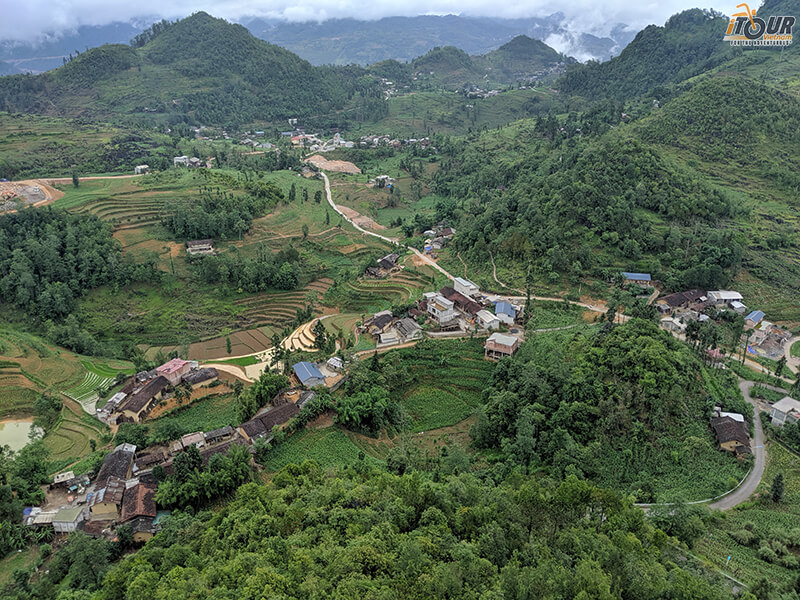 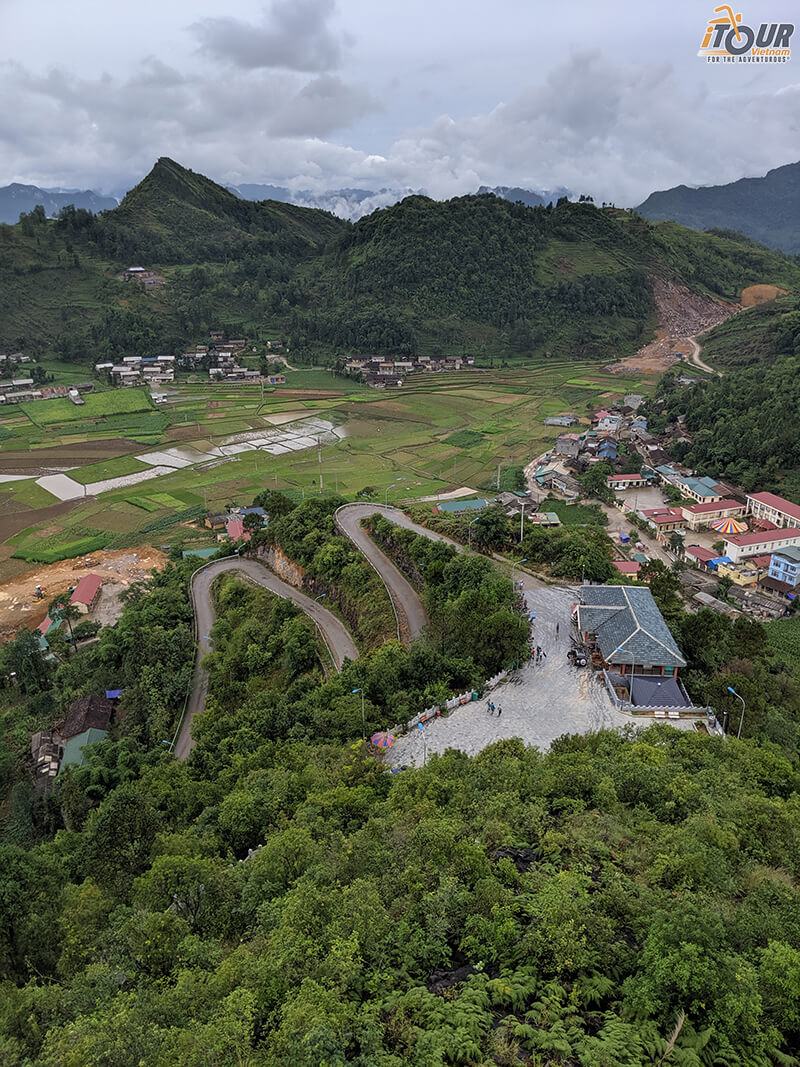 This residence is not large, but its original architecture is unique in the highlands. It includes 10 houses built of po-mu (a valuable wood), 6 of them facing the same direction and the other 4 facing the other directions. The main house faces the entrance with outer carved-stone walls being 60 cm thick and 2 m high, in between the walls is a 50 m wide land.

Late September and October is the best time to witness the glittering layers of golden rice on the Tay Con Linh Moutain at Hoang Su Phi District. The beauty of the rice paddy fields run along Provincial Road 177 from Vinh Quang Town to Viet Quang Town.

Tien Cave is 2 km from Ha Giang City with a very beautiful stream inside. Tien means fairy and the cave got its name from the local legend that says fairies used to come here to bathe during the Tet holidays.

Lung Cam Village is home to 3 ethnic groups: Mong, Lo Lo, and Han. 85% are Mongs. Apart from ancient houses preserved intact, traditional festivals, folk songs, dances, and instruments are culturally conserved. The materials to build houses were produced right at Lung Cam, from soil to walls and rock fences. The moss-covered layer on the roofs of the houses is around 100 years old. At this unique cultural identity, it was the scenery background of the film "Story of Pao" (view map) that won the "Golden Kite" of the Vietnam Cinema Association. 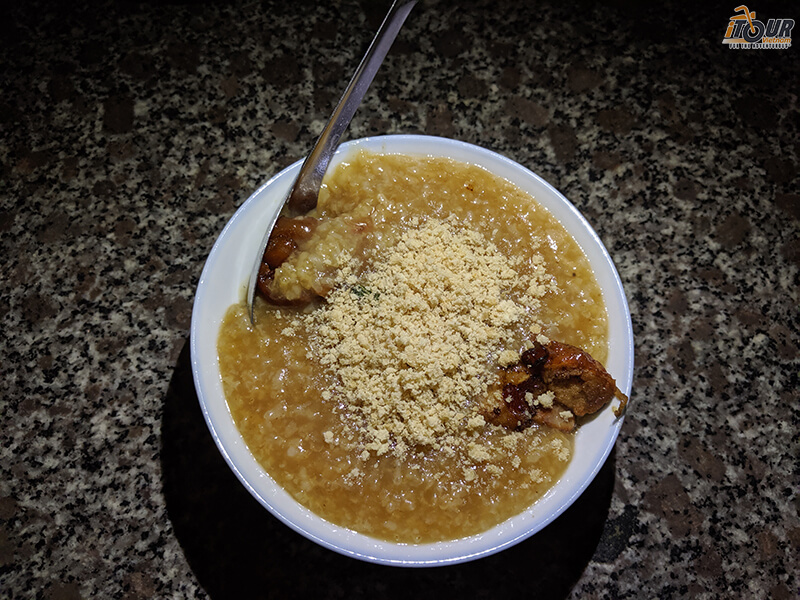 When in Ha Giang City from December to February, visitors should not miss the Bac Quang oranges from Bac Quang District.

At Dong Van Karst Plateau, visitors can take part in the highland kermises every Sundays at Dong Van Market and Meo Vac Market.

Spring Festival is usually held for 3 to 5 days following Tet (New Year) by the Mong and Dao ethnic groups. Activities and festivities such as arrow shooting, singing, and drinking local wine take place to celebrate the past year and pray for good weather (for harvest and yield) in the coming year.

Lo Lo People's New House Celebration is held for 2 days and 2 nights when a new house is built by the Lo Lo people. All villagers sing and dance with flutes and pan-pipes playing to celebrate.

Nhay Lua Festival is unique to the Pa Then ethnic group that happens at the end of the 12th lunar month, after harvest.

Love Market of Khau Vai happens once a year on the 27th day of the 3rd lunar month in Meo Vac District. According to the ethnic story, a young couple from different tribes fell in love, but the girl was too beautiful and her tribe felt she was too good for the man from another tribe. Violent conflicts and aggressive fights arose between the two tribes, so the lovers decided to say goodbye. However, they made a promise to meet once a year on that day at Khau Vai. Since then, Khau Vai became a meeting place for all those in love, hence the name love market.

Sign up for a travel insurance plan to travel to Ha Giang: