The Dragon Bridge on Han River in Da Nang

Da Nang City is a coastal city in Central Vietnam.

With a generally warm and temperate climate, the summer has a good amount of rainfall with precipitation of about 2,153 mm (84.76 inches) per year. Most of the precipitation is in October.

Look for discounted travel tickets below:

At the Da Nang Bus Station, there are many daily bus routes connecting other cities in Vietnam. Plus, international buses to Laos (Vientiane, Thakhet, Savan, Pac Se) depart daily at 8 AM.

At Da Nang City, motorbikes for rent are available for around VND 150,000 per day at the hotels or hostels.

Taxis are available almost everywhere in the city. Some of the taxi brands are Mai Linh, Vinasun, Tien Sa, etc.

There are boat tours of the Han River. Contact to Tien Sa Boat or Song Han Cruise

Get an insurance plan before your travel:

Spend a night on a boat, cruise, or Hotel options: 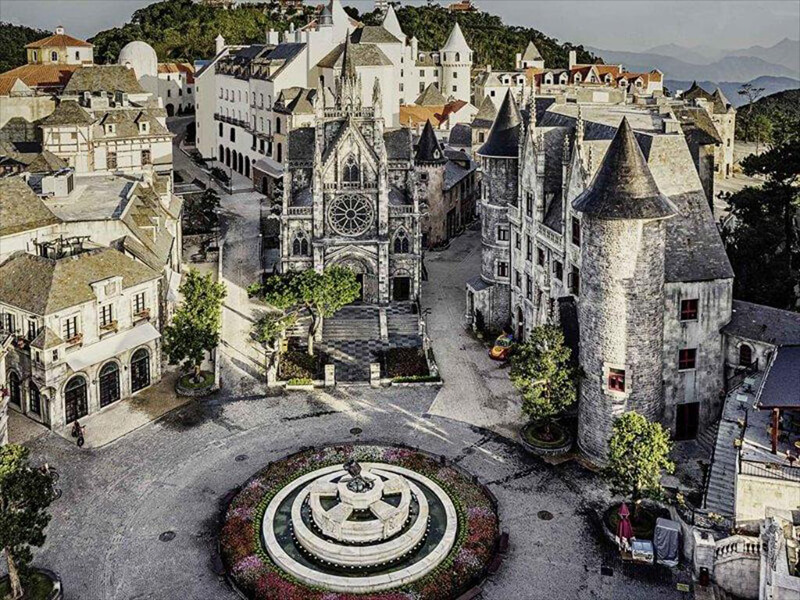 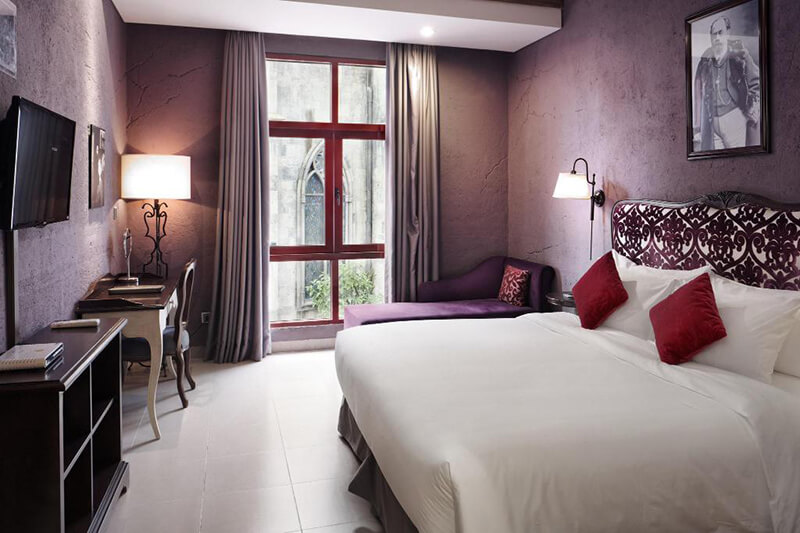 Or search for the best hotels in Da Nang here:

The Museum of Cham Sculpture was built in 1915 under the sponsorship of the French school for Far Eastern Studies in Vietnam. It was expanded in 1936 and opened to the general public in 1939. The collection at the museum exhibits 300 original sandstone sculptures and baked clay dating from the late 7th century to the early 15th century.

Hai Van Mountain Pass is situated on the road between Hue and Da Nang. From here, there is a magnificent view of the sea, the clouds, and the tunnel, which is the longest tunnel road in Southeast Asia measuring 6.28 km.

The Marble Mountains, also called Ngu Hanh Son, is located 8 km southeast of Da Nang. In the early 19th century, King Minh Mang named the 5 mountains according to the 5 elements of nature: Metal (Kim Son), Wood (Moc Son), Fire (Hoa Son), Earth (Tho Son), and Water (Thuy Son). Of the 5 mountains, Thuy Son is the largest and considered the most beautiful.

Nestled in the Marble Mountains system, Huyen Khong Cave is one of the most ancient and unique worshipping temples in Vietnam. At certain times of the day, sunlight will sneak through the cave's craters, creating a magnificent natural light show for visitors to witness.

The ancient village situates on the foot of the Marble Mountains. Here you can witness first hand how the handmade marble crafts come to life and buy home quality yet affordable souvenirs such as cooking utensils, decorative statues, and jewelry.

Situated on the Chua Mountain, Ba Na Hills used to be the retreat sanctuary for French colonists in1919 and now it is an internationally famed resort welcoming visitors from all over the world to the wonders of Da Nang.

Fees for a round-trip ticket: VND 700,000/adult and VND 550,000/kid (inclusive per ticket: admission, some games in Fantasy Park, and a funicular train to Debay Cellar and Le Jardin D'Amour 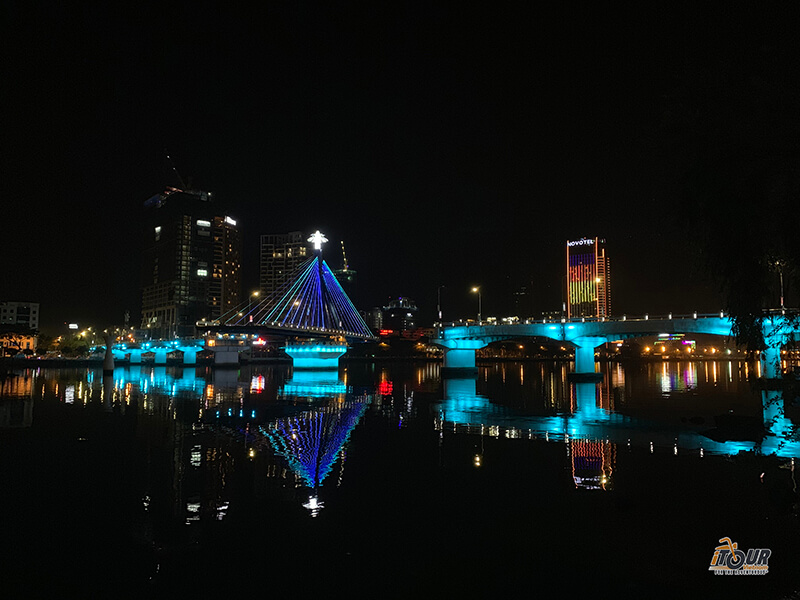 Popularly known as a favorable place for a relaxing vacation, Son Tra Peninsula is located at the entrance of Da Nang Harbor. Its geographic location is ideal for protecting the city against winds and storms making up of yellow sand beaches, peaks, and mountains. The natural ecological region is 693 m above sea level. From the top of Son Tra Peninsula, there is a magnificent panoramic view of Da Nang City, the Marble Mountains, and Ba Na Mountains.

At the foot of Son Tra Mountain is a seacoast of 5 km long with these beaches: Bai Bac, Bai Xep, Bai But, and Tien Sa. Among these, Tien Sa, which means descending fairy, is considered the most beautiful.

In Bai But, there is the highest statue of Avalokitesvara in Vietnam, located at Linh Ung Son Tra Pagoda (view map).

Linh Ung Son Tra Pagoda, also called Linh Ung Bai But Pagoda, covers an area of 20 hectares halfway up the mountain at Son Tra. From the gate of the pagoda, visitors are rewarded with a panoramic view of Da Nang's beach and the Marble Mountains. The pagoda complex was built in 2004 and inaugurated in 2010. The complex consists of a sanctum, place of worship, preaching hall, library, the Arhat Garden with 18 white monolithic stone Arhat statues, the 17-floor tower with a different Buddha statue placed on each floor, etc. The highlight is a 67 m high Avalokitesvara Bodhisattva statue standing on top of a 35 m diameter lotus-shaped platform.

Behind the Linh Ung Pagoda is the centuries-old Tang Chon Cave. Inside the cave are small archaic shrines worshipping local gods and the Buddha. Cham statues and relics can also be found here.

Tam Thai Pagoda was once considered as the national pagoda under Minh Mang King's reign, where his sister, Princess Ngoc Lan also went to to study Buddhism. The pagoda was also the center for important meetings during the many patriotic movements before and during the colonial period.

Built in 1927, Pho Da Pagoda doesn't only serve as a religious worship temple but also a school for Buddhism study in Vietnam.

My Khe Beach is proudly crowned as one of the most stunning beaches in Vietnam, and it has been a favorite stop for retreat ever since the American troops have discovered the place. There are ample hotels and resorts in the vicinity with luxury services for ultimate relaxation. If you're into adventures, try the various watersports at the beach which include surfing, stand-up paddling, water-skiing, and so much more.

Other Attractions in Da Nang Province:

Asia Park is a multi-purpose amusement premise that embodies Asia's vibrant cultures. There are 3 parts of the park: Amusement Park, Cultural Park, and Central Zone.

Eating and Drinking in Da Nang: Quang Noodles is the signature noodle soup in Central Vietnam, and Da Nang's recipes bring a distinctive taste to the dish 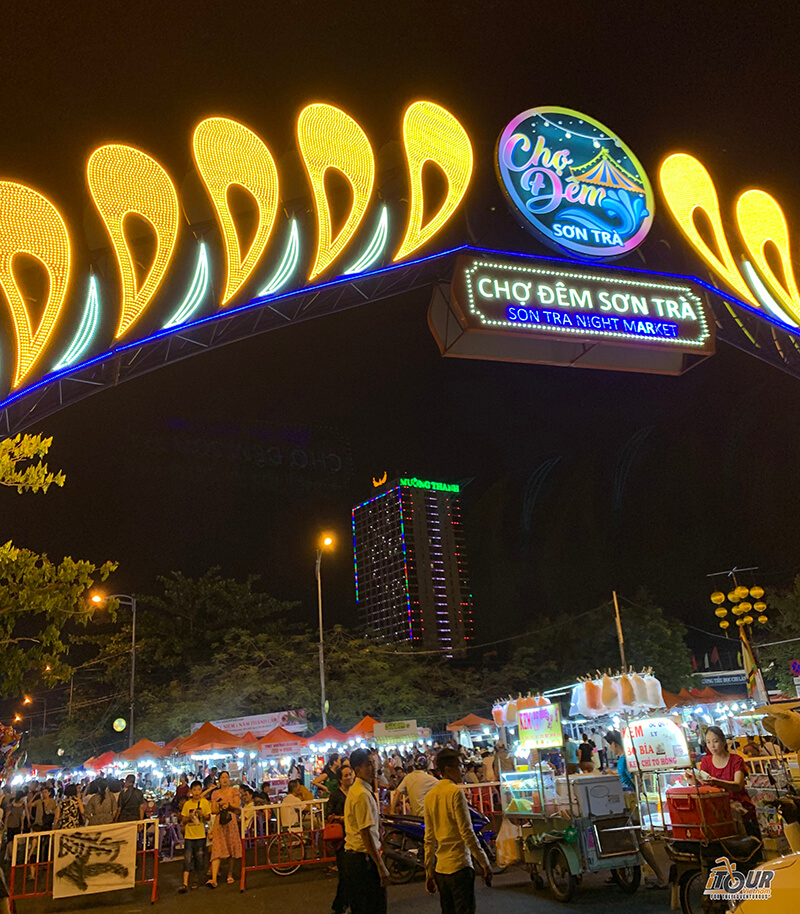 Da Nang International Fireworks Festival happens annually around mid-April by the bank of the Han River, near Asia Park. The main highlight is the fireworks competition with participants from international countries. Other festival activities include auxiliary, parachuting, art, and cuisines.

Quan Am (Avalokitesvara) Festival is from the 18th - 20th days of the 2nd lunar month and consists of 2 parts: the festival and the religious ceremony. Activities at the festival include camping, boat race, evening lantern festival, art performances, and other cultural activities.

Ca Ong (Whale) Festival happens every year for 2 days in the middle of the 3rd lunar month at the coastal villages of Man Thai, Tho Quang, Thanh Loc Dan, etc. As one of the most important festivals of the fishermen, it is an act of thanking the whales, linking the prosperity of the fishing villages and the peaceful life of the fishermen.