Famous Vietnam Festivals across The Country In Vietnam, festivals are the times when families gather, worship our ancestors or gods, and pray for blessings. They come with several ceremonial rituals and delightful activities.

Here are some famous Vietnam festivals that are celebrated by most of the local people.

Tet Nguyen Dan - also know as Tet - is celebrated by the majority of Vietnamese people. Therefore, it is inevitably the most noticeable among the famous Vietnam festivals. Besides using the Solar Calendar like Western people, Vietnam and other Asian countries also count days basing on the Lunar Calendar. Consequently, the Vietnamese welcome another New Year aside from that in the Solar Calendar with a much more significant celebration. "Tet" is originally derived from an original Chinese word called "Tiet" meaning the transitioning time of the seasons. For each and every Vietnamese person, Tet would have a different meaning. To old people, it is time for them to meet their children and grandchildren who have been busy working or studying all year. To grown-ups, it is when they take some days off and feel less guilty to indulge themselves in expensive treats. And to kids, they are usually the ones who love Tet the most since they get a long break from school and receive some lucky money from the older. The whole family would gather together, eat traditional food such as Banh Chung - one of the many must-try Sticky Rice Cake in Vietnam, pork stewed with bamboo shoot, and more. If you visit Vietnam around late January - mid-February, you can undoubtedly feel Tet in the air. 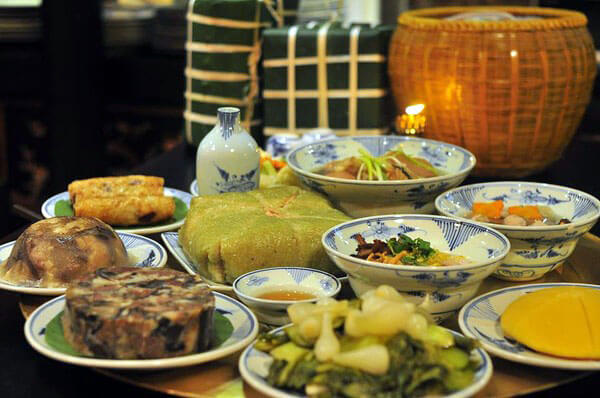 Read more in What to Expect from Vietnamese Tet.

With approximately 4 millions of people coming to celebrate, Hung Temple Festival is the second largest festival in Vietnam only behind Tet. It is held in Phu Tho Province from Lunar March 8th-11th, the most important day is the 10th. One of the most essential values in Vietnamese culture is to worship our forebears, and Hung Temple Festival is an activity that shows it. Hung Temple was built to commemorate the 18 Hung Kings who are said to have established and developed ancient Vietnam. The first Hung King was the oldest son of a fairy and a dragon who is believed to be the ancestors of every Vietnamese people. Although all of it is just a myth, the festival is still a meaningful occasion to remind us of our origin and how we should cherish and support the people around us.

Read Folk Religion in Vietnam for detailed information about this myth.

There are two main parts of the festival. The former part is about the rituals which include giving the offerings and the memorial for the senior notables and then the local people and tourists. After that are the palanquin competition and traditional games. The competition is where you can see many meticulous and delicate palanquins, each of them is made in a nearby village. The one that wins would have the pleasure to hold the rituals next year. It is a pride for all the villagers as they believe that is a sign for their happy, prosperous year blessed by Saints. A part of the rituals at Hung Temple Festival

Perfume Pagoda Festival is one of the largest and most famous Vietnam festivals. It is celebrated at Huong Pagoda, Hanoi from January 6th to March of the Lunar Calendar. More than one million people are coming to join this festival annually. Each day of the festival, there are more than one thousand visitors coming to Perfume Pagoda

Perfume Pagoda - one of the Amazing Vietnam Pagodas You Have to See - is actually a complex with a number of smaller structures. They are located in an area with many lush mountains, clear rivers, and mysterious caves. Besides coming to this sacred land for religious reasons, many visitors also want to admire the beauty of nature.

To participate in the festival, you first need to come to the Yen River. From there, a small boat will take you following the flow and go through some of the most magnificent landscapes and typical temples and pagodas. There are three different routes, each of which would show you a different side of this complex. After going sightseeing here and there, you could stop watching some cultural activities of the locals including performing traditional music genres and dances. Small boats taking tourists to the festival on Yen River

Kate Festival is not only one of the famous Vietnam festivals but also the most important occasion of Cham people - a minority that accounts for a considerable portion of the Vietnam population. The festival takes place on July 1st of the Cham’s calendar, which is around mid-September - mid-October of Solar Calendar and is celebrated by every Cham person across the country. However, the one in Ninh Thuan Province is significantly elaborate since it is where many ancient Cham towers were erected.

Kate Festival at the Cham towers includes several solemn rituals and interesting activities. The first part of the festival is a series of important ceremonies. They are the ceremonies to receive the King’s clothes, open the tower’s door, wash and wear costumes for the gods’ statue, and the last one is the Great Ceremony. All these rituals are performed by special religious people to ask for permissions and blessings from the Gods. They also require lots of delicate offerings and support from Cham traditional singing, dancing, and instruments to make the event more boisterous. The music even goes stronger after the Great Ceremony ends to begin the entertaining activities. In Cham’s villages, the festival is no less jubilate. The atmosphere of the whole town already gets busy several days before the festival. All the villagers have their responsibility to prepare for this important event. They clean their house and the public areas, put up stages, and take care of the offerings. After the rituals at the Cham towers end, they would start to carry out competitions of weaving, soccer,... or traditional concerts. Just like Tet Nguyen Dan, Kate Festival is also an occasion for the Cham people to unite with their families and enjoy the dishes.

Summary of Famous Vietnam Festivals across the Country

Some of the famous Vietnam festivals are Tet Nguyen Dan, Hung Temple Festival, Perfume Pagoda Festival, and Kate Festival. They are all important occasions that reflect Vietnamese culture and have a tremendous impact on the local’s life. Tet Nguyen Dan is the New Year Festival to the majority of Vietnamese people, and the Perfume Pagoda Festival which also takes place around the same time of the year is a chance for people to get some nature retreats and visit a sacred land. Hung Temple Festival is an event that plays a vital role in the Vietnamese faith, while the Kate Festival is a unique celebration that carries specific characteristics of Cham people living in this country.

Sign up for a travel insurance plan to explore more of Vietnam: