The 8 Best Things to Do in Hue Vietnam When traveling to Hue, Vietnam, there is no shortage of sights to see.

The former capital is rich in culture, surrounded by various tombs, palaces, and temples. We've picked out our eight favorite things to do while staying in Hue.

During the autumn, the flower orchards around the river fall into the water, giving it a perfume-like aroma. Hence it is also known as the Perfume River. Enjoy a guided ride on a boat along the river for some scenic views of Hue. 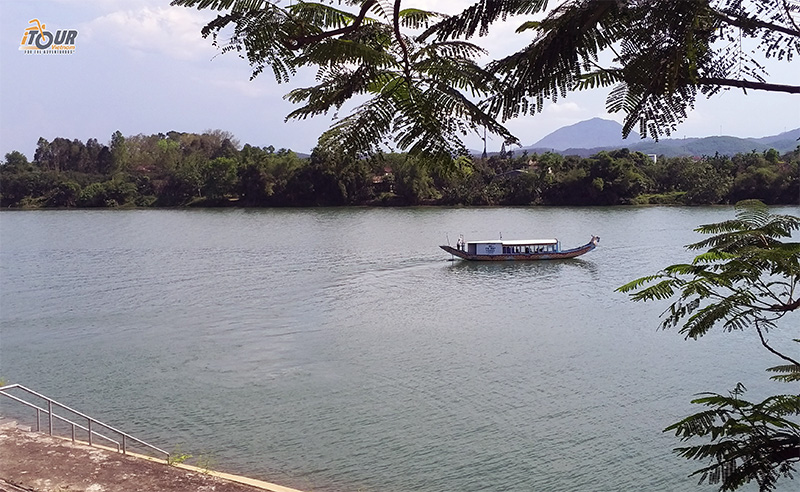 Lang Co is a good stop-by beach with a majestic view if you are ever on your way from Hue to Hoi An. You can enjoy a BBQ seafood lunch at one of the beachside shack cafes. Due to the different tides levels, it is not recommended that you go for a swim, but the view is scenic.

Check prices and availability of the best hotels in Hue:

If you want to immerse yourself in the culture of Hue, then make sure to spend some time at Dong Ba Market.

Dong Ba Market is considered the largest marketplace in central Vietnam. This open-air market attracts 5,000 to 7,000 people a day and is bursting with local culture.

You can find traditional Vietnamese wares that make excellent souvenirs for tourists, such as circular cone hats.

And while a lot of Dong Ba Market features items geared toward tourists, it largely caters to locals.

This is the best place to go if you want to shop for freshly prepared Vietnamese food. When trying the different foods in the market make sure to try some che, (or sweet soup), which Hue is well known for. This Vietnamese noodle soup originates from the Central province of Vietnam in a city called Hue. This dish is greatly admired for its balance of spicy, sour, salty, and sweet flavors. The broth is the main ingredient that gives the soup its distinctive flavor. It requires preparation time by simmering beef bones and beef shank in lemongrass with fermented shrimp paste and spicy chili oil. The noodle used is thicker than the Pho, and other complex ingredients include beef brisket, pork leg, blood pudding, thinly sliced pork sausage, diced scallions, white onions, laksa, lime wedge, cabbage, perilla, banana flower, bean sprouts, mints, and tofu. 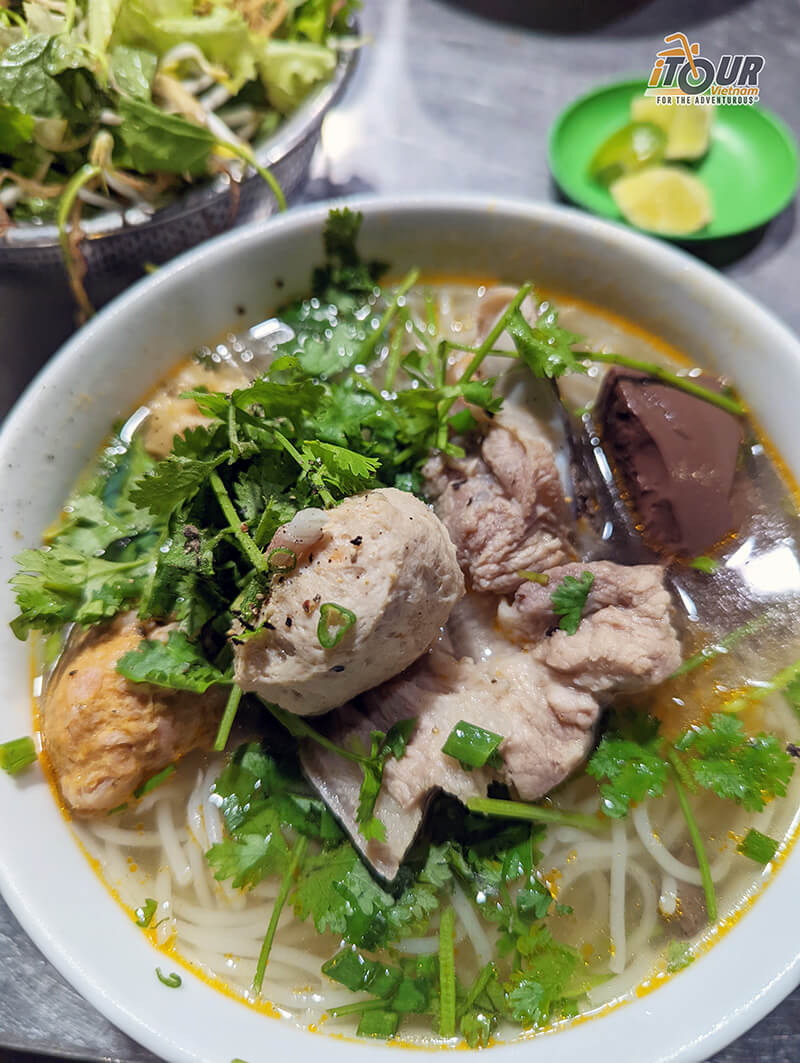 Another great way to get a taste of the culture is by visiting a few of the tombs surrounding Hue, Vietnam.

While there are seven to choose from, popular tombs are the tombs of Minh Mang, Tu Duc, Khai Dinh, and Dong Khanh.

Tu Duc's tomb, located 5km south of Hue, has expansive grounds, so if you want to see it all then be prepared to set plenty of time aside. Although, you won't be seeing the tomb where Tu Duc was laid to rest, as he was buried in a secret location somewhere in Hue.

The tomb of Khai Dinh is different from what you might expect, especially if you visit it after checking out Hue's other tombs. It has a mixture of Vietnamese and European architecture, due to Emperor Khai Dinh's close association with France.

When deciding what to do in Hue, make time to visit this pagoda.

Overlooking the Perfume River, the Thien Mu Pagoda, or "Heavenly Lady" pagoda, is seven stories tall and seen as an unofficial symbol of the city.

Each of the seven stories is said to represent a Buddha that appeared in human form.

You can also view the Austin motorcar that the monk Thich Quang Duc used to drive to Saigon in 1963 for his self-immolation protest against the Diem regime. 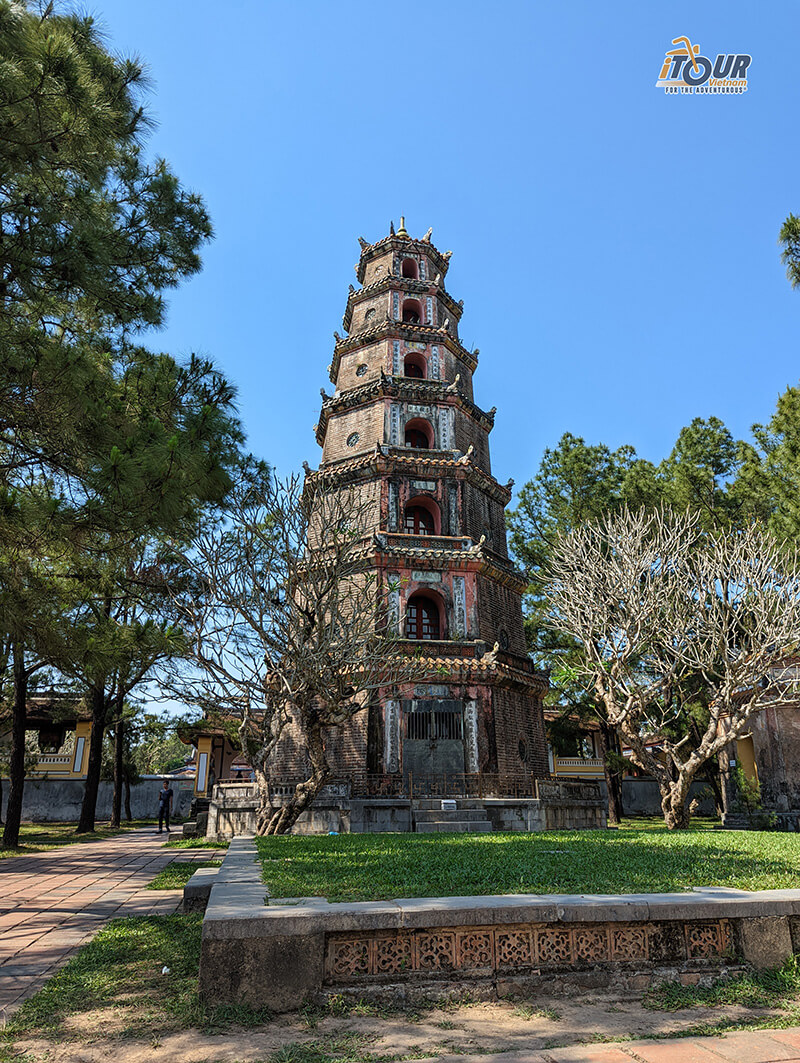 While this isn't the most time-consuming site to visit, it still has cultural significance and is lovely to see.

Located about 7km east of Hue, Vietnam, this Japanese-style footbridge was arranged to be built by Tran Thi Dao, who was the wife of a high-ranking local official.

She suggested the bridge be built to help transportation and communication since the canal separated the village. In 1925, an altar was placed on the bridge in her honor.

Nowadays, you can stroll through under the covered bridge and find locals relaxing in the shade.

If you are staying in Hue, plan for at least a day's visit to Bach Ma National Park. Although, there is so much do here that you could stay overnight and make it a two-day trip.

It's about an hour outside of Hue, the drive is worth it and the coastal route that takes it there is an adventure in itself.

With over 1,400 species of plants, this park prides itself on its biodiversity. You can also spot plenty of native wildlife, featuring over 1/3 of the bird species found in Vietnam. A bird watcher's dream!

Aside from observing local flora and fauna, you can hike one of the many trails to take a dip in a bracing waterfall, or check out the villas built by the French in the 1930s that have been left to the elements.

When you're planning a trip to Vietnam, make sure you don't skip out on the rich culture and excitement that Hue has to offer. As stated earlier, Hue has an abundance of attractions, and we've only listed our eight favorites.

See what the best travel insurance options have to offer

Did we leave off your favorite Hue destination? Let us know in the comments.

And if you're planning a trip to Vietnam and planning on spending time in Ho Chi Minh after checking out Hue, book a motorcycle adventure today!

The 5 Most Fascinating Museums in Vietnam

The 5 Best Unusual Places to Visit in Vietnam

The Top 5 Places to Visit in Ho Chi Minh

many imperial tomb visits and trying out the rice wine, overall a great city to learn about the former capital of vietnam

0 Cancel Reply
many imperial tomb visits and trying out the rice wine, overall a great city to learn about the former capital of vietnam
Cancel Update Comment