Is Vietnam friendly and safe for LGBT Travelers?

Yes. Although the older generation in Vietnam still has a traditional mindset towards the LGBT community, there is not really a punishment or social hostility against the LGBT community. You might face a few stares if you're holding hands or showing a little bit of affection in public, but as a whole, you are free to explore every corner of Vietnam regardless of your sexual orientation.

Are there LGBT-centric spots in Vietnam?

Most big cities in Vietnam have a vibrant selection of LGBT-friendly places such as bars, pubs, and even drag shows, as well as annual VietPride parades in Vietnam's metropolitans such as Ho Chi Minh, Hanoi, and Da Nang. There is no shortage of fun activities for LGBT folks in Vietnam.

Like many other countries over the world, LGBT (Lesbian, Gay, Bisexual, and Transgender) identities have been discussed for a long time in Vietnam’s history. However, the topics of sexual relations had not appeared until the arrival of Confucianism in Vietnam’s feudal society. During the French colonial era, Vietnamese started using the word “pédé”, in “pédéraste”, a French word describing men who practice pederasty. Throughout the public views of homosexuality in Vietnam, there is plenty of stigma and discrimination. In many families, the fact of having LGBT children is considered to ruin the family's values and honor. However, homosexuality and transgender identity, even then, is not criminalized in Vietnam and an LGBT person is possibly allowed to serve in the military.

Despite the difficulties, the LGBT community in Vietnam has strongly developed over the years. Together with the modernization in the 21st century, there have been several positive changes toward recognizing LGBT rights. In 2009, Pham Le Quynh Tram, who was born a man, became the first transgender in Vietnam being legally recognized by authorities as a woman. There are more and more gay marriages every year. In 2010, Tuoi Tre Online, an official national newspaper, published a letter written by an 18-year-old reader. This letter described in detail the difficulties he had to encounter when dealing with his parents after coming out. This was the first time the major media in Vietnam agreed to publish on homosexuality in a socialist country. 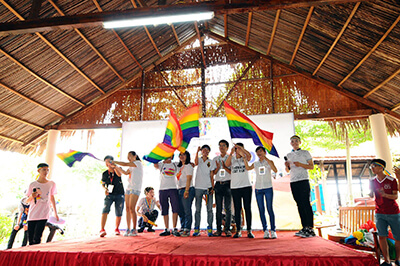 The perception of the media and public on the LGBT community has also improved over the last few years. LGBT movements such as the Vietnam Pride, an annual series of events supporting the community initialized in Can Tho City in 2015, are substantially supported by the media like newspapers, TV, books, and celebrities. Annually, the LGBT community in Vietnam holds an award show to honor the activists advocating and promoting the LGBT movement in Vietnam called LGBTIQ Appreciation Awards. 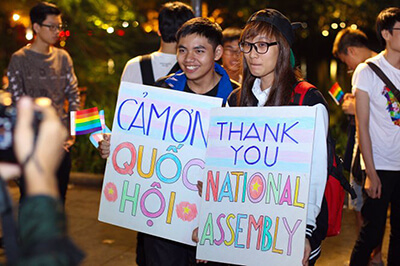 In the legal aspect, according to the Law on Marriage and Family in 2000, same-sex cohabitation and marriage were forbidden. However, on January 1st, 2015, the 2014 Law on Marriage and Family officially went into effect, removing the previous law which made marriage between two individuals of the same sex illegal. It also states that while Vietnam’s Law allows same-sex weddings, those relationships will not receive any legal recognition and protection from the Government. In spite of the limitation, this is still an essential improvement in LGBT rights recognition.

Vietnam is now attempting to promote itself as a tolerant country, welcoming LGBT travelers from all over the world. Today Vietnam's public perception of the LGBT community, especially in the metropolitan regions including Hanoi and Ho Chi Minh City, is increasingly accepting. Due to mild-mannered personality having existed for centuries, Vietnamese are unlikely to make public discrimination against the LGBT community. Therefore, violence against LGBT travelers would rarely be seen in Vietnam.

For more information about LGBT in Vietnam and LGBT-centric activities, you can join, there are many communities and Facebook you can have a look at. Some of them are mostly in Vietnamese, but you can follow to catch up with public events for LGBT in Vietnam.

ICS Center: is the most prominent organization for the LGBT community in Vietnam and the organizer of the infamous VietPride

To get the most out of your traveling time, have a look into these next LGBT travel in Vietnam tips.

Public display of affection. Generally, for both straight and gay couples, showing too much affection in public is not recommended, especially in suburban and rural areas. You wouldn’t get into trouble, but it is offensive to the locals as most as considered conservative, so you may want to avoid it. For more tips on dos and don’ts in Vietnam, read more about the Vietnamese culture. Night activities. You can safely and publicly enjoy nightlife and entertainment like dining, walking around, and trying street foods at night markets in Vietnam, shopping, and going to high-end clubs and bars in the backpackers’ district or the center of big cities like Ho Chi Minh City, Hanoi, and Danang.

Transportations. As a couple traveling together, car, taxi, or private transfers should be more comfortable. Going around town in Ho Chi Minh City on a rickshaw or tandem bike in Vung Tau or Da Lat could give you a fun and romantic time together, leisurely enjoying the views. Strolling down walking streets, shopping, and having some local street foods are also recommend things to do. Learn more about other transportations in Vietnam.

Accommodations. Hotels should be the best choice since they offer more privacy than other types of accommodation. If you want to try homestay, make sure there is a local guide to help you check the availability and explain the Vietnam customs and rules of the host to you. For solo travelers who are looking for room sharing, so check the location's reviews and safety guidelines carefully.

Private tours. If traveling as a couple, you may want to have personal time with your partner instead of with other tourists; then we recommend you check out these highly rated private tours in Ho Chi Minh City.

Attractions for LGBT Travelers in Vietnam

Here are some travel destinations in Vietnam that mostly welcome the LGBT community and are perfect for a romantic getaway.

In big cities like Ho Chi Minh City, Hanoi, and Da Nang, there are shopping districts at their city centers. The shopping malls have a variety of brands, both international and local brands. The cities are also convenient for shopping souvenirs as they are where the culture of many regions are mixed and where trading activities happen.

You can also tailor your ao dai with “FedEx” tailor service in Hoi An, buy candy treats in the Mekong Delta, or purchase the famous Dong Ho paintings in Bac Ninh.

Check out our blogs on shopping guides in Vietnam or shopping in Ho Chi Minh City.

Mountain ranges, national parks, sunny beaches, and beautiful natural sceneries are what Vietnam has to offer. Get on Indochina’s highest peak in Sapa at Mt. Fansipan, study wildlife of tropical land in national parks like Ba Vi and Cat Tien, scuba dive at the islands of Phu Quoc and Con Dao, explore the World Heritage Site Phong Nha-Ke Bang, and snorkeling and kitesurfing at the clear water at Nha Trang beach, or simply admire the beauty of Halong Bay.

For culture and history learners

Hoi An is a famous destination for ancient town travelers. There are traditional craft villages and architectures from the 18th century in this beautiful small town in the Central of Vietnam. Various pagodas in Vietnam like Thien Hau Pagoda and One Pillar Pagoda would tell you a bit more about the beliefs and worship of the Vietnamese.

Hue is the old citadel of Vietnam, making it a great place to study the history of Vietnam in the 19th century. And signing up for some Vietnam War tours would help you understand more about Vietnam's contemporary history.

Summary of LGBT travel in Vietnam

With the rapid progress of LGBT activists, homosexuality is gradually accepted in Vietnam with more acceptance in the big cities than in the countryside. LGBT travel, therefore, is much more welcome than it used to be in Vietnamese society and it is overall safe for the LGBT community to travel in Vietnam.

You have many useful information on your website, and great to see LGBT mentions. Way to go!

0 Cancel Reply
You have many useful information on your website, and great to see LGBT mentions. Way to go!
Cancel Update Comment

are there any lgbt events in the city