A Guide to Vietnamese Beers

Beer is everyone’s favorite drink to cool down the thirst on hot summer days, especially for people living in tropical countries. In Vietnam, beers are quite cheap, and the Vietnamese beer culture welcomes any love for beer; from simple lagers to craft beers in any range of prices and services. Discover your favorite types of beer and where to drink with our guide to Vietnamese beers.

When Beers First Came to Vietnam

Beer production was brought to Vietnam by the French at the end of the 19th century. The brewing process at that time was done entirely manually without any machines. This was also the beginning of two big domestic Vietnamese beer brands: Habeco (Hanoi Beer) and Sabeco (Saigon Beer). From 1970, the government's adaptation of the new economic policy has made changes to many industries and welcomed many foreign tourists into Vietnam. One of the impacts of this change was the development of the Vietnamese beer industry and thus creating job opportunities in other sectors like agriculture, engineering, and packaging. Many joint ventures were also established in this period, and beer production systems have been upgraded with new tools and equipment.

When Do Vietnamese Drink Beers 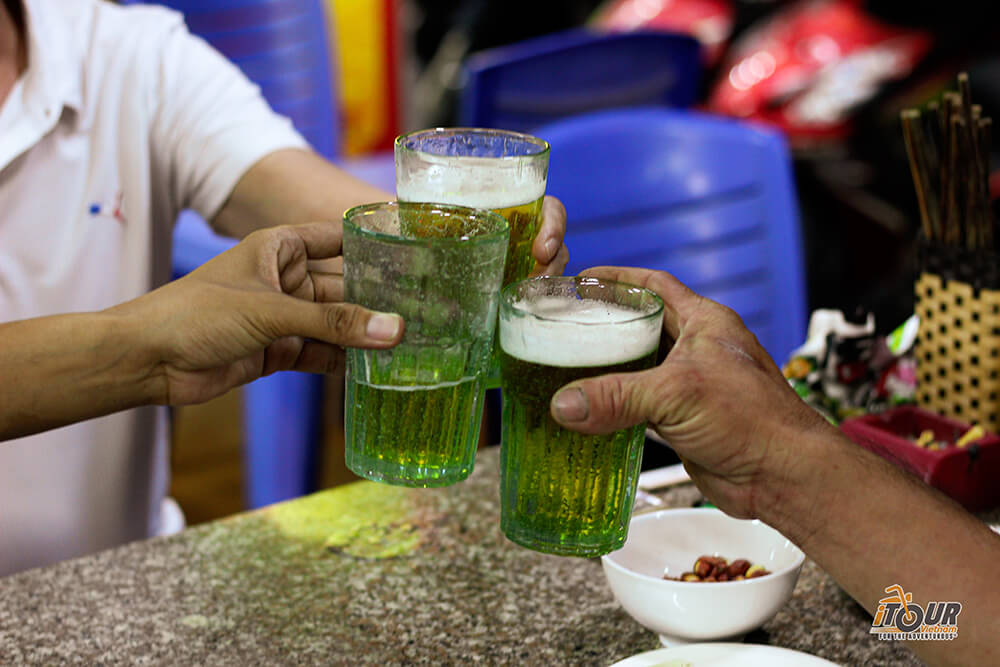 Beer is a refreshing drink for the hot summer days, but that is not the only reason why many people in Vietnam enjoy drinking beer. Drinking beers have become more or less a cultural trait and a routine for many Vietnamese. In Vietnam, the expected courtesy is to invite each other for a beer when doing business, attending events, celebrating, or having friend reunions. People, mostly men, usually go for a drink with their clients and friends after work. Therefore, you will be more likely to witness the whole streets lined up with plastic chairs and tables on the sidewalks and packed with people from different walks of life. Read more about the Drinking Culture in Vietnam.

How Vietnamese Drink Their Beers

Vietnamese usually drink beer that is poured into a mug with ice cubes rather than refrigerated beers straight from bottles or cans. When drinking with the locals, sometimes they say “yo” - which means “cheers” in English, and they may try to pour beer into your mug as well, as an act of hospitality or merely to test your capacity. If you find this unfamiliar, you can simply order your refrigerated beer. 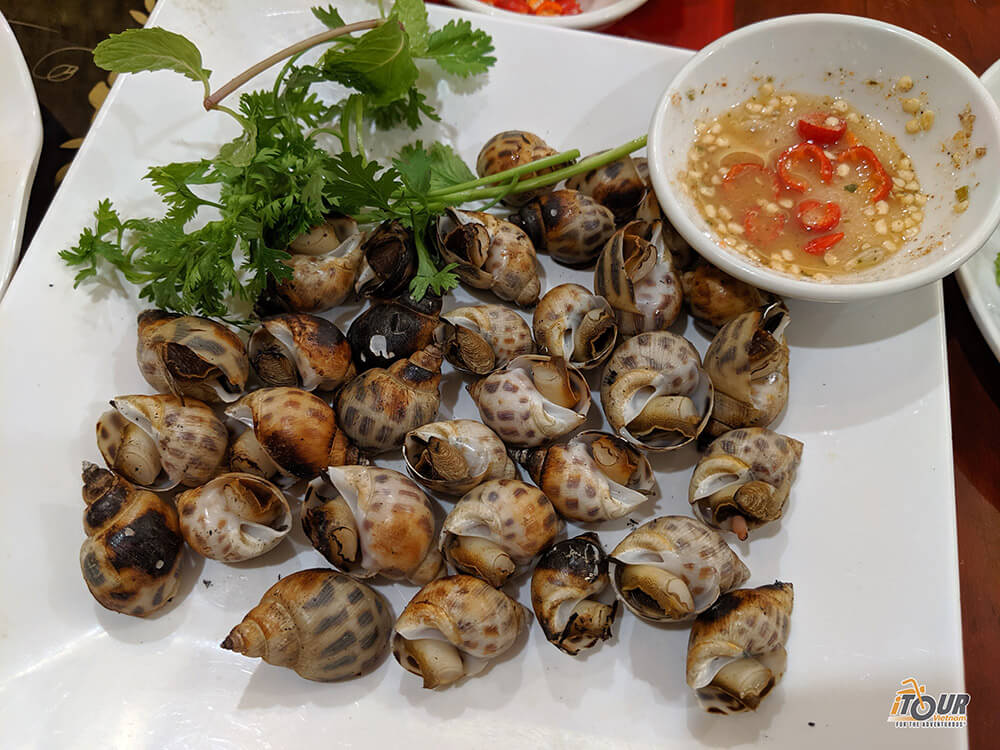 Sea snails on a plate 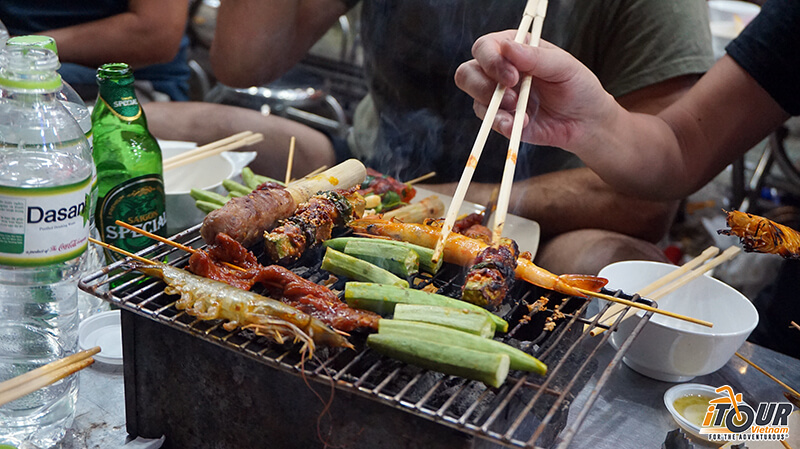 BBQ goes hand in hand with some chilled bottles of beer

Types of Beer in Vietnam

“Bia hoi” is a beer that is brewed in a short period (about 7-10 days), and pasteurized and thus its shelf-life is shorter, its ABV and its sugar content are lower than other beers. 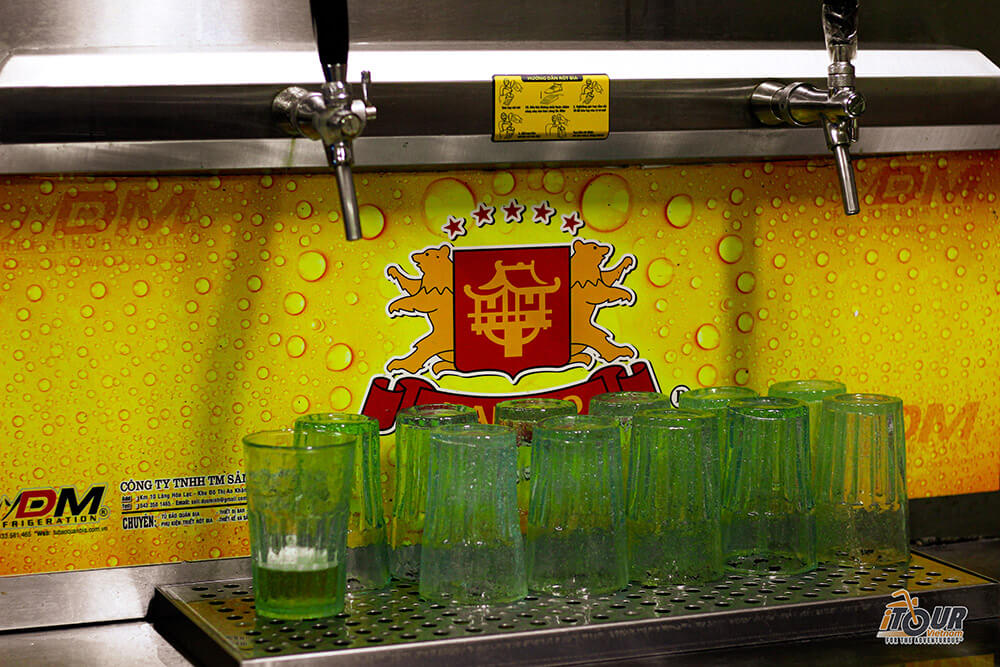 Bia hoi is a signature of Hanoi

Bia hoi is considered one of the most authentic Vietnamese beers, and no preservatives are put in during fermentation and the brewing process to preserve its fresh taste. After fermentation, the beer is extracted into kegs and sterilized with compressed air, hot water (80 degrees Celsius), sodium hydroxide solution (2-3%), and hot steam (135 degrees Celsius), then cooled down with carbon dioxide gas. This type of beer is most common in the North of Vietnam and is the cheapest, about VND 10,000/mug. You can also get to see draft beer getting made in brewpubs with mini brewery equipment, but this may be a little more expensive than those beers sold in sidewalk restaurants.

The number of hops in bottled/canned beer is usually 30% more than that in “bia hoi.” Its brewing time also takes longer; the primary fermentation lasts for about 5-7 days, and the secondary fermentation lasts for more than 6 days. After that, the beer is filtered, stabilized with carbon dioxide gas, and extracted. You would see more canned beer than bottled beer in Vietnam. The price is VND 15,000+ for a beer can and VND 20,000+ for a beer bottle. 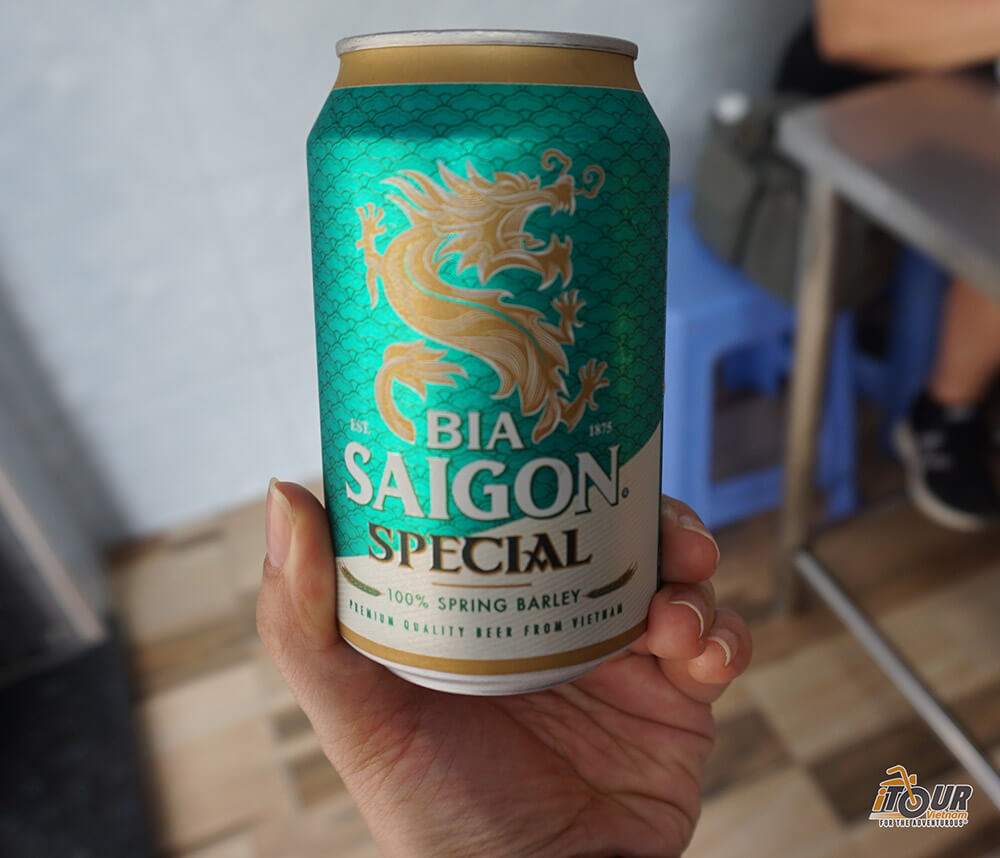 Some of the familiar local brands of bottled/canned beer you may find in Vietnam are Saigon Red, Saigon Special, Hanoi Beer, 333, Huda, and Su Tu Trang (White Lion). Many people also prefer the taste of imported or international brands like Heineken, Tiger, Biere Larue, Budweiser, and Sapporo. 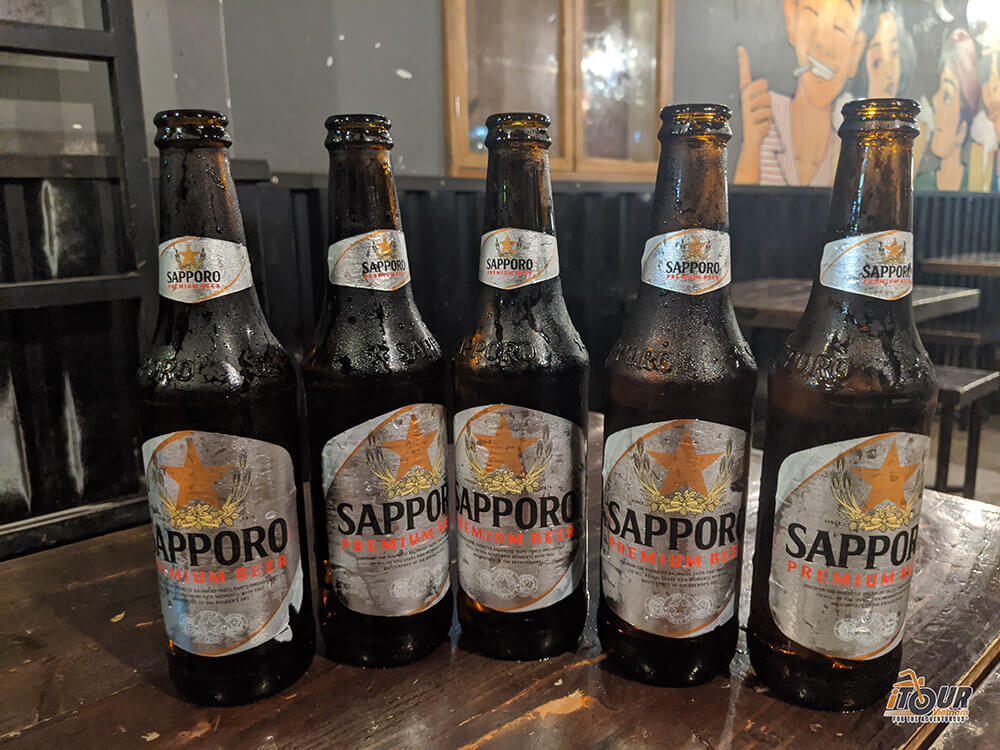 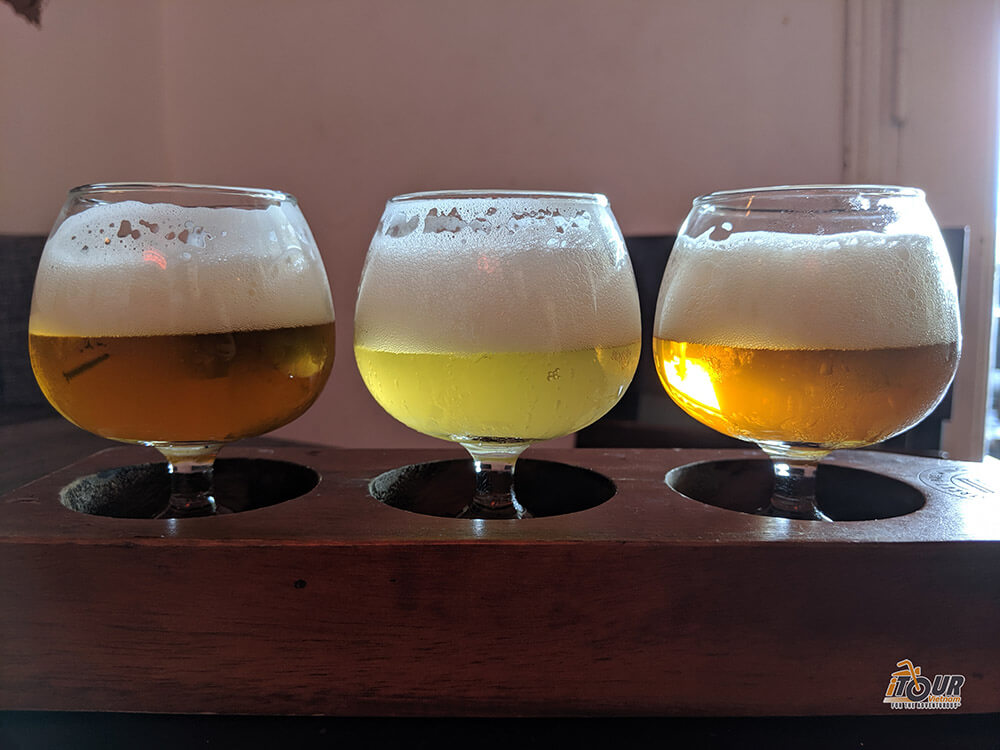 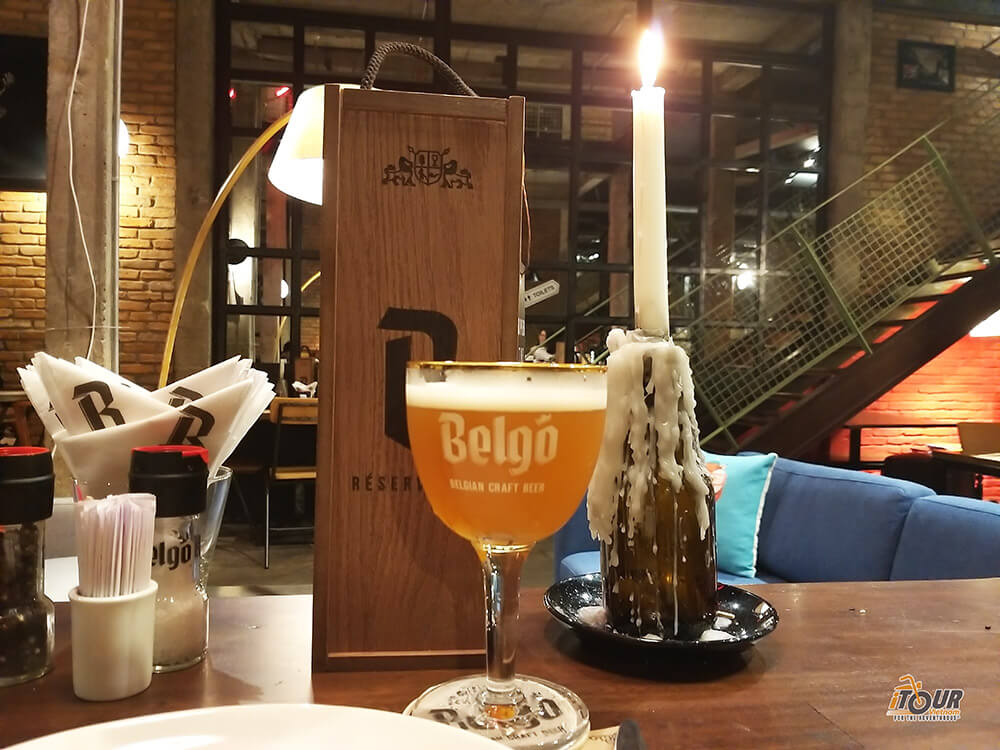 Because of the sophistication of the brewing process and ingredients, you may have to pay VND 100,000 for a pint of craft beer.

Where to Drink Vietnamese Beers 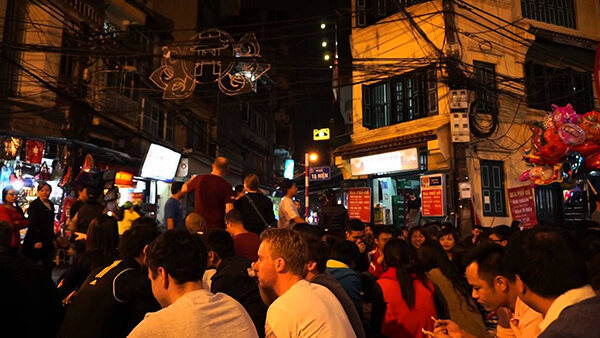 While in other countries, people go to pubs or bars for a drink; in Vietnam, people go to “quan bia” or “quan nhau” for beers. The differences are that these places also serve food that goes with beers and they don’t have a counter in their stores. If there are streets for electronics, flowers, for clothes, in Vietnam, there are also streets packed with beer restaurants where you can enjoy some cheap Vietnamese beers with delicious local snacks. 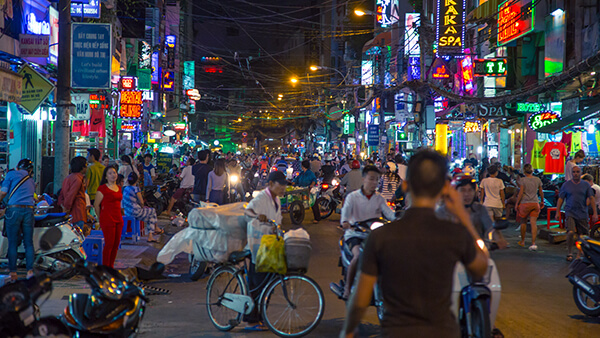 In Ho Chi Minh City, you can find many “sidewalk” restaurants - tables are set outdoors, on the sidewalks like those on Bui Vien Street, Truong Sa Street, and Hoang Sa Street. In Hanoi, there are many beer restaurants in the backpackers’ streets like Ta Hien and those in the Old Quarter. You can go to these places and have a pint of “bia hoi” or enjoy the delicious food. Seafood or any other food restaurants also serve canned or bottled beer, but it would usually cost you more.

With the integration of Western culture, many young people in Vietnam like to go to more high-class places for beers like the sports bar and trendy sky bars. Their price, of course, is also higher than that of small pop-up restaurants on the sidewalk.

Apart from the trendy sky bars, there are other hidden charms within the city at more reasonable prices.

Things You Need to Know When Drinking Vietnamese Beers

Words and phrases you may want to know to order and have a drink like a local:

Nhau - Drink
Bia hoi - Draft beer
Moi – Food, snack goes with beer
Vo - Cheers
Chai - Bottle
Lon – Can
Pha moi – this phrase is used to complain when you don’t drink but keep eating the food (but who could blame you, the foods are delicious).
Mot tram phan tram – bottoms up, literally means 100 percent.

Learn more Vietnamese with our guide, Useful Phrases in Vietnamese. 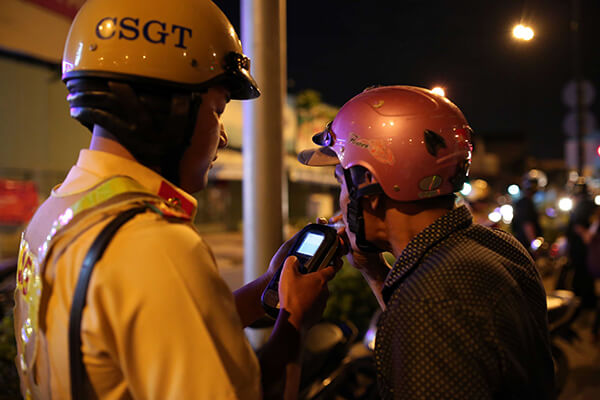 If you travel in Vietnam with a private vehicle like a motorbike or a car, you need to know the alcohol limit in Vietnam. It is essential to have fun and be responsible at the same time. Drinking and driving is a problem everywhere.

For car or other vehicle drivers:

For more information, read our blog on driving in Vietnam.

Summary of the Vietnamese Beers Guide

Vietnamese beers have a younger history than other countries, but it has become a thriving industry in Vietnam since the 90s of the 20th century. There are many types of Vietnamese beer like “bia hoi,” draught beer, packaged beer, and craft beer but “bia hoi” is the most common beer in Vietnam, especially in Hanoi because of its low price and low ABV. The foods that go with the beers in Vietnam are also diverse and finger-licking good; if you cannot drink, you can still enjoy these foods as well. The price of beer and one night out drinking will be different depending on the kind of beer, and the places you choose to go to; if you go to fancy bars, it may cost a lot more than street restaurants. And like any other country, it is illegal and dangerous to be drinking and driving so make sure to read the law and keep your drink under the alcohol limit.

I love coming to the beer street in Hanoi for some cheap Vietnamese beers. Great place to make friends

I thought we were just gonna try Vietnamese food on the food tour, but our guide Leah was nice enough to offer us some Vietnamess beer too. Some chilled beers were excellent for lunch

0 Cancel Reply
I thought we were just gonna try Vietnamese food on the food tour, but our guide Leah was nice enough to offer us some Vietnamess beer too. Some chilled beers were excellent for lunch
Cancel Update Comment

I have tried 333 and the saigon special beer, I will need to try the saigon red next time

0 Cancel Reply
I have tried 333 and the saigon special beer, I will need to try the saigon red next time
Cancel Update Comment

would recommend some grilled dishes with the chilled beers