Vietnamese Demilitarized Zone, or V-DMZ for short, was established in Quang Tri Province in 1954, surrounding the historically famous Ben Hai River and Hien Luong Bridge, to mark what goes down in Vietnam history and among the natives as the painful partition of the country. This blog will help you learn more about Vietnam DMZ.

The history of DMZ Vietnam Map

Dates, numbers and events provided below are based on documents from Ho Chi Minh City Council's Library.

The background - when and why Vietnam DMZ was established

Battle of Dien Bien Phu 1954 ended with victory on the side of Democratic Republic of Vietnam, leading to the important Geneva conference in the same year where the Geneva Accords of 1954, or the Agreement on the Cessation of all Hostilities in Vietnam, was signed between the forces of the French Union and the People's Army of Vietnam, officially on July 21, 1954 after many days of meetings and discussions.

Following the accords, a dividing line was formed in Central Vietnam, separating the two army forces, Vietnamese to the north and French to the south of the line. A demilitarized zone (DMZ) was also accordingly established northward and southward of this line “to act as a buffer zone” preventing any conflicts that might lead to the recurrence of hostile activities or violence.

The dividing line (or provisional military demarcation line to be exact) was set to be in Quang Tri Province, a big province in Central Vietnam. Specifically, on the mainland, this line started from the mouth of Ben Hai River, lasting through the course of it, to Bo Ho Su village and then to the Laos-Vietnam frontier. The line was not limited to the mainland only but extended to the territorial water (counting from the coastline of Quang Tri province).

In fact, this demarcation line was more well-known as “the 17th parallel”, suggesting its latitude.

The area of DMZ Vietnam Map

As stated in the Geneva Accords, DMZ Vietnam was expected to cover a “maximum” width of 5 km (3.1 miles) on either side (north and south) of the demarcation line. Since there was no mention of a “minimum” width, both sides (Vietnam and France) decided the width would vary between 2.5 km and 5 km (1.55 and 3.1 miles). Why couldn’t it just be a straight line throughout with a 5-km width on each side? Because of the real topography at some points and more importantly, because of the request from the Vietnam side - to not let this line interfere or divide the existing Vietnamese rural villages or rice fields in Quang Tri province at the time. If the line crosses one village in the middle, that village will be brought totally in or totally out of the Vietnam DMZ. 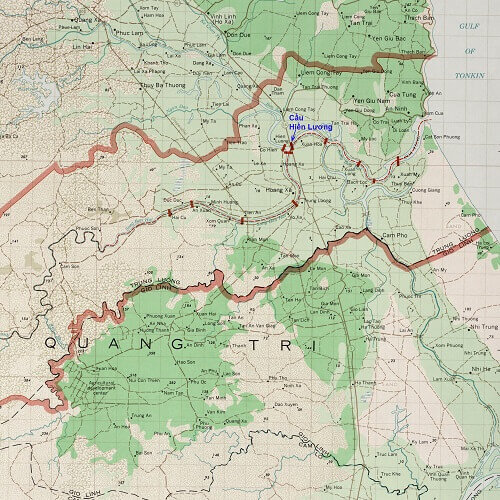 Another term agreed by the two sides was that the provisional demarcation line and the Vietnam DMZ would extend to only as far as where it was controllable. “Controllable” was perceived when concerning 2 aspects: human resources guarding the zone and the natural geography of the area in question. The 100 police officers (each side) clearly wouldn’t manage to supervise too big a zone, and the perilous and rough region from Ben Tat (Vietnam) to Laos-Vietnam frontier was too challenging to set up milestones, especially within the 25-day limit given to survey the establishment of DMZ Vietnam map.

After surveying the real situation and agreeing on the above terms, in August 1954, the first milestone, writing in both Vietnamese and French: “Giới tuyến quân sự tạm thời / Ligne de démarcation Militaire Provisoire”, was set up in Mui Si in the zone, followed by others.

The general rules inside Vietnam DMZ in 1954

Besides the aforementioned rules of non-interruption to rural villages and production of Quang Tri province, other important rules were especially concerned with potential violent acts and entry rights:

> Army forces of both sides have to withdraw all of their troops, weapons and arming equipment of any kind from the Vietnam DMZ. Only essential arms for the security policers of the DMZ could remain.

> Both sides are prohibited to commit any violent act starting from within the DMZ or from outside in, or show attitudes that could lead to further conflicts and hostilities.

> No army officers, and even no civilians are allowed to enter DMZ or cross the demarcation line. Permits to do so, however, fall into 3 types: 1. Permanent permits issued by each DMZ (North and South) for their residents, stating details of the resident’s full name, age, address and unique body trace for recognition, to freely move within their DMZ; 2. Temporary permit for outsiders to reside in DMZ for a specific period of time; and 3. Special permits to cross the demarcation line.

Residents of DMZ North can enter DMZ South, and vice versa, only at the 10 points appointed by the management committee of DMZ, that is Hien Luong Bridge and 9 boarding points on either bank of Ben Hai River.

The partition of Quang Tri province into DMZ North and South in 1954 also embodied the division of the country into 2 halves following two different political ideologies of two respective governments, North Vietnam and South Vietnam. Many Vietnam historians consider Vietnam DMZ at the time a “miniature” of the Vietnam War with varied, diverse and intense fights on multiple fields - economy, military, politics, and diplomatics. DMZ North, for example, built and showcased glamourous constructions to reflect economic development, as well as displaying strong, explicit intention of reunification by putting up slogans like “South and North is one” (Nam Bac la mot nha).

It was not until 1976 when two parts of the country had been reunited that Vietnam DMZ was completely abolished.

Exploring the Demilitarized Zone can today be comfortably achieved by joining one of the various organised tours starting daily, mostly from Hue, Da Nang or Quang Tri. Together with a local guide the most famous war settings, such as Khe Sanh Combat Base, The Rockpile, Ho Chi Minh Trail, Doc Mieu Station or the Vinh Moc tunnels are visited on a full-day trip.

Vietnam DMZ founded in Central Vietnam in 1954 after the great Battle of Dien Bien Phu started as a buffer zone to prevent further hostilities from both sides Vietnam and France. However, it later became a miniature of the even fiercer Vietnam War, reflecting intense explicit manifestations of ideologies and intention from both sides North and South Vietnam, to finally be removed in 1976, one year after the reunification of the country.

Get a quote for Vietnam Travel Insurance:

© Written by Vy Thai for itourvn.com

this is good information, thanks

0 Cancel Reply
this is good information, thanks
Cancel Update Comment