To the east of Ho Chi Minh City is another outskirt district, connecting the city with the provinces in the north and east. Learn more about this district - District 9 - in our guide and discover the fun activities you can enjoy here.

District 9 was an outskirt of Thu Duc District in the past, and since January 2021, it has become part of Thu Duc City as part of Ho Chi Minh city urbanization plan. It was also the area receiving constant attacks from the armies of the US and former Southern Vietnam’s government. After years of destruction from the war, District 9’s economy still hasn’t recovered fully, and it stays a rural area despite its convenient location.

Located in the east of Ho Chi Minh City, District 9 is the gateway to Bien Hoa, the city of Dong Nai Province, via Hanoi and Dong Nai River waterways. Besides, the district's authority also plans to take advantage of its vast natural beauty and turns District 9 into a hi-tech cultural and ecological tourism center. In the area of 113.62 square km, about 1.5 times that of District 1, there are 13 wards, over 125,000 households, and many enterprises, universities, and research institutions in Saigon Hi-tech Park.

The arrangement of functions of District 9’s neighbors has made the establishment of this park possible. To the north and east of the district is Dong Nai Province - the industrial area with many factories of all kinds, while its west side is the college town - Thu Duc District and the south side is the new expat town - District 2. Di An Town, Binh Duong Province, which is another industrial area, is also only a 30-minute drive from the hi-tech park. This establishment has brought more investment and business to the district such as inns and transportation for both the foreign and local workers.

How to Get to District 9

It is roughly 20 km from District 1 to get to District 9. With such a long distance, the public bus is one of the locals’ common choices to travel there. You can catch bus 19 from Ben Thanh Station to Suoi Tien Theme Park or the Saigon Hi-tech Park. The bus fare costs VND 6,000, but it will take approximately 1.5 - 2 hours. Another option is the taxi, which would cost you about VND 250,000 - VND 300,000. The motorbike is not recommended as there could be many traffic accidents on the Hanoi Highway, which is the fastest road to District 9 from the city center.

An important landmark of District 9 is Bot Day Thep (Barbed Wire Station). This location was built as a telegram transmission station of the French, but it also had a secret basement to prison people here. Anyone who were the suspects of joining the revolutionary movements would be caught and brought here by the French soldiers. Many Vietnamese had died in this station because of the imprisonment and torturing. 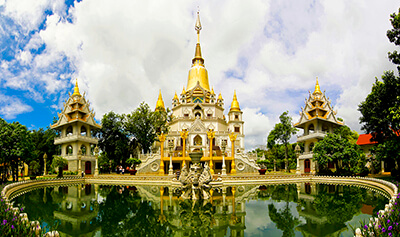 District 9 is also the home of many old pagodas and temples from the 18th, 19th centuries like Phuoc Tuong, Thoi Linh, and Buu Thanh Temple. A newer Buddhist architecture but attracts a lot of visitors for its rare design in Vietnam is the Buu Long Pagoda, built in 1942. This pagoda’s architecture reflects that of Angkor Wat and Chams culture, like those from Thailand with golden conical roofs. It is located inside the Historical and Cultural Park, on the area of over 110,000 square meters.

Another religious destination that is famous among the locals is the Tam Linh Viet Temple. This temple is a private construction of a celebrity-comedian in Vietnam, dedicated to the gods and founders of the art. Every year on the 12th of the eighth month of Lunar Calendar, at this spiritual place for artists and performers, especially those in Southern Vietnam, there is a big ceremony to pay respect to the gods and to ask for their blessing in one's artistic career. The temple is also opened to visitors on every Sunday, the 1st and 15th day of every month in Lunar Calendar. Besides these places, there are Catholic churches across the district and the Hung King’s Memorial Temple where many of Ho Chi Minh’s citizens come to pray on Hung Kings Festivals. 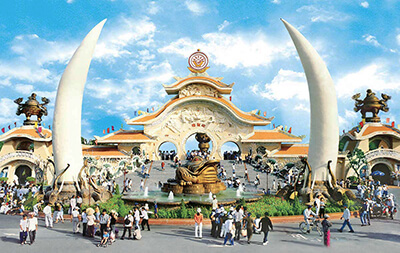 On its way to development, District 9 does not fall short of entertainment areas. One of them is Suoi Tien Park, the most well-known man-made park for many years. This park is most suitable for family picnics and day trips. There are waterpark and recreational areas with cultural themes like national heroes and mythical creatures. On the Hung King Festival, there is also a ceremony held in the park, attracting a lot of local visitors.

Check out the list below for more details of attractions in District 9.

Most of District 9's area is dedicated to the hi-tech park, the ecological tourism center, so it is easier to find restaurants in or near these places. You can also go to the streets where many eateries gather like Le Van Viet, Do Xuan Hop, and Tang Nhon Phu to look for your favorite local foods. 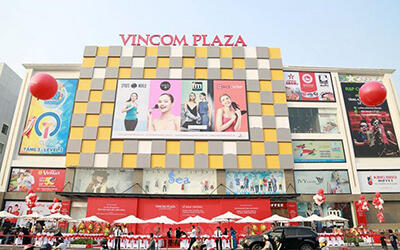 As a district quite far from the city center, there are little high-class shopping malls or stores. But visiting District 9 is a perfect chance to experience an authentic Vietnamese lifestyle and scenery. 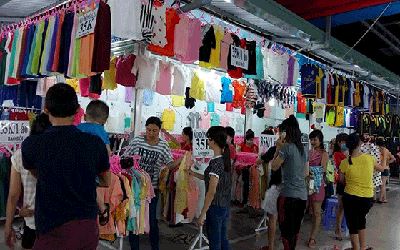 Most of the parks and recreational areas in District 9 only open from early morning around 9 AM to 5 PM and close at night. On the other hand, businesses like the night market, shopping mall, some eateries, and street foods (like those on Le Van Viet and Dinh Phong Phu Street) are active as the sun goes down. The Man Thien Night Market is no less exciting than the one in Thu Duc, you can find a lot of items and foods for a low price, but you may want to consider their quality and safety before buying or consuming. Seeing the bustling of a market at night in a quiet area like District 9 could be an interesting experience.

A Conclusion of District 9 in Ho Chi Minh City

After significant damages from the war, District 9 is slow on its way to develop yet gradually become a center for ecological tourism and hi-tech research of Ho Chi Minh City. Without many upscale activities and attractions, the district offers a more rustic and authentic experience getting close to nature and understanding more about another side of the most dynamic city in Southern Vietnam.

Learn more of other districts in our Overview of Ho Chi Minh City Districts or Vietnam travel information in other guides.