Ho Chi Minh City isn’t just all about the fancy downtown districts like District 1 and District 3. Let us introduce you to District 8, a less touristy area yet an intriguing one among the 24 districts of Ho Chi Minh City. Get to know how life is at the meeting spot of the old and the new and what to do when in District 8.

Sprawling an area of approximately 20 square kilometers on the southern part of Ho Chi Minh City, District 8 is divided into 16 wards and houses over 400,000 citizens. With a special location sandwiched between the so-called “old town” (District 5 and District 6) and “new town” (South Saigon - Nam Sai Gon, including District 7), District 8 seems to enjoy the best of both worlds, driven by speedy economic growth and transport development.

The interruption of local river branches and channels does not prevent District 8 from connecting to its neighboring districts, hugely thanks to the local authorities’ infrastructure investments. The grandness of Dong Tay Highway, Nguyen Van Linh Highway, Pham The Hien Street, and Nguyen Quang Buu Street has come to prove this, making commerce and service sectors the major driving forces of District 8’s economy. 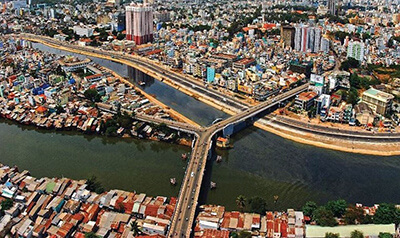 District 8 and its iconic Y Bridge

How to Get to District 8

District 8 is 16 km away from Tan Son Nhat International Airport. However, public transport isn’t very convenient. There is no bus route that goes straight from the airport to District 8, so you need to hop on at least 2 buses to reach the destination. Besides the extra time of switching buses and going the rougher route, the fatigue of waiting in the not-so-friendly weather of Ho Chi Minh City is another thing you should account for.

Overall, District 8 does not seem to be blessed by nature. Apart from the omnipresent branches of Saigon River across the district, there is no particular natural beauty to marvel at. Instead, District 8 prides itself on the abundant cultural heritage sites which embrace the long-standing charm of Ho Chi Minh City’s rich history and traditions.

Among the fascinating attractions of District 8, Binh Dong Wharf is the most prominent sight. See the table below for a breakdown of District 8’s favorite destinations. 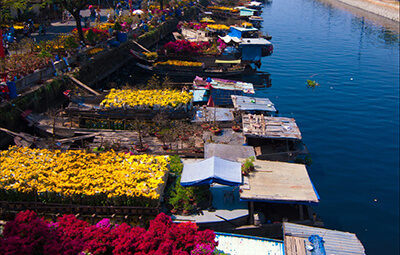 Binh Dong Wharf in the spring. Boats carrying vibrant-looking flower containers from the Mekong Delta farms to start the busiest sales season of the year. 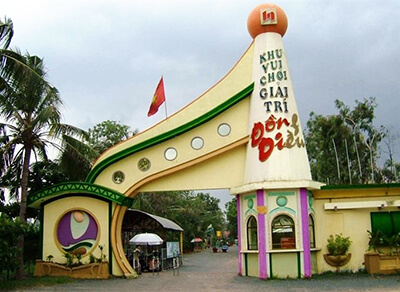 Nowhere in Ho Chi Minh City is as easy to spot an eatery as in District 8. Not only are restaurants ubiquitous, but the cost of eating in District 8 is also so cheap that it leaves you in disbelief.

Vietnamese typical delicacies aside, it is almost impossible to overlook the plentiful sea snails restaurants. In fact, sea snails dishes are what made the name of District 8 and are the reason why residents from other districts flock here every evening. All those scallops, oysters, crab pincers, clams and countless varieties of sea snails being grilled with cheese or garlic, sauteed with coconut milk or spicy butter are simply irresistible. To be fair, no other districts can rival District 8 when it comes to these oceanic gifts, not in terms of tastiness and pricing (20,000 VND for one generous portion compared to 40,000 - 50,000 VND in other districts).

Wonder what the buzz is all about? Go to the hidden alleys of Duong Ba Trac and Pham The Hien streets and see for yourself. Get ready to be animated by the sight of stunning dishes, the aroma of southern-styled seasoning, the chitter-chatter of crowded eateries, and you will find it hard to believe those stellar delicacies are being made by those mundane-looking cooks behind the open-air cooking counter.

Other street eats are also omnipresent in the popular streets we mentioned above. In terms of street eats’ variety and prices, District 8 can be juxtaposed to Binh Thanh District and District 4 in Ho Chi Minh City. 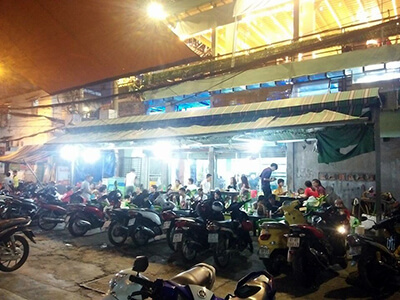 The "cheap" attribute of District 8 again manifests itself in the shopping category. "Second-hand shops" offering hand-me-downs of diversifying sizes and designs abound in this district and are frequented by residents in the area.

So as you can probably imagine, it is not an ideal shopping destination if you want to buy souvenirs or Vietnamese-spirited goods. If you are looking for these, check out favorite streets for your Ho Chi Minh shopping.

See the table below for more details. 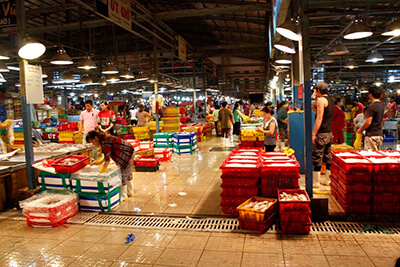 Following the norm of other districts in Ho Chi Minh City, eateries and coffee shops in District 8 stay open for business until late at night. Sea snails streets even stay up to 3 AM to serve the hungry (or heavy-hearted) night owls, probably splurging more on beers than on scrumptious dishes. Karaoke bars and clubs are also the go-to spots for the young and the old alike in the area. So it’s safe to say District 8 is an active district at night.

The cheapest district to eat, shop or live in with an extensive range of things to offer. Turn to District 8 for cultural heritage sites, floating markets or mind-blowing sea snails dish. It’s always intriguing to know the less popular area of a famous city like Ho Chi Minh City.

Fancy seeing the other side of Saigon with local experts? Check out our unseen Saigon tour.

I love your travel guides

I thought tours in HCM would just be around the central areas, so I requested to see a more authentic side of the locals. Coming here was such a refreshing experience

0 Cancel Reply
I thought tours in HCM would just be around the central areas, so I requested to see a more authentic side of the locals. Coming here was such a refreshing experience
Cancel Update Comment

Our group came here with the company's guide and it was very off the beaten path. This is a place you can visit for more local activities away from District 1.

0 Cancel Reply
Our group came here with the company's guide and it was very off the beaten path. This is a place you can visit for more local activities away from District 1.
Cancel Update Comment
First Page Previous Page 1 Next Page Last Page