There are over 10 official religions in Vietnam, and Caodaism is an indigenous one. Constructed in the holy land, Toa Thanh Temple (or as some called: "Cao Dai Temple", but its official name is Toa Thanh Temple) has stood vividly as a headquarter, a home of Caodaists, and an important religious place in Vietnam.

Caodaism, or Dai Dao Tam Ky Pho Do Cao Dai (The Third Great Universal Religious Amnesty), is a monotheistic religion which was founded in Vietnam in 1926 by Ngo Van Chieu (his name in Caodaism - Ngo Minh Chieu), an official of the French’s government during the First Indochina War. The Caodaists believe that their God, represented as the Divine Eye which is also the symbol of Caodaism, is the Supreme being, the Creator of the universe and of all religions. 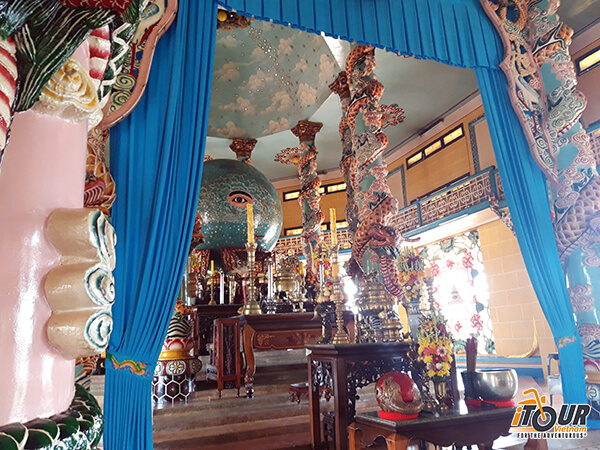 The Divine Eye of The Supreme Being is the sacred symbol of Caodaism.

Spiritism originating from Europe in the early 20th century was the origin of the existence and all the customs of Caodaism. Cao Dai practices and preachings synthesize those of the widely-practiced religions such as Buddhism, Taoism, Confucianism, Christianity, Islam, Hinduism, and Geniism. The religion places a high value on harmony, peace, and uniting all beings and encourage tolerance and sympathy among people around the world. Also, Caodaists believe in karma and samsara (good deed results in good reincarnation), so they pray, love all kinds, and become vegetarianism.

Now, there are about 2-3 million followers in Vietnam, and the headquarter is officially set up in Hoa Thanh District, Tay Ninh Province, which is 4 kilometers Southeast of Tay Ninh City.

Located in Long Thanh Bac Commune, Hoa Thanh District, Tay Ninh Province, Toa Thanh Temple is the governmental Holy See of Caodaism in Vietnam. Its construction was started in 1931 and finished in 1947 but the history of the temple is more complicated than just the numbers.

Caodaism had the religion's opening ceremony in 1926 in Tu Lam Pagoda, Tay Ninh Province. It is said that a new location for the official headquarters of Caodaism was a message from the Supreme. The Caodaists followed the instruction and bought land in the forest, which is the current location of the temple. The architecture and the size of the temple are also believed to have been planned out by planchette writing. 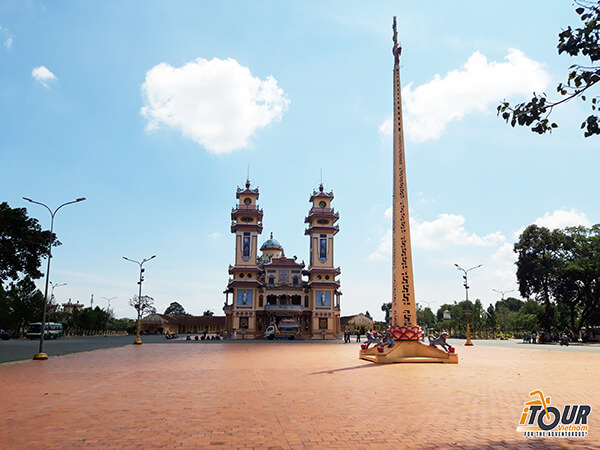 It took around 20 years to complete the temple without any support from professional architects.

Caodaism first embarked on its construction with thatch and soil due to the shortage of financial support and manpower but then postponed due to the internal conflicts of ideology among Caodaists. Later on, the temple was reconstructed several times in 1931, 1933, and 1935 but all efforts were suspended because they were lack of money. It was not until Pham Cong Tac recruited many followers and restarted the project that Cao Dai Temple was finished and inaugurated on the God-worshipping day took place in 1955. The temple completion marks the grandest Caodaist event ever and has always been the pride of all Caodaists.

There are 12 gates to Tay Ninh Holy See. The main entrance is the largest one with the words "Dai Dao Tam Ky Pho Do" in both Vietnamese and Chinese. However, visitors must not enter the Holy See by that gate as it is only for monks and authorized people. 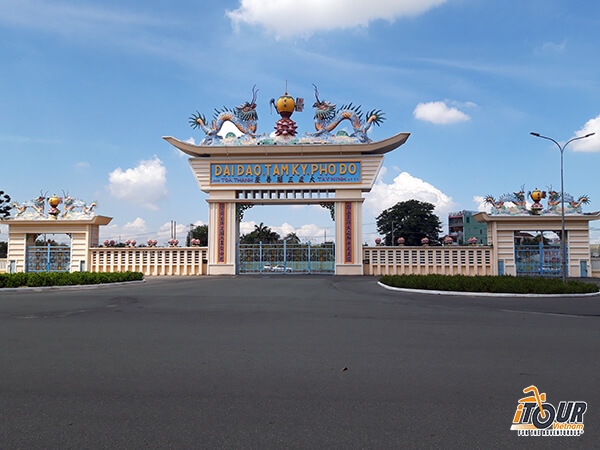 The huge and gorgeous main gate is always opened for the authorized of Toa Thanh Temple. 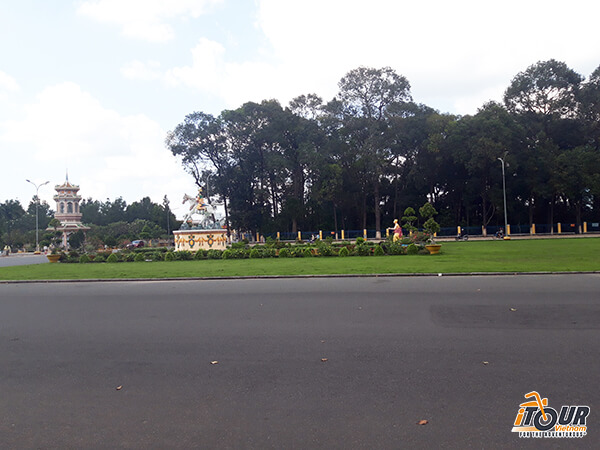 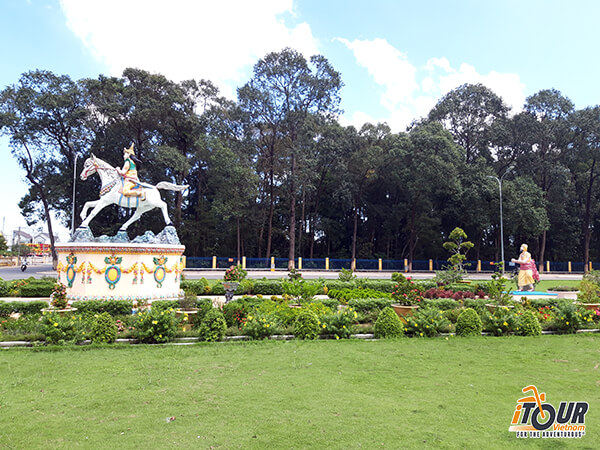 The statue of Thich Ca Buddha riding a horse and accompanied by his student is surrounded by a small garden. 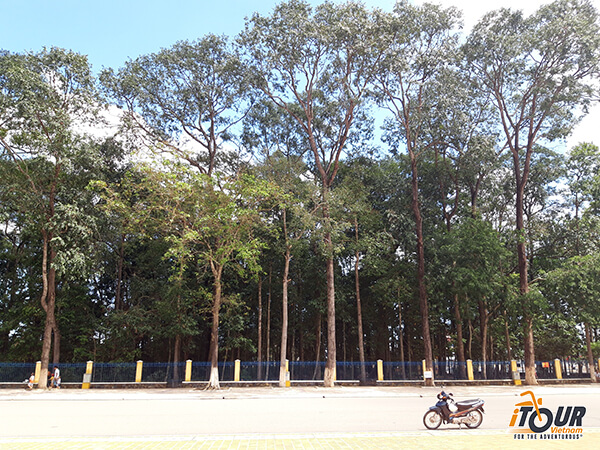 The remaining natural forest on the two sides of the campus

Generally, there are about 100 architectural works around the site connected by wide roads, which makes Tay Ninh Holy See among the largest ones in the world. Standing splendidly in the site is the Toa Thanh Temple which is 140-meter long and 40-meter wide. On the outside, the temple is painted with a sacred yellow color and decorated with many intricate designs of stairs and windows. The temple is supported by many solid dragon sculptured pillars and two impressive 2 belfries (36-meter high each), a pleasing combination of the European and Asian structure. 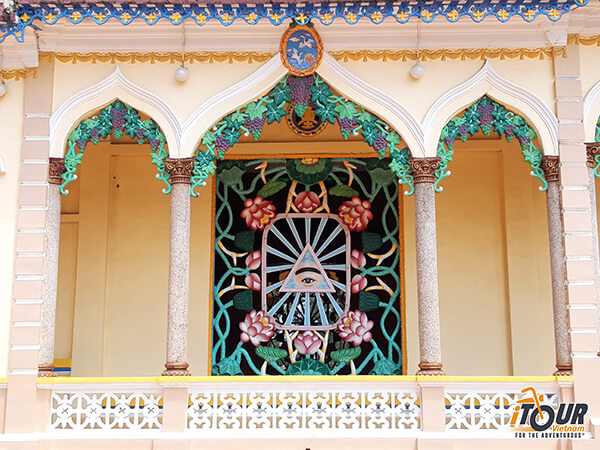 The exterior of Toa Thanh Temple is decorated with a single sacred eye, and lotus carves around. 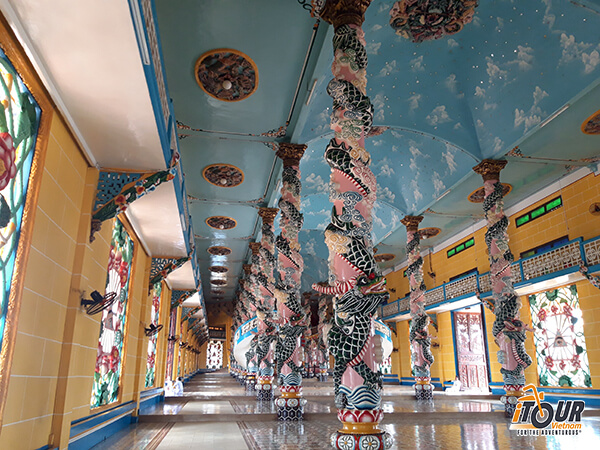 The series of pillars with impressive ornate dragons curling around.

The Great Temple includes 3 towers, namely Hiep Thien Dai, Cuu Trung Dai, and Bat Quai Dai. It is so majestic with the length and the height that you must raise your head to see all around the building. Entering the temple, you may see the ground floor divided into 9 stages as stages you must pass when coming to heaven. As for the ceiling, it is filled with many stars as the night skies. At the end of the temple is the blue globe, representing the universe, with 3,072 stars around and the Divine Eye (The Left Eye) as the symbol of Caodaism. 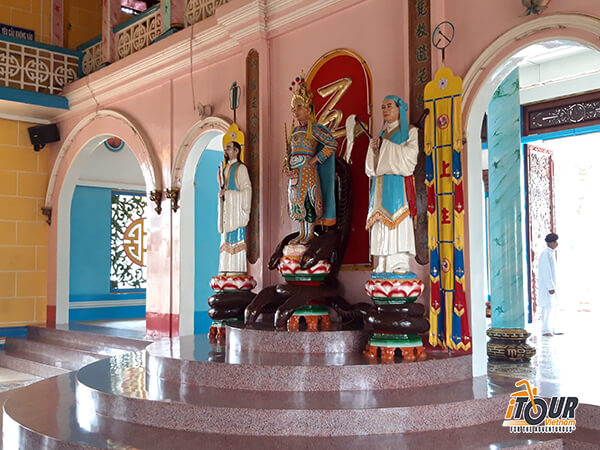 These are the statues of three men who created the Cao Dai religion, from right to left are Thuong Sanh, Ho Phap, and Thuong Pham. 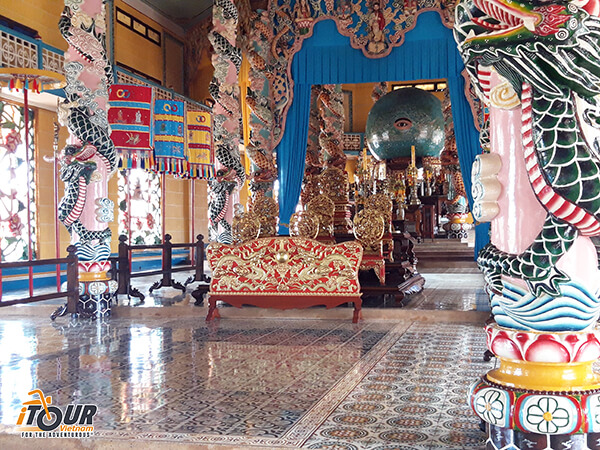 These gold-plate seats represent the positions of the Supreme Being and other saints who are his students.

Overall, Toa Thanh Temple is a unique religious architecture affected by some religions in the world like Hinduism as well as the Vietnamese national feature such as lotus and four mythical creatures. The temple also represents all the holy beliefs of Caodaism in their ultimate God.

Special occasions of Caodaism include God-worshipping days in the 1st and 8th month of Lunar Calendar. On such days, the Holy See organizes special festivals with grave visits, many booths on historical and religious events and the display of the biggest fruits in Southern Vietnam. Due to the specialty and the religious feature, such annual festivals always attract a large number of believers and tourists. 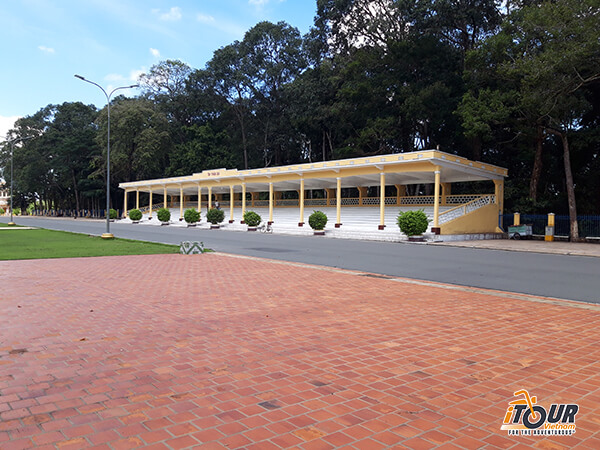 This is where people gather to enjoy the Dragon Dance and Lion Dance in the Mid-Autumn Festival.

Read more on Dos and Don’ts in Vietnam.

Toa Thanh Temple is an important religious site of Vietnam with unique architecture and sacred religious spirit. Undoubtedly, it is like the house of Caodaists and the interesting attraction for any religious person or architecture lover.

Find the best hotels to stay in Tay Ninh:

© Written by Linh Nguyen and Duy Trang for itourvn.com