Lesser known around the world but very popular among locals, Bun Rieu is another dish you must try on your Vietnam trip

Ingredients of Bun Rieu and How Bun Rieu is Made

Four main components to look out for in a bowl of Vietnamese Crab Noodle Soup are crab paste, broth, noodles (or rice vermicelli), and meatballs. A bowl of Bun Rieu, however, also features other participants: blood tofu/blood pudding, fried tofu, tomatoes, shrimps, dried shrimps, fried shallots sprinkled on top, and even sea snails.

Below is a breakdown of each ingredient:

Bun Rieu is a well-known dish to all locals across Vietnam, but it is believed to originate from the North, particularly from the people of the Red River Delta (Dong Bang Song Hong), the biggest delta in the North. Then it spread to the Central region and the South following the southward migration of northern natives.

The northern version of Bun Rieu is less “crowded” than that of the south, starring crab paste, tomatoes (wedged slices), fried tofu, small cubes of fried pork fat, and shrimp paste. When it gets to the Central region, Cha Lua (cold cuts) are added. Then when it gets to the South (to be more exact, the Mekong Delta region), blood pudding, pork ribs, pettitoes, squids, dried shrimps, and even sea snails (Oc Buou) are added. Another note is that besides shrimp paste, southern people may also use tamarind to season the broth.

We have regional Bun Rieu’s of North, South and Central Vietnam with varied components as just mentioned above. But essentially, based on the main ingredients in the bowl of Bun Rieu, we have the following varieties:

Although there are several options of Bun Rieu restaurants and street vendors in Ho Chi Minh City, the following 3 Bun Rieu restaurants offer decent, tasty Bun Rieu (we have tasted and testify this). They also offer a varied menu of Vietnamese drinks and desserts, if you fancy trying.

Bun Rieu Nha looks very discernible from the outside. The colorful and warm decor inside. And the taste of its Bun Rieu didn’t disappoint. It is one of the rare places we truly feel the authentic taste of crab paste, creamy and savory. Meatballs are simple but done right, again very “real”, unlike the mediocre processed meatballs you may stumble into in some insensitive Bun Rieu street vendor. Convenient location in the city center, so definitely a good place to sample Vietnamese Crab Noodle Soup. Bun Rieu Nha from the outside A bowl of Bun Rieu done right. Simple and mouthwatering 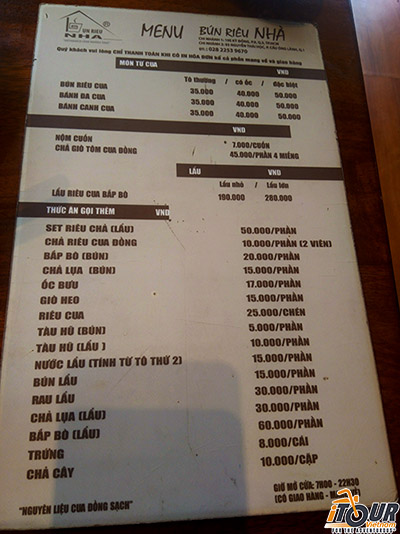 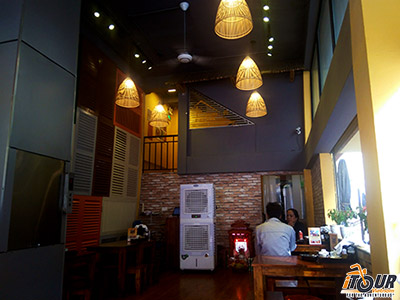 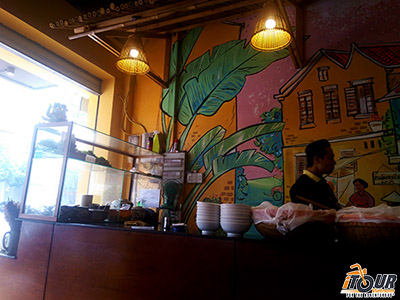 Colorful and warm decor inside

Nestled in a big alley branch from Ky Dong Street, District 3, Bun Oc Thanh Hai offers the special sea snails Bun Rieu and also regular Bun Rieu. We were pleased with the taste of all ingredients in a bowl of Bun Rieu Cua Oc of this restaurant: the broth, the crab paste, tomatoes, sea snails. And unlike most other Bun Rieu restaurants, you don’t have any tofu or meatballs or pork cold cuts in your dish, but you can order a serving of fried tofu at VND 10,000 if you want. The frequent comes and goes of delivery staff is a testament to the quality and popularity of dishes here. 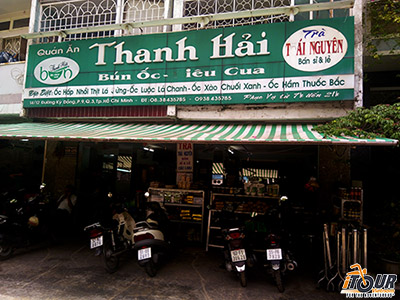 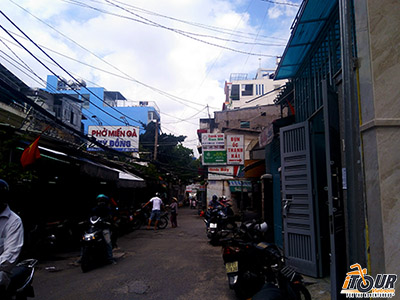 Bun Oc Thanh Hai is nestled in a large alley This restaurant in District 10 offers Bun Rieu Tom Cua (regular Bun Rieu + shrimps). As opposed to the two restaurants above whose tastes gravitate towards the northern style, the broth at this restaurant is sweeter and more southerners-friendly, although we find it a bit less sophisticated and satisfying as the broth of the other two. Since it follows and reflects the southern style, the crab paste has a firmer texture featuring ground meat and egg yolk. You can try the northern way at the other two restaurants and the southern way at this eatery to find out which one is your preference. 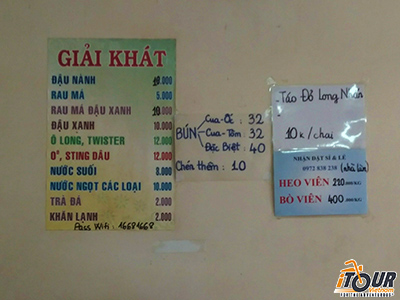 A southern-styled bowl of Bun Rieu

Try Bun Rieu, one of the most popular noodle soups among locals, to know what it tastes like to have crab paste, noodles, savory broth, fried tofu, meatballs, and so on in one dish!

Join our Food Tours in Ho Chi Minh City to try many more delicacies of Vietnam!

© Written by Vy Thai for itourvn.com

Such a detailed blog. I love learning about my favorite Vietnamese food

The one in Ben Thanh market is the best in town