The Vietnamese word for "district" can be either "quan" or "huyen". While "quan" has a fancy, cosmopolitan feel to it, "huyen" gives off more rustic connotations. Binh Chanh falls into the latter category, often referred to as "huyen Binh Chanh". But rather than being a dull countryside, Binh Chanh District harbors great potentials. From unique homestay to historical and cultural attractions, the charm of Binh Chanh goes way beyond many locals’ expectations and assumptions, not to mention foreigners’.

As a suburban district in Ho Chi Minh City, Binh Chanh has neighbors that are, for the most part, suburban as well, namely Hoc Mon District to the north, Binh Tan District, District 7, District 8 and Nha Be District to the east, and three districts of Long An Province to the south and west. With such a location, Binh Chanh District is likened to a pivotal bridge of trade and communication between the Mekong Delta region and the socio-economic centers of the eastern half of South Vietnam. The crucial arteries of Binh Chanh District are Quoc Lo 1A (1A Highway), Nguyen Van Linh Highway, Tinh Lo 10, and Quoc Lo 50.

However, the odds seemingly are not in Binh Chanh’s favor when it comes to nature. The district boasts an extensive number of rivers and channels (10 of which are major ones), yet pollution of varying levels plagues these inherent watercourses due to their position as the lower reach regions. Most pollution stems from poorly treated sewage discharged by major industrial corporations in the city. There are forests in the district too, but their area is quite meager.

The soil is another significant talking point. With very poor soil texture, containing high levels of minerals that are hostile to farming, planting fruits, flowers, and agricultural production, the economy of Binh Chanh District relies most heavily on the industrial sector, followed by commerce and service sector, while agriculture sector accounts for only a meager percentage.

Nevertheless, in terms of socio-economic, Binh Chanh District is the home to a rich and diverse culture featuring the most popular ethnic groups such as Kinh People, Cham People, Khmer People. Visiting Binh Chanh District promises an intriguing cultural experience if one cares to explore.

How to Get to Binh Chanh District

The distance between Binh Chanh District and Tan Son Nhat Airport is 22 kilometers, so the traveling time will vary between 1 hour and 2 hours depending on the means of your choice and the road traffic.

Cost: US$1 (only bus fares included, may cost an extra amount if you take a cab from Tan Son Nhat Airport to West Station).

More on how to catch a bus in Ho Chi Minh City.

Travel time is significantly less, around 1 hour only because no wait or finding a bus stop is required. However, the fare will fluctuate between US$8 - US$13.

Binh Chanh District used to be an important military base area, so historical sites are a specialty here. Among them, Lang Le - Bau Co and Rach Gia are the most prominent ones. The concrete structures and sculptures in these sites were in fact built after the war, by the district authority and the residents, as an expression of gratitude to the bravery and the sacrifice of Vietnamese soldiers. Also, there are cultural sites that have been around since the early 19th century, such as Tan Tuc Temple.

Along with the landmarks of history, Binh Chanh District has also seen the birth of new and tantalizing entertainment areas, mostly as private businesses. Fishing lakes, amusement parks and breathtaking resorts in Binh Chanh are really worth a visit. 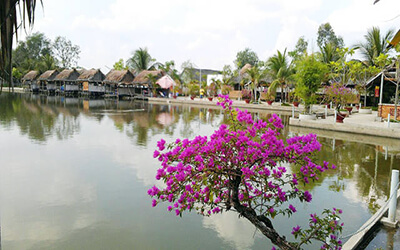 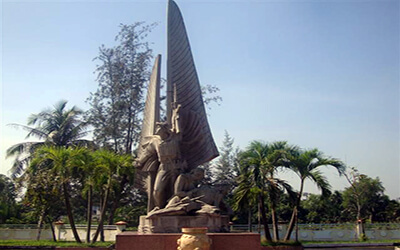 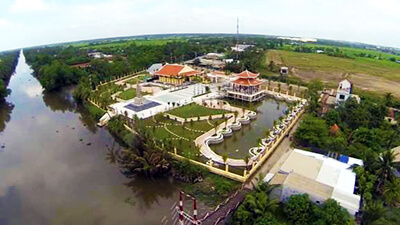 Despite being a suburban district, Binh Chanh is not lesser to any of its downtown counterparts as far as food and dining are concerned. The omnipresent restaurants and coffee shops here are go-to spots for family gatherings, meetups and after-work parties, on weekends and weekdays alike.

To enjoy the best of Binh Chanh cuisine, simply go to Pham Hung street. See the table below for more details.

This may be the one aspect that Binh Chanh is quite lacking in compared to other districts. Perhaps, this is one of the reasons why residents there lean towards online shopping and relies much on shipping services, which coined a popular joke going around on social media, that shipping to Binh Chanh can cost as much as international shipping.

Binh Chanh Market is the biggest and busiest one in the area. And unlike Hoc Mon District which seems to be more rustic, Binh Chanh has a modern Centre Mall in Pham Hung Street. 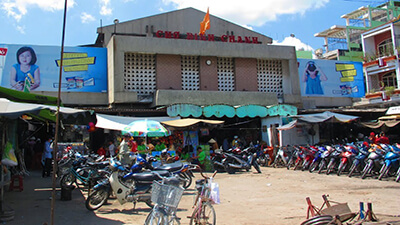 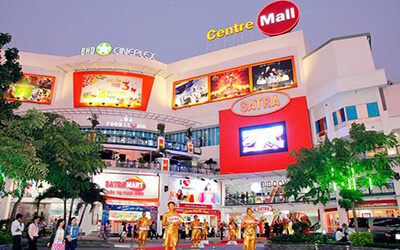 Again it might not be the place where you turn to for wild parties or crowded bars and clubs, but the bountiful businesses including street eat carts, open-air restaurants, and cafes that stay up late to serve customers can always give you a lovely peaceful night on the outskirts of Ho Chi Minh City.

If you’re fascinated by the other side of the dynamic and modern Ho Chi Minh City, check out this Unseen Saigon Tour.