Want to cruise down the Saigon River on your travel? Check out the Bach Dang river bus to Thu Duc, a pilot for a new kind of public transportation in Ho Chi Minh City to reduce the traffic load on the streets. It is currently the only route of the river bus, so if you are looking for convenient transportation, this type is not recommended. However, if you want to go sightseeing and see Ho Chi Minh City from a new perspective, it makes a great choice. Buy the ticket in the booth on the left of the front gate. At this booth, you can also find the schedule and route map.
Ticket price: VND 15,000 one-way. Free for seniors over 70 and for children under 1 meter in height. 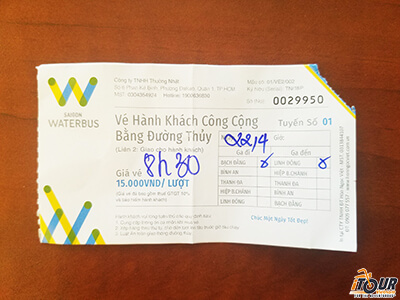 There are 6 trips per day from Bach Dang Port. The first will leave at 8:30 AM and the last will leave at 5:40 AM and back to the dock at 7:15 PM. You should show up at the port at least 15 minutes before departing and buy the ticket and return ticket early as they may be sold out. Before getting on board, the guard will ask for your ticket and give it back to you after checking. There is no number on the ticket so you can choose any seats. There are 72 seats in the air-conditioned cabin, but you can also sit in the aft of the boat to enjoy the view and fresh air. The boat is equipped with alarms, extinguishers, and life jackets, along with their how-to-use instruction in case of emergencies. A life jacket is put under every seat A view from the cabin's window and the aft deck

The bus will stop for about 5 minutes to drop off and pick up guests at each dock.

In District 2, which is known as the “expats town” where a lot of expats choose to reside and hang out, there are a lot of modern attractions and entertainment such as the Factory Contemporary Arts Center and Saigon Outcast. Binh An Dock in District 2

If you get off the boat at the dock in Binh Thanh District, you can find a lot of recreational areas like Binh Quoi Theme Park and Restaurants. But if you choose to get off in Thu Duc District - a district to the northeast of Ho Chi Minh City with the total area about 6 times that of District 1, you may find it a challenge to get around the town. There are some bus routes connecting the attractions in Thu Duc. However, some of them are quite close to one another, while others are quite far. If you want to make as many stops as possible, you should get a local guide to drive you around. Some attractions near the port (under 5 km) are Hue Nghiem Pagoda, Thu Duc One Pillar Pagoda, Quang Duc Monastery, Van Duc Pagoda, Tam Ha Church, Thu Duc Market, and Vincom Thu Duc. Further sites (above 5 km) that worth to visit are Thu Duc Produce Market, where you can buy fresh tropical fruits, and Suoi Tien Theme Park, a place to cool down the heat with water sports and activities. Getting back to District 1:

By river bus: You can buy the ticket back to Bach Dang in advance at the ticket booth in Bach Dang Port, or buy it at the port where you get off. This would cost you another VND 15,000.

By bus: The public bus is your cheapest option (VND 6,000 if you take one bus, and VND 12,000 if you take two buses) to get back to the city center. You can find suitable bus routes with the bus map app. However, you will have to walk and find your way around for the bus stops. You would need 3G to use the map on your phone, read more here on Where to buy a SIM card in Ho Chi Minh City.

If you get tired from the bustling city center and want to try a cruise along Saigon River, the Bach Dang river bus to Thu Duc will be a new, fun, and affordable experience. As the docks of the river bus are quite far from the main attractions of the districts, it would be better to have a local guide to pick you up and take you around. But there are also options for transportation like public bus, taxi or motorbike taxi if you want to travel on your own.

Get your bus ticket online: