Drinking alcohol is popular in Vietnam that it’s virtually a part of the culture here. Saying that Vietnamese like beer is a massive understatement, we deeply love it. The act of drinking alcohol impregnates every fabric of society. Vietnamese drink alcohol on many occasions or even on no special occasion at all. Like many other countries in the world, Vietnam has a serious binge drinking problem. But we digress.

In Vietnam drinking alcohol is a tool of socialization with strangers, having fun with friends. One might say alcohol tastes better with companions. Vietnamese love drinking so much, they even have a word for it. The act of mass drinking with many companions is called "Nhau’’. Vietnamese are friendly people. They would love to share a drink or two with foreigners – tourists. If you came to Vietnam and wished to immerse yourself in this vibrant and drunken culture, feel free to have a look at our list of some alcohol in Vietnam. Maybe you can learn a thing or two about the drinking culture here.

In Vietnam, beer is not only used as a fun party drink but can also be used to make great dishes like tom hap bia (shrimp steamed with beer). Now find out your favorite brand of beer to drink or cook with.

Tiger Beer could be considered the national beer of Singapore. It is also among the most popular alcohol in Vietnam. It is a pale lager with 5% abv (alcohol by volume). The ingredients are selective. The barley is from Australia and Europe, the hops are from Germany and the yeast is from the Netherlands. 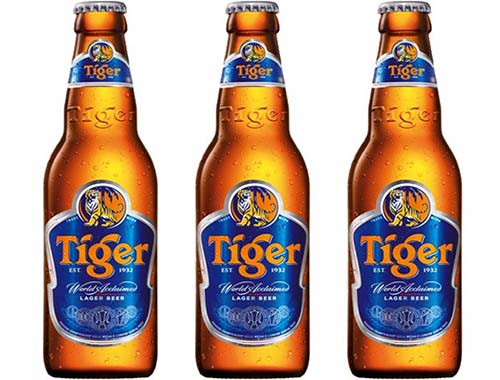 Another popular name, not just in Vietnam, but worldwide as well. Heineken is also a 5% abv pale lager. With its iconic look of the green bottle and red star, Heineken can be seen on many drinking tables in Vietnam. It is considered quite a premium beer here. 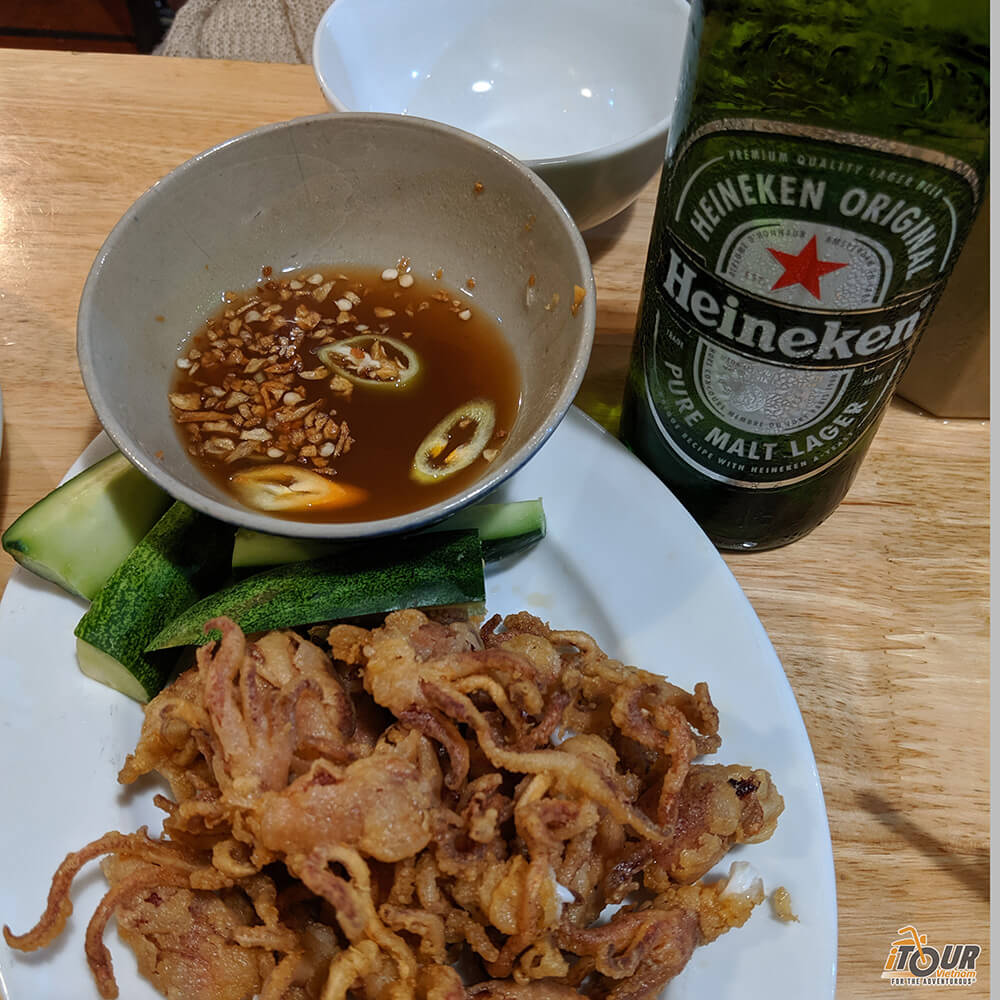 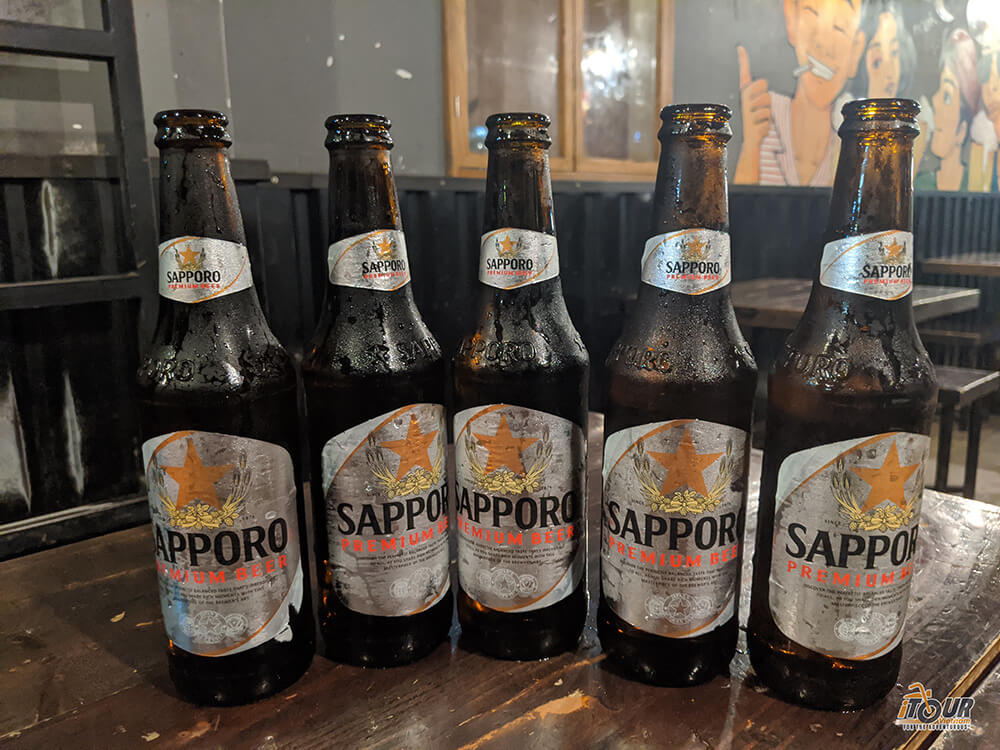 As of recently, more and more international beer brands are imported to Vietnam, such as Sapporo (Japan), Budweiser (Czech Republic), Corona (Mexico)

The company that brewed Saigon Beer was founded by a Frenchman in 1875. With the endearing name of "Saigon" Beer, this beer is quite beloved here in Saigon (Ho Chi Minh City) and the South as a whole. There are 4 types of Saigon Beer. 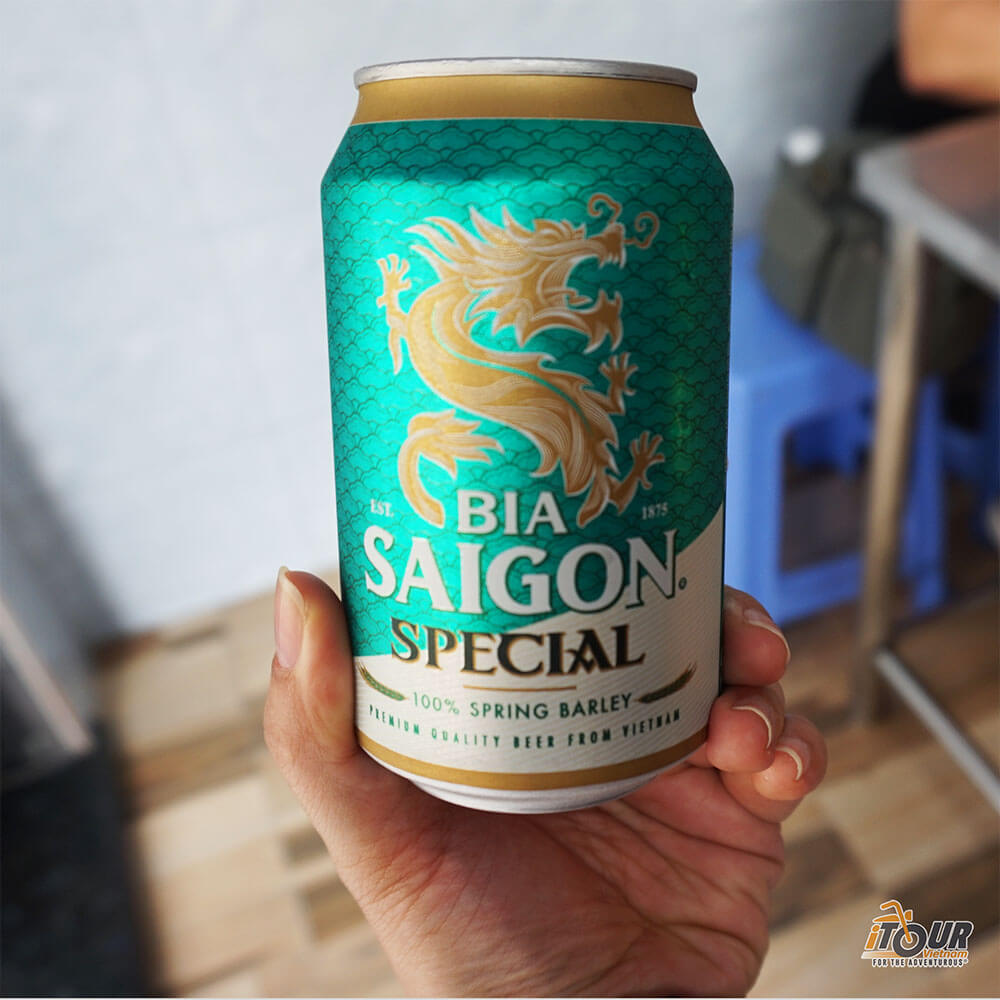 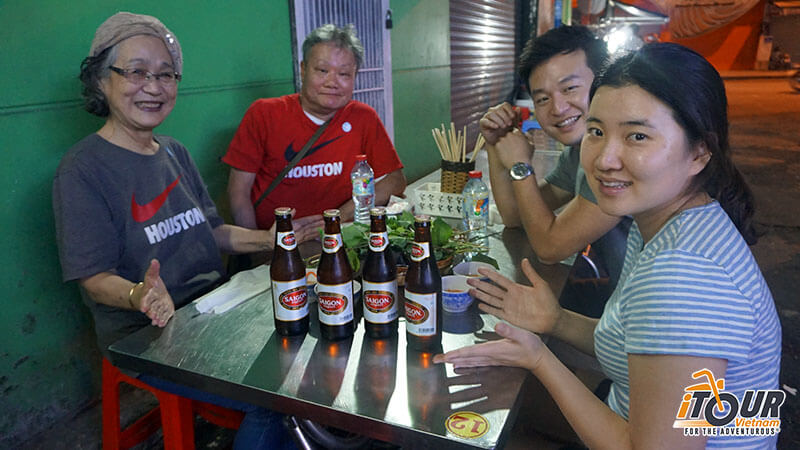 Saigon beer is widely loved by locals and tourists

This beer is a product of the same company that brought us Saigon Beer: Sabeco. The abv is 5.3%. Coupled with the bitter taste, the beer can be quite strong. 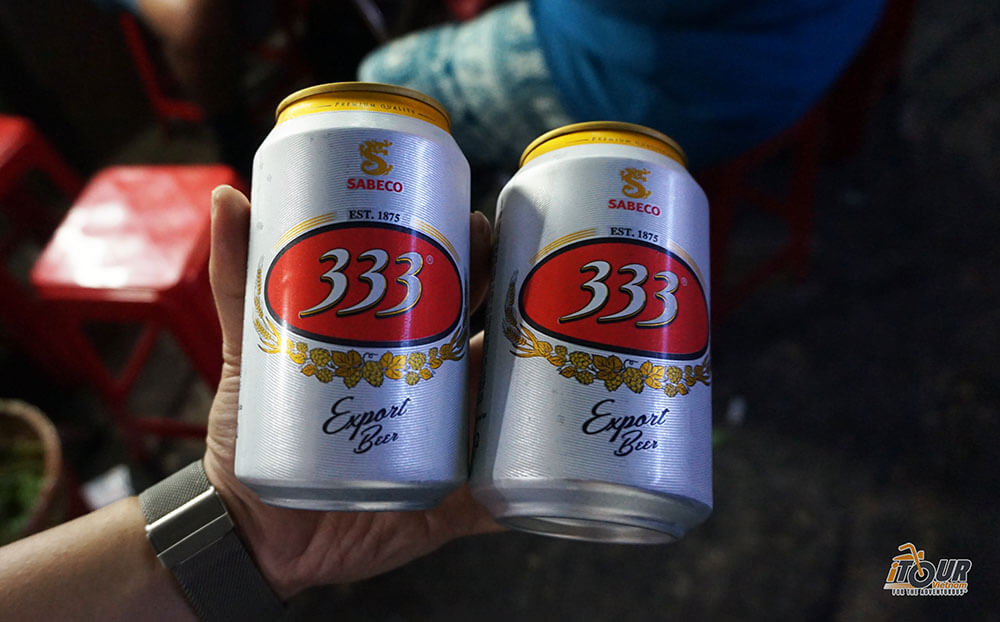 333 is more popular among the older generation of Vietnamese

Habeco – the brewing company that makes Hanoi Beer is founded in 1890. Saigon has Saigon Beer and Hanoi has Hanoi Beer. With its long history and of course the dignified name, Hanoi Beer has earned its spot as one of the most favored beers in Hanoi, appearing in any street stands, restaurants or family tables. Hanoi Beer has 3 lines. 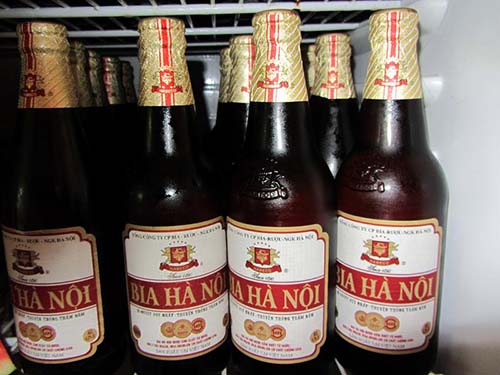 Draught Beer or Bia Hoi is a fresh, unpasteurized beer; served straight out of kegs. This kind of beer is brewed daily for consumption. The abv content is low, around 3% and the price is quite cheap, less than VND 10,000 a glass. It’s perfect for refreshing yourself from the heat and yet not getting awfully drunk. Hanoi Draught Beer is arguably the most well-known draught beer in Vietnam. 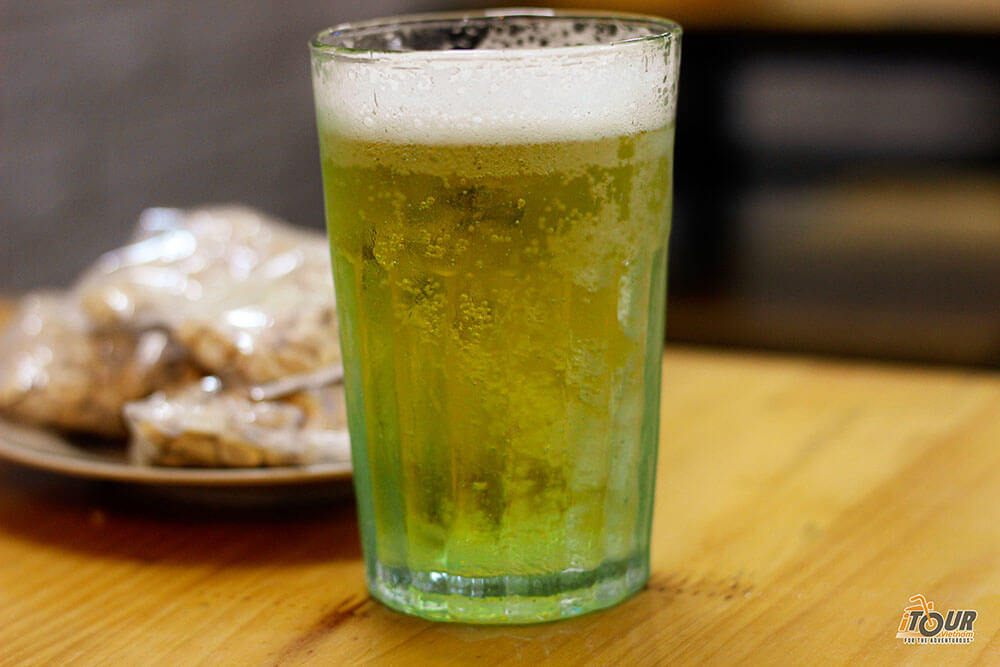 A glass of draught beer with some peanuts

Vietnam has only had craft beer for 3 to 4 years ago. Despite that short period of time, the craft beer market here is booming. Growing from a niche market, craft beer here is slowly penetrating the mainstream consciousness. The taste of craft beer is inherently different from all the other commercial beer. There are also craft beers with fruity or flowery flavors. 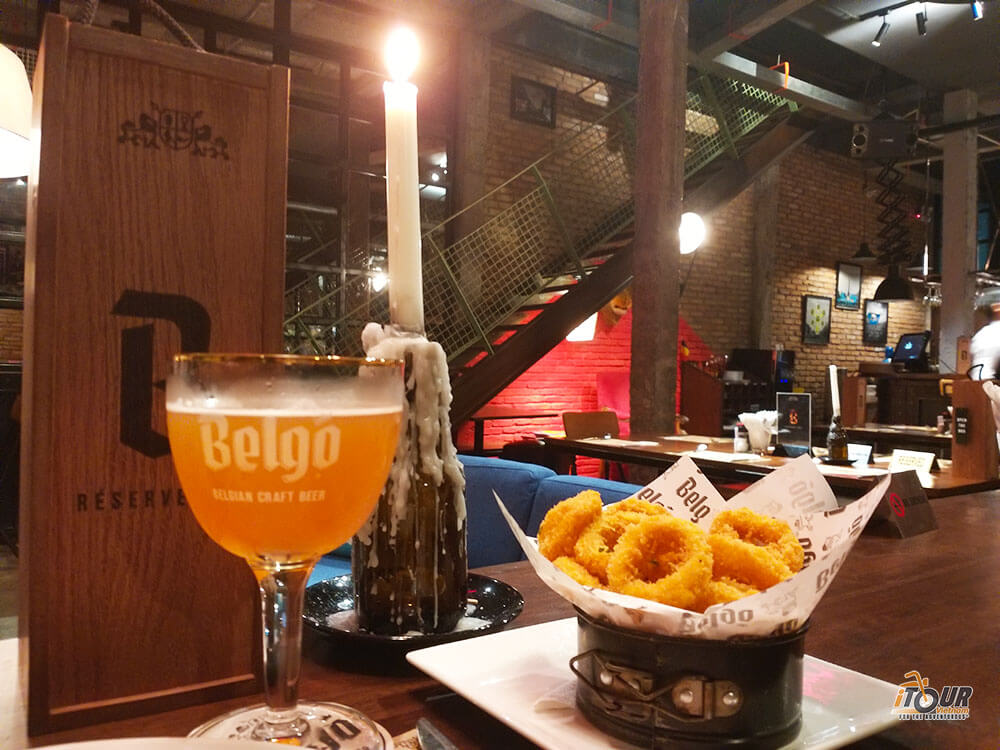 Belgo is a nice restaurant with signature craft beer

With many other names such as Ruou Trang (White) or Ruou Gao (Rice), traditional Vietnamese rice wine is a common alcohol choice for many Vietnamese. It is made from grain. The origin of the rice wine is that it was a moonshine distilled in answer to an alcohol monopoly put on by the colonial government and remained popular to this day. The liquor is a very prominent drink in the Mekong Delta Region, appearing in almost every "Nhau" table and every important occasion. The abv is quite high, around 40%, so it sometimes can be used to make infused spirits and in cooking to clean off the stinky smell of meat and fish.

Glutinous Rice Wine (or Ruou Nep) is a type of rice wine. It is made by fermenting glutinous rice with yeast. The color of this alcohol depends on the types of glutinous rice used. And depending on the different ways it could be prepared; the final product can be drunk as a liquid or eaten as a pudding. It is a tradition to drink Ruou Nep on May 5 (Lunar Calendar), which is the Doan Ngo Tet, also known as Parasite-killing Festival. It is based on an old belief that alcohol can kill parasites dwelling in your body. 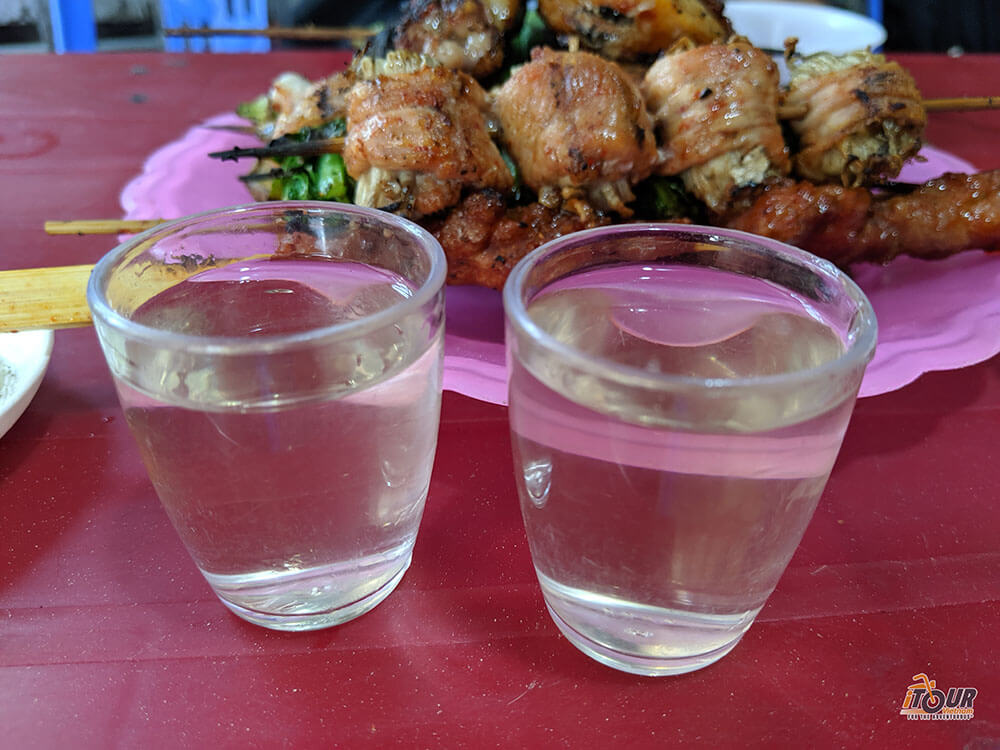 Rice wine is Vietnam's national liquor, and depending on the type of rice and the agricultural scene in each region, the people develop their own regional version of rice wine 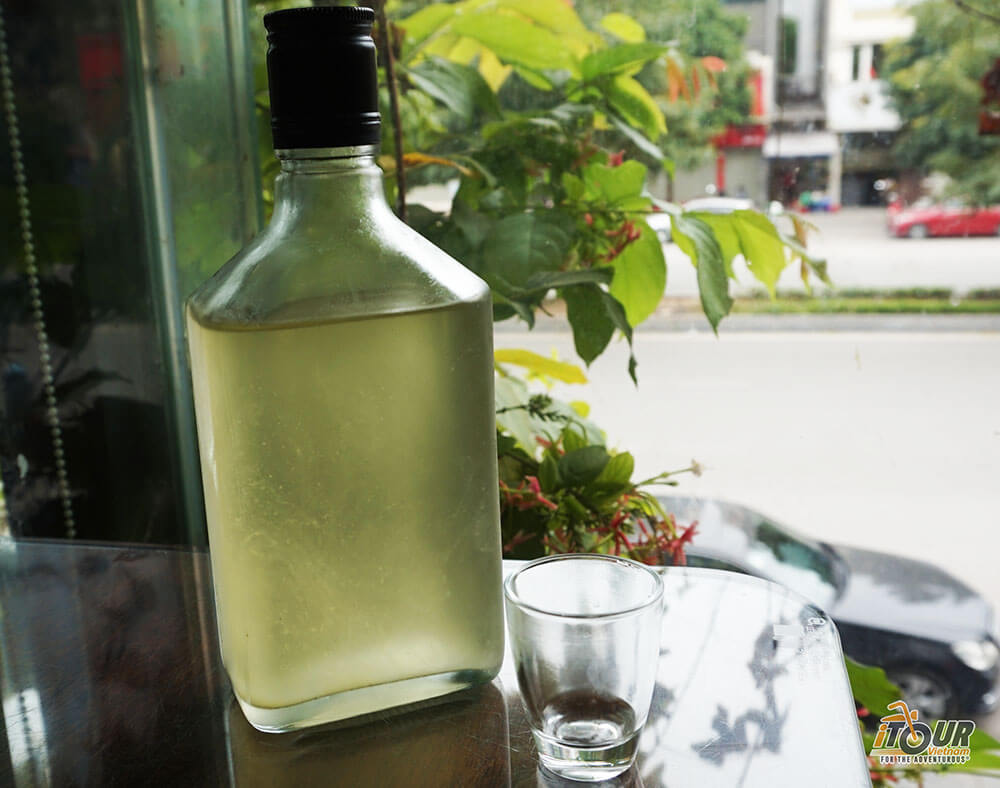 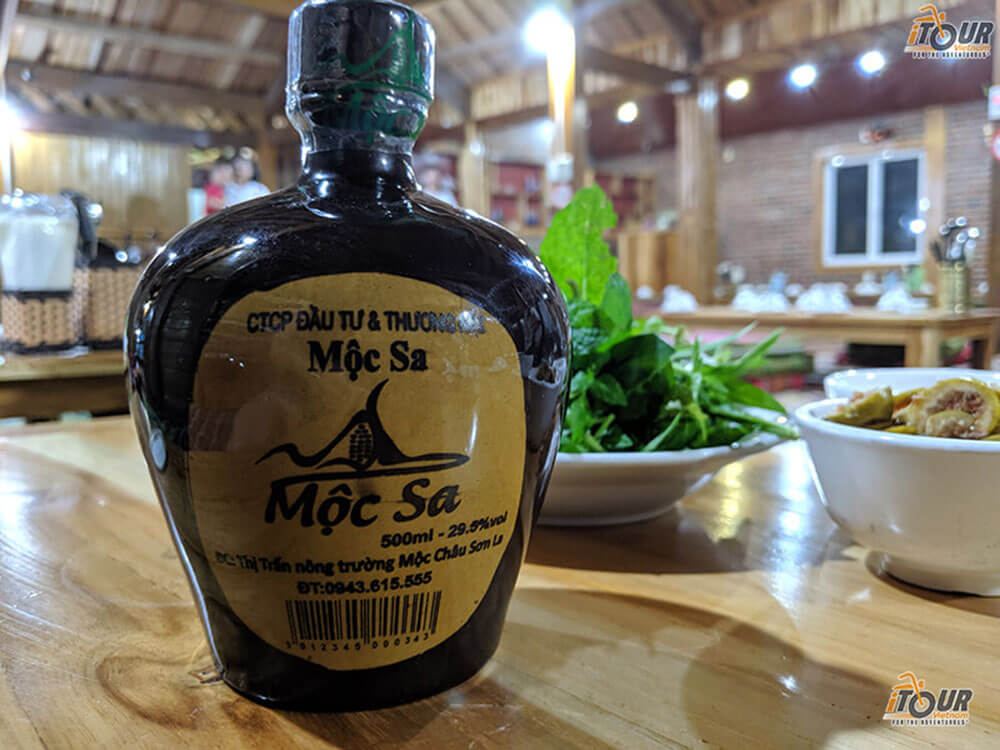 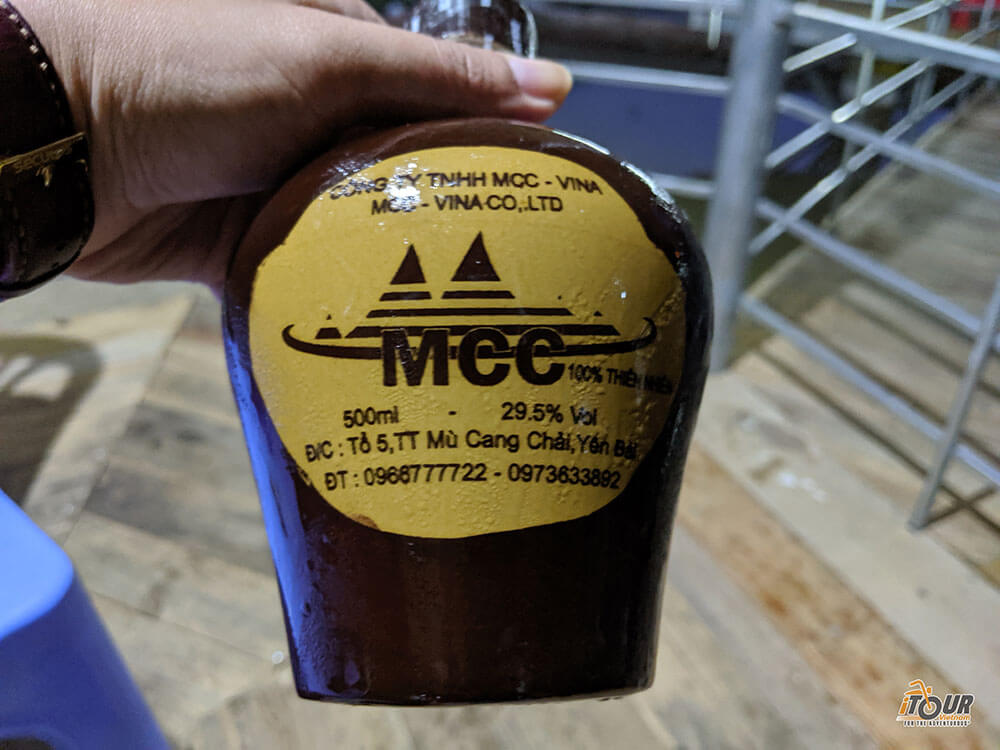 This liquor is traditionally made by the Dao people living in Mount Mau Son. It is distilled at an 800-1000m height above sea level. The special ingredients are freshwater procured from streams high up in the mountain and yeast made from 30 exotic mountain herbs. 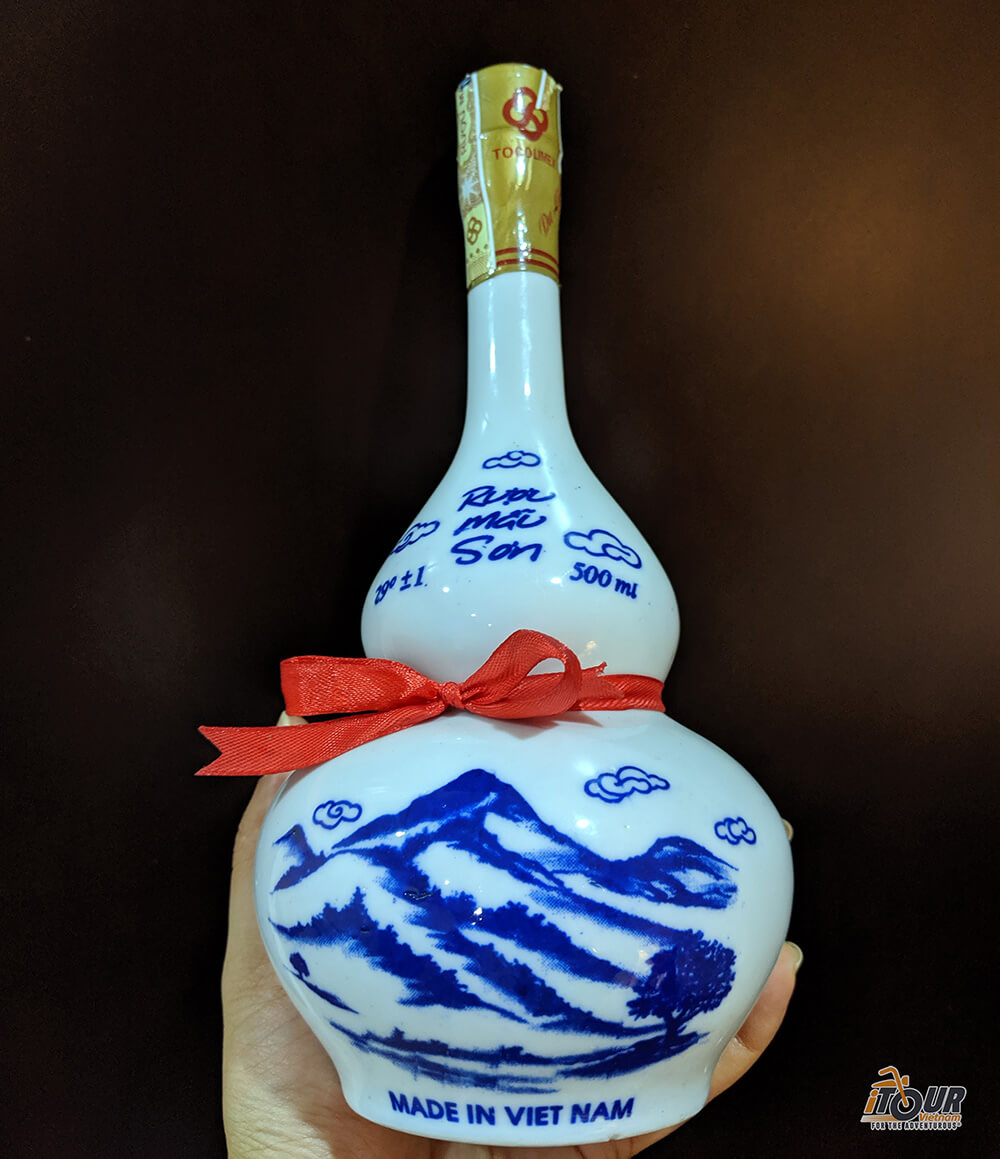 This is a type of rice wine indigenous to the ethnic minorities in mountainous areas (Tay Nguyen for example). To make Ruou Can, the fermented grain is mixed herbs then stored in a big earthenware jug. People will drink straight from the jug using long tubes. One jug of Ruou Can is usually shared by many people. Ruou Can has a special role in the culture of many ethnic minorities. It is drunk when there are guests; when there are feasts, festivals, weddings, and generally all of the happy celebrations. The drinking of Ruou Can is then accompanied by music and dancing. 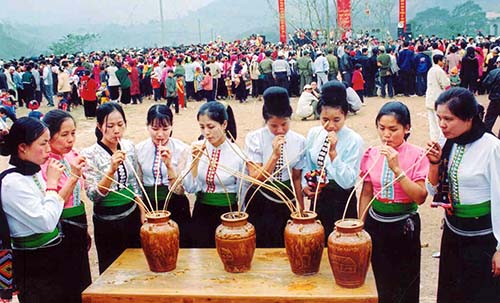 Women consuming Ruou Can together

This drink is quite a horror show at first look. Snake Wine is brewed for medicinal purposes. The processes are making Snake Wine are: First removing the innards of the snake then cleanse the snake with alcohol. Next, the snake is stored in a mixture of ginger and alcohol for around 30 minutes to get rid of the pungent smell. Finally, the snake is then infused in a jar of grain wine. There are also methods of putting an entire living snake in a jar of grain wine. Beating snake heart and snake bile can be consumed individually with rice wine in a shot glass. Ruou Ran is believed to have many medicinal properties, like help improving digestive health or blood pressure. 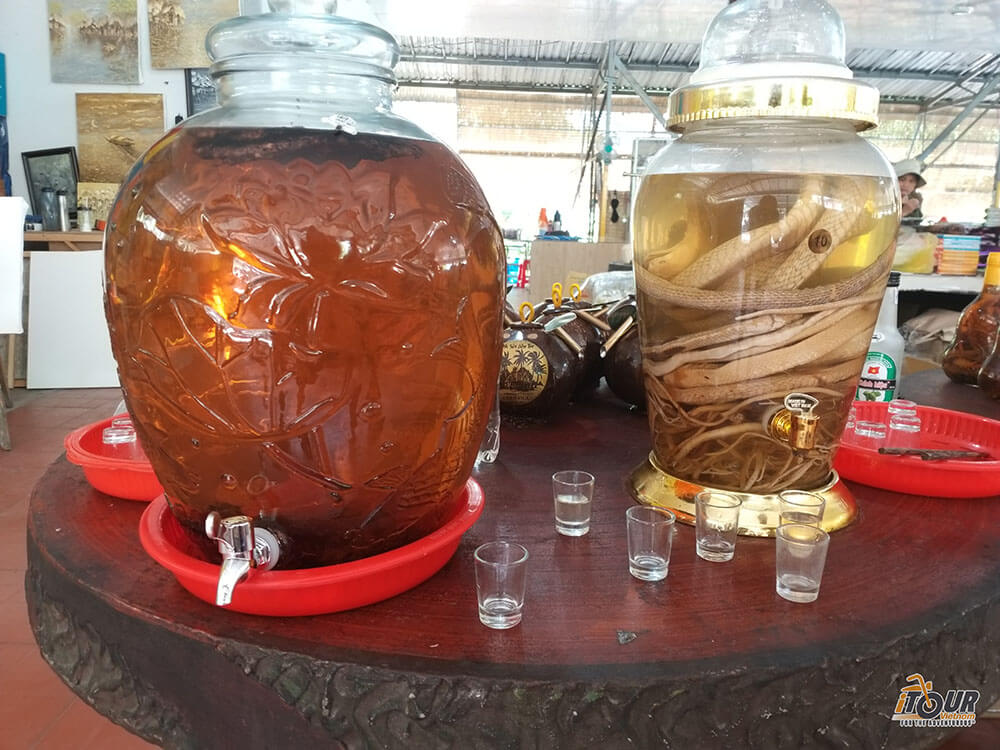 There is a broad variety of infused spirits here in Vietnam. Many herbs are discovered to have great medicinal properties so they are often infused with grain wine. Some notable herbs are ginseng, mistletoe, licorice, cinnamon twigs, Indian mulberry, etc. 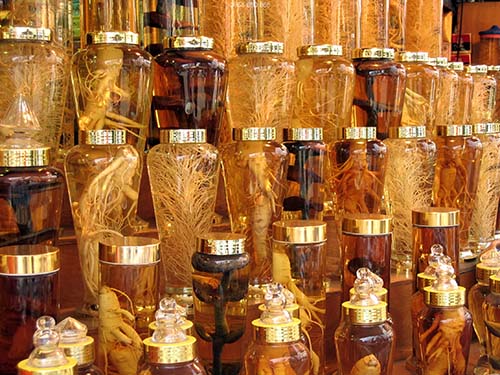 A wide assortment of infused spirits

This is a delicacy of Phu Quoc Island. It is a wine made from the fruit of the Myrtle tree. Sugar and the aforementioned fruit are the main ingredients. The fruit is quite special. The wine will taste marginally different than wine made from grape (in a good way). Its abv is 7.5%. 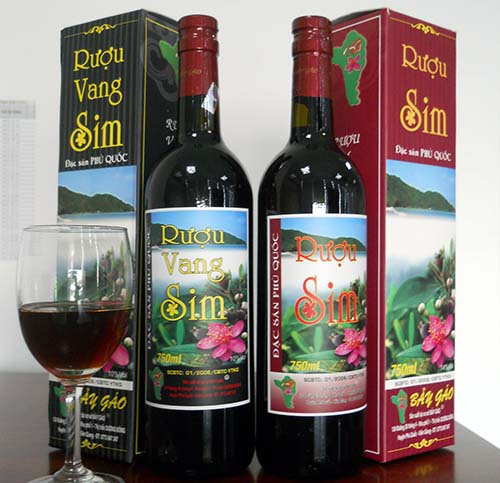 Find top-rated hotels and resorts in Vietnamese below:

In Summary of Alcohol in Vietnam

There are many kinds of alcohol in Vietnam. To try them all would probably take you more than one or two days. Exploring them would be quite a spectacle, a daring experience. If you can come to Vietnam, many locals here are friendly enough to want to grab a drink with you. But remember one thing, the legal age in Vietnam is 18 years old. Meaning people under 18 can’t buy or legally drink alcohol. Now if you are an adult with an appetite for Ho Chi Minh City adventure and foods, beverages alike, we are happy to show you the way.

Get a free quote for your Vietnam Travel Insurance:

I love trying new alcohol everywhere I go on my Vietnam trip. Not all tasted good though ^^ some were pretty strong, and some were not so nice to enjoy. But everything was worthwhile to have a taste of local wine making cultures. I'd recommend doing the same if you love wine

0 Cancel Reply
I love trying new alcohol everywhere I go on my Vietnam trip. Not all tasted good though ^^ some were pretty strong, and some were not so nice to enjoy. But everything was worthwhile to have a taste of local wine making cultures. I'd recommend doing the same if you love wine
Cancel Update Comment

I don't think the Vietnamese requires an ID to by alcohol