Hanoi - the capital of Vietnam, is a city rich in historical traditions. In the past, Hanoi - under the name of Thang Long - was the capital of many feudal dynasties in Vietnamese history. Thang Long Imperial Citadel is a place conserving those historical values, which brings visitors an opportunity to learn more about the history of Vietnam. Thang Long Imperial Citadel is a historical relic of the ancient Thang Long capital. The site used to be a royal enclosure starting from the pre-Thang Long period (VII century) through the Dinh - Tien Le period, and then strongly developed under the Ly, Tran, Le and Nguyen Dynasty. This massive architectural work was continuously developed through many historical periods and went through varying war destructions. Nonetheless, besides being the most important monument in the system of Vietnamese relics Thang Long Imperial Citadel is also a cultural heritage of the world - proudly recognized by UNESCO. Through each king's reign under the Ly, Tran and Le dynasties, Thang Long Imperial Citadel was continuously renovated and expanded, along with new palaces and royal gardens being established.

When the war between Mac and Le broke out, Thang Long Imperial Citadel was all tumbledown. In 1585, a large-scale reconstruction was started under the direction of Mac Mau Hop.

Thang Long Citadel from the Ly dynasty was built with the three-citadel structure: the outer citadel is Dai La citadel, the middle is Royal Citadel, and the inner is Forbidden City. Over time and events of history, Thang Long Citadel has had many changes and distortions, but so far the above-ground, underground, revolutionary historical relics, architectural art relics,... can still be seen. They form a system of remnants that are considered to be the most important in the system of ancient, middle, near-modern, and modern urban areas relics of Vietnam.

What to See in Thang Long Imperial Citadel

From the main gate at 19C Hoang Dieu, tourists can visit the courtyard of Doan Mon Square, Doan Mon Palace, Kinh Thien Palace, D67 House, and Tunnel, Hau Lau Palace. Then go through the road with special lights system installed to visit the archaeological site of 18 Hoang Dieu in two areas A and B with many architectural relics such as the palace traces, citadel sections, ancient wells...

Doan Mon is the innermost door leading into the Forbidden City - the residence and workplace of the king and the royal family. Doan Mon Gate was built from the Ly Dynasty with the name of Ngu Mon Lau. Doan Mon is a gate which played a crucial role in the structure of the Imperial Citadel. Between Doan Mon Gate and Kinh Thien Palace is Long Tri, where sacred religious and political ceremonies were held. Doan Mon Gate was built horizontally in the U-shaped structure, from East to West of 46.5m long, from South to North of 13m long and the height of 6m.

As the center relics in the whole Thang Long Imperial Citadel, Kinh Thien Palace was built in 1428 and was once considered "one of the wonders of An Nam architecture". However, the palace was destroyed by the French colonialists in 1886 to build the artillery command headquarters, and only the foundation remains. The signature dragon's head need support due to the detoriated structure

Amid the ancient feudal structures, D67 House and Tunnel relics are more connected to modern military history. In order to ensure the safety of the headquarters of the Vietnam People's Army during the Vietnam war, the Ministry of Defense decided to build a tunnel and a permanent house in Zone A of Thang Long Imperial Citadel. Walk to the north of Kinh Thien Palace, and you'll be able to have a closer look at this site. D67 is a massive tunnel located under the connecting ground between the Kinh Thien Palace and D67 houses. The two paths going down to the tunnel start from the offices of General Giap and General Dung in D67 House. They are 2-meter wide tubes with 45 steps of staircases. Going down 10 meters more, visitors will see the official system of the underground headquarters consisting of four rooms of 50 square meters, sharing a corridor on the right.

Hau Lau Palace is also called Tinh Bac Lau, Princess Palace, Pagode des Dames, or Hau Dien Palace. This building was built in the Nguyen Dynasty (1821) as a resting place for the beautiful women in the king's entourage when traveling from Hue to the North. This work was destroyed in the late 19th century and later was rebuilt by the French. Hau Lau Palace is hidden inside rows of green trees

Hanoi Flag Tower was built in 1812 under the reign of King Gia Long and was considered one of the most impressive military structures at the time. The Flag Tower is 60m high, including all the three parts (base, body, and watchtower) of the tower, with the square foot stand occupying an area of 2007 m². There are three floors, and each has a flower wall surrounded by patterns. From the ground up to the second floor, there are 18 steps on the east and west sides. There are 18 steps at both gates towards East and West from the second floor to the third floor. The third level has four gates of East, West, South, and North and with 14 steps from the bottom to the top. Although the tower used to belong to the imperial complex, it is now located in the Vietnam Military History Museum in Hanoi - which is only a short walk from the Thang Long Imperial Citadel site. You don't have to pay if you only want to witness the ancient tower. However, if you want to visit the museum, one ticket will cost VND 20,000. 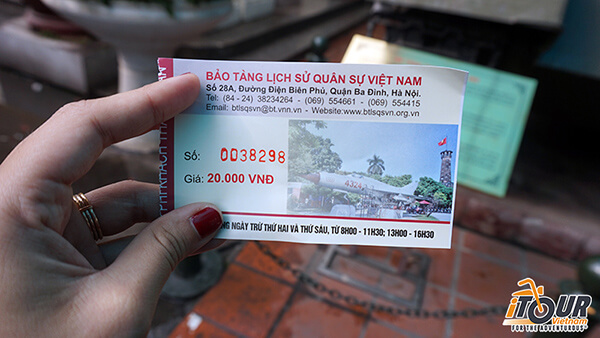 Details of the architecture 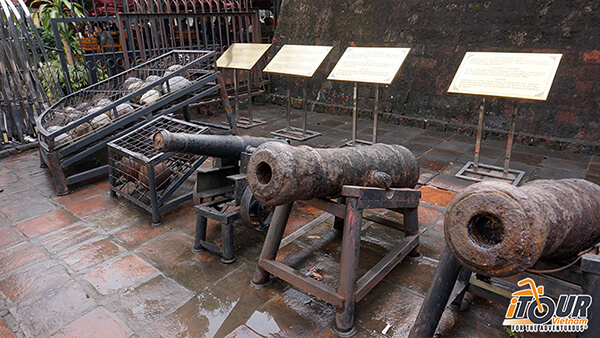 Cannons from the Nguyen dynasty placed under the tower

The relic site is in the West, about 300m away from Kinh Thien Palace and about 170m from Doan Mon Gate. This covers the area of 4,530 ha (45,300 square meters) and was excavated from December 2002, delineated into 4 zones, named A, B, C, and D. Here, many traces of ancient works such as foundations of wooden buildings and many kinds of valuable relics, including architectural decoration materials, ceramics, metal...were discovered. Many priceless relics were discovered here.

How to Get to Thang Long Imperial Citadel

Visitors can easily get to Thang Long Imperial Citadel by various means of transport such as motorbike, bus or even on foot.

See A Guide to Getting around in Hanoi

• By bus: Bus 22 has a stop right in front of the Thang Long Imperial Citadel.

Thang Long Citadel is a historical site, so when visiting, visitors should not pay attention to their outfit, not wearing too casual and skin-showing ones.

In Thang Long Citadel, belongings allowed to carry inside is strictly controlled, so you should avoid bringing objects that are considered weapons or substances that cause fire and explosion. In addition, keep in mind that ultra-light flying devices such as fly cams are also banned.

Get your travel insurance plan to explore more of Hanoi:

A Visit to Vietnam Women's Museum in Hanoi

Must-see Temples and Pagodas in Hanoi